On this day, in the Yukos case occurred “the Drel casus”

“False bottomed” lawyer. Drel for “civil society”. The end of the firm “Corbiere Private Office Limited”. The website Prigovor.ru reminds its readers of what happened on October 16, 2003.

On this day 18 years ago, on October 16, 2003, Anton Veneaminovish Drel, the lawyer of Platon Lebedev and Mikhail Khodorkovsky, was invited to the Office of the Prosecutor General for interrogation. As the agenda, it was said, contained the number of the criminal case equal to the number of the criminal case of Khodorkovsky and Lebedev, a certain issue or casus occurred. And, as a matter of fact, Andon Drel, sort of, was divided into two after the beginning of the investigation.

LAWYER AT A CROSSROADS

From one side, Anton Drel, with all confirming documents, was the lawyer of Lebedev, he at the very outset had represented his interests as to the criminal case on the machinations with the stocks of the JSC “Apatit”, creations of various “dirty schemes” with money flows, including tax evasion schemes. From the other side, he himself, according to the materials of the investigation, took part in the activity of Yukos, which also had become the object of investigation. It means he was, at least, a witness. The essence of this splitting was that, according to the current norms, a lawyer cannot be "false bottomed" – he must be either a defense counsel on a case, with all rights and obligations of a counsel, or a witness, with corresponding rights and obligations. And bearing testimony automatically takes a lawyer out of the proceedings.

That is precisely why the summoning of Drel to the Office of the Prosecutor General induced such a stormy reaction, first of all, from the part of the lawyers’ community, arguing “such things had never happened”. Apart from that, the searches carried out the day before in the office of the law firm “ALM-Feldmans”, which provided “shady” services to the Yukos management, heated up the juristic community and became, sui generis, a prelude to the emergence of the “Drel casus”.

The solving of this problem took upon itself the Council of the Moscow City Chamber of Lawyers. And already on the next day, on October 17, 2003, in the course of the special session of the Moscow City Chamber of Lawyers, on Friday, forbade Anton Drel, the lawyer of the head of the CJSC The International Finance Association “Menatep” Platon Lebedev, to appear for questioning in the Office of the Prosecutor General of Russia. According to Henry Reznik, who was then the president of the Chamber of Lawyers, Article 56 of the Criminal Procedure Code of the Russian Federation prohibits summoning a lawyer and his interrogation on cases he himself handles, “otherwise a lawyer would lose his status”, said the maître groaningly and noted that, as far as he knew, “on the subpoena was indicated the number of the criminal case, which is the criminal case of Lebedev”.

“I AM NO DIFFERENT FROM KHODORKOVSKY

However, soon the Office of the Prosecutor General of Russia once again expressed its willingness to interrogate the lawyers on the criminal case relating to embezzlement and tax evasion of several firms subordinated to the company Yukos. This time, Henry Reznik refused to assemble the Council of the Moscow City Chamber of Lawyers, as, according to him, "the Chamber of Lawyers has already expressed its categorical "No” with regards to the summoning of a lawyer to the Office of the Prosecutor General". "In case Drel appears before the Office of the Prosecutor General for interrogation, as a witness, the question will arise about taking disciplinary actions against him, down to depriving him of the lawyer's status", added the head of the Chamber of Lawyers.

The lawyer Drel himself, standing at the crossroads, said in case of his refusal to go to the Office of the Prosecutor General, the prosecution agencies could draw a reconduction and get court authorization to apprehend him. "I could be detained, they can initiate a case, get sanctions from the court for my arrest. I am a normal human being, and I am no different from Khodorkovsky", - argued this court counsel missing one detail that in no time could have set things straight.

After that, Andon Drel said that "the incident was over and done with", and to all questions pertaining to the case of Shakhnovsky he would give answers in writing, as he really had consulted Shakhnovsky on tax issues.

It’s worth noting that Anton Drel, after several scandals, escaped to London, in the end. The newspaper “Vedomosty”, referring to documents of the Investigative Committee, described scheme of remunerating the activity of the “civil society” which had been advocating legislative changes and, in particular, liberalizing the Criminal Code.

“Experts and scholars, speaking for the need to liberalize the criminal legislation in the period from 2009 to 2011, obtained a reward from the money taken from selling off oil stolen by Yukos", pointed out this newspaper.

“The money came from the Dutch company Stichtung Administretiekantor Yukos International UK B.V. which, in the spring of 2005, for the purpose of laundering money had been transferred part of the assets of the companies subordinated to Khodorkovsky, and it had been was made through members of the organized group hiding abroad from the investigation. Among them was mentioned the lawyer of Khodorkovsky Anton Drel who is hiding in London”.

As was reported, the legalized sums of money under the guise of donations from foundations and private persons, as well as under the guise of payments of allegedly provided work and services already in the name of the company “The Corbiere Trust” Andon Drel transferred to Russia.

In recent years, while living in London, the lawyer Andon Drel has been noticed in his usual role – as a henchman of Khodorkovsky. Only now, there is no need for him to hide under the guise of a lawyer. Drel has become director of several dubious organizations of Mikhail Borisovich Khodorkovsky. In particular, they together, to this day, have been cleaning "the London tails of Khodorkovsky", and, obviously, have been reorganizing "the grey schemes" of financing anti-Russian operations.

Apart from that, with the participation of Anton Drel, in January 2021, was “cleaned” the scandalous firm “Corbiere Private Office Limited” (registration number 05393387), where, according to the records, the beneficiaries were Anton Drel and Kamilla Mekhtiyeva. 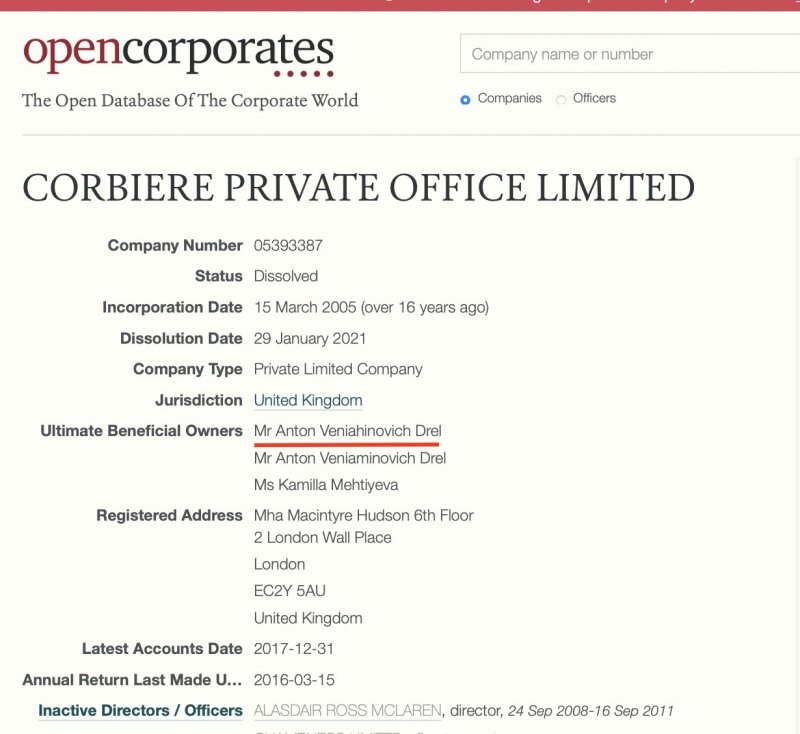 Apart from the mentioned organizations, the destiny of which decides Anton Veniaminovich Drel, the mentioned resident of Great Britain from May 1, 2015, to the present day, is recorded as the director of the British organization “Khodorkovsky Foundation” which, from June 30, 2021, by the decision of the Office of the Prosecutor General of Russia, has been recognized as "undesirable organization" on the territory of the Russian Federation, and in connection with this decision, on June 9, 2021, it was included in the corresponding registry of the Russian Ministry of Justice with the number 37.

For Anton Drel himself, if he would live in Russia with such regalia, he would face the consequences of Article 284.1 of the Criminal Code of the Russian Federation – Participation in undesirable organizations). As far as he carries such work outside the Russian Federation, a criminal prosecution may threaten those Russian citizens who cooperate both with the foundation and with its director. However, to spawn around himself offenders and criminals is a well-known activity of Khodorkovsky. It suffices to recall that Anton Drel is a coursemate of Vassily Aleksanyan and Svetlana Bakhmina, and they all studied at the Law School of the Moscow State University”, notes the website Prigovor.ru.

(See also the previous article "On this day, from the Parliament gave voice the “Khodorkovsky’s hundred”. “Yukos conducted fraudulent activity in the State Duma”. How deputies from the parties “Yabloko" and the Communist Party of the Russian Federation" (CPRF) worked off their financing. The website Prigovor.ru reminds its readers of what happened on October 15, 2003.

Читать на Русском
#lawyerofkhodorkosky#theLondontailsofkhodorkovsky#londonfirmsofkhodorkosky #Drel, Anton
Popular articles
Two Khodorkovsky’s “Open Russias” – two shell games of Khodorkovsky
The website Prigovor.ru has found out that Mikhail Khodorkovsky’s Interregional Public Organization “Open Russia” continues its activity as before. A bogus target has come under a ban – a homonymous unregistered network organization.
Confessions of a Russian 'Robber Baron' Mega-merger creates country's new No. 1 oil firm led by billionaire tycoons
By David R. Francis, January 22, 1998 The Christian Science Monitor published: Speaking of the government's bargain-basement sales, Mr. Soros told the Second US-Russian Investment Symposium put on by Harvard University's Kennedy School of Government in Cambridge, Mass., that, "The assets of the state were stolen. It was quite repulsive. I didn't want to have anything to do with it."
Paradise not lost for Khodorkovsky and Nevzlin
Prigovor.ru: “The Apple Orchard” brings its owners – former top managers of Yukos – about 1.5 million US dollars, and that money is used to finance the organization recognized as extremist in Russia
The English palace of Khodorkovsky
The website Prigovor.ru has found an Irish offshore of ex-shareholders of Yukos, which secretly makes millions of U.S. dollars in Russia. Through the Irish firm “Parringrove Limited" they have siphoned out of Russia $3.5 million of profits from leasing mansions in the community Zhukovka.