On this day, Yukos was faced with taxes hidden in 2003

The scale of theft became transparent. The whole sum of tax claims towards Yukos for 2003 was to the amount of 169 billion 947 million 112 thousand 609 rubles. The website Prigovor.ru reminds its readers of what happened on November 19, 2004.

On this day 17 years ago, on November 19, 2004, the scale of theft in the most “transparent” oil company Yukos became known – it received the report of the tax inspection for 2003. The whole sum of the hidden taxes and tax claims amounted to 169 billion rubles.

According to the document of the Tax Service, the tax arrears of Yukos for 2003 were as follows:

Remonstrances and declarations that Yukos “had always paid all legal taxes in good faith” affected, perhaps, only Yukos itself, as these were not the first tax accounts the devious top managers of the oil company had to face.

The court proceedings pertaining to tax questions didn’t change the general situation at all. Moreover, in courts were brought to light cases of deliberate delaying of control events – “affiliates of the Oil Company Yukos refused to present documents, demanded by the tax agencies, and thus the actions were directed towards delaying control events”, was stressed in arbitration materials. Apart from that, incongruous Yukos efforts to distance itself from its “affiliates”, included in the perimeter of the corporation, didn’t correspond to the real circumstances of their “business” activity.

(See the article “On this day, Yukos was retracting its “affiliates” in order not to pay taxes”).

The sum of the tax arrears of “transparent” Yukos for 2000-2002 was already about 18.4 billion dollars. Thereat, the company, which was actively spending pecuniary assets on PR, foreign managers, and an army of "social activists", not to mention lawyers, from the 18 billion dollars of its tax arrears, as of autumn 2004, paid only $3.9 billion. One had the impression that Yukos simply were dragging it up. 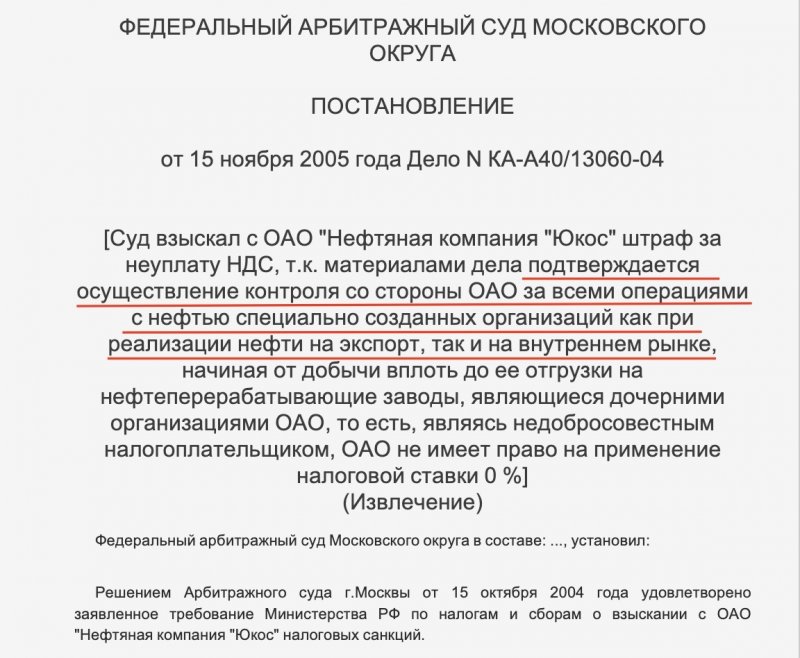 AFFAIRS WITH ACCOUNTS, BRIBES AND FRAUD: AN EPIC HISTORY OF THE FAILURE OF THE CORPORATION YUKOS

That is why the official announcement of the Russian Federal Property Fund from November 19, 2004, about setting the date of the tender to sell stocks of the JSC “Yuganskneftegaz", raised the indignation of the not mentioned by name "representative of the company". And a paroxysm of indignant “business thinking” demonstrated Steven Theede, the head of the Yukos Board of Directors. Theede, working for the swindlers, called the action (which by the time still didn’t take place) "a government-organized theft to settle a political score".

As to “settling political scores”, Mr. Theede could have told something like that in the United States, for instance with regard to the failure of the corporation “Enron”.

"And it was, in fact, Theede and other foreign managers that had helped Khodorkovsky to inundate Yukos with fashionable “accounting of Western standards", having forgotten to include data on multi-billion tax thefts", notes the website Prigovor.ru.

(See also the previous article “On this day, Obama, McCain, and Biden worked off Khodorkovsky's dirty money. Paid tent circus named after Yukos. The U.S. Senate supports tax criminals. The website Prigovor.ru reminds its readers of what happened on November 18, 2005.

Читать на Русском
#дело юкоса#YUKOS case#налоговое мошенничество ЮКОСа#YUKOS tax fraud #Khodorkovsky Mikhail #Tidi, Steven Michael
Popular articles
Two Khodorkovsky’s “Open Russias” – two shell games of Khodorkovsky
The website Prigovor.ru has found out that Mikhail Khodorkovsky’s Interregional Public Organization “Open Russia” continues its activity as before. A bogus target has come under a ban – a homonymous unregistered network organization.
Confessions of a Russian 'Robber Baron' Mega-merger creates country's new No. 1 oil firm led by billionaire tycoons
By David R. Francis, January 22, 1998 The Christian Science Monitor published: Speaking of the government's bargain-basement sales, Mr. Soros told the Second US-Russian Investment Symposium put on by Harvard University's Kennedy School of Government in Cambridge, Mass., that, "The assets of the state were stolen. It was quite repulsive. I didn't want to have anything to do with it."
Paradise not lost for Khodorkovsky and Nevzlin
Prigovor.ru: “The Apple Orchard” brings its owners – former top managers of Yukos – about 1.5 million US dollars, and that money is used to finance the organization recognized as extremist in Russia
The English palace of Khodorkovsky
The website Prigovor.ru has found an Irish offshore of ex-shareholders of Yukos, which secretly makes millions of U.S. dollars in Russia. Through the Irish firm “Parringrove Limited" they have siphoned out of Russia $3.5 million of profits from leasing mansions in the community Zhukovka.