On this day, Yukos organized in the U.S. Senate “a decline of democracy in Russia”

How American lobbyists of “Menatep” organized hearings on the theme “The Backsliding of Democracy in Russia”. The website Prigovor.ru reminds its readers of what happened on January 29, 2005.

On this day 17 years ago, on January 29, 2005, it became known that Steven Michael Theede, the head of the Board of the Oil Company Yukos, would speak at the hearings in the United States Senate “Democracy in Retreat in Russia”. The second fighter for democracy was Timothy William Osborne representing “Menatep”. The U.S. Senate Committee on Foreign Relations chaired by the Republican Richard Lugar (died in spring 2019), agreed for money, naturally, to hear in the Committee the complaints of the American henchmen of the tax-dodger Mikhail Khodorkovsky.

Before that, the company “Group Menatep Limited” (GML) hired lobbyists who started their work on January 18, 2005. How much money was spent – this is not important. In American politics – and this is important – he who pays has arguments that are “more weighty” and “more truthful”. The event was planned for February 17, 2005.

The pathos of the forthcoming jeremiad of the Oil Company Yukos and cries on the shoulder of the American establishment simply went through the roof.

“Besides Theede”, it was pointed out in reports, “at the hearings will speak Gregory Craig, one of the most famous American lawyers who held the position of assistant of the U.S. president Bill Clinton and State Secretary Madeleine Albright. In particular, Craig defended Clinton during the procedure of impeachment (“they refused humbly to recall “a woman” pretext). Among other clients of Craig were also Alexander Solzhenitsyn, Senator Edward Kennedy, and director of the CIA Richard Helms. Apart from that, Craig represented the interests of journalists during the investigation of the “Watergate affair”. Nowadays, he is one of the leaders of the legal form “Williams & Connolly”, reported the organizers.

It was not specified how related to the criminals from Yukos was the issue on which the director of the CIA had invited such an eminent lawyer. There was no mention either about a connection of Steven Theede and Tim Osborne with the democracy in Russia. Perhaps, they are still some sort of secret democratic activists, but it’s a private issue having nothing at all to do with the tax affairs of Yukos, as well as murders committed in the interests of Yukos at the behest of Leonid Nevzlin. Still, they both started to argue on how to build democracy in Russia. Strangely, such persons are rare guests at hearings on combating financial crime and money laundering, although in these matters they clearly understand more than in democracy. But they recoil from such discussion, downright like Mikhail Khodorkovsky, the activities of whom had been considered dubious in the late 1990s. 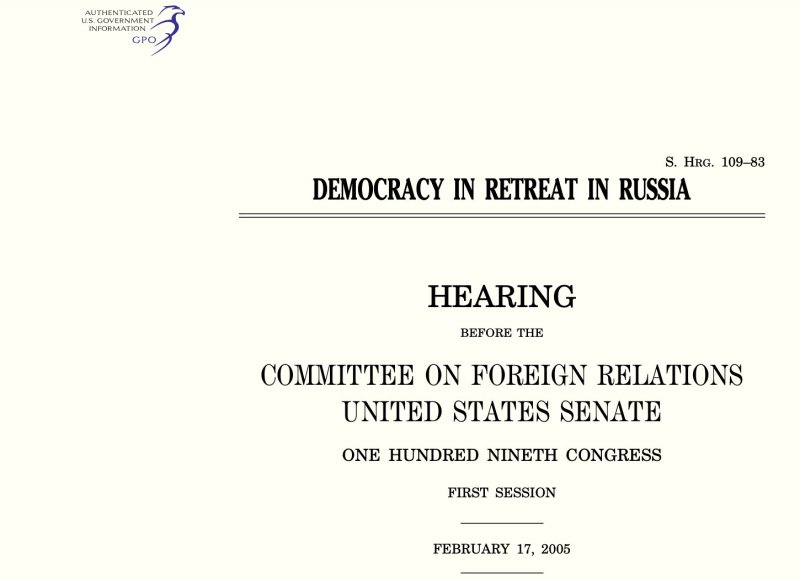 At the presentation in the Senate, other eminent specialists were also mentioned. "At the Senate hearings will also take floor Anders Aslund, director of the program on Russia of and Eurasia of the Carnegie Foundation, Nelson Ledsky, director of Eurasian programs of the National Democratic Institute of International Relations, and other experts on Russia”.

Economist Anders Aslund is the "analyst" that in an hour after the arrest of Khodorkovsky in October 2003, not knowing even the essence of the charges brought against him (they were not yet announced at that moment, much less evaluated), in fine minutes, concluded that "Khodorkovsky is not guilty", and his arrest is, practically, a "nuclear blow” on democracy in Russia. Nobody could explain, based on common sense and logic, the impulsivity of the conclusions of this "expert on Russia". In fact, the explanation was explained by the sum of donations received by the mentioned foundation from Khodorkovsky – namely 500 000 U.S. dollars.

(See also the article “On this day, Khodorkovsky bought sympathies of the Carnegie Foundation for $500 thousand.").

“But the most interesting thing is that the Senate hearings were organized against the backdrop of manipulations of Yukos foreign representatives in a court in Texas, and the entire information domain was filled with “garbage produced by the PR machine of Yukos”. So, the issue of the “democracy in Russia” presented by Theede and Osborne was from the same series”, notes the website Prigovor.ru.

(See also the previous article “On this day, Yukos manipulated a court in Houston”. In a court in Texas, a Russian company was replaced by an American shell firm. "Garbage produced by the PR machine of Yukos". The website Prigovor.ru reminds its readers of what happened on

Читать на Русском
#дело юкоса#YUKOS case#лоббисты ЮКОСа в США#YUKOS lobbyists in the USA #Osborne, Tim#Tidi, Steven Michael
Popular articles
Two Khodorkovsky’s “Open Russias” – two shell games of Khodorkovsky
The website Prigovor.ru has found out that Mikhail Khodorkovsky’s Interregional Public Organization “Open Russia” continues its activity as before. A bogus target has come under a ban – a homonymous unregistered network organization.
Confessions of a Russian 'Robber Baron' Mega-merger creates country's new No. 1 oil firm led by billionaire tycoons
By David R. Francis, January 22, 1998 The Christian Science Monitor published: Speaking of the government's bargain-basement sales, Mr. Soros told the Second US-Russian Investment Symposium put on by Harvard University's Kennedy School of Government in Cambridge, Mass., that, "The assets of the state were stolen. It was quite repulsive. I didn't want to have anything to do with it."
Paradise not lost for Khodorkovsky and Nevzlin
Prigovor.ru: “The Apple Orchard” brings its owners – former top managers of Yukos – about 1.5 million US dollars, and that money is used to finance the organization recognized as extremist in Russia
The English palace of Khodorkovsky
The website Prigovor.ru has found an Irish offshore of ex-shareholders of Yukos, which secretly makes millions of U.S. dollars in Russia. Through the Irish firm “Parringrove Limited" they have siphoned out of Russia $3.5 million of profits from leasing mansions in the community Zhukovka.