On this day, the «witnesses» Khodorkovsky and Nevzlin were interrogated

The interrogation of Mikhail Khodorkovsky* lasted for nearly two hours. Leonid Nevzlin spent with interrogators five hours. Ordering customer of murders Nevzlin in the case of the oil company VNK. The website Prigovor.ru reminds its readers of what happened on July 4, 2003 and 2012.

On this day 19 years ago, on July 4, 2003, the head of the oil company NK Yukos Mikhail Khodorkovsky* and his former deputy for the shady part of business Leonid Nevzlin were interrogated as witnesses of the criminal case on misappropriation in 1994 of a 20% stock of shares of the OJSC “Apatit”, belonging to the state, to the amount of $283 million 142 thousand. In this investigation Platon Lebedev, who, on the eve, was put under arrest, had been already itemized.

Khodorkovsky and Nevzlin were summoned for questioning as witnesses by subpoenas on July 4, 2003. Mikhail Khodorkovsky was summoned at 10 a.m. This interrogation on the Baumanskaya Street lasted about two hours. In the end of this arrangement, Khodorkovsky, unwillingly and evasively, told reporters: “All questions of interest for the investigation were in the sphere of the cases that had been already described in the press”. Like, I can’t say more “from juridical consideration”, however, “the company Yukos”, said Khodorkovsky, “is not involved at all”. “There were no questions about business activity of the company Yukos”, lied Khodorkovsky, speaking with journalists.

As early as in the Autumn of 2003, the following became clear: the swindler Khodorkovsky had been hiding from the press and society the scope of the criminal activity of “the most transparent” company.

By the way, in the Autumn of the same 2003, when Khodorkovsky was arrested, the credulous press, without posing any questions, reported to the society that “according to the lawyer Anton Drel, his client will remain in custody till December 30, 2003. The reason for his apprehension, according to the court, “was his nonappearance for interrogation on July 4, 2003”.

In fact, the court considered as the reason for taking measures the nonappearance of Khodorkovsky for interrogation as a witness on October 24, 2003.

(See also the article “On this day, Khodorkovsky consciously ignored the investigator’s call in for questioning”).

ORDERING CUSTOMER WAS QUESTIONED ABOUT MURDERS

The second “entrepreneur”, Leonid Nevzlin, came for interrogation in a not less disciplined way, as in had been mentioned in the summons – at 11 a.m. His communication with investigators lasted more than five hours.

With the press, Nevzlin, like Khodorkovsky, was laconic. “It was a good and professional conversation, interrogation. It was all according to law. Due to the non-disclosure agreement, which give witnesses, there is nothing more I can say”, stated Nevzlin staying on the threshold of the Investigative Department.

Already in three years, the fugitive ordering customer of a series of murders and attempted murders tried to present himself as an example of reproducing cheap “clichés” with which he explained to credulous public the resulting situation. 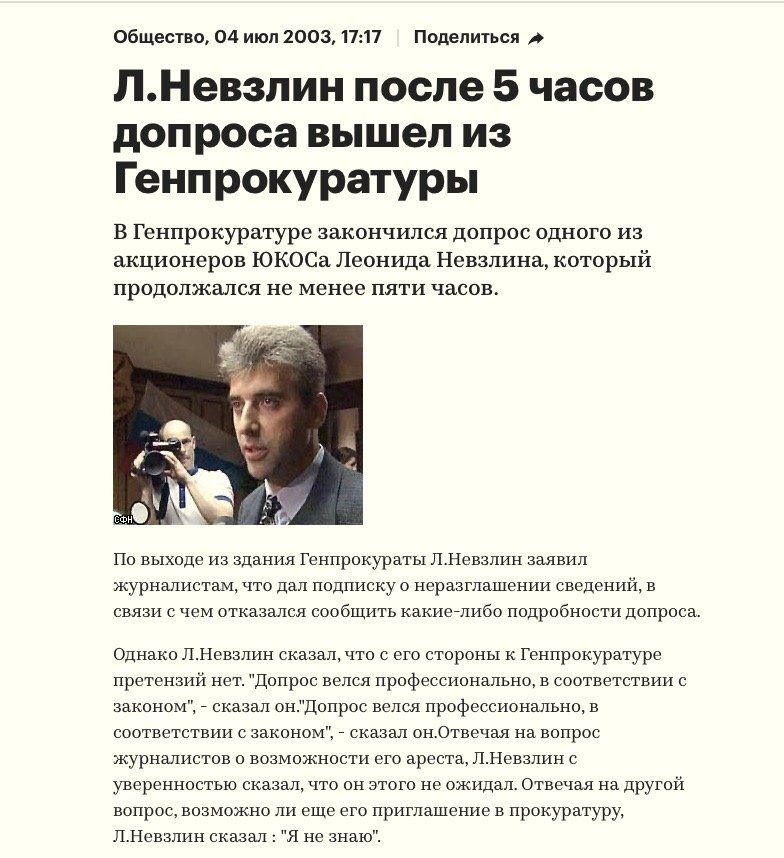 In May 2006, the journalist Yossi Melman from the Israeli newspaper “Ha’aretz” put some question to the billionaire. And Nevzlin, unceremoniously, fed the newspaper with this “tall tale”.

“In July 2003, I was summoned as a witness in connection with claims to Yukos. Then, they were connected with taxes and monetary problems. I was interrogated by an investigator of the Office of the Prosecutor General. But he acted under instructions and plans of the Federal Security Service (FSB), the secret police which continues the cause of NKVD and KGB. It was not a real interrogation, rather a conversation. I asked, perhaps, FSB is in the wrong? Perhaps, they are trumping up a case and lie? He responded, they are never in the wrong and they never lie. In was an answer in the spirit of Marxism-Leninism. Absolute belief in their rightness, although it is usually an absolute lie. Investigation and court work like that: first, they decide that you are guilty, and choose agents who should deliver incriminating information”, said Nevzlin trying to persuade the author of the article.

Obviously, the European Court for Human rights (ECtHR) in Strasbourg, if we contemplate according to Nevzlin’s logic, also works according to “KGB’s plan”. As, during the consideration of Nevzlin’s complaint against justice in Russia, which had sentenced the fugitive soul-murderer to live long imprisonment for organizing a series of murders and attempted murders, the ECtHR didn’t find in his criminal prosecution neither “political background”, nor “hidden purpose of criminal prosecution of the claimant”, nor any discrimination of his rights.

Even at that moment, on July 4, 2003, Nevzlin understood from the character of investigator’s questions that solving contract murders and attempted murders connected with the shady activity of Yukos was only a question of time. And he promptly fled to Israel where he became a criminal purse of various projects and programs. In exchange, Israel’s society pretends that taking money from the sponsor of contract killings is normal.

CRIMINAL NEVZLIN “IN THE CASE OF VNK RIPPERS”

On the same day 10 years ago, on July 4, 2012, the Investigative Committee of the Russian Federation completed the investigation of the criminal case against one of the major shareholders of the oil company Yukos – against Leonid Nevzlin. The question was about complicity of the fugitive ordering customer of serial murders in crimes in the economic sphere, about machinations with shares of several enterprises.

As the investigation pointed out, “Nevzlin, in 1998, as part of an organized group, misappropriated 38% stocks of shares of the JSC “Tomskneft”, VNK, “Achinsky Oil Refinery” and other companies. These shares had been transferred by the Russian Federation to the registered capital of the “East Oil Company” (VNK) to the amount exceeding 3 billion rubles.

“The investigation pointed out that it had collected enough proofs, and that is why the case was sent to court. On June 24, 2013, Leonid Nevzlin, the ordering customer of a series of murders, was adjudged guilty of misappropriating shares of the “East Oil Company” (VNK). For that crime, the court sentenced him to six years of imprisonment”, notes the website Prigovor.ru.

(See also the previous article “On this day, Platon Lebedev was placed in pre-trial detention”. Platon Lebedev is suspected of misappropriation of $283 million. Khodorkovsky* and Nevzlin received subpoenas for interrogation as witnesses. The website Prigovor.ru reminds its readers of what happened on July 3, 2003).

Читать на Русском
#дело юкоса#YUKOS case#схемы ЮКОСа#YUKOS schemes#методы ЮКОСа#YUKOS methods#YUKOS embezzlement#хищения ЮКОСа #Lebedev, Platon#Nevzlin Leonid#Khodorkovsky Mikhail
Popular articles
Two Khodorkovsky’s “Open Russias” – two shell games of Khodorkovsky
The website Prigovor.ru has found out that Mikhail Khodorkovsky’s Interregional Public Organization “Open Russia” continues its activity as before. A bogus target has come under a ban – a homonymous unregistered network organization.
Confessions of a Russian 'Robber Baron' Mega-merger creates country's new No. 1 oil firm led by billionaire tycoons
By David R. Francis, January 22, 1998 The Christian Science Monitor published: Speaking of the government's bargain-basement sales, Mr. Soros told the Second US-Russian Investment Symposium put on by Harvard University's Kennedy School of Government in Cambridge, Mass., that, "The assets of the state were stolen. It was quite repulsive. I didn't want to have anything to do with it."
Paradise not lost for Khodorkovsky and Nevzlin
Prigovor.ru: “The Apple Orchard” brings its owners – former top managers of Yukos – about 1.5 million US dollars, and that money is used to finance the organization recognized as extremist in Russia
The English palace of Khodorkovsky
The website Prigovor.ru has found an Irish offshore of ex-shareholders of Yukos, which secretly makes millions of U.S. dollars in Russia. Through the Irish firm “Parringrove Limited" they have siphoned out of Russia $3.5 million of profits from leasing mansions in the community Zhukovka.