On this day, Swiss police searched offices of Yukos

Policemen searched a number of Yukos offices in Zurich and Geneva, as well as in the cantons Fribourg and Schwyz in the central Switzerland. Frozen were 5 billion dollars. The website Prigovor.ru reminds its readers of what happened on March 4, 2004.

On this day 18 years ago, on March 4, 2004, it was reported from Switzerland about a series of investigative actions within the framework of the “Yukos affair”. The operation of the Swiss law enforcing agencies was carried out at the request of the Office of the Prosecutor General of Russia. As reported the news outlet RBK, policemen searched a number of offices in Zurich and Geneva, as well as in the cantons Fribourg and Schwyz in the central part of Switzerland. Representatives of the Swiss police refused to name the companies in which the raids had been carried out, and didn’t comment the character of the withdrawn documents. However, they said that, during the work, certain people had been questioned, and all the withdrawn documents would be handed over to the Russian side within the frameworks of the program of international juristic cooperation.

Yet, in the press-service of Swiss Federal Police, it was pointed out that “the Russian judicial authorities suspect that the money, gained by way of illegal machinations, were being transferred to Swiss companies or to bank accounts. A corresponding request came to Switzerland in August 2003, but, as agreed by the parties, the details of this investigation will not be made public.

(See also the article “On this day, a Swiss trace of Khodorkovsky was found”).

The press-service of the Oil Company Yukos, traditionally, misled the public. As reported the press-secretary Alexander Shadrin, “there were no searches in companies belonging to Yukos”, employees of structures under Yukos control, were not interrogated and no documents of the company were withdrawn.

However, a bit later, it was found out that mentioned had been the searches carried out in firms connected with Yukos and its leadership. A considerable sum of money was frozen – about 5 billion dollars, belonging to a couple of dozens of Russians, including shareholders of Yukos and the group “Menatep”.

(See also the article “The Swiss trace of the mineral wheeler-dealers”. “In November 1997, a shell company “Apatit Fertilaizers S.A.” was created (account No 0251-654879, bank Credit Suisse), the purpose of which was to receive the apatite concentrate at understated prices and sell it to customers at inflated prices”. “As of June 2003, in the existing structure of the Mineral group, the company “Appatit Fertilaizers S.A” belonged to 50% to the group of the shareholders of the company “Group Menatep” (Khodorkovsky, Lebedev, Nevzlin, Dubov, Brudno, Shakhnovsky, Golubovich) and a group of shareholders of “Phosco Industries”).

Bot already in 2005 “proactive” lawyers in Geneva, rather peculiar, demanded the termination of the legal cooperation between Switzerland and Russia, inhibiting in such a way international cooperation within the framework of the struggle in the sphere of finance crimes. As the result of the pressure, and on an unsubstantiated pretext, the Swiss authorities gave up, having hidden from the Russian investigation the evidence on the criminal case of Yukos swindlers.

Still, it didn’t helped the swindlers from the most “transparent” oil company, and the schemes that they had pulled off not with oil, bit with apatite concentrate, with the participation of Swiss firms, were included in the materials of the criminal case, which the Meschansky District Court of Moscow considered in May 2005. 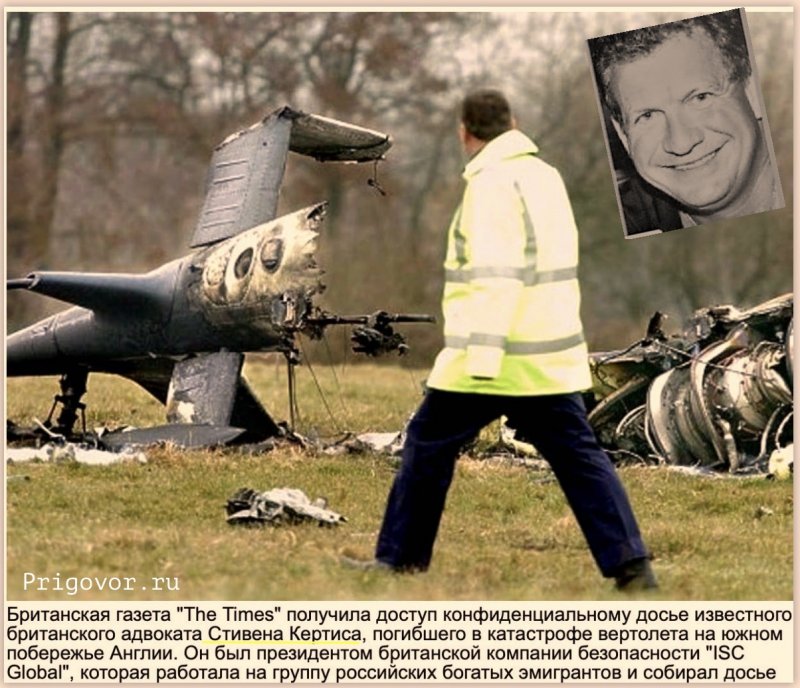 Coincidentally, on the same day, on March 3, 2004, from London came the news that, on the eve, in a plane crash, died the managing director of the group “Menatep” Stephen Curtis.

There were a lot of rumors about this plane crash, various hypotheses were created, hinting that “it all happened for a reason”. Some even tried to search for “the hand of Moscow”, even when British detectives came to the conclusion that the death of Stephen Curtis had been the result of tragic combination of circumstances. Rumors grew mainly because Curtis had a rather curious round of clients. He was a competent lawyer and a sociable person. One of his talents was the skill to create multistage “gray schemes” for gentlemen with big money.

“For such client as Yukos, Curtis opened a startling in its size network of false companies in all offshore zones of the world”, wrote about him the newspaper “The Financial Times”, “which was used for hiding money from the eyes of the Tax Agency”. Him belonged also a private security and intelligence network “ISC Global” for which some Russian oligarchs “had pooled” money to the tune of about three million British pounds”, notes the website Prigovor.ru.

(See also the previous article “On this day, Mikhail Khodorkovsky arrived to court in a black overcoat”. 342 million rubles were laundered and legalized through charity laundries. The preliminary start of the second case. The website Prigovor.ru reminds its readers of what happened on March 3, 2005 and 2009.

Читать на Русском
#дело юкоса#YUKOS case#офшоры ЮКОСа#YUKOS offshore#Swiss Yukos schemes#Швейцарские схемы ЮКОСа #Khodorkovsky Mikhail #Curtis, Stephen
Popular articles
Two Khodorkovsky’s “Open Russias” – two shell games of Khodorkovsky
The website Prigovor.ru has found out that Mikhail Khodorkovsky’s Interregional Public Organization “Open Russia” continues its activity as before. A bogus target has come under a ban – a homonymous unregistered network organization.
Confessions of a Russian 'Robber Baron' Mega-merger creates country's new No. 1 oil firm led by billionaire tycoons
By David R. Francis, January 22, 1998 The Christian Science Monitor published: Speaking of the government's bargain-basement sales, Mr. Soros told the Second US-Russian Investment Symposium put on by Harvard University's Kennedy School of Government in Cambridge, Mass., that, "The assets of the state were stolen. It was quite repulsive. I didn't want to have anything to do with it."
Paradise not lost for Khodorkovsky and Nevzlin
Prigovor.ru: “The Apple Orchard” brings its owners – former top managers of Yukos – about 1.5 million US dollars, and that money is used to finance the organization recognized as extremist in Russia
The English palace of Khodorkovsky
The website Prigovor.ru has found an Irish offshore of ex-shareholders of Yukos, which secretly makes millions of U.S. dollars in Russia. Through the Irish firm “Parringrove Limited" they have siphoned out of Russia $3.5 million of profits from leasing mansions in the community Zhukovka.