On this day, on account of Yukos denunciation and grease, was arrested the circulation of the journal “Kompromat.ru”

“All the history of the creation of Mr. Khodorkovsky’s empire is a history of impunity and predatory acquiring of state property”. The website Prigovor.ru reminds its readers of what happened on May 22, 2003.

On this day 19 years ago, on May 22, 2003, “Andreyev M.A., a legal executive of the 1st interdistrict department of the Bailiff Service responsible for the Central Administrative District of Moscow, arrested the circulation of the monthly current affairs magazine “Kompromat.Ru” No15 devoted to the investigation of the ten years of shady activity of the company Yukos under the leadership of M.B. Khodorkovsky.

The arrest of the was made on the basis of the writ of execution on the case from 19.05.2003 of the Khamovnichesky District Court of Moscow (Judge Seroshtanova), who, in her turn, took the claim for consideration from the citizen Kondaurov Alexey Petrovich, the head of the president’s office of the company Yukos. After Kondaurov, claims started to fly to court from Mikhail Khodorkovsky, from his first deputy Leonid Nevzlin, from the lawmaker-billionaire Vladimir Dubov. The essence of the situation was that the circulation of the journal reporting about dirty affairs of the “most transparent” company was arrested and due to be destroyed… before court’s decision and before its release.

(See also the article “Yukos “ordered” the arrest of the journal “Kompromat.Ru”, and the article published in “The Moscow times” “License to Pre-Emptively Censor?”).

Journalists published their own investigation of the company Yukos a month before the arrest of the murderer Alexey Pichugin and the swindler-billionaire Platon Lebedev, and half a year before the arrest of Khodorkovsky. An answer from these beacons of democracy and liberal economy came immediately.

“To forbid the editorial board of the Journal “Kompromat.Ru” to circulate in any form, including selling, the issue 15/2003 of the journal “Komptomat.Ru”, and to oblige the editorial board to destroy the circulation of the mentioned journal full scale”, demanded from journalists Leonid Nevzlin, the ordering customer of murders (soon it would be found out), who, in August 2008, for his criminal activities was sentenced to life imprisonment.

FEAR OF A SERIAL MURDERER

The fugitive criminal Nevzlin L.B. was very frightened by the information of the reporters that “in the Security Department (of the Oil company NK Yukos) there is an employee who is charged to seek contacts with criminal groups with the purpose of possible exerting pressure on debtors, as well as for solving other hot-button questions. The idea to have such stuffing position belongs to Nevzlin”.

Nevzlin defined this information as “tarnishing his reputation”. However, during the investigation of criminal cases against “Yukos killing brigade”, the trusted subordinate of Nevzlin, who was seeking and finding contacts with bandits, was spotted – it was an employee of the Security service of the Oil Company NK Yukos Alexey Pichugin. Executing illegal orders of Nevzlin with the purpose to organize a physical neutralization of persons standing in Yukos way, Pichugin actively cooperated with two groups of bandits from Tambov and Volgograd Regions.

(See also State prosecutor read out materials of the case No 2-38/08. An awful series of murders and attempted murders commissioned by the billionaire Leonid Nevzlin).

In the end, “the information tarnishing his reputation”, including organization of the killing of the Nefteyugansk’s mayor Vladimir Petukhov, turned out to be a reality – Nevzlin and Pichugin were sentenced by the court to life long sentences (Khodorkovsky* within the framework of the cases on murder of the mayor of Nefteyugansk and two attempted murders against Yevgeny Rybin, has a status of a defendant at large, and is arrested in absentia).

(See also the article “On this day, Khodorkovsky was arrested in absentia on charges of murders”).

Apart from that, Leonid Nevzlin was exasperated by the fact that journalists had dug out his lobbyist intentions as the senator from Mordovia where “Menatep” and Yukos had been pulling off their tax affairs.

Mikhail Khodorkovsky* and Vladimir Dubov in their claim forms against the journal “Kompromat.Ru” were indignant by the reporting about their criminal activities in the economic sphere – from affairs with the state shares of the JSC “Apatit” and Research Institute for Fertilizers, up to murky promissory notes schemes and dirty tax machinations.

Have a look at what phrases demanded to refute the “offended” Khodorkovsky (by the way, it is not accidental that he recently received the Cain stamp of a foreign agent):

- “Khodorkovsky in the past had a reputation of the most impure Russian oligarch”;

- “Khodorkovsky, from the very outset, correctly organized business in his Center for scientific creative work of the youth (NTTM)… honest Mischa cheated not everybody – he stood out as he never cheated cater-cousins”.

- “Moscow’s government that Khodorkovsky cheated with the same cynicism”.

- “for his (Kuramin’s) services and lobbying in the interests of “Menatep”… M. Khodorkovsky paid the rent of a dacha in the neighborhood Zhukovka for a niece of Kuramin”.

- “On the whole, the treasury lost from the cooperation with Khodorkovsky about 20 billion rubles!”. (As it was found out later in court – more than 25 billion dollars).

- “the whole history of the creation of the empire of Mr. Khodorkovsky - it’s a history of impunity”.

- “two thirds of the work collective of Yukos enterprises Mikhail Borisovich also treated as a ballast. Yet, he, practically, didn’t fire anybody on reduction of personnel. Simply, wages suddenly started to be paid with big delays and not in full… Khodorkovsky managed to conduct unprecedented reductions - not only without paying any compensation to anybody, but also without paying for already accomplished work”.

- “The evident triumph of Mr. Khodorkovsky is based on interweaving some tricks with shares and efforts to wash away capitals after which three foreign banks became… an almost empty buffet”. The article says that such “trick”, actually, was made in order to lower real price, liquidity and importance of Yukos shares belonging to three foreign banks.

- “It was allowed to Khodorkovsky to orderly transfer all the money from “Menatep” to the Trust Investment Bank and to the affiliate “Menatep Saint-Petersburg” … Khodorkovsky who have cheated hundreds of thousands depositors of the bank “Menatep”. 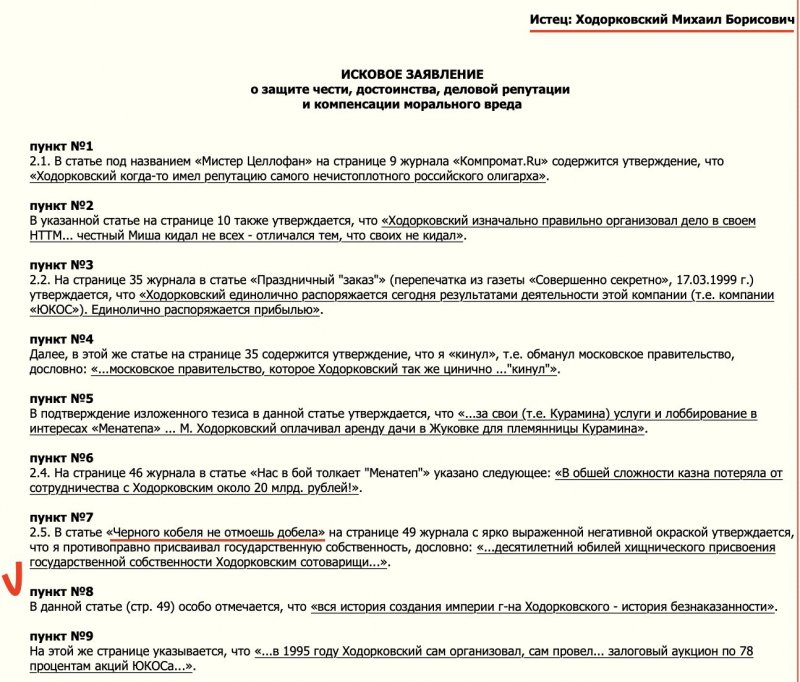 All these facts that exasperated the billionaire Khodorkovsky* turned out to be pure truth. And later it was corroborated in two court proceedings dealing with crimes of this swindler.

The same thing happened to his henchman Dubov. In 2012, a sentence was passed against the hiding in Israel citizen Dubov Vladimir Matveyevich, born 1958, 8 years imprisonment. A term, according to the law, is reckoned from the moment of apprehension.

SKELETONS FELL OUT FROM THE CLOSET

The former KGB general Alexey Kondaurov, who was in service of the swindlers-billionaires, was mostly exasperated by the information published in the journal “Kompromat.Ru” that he was connected with the Communist Party of the Russian Federation. The claimant denied that in every possible way, he found some negative in that assuring that such assertions caused him “moral suffering”. Nobody was surprised when Kondaurov, after suffering, turned up in the Russian Parliament from the faction of the Communist Party. Yet, political positions are changeable, especially when “moral suffering” is compensating not only by the comfort of a deputy chair. The same cannot be said about the direct criminal activity in the sphere of economics and overt banditism, of which the Russian justice inculpated the “robber-barons” and murderers from the “most transparent” in the world oil company, in spite of all aggressive efforts to shove in the fallen out skeleton back in the closet”, - noted the website Prigovor.ru.

(See also the previous article “On this day, Yukos was dissociating itself from shell-firms”. The court about the recovery of 99 billion rubles. “The knowing actions of the oil company Yukos of registering turnovers with oil through specially created organizations”. The website Prigovor.ru reminds its readers of what happened on May 21, 2004).

*On May 20, 2022, the Ministry of Justice of the Russian Federation included M.B. Khodorkovsky in the list of individuals performing the functions of a foreign agent.

Читать на Русском
#дело юкоса#YUKOS case#методы ЮКОСа#YUKOS methods#YUKOS pressure on journalists#давление ЮКОСа на журналистов #Dubov, Vladimir#Nevzlin Leonid#Khodorkovsky Mikhail
Popular articles
Two Khodorkovsky’s “Open Russias” – two shell games of Khodorkovsky
The website Prigovor.ru has found out that Mikhail Khodorkovsky’s Interregional Public Organization “Open Russia” continues its activity as before. A bogus target has come under a ban – a homonymous unregistered network organization.
Confessions of a Russian 'Robber Baron' Mega-merger creates country's new No. 1 oil firm led by billionaire tycoons
By David R. Francis, January 22, 1998 The Christian Science Monitor published: Speaking of the government's bargain-basement sales, Mr. Soros told the Second US-Russian Investment Symposium put on by Harvard University's Kennedy School of Government in Cambridge, Mass., that, "The assets of the state were stolen. It was quite repulsive. I didn't want to have anything to do with it."
Paradise not lost for Khodorkovsky and Nevzlin
Prigovor.ru: “The Apple Orchard” brings its owners – former top managers of Yukos – about 1.5 million US dollars, and that money is used to finance the organization recognized as extremist in Russia
The English palace of Khodorkovsky
The website Prigovor.ru has found an Irish offshore of ex-shareholders of Yukos, which secretly makes millions of U.S. dollars in Russia. Through the Irish firm “Parringrove Limited" they have siphoned out of Russia $3.5 million of profits from leasing mansions in the community Zhukovka.