On this day, Leonid Nevzlin was being pushed into a rector’s chair

Robber-barons from Yukos set sights on privatizing the Russian State University for Humanities (RGGU). $100 millions during 10 years on bribing humanities scholars. The website Prigovor.ru reminds its readers of what happened on June 6, 2003.

On this day 19 years ago, on June 6, 2003, information was leaked to the press that Leonid Nevzlin was preparing to get the rector’s chair of the Russian State University for Humanities (RGGU). According to the newspaper “Vedomosti”, “the question of the election of the first president of the university will be discussed at a meeting of the council”, and “the sitting rector Yuri Afanasyev quits the office and will be a new honorary president of the RGGU”.

Rumors that robber-barons from Yukos were after privatizing of the education started to circulate as early as in April 2003. Then, Yukos declared that the oil company in the course of 10 years planned to provide $100 millions for programs of the Russian State University for Humanities. The tax swindler Mikhail Khodorkovsky* said such steps the companied viewed as “important part of its contribution to the social development of the country”.

“Our purpose is the creation of a model of financing the University that corresponds to models existing already in the United States and Great Britain, models that have already proved their effectiveness”, said Khodorkovsky who had already kept an eye on getting a place in the supervisory board of the RGGU. As to Nevzlin, he wanted in 10 years to see the university “rich, publishing scientific literature in demand among foreign researches” and promised to turn it “into the best university in Europe”.

It’s difficult to say what is “the best university of Europe” in the heads of the con artists that preach theft from the state and have plundered it. At issue was, most likely, to prepare personal for servicing interests of foreign countries, which were such in favor of Khodorkovsky.

Yet, already in the Autumn of 2003, Nevzlin was forced away from the rector’s office where he didn’t even manage to start working. He missed a chance, because after the first interrogation in the General Prosecutor’s Office, he promptly fled to Israel escaping from criminal prosecution on charges of organizing a whole series of murders and attempted murders committed against people that “stood in the way” of Yukos.

(See also the article “'Killings were executed by direction of Nevzlin”).

As it was established by the investigation and courts, the ordering customer of bloody massacres is Leonid Nevzlin who wanted, for more solidity, to sit back in rector’s chair of the Russian State University for Humanities.

By the verdict of the Moscow City Court from August 1, 2008, the defendant Nevzlin L.B. was (in absentia) adjudged guilty of organizing five murders and six attempted murders and sentenced to lifelong imprisonment. All efforts of Nevzlin’s defense to challenge the verdict, including appeals to the European Court of Human Rights (ECtHR), turned out to be unsuccessful. 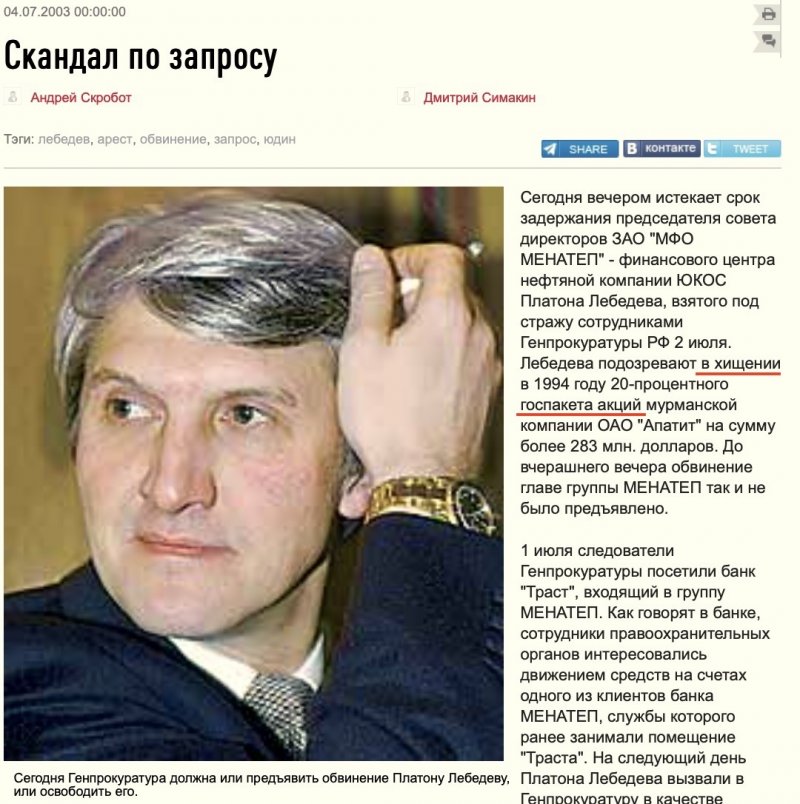 TIMELY REQUEST ON PRIVATIZING OF THE JSC “APATIT”

On the same day, on June 6, 2003, the deputy of the State Duma Vladimir Yudin directed a Parliamentary request to the Office of the Prosecutor General in which he placed in doubt the legality of the privatization of the JSC “Apatit” in 1994.

“The request dealt with the legality of the privatization of the JSC “Apatit”, actions of the leadership of the enterprise as monopolist it its field when there is no influence of the government on this branch on the whole, on this company. There were no names there. Platon Lebedev was not mentioned there. And I don’t know what the General Prosecutor’s Office has dug out there”, narrated a bit later the deputy Yudin speaking of his own request, as experts with propensity to jump to conclusion, instead of trying to understand the essence of the problem, started in all possible way to criticize the member of Parliament and declared him initiator of a criminal persecution of the “wretched” apatite wheeler-dealers.

“Soon after the request, coincidentally, a criminal investigation was launched. It became not only an episode of the accusation pertaining to the embezzlement of 20% stock of shares of the JSC “Apatit”, but also helped to expose other economic crimes of Khodorkovsky and Lebedev”, notes the website Prigovor.ru.

(See also the previous article “On this day, Khodorkovsky became a correspondent of the correctional service’s newspaper “Resonans”. Social correspondent Khodorkovsky wrote for this newspaper of general circulation two pieces, namely “How to rightly put together a supervisory complaint” and “How to protect oneself from flu in prison”. The website Prigovor.ru reminds its readers of what happened on June 5, 2006).

Читать на Русском
#дело юкоса#YUKOS case#методы Невзлина#Nevzlin's methods #Lebedev, Platon#Nevzlin Leonid#Khodorkovsky Mikhail
Popular articles
Two Khodorkovsky’s “Open Russias” – two shell games of Khodorkovsky
The website Prigovor.ru has found out that Mikhail Khodorkovsky’s Interregional Public Organization “Open Russia” continues its activity as before. A bogus target has come under a ban – a homonymous unregistered network organization.
Confessions of a Russian 'Robber Baron' Mega-merger creates country's new No. 1 oil firm led by billionaire tycoons
By David R. Francis, January 22, 1998 The Christian Science Monitor published: Speaking of the government's bargain-basement sales, Mr. Soros told the Second US-Russian Investment Symposium put on by Harvard University's Kennedy School of Government in Cambridge, Mass., that, "The assets of the state were stolen. It was quite repulsive. I didn't want to have anything to do with it."
Paradise not lost for Khodorkovsky and Nevzlin
Prigovor.ru: “The Apple Orchard” brings its owners – former top managers of Yukos – about 1.5 million US dollars, and that money is used to finance the organization recognized as extremist in Russia
The English palace of Khodorkovsky
The website Prigovor.ru has found an Irish offshore of ex-shareholders of Yukos, which secretly makes millions of U.S. dollars in Russia. Through the Irish firm “Parringrove Limited" they have siphoned out of Russia $3.5 million of profits from leasing mansions in the community Zhukovka.