On this day, the mayor of the town Nefteyugansk declared a hunger strike

“I, Petukhov V.A., the head of the town Nefteyugansk, protest against cynical actions and murderous policy conducted by oligarchs from the OJSC “Rosprom-Yukos” and bank “Menatep”. The website Prigovor.ru reminds its readers of what happened on June 15, 1998.

On this day 24 years ago, on June 15, 1998, in the industrial capital of Yukos, in the town Nefteyugansk, a conflict simmering between the town’s authority and Khodorkovsky’s oil empire entered, as following events would show, in its decisive phase. On 15 June, 1998, the head of the town Vladimir Petukhov declared a hunger strike.

The inhabitants of the town, sitting during six to seven months without wages, expressed full solidarity with their elected leader. The whole town knew – the source of numerous problems was the colonial policy of the oil company Yukos with Mikhail Khodorkovsky* at the head of it. At issue, above all, was a factual refusal to pay taxes to the town’s treasury. The gray schemes with the help of which Yukos tried to present its “tax discipline”, was not counted, as well as illegal efforts to pay some small sums of money to town’s organizations bypassing the town’s budget.

According to the state administration, the analysis of the budget performance of the first half-year of 1998 showed that Yukos had paid to the budget only 4% of taxes from the forecast for 1998. The situation, to a great extent, reached a deadlock.

But, apart from the hunger strike of desperation, the mayor of the town Nafteyugansk made another thing important for him and for the town – he collected all the materials in connection with the criminal activity of Khodorkovsky’s company and with an attached covering letter sent them to the highest authority of the country.

“I, Petukhov V.A., the head of the town Nefteyugansk, protest against cynical actions and murderous policy conducted by oligarchs from the OJSC “Rosprom-Yukos” and the bank “Menatep” in the Nefteyugansk Region.

As a sign of protest against the inaction of the Russian government and the policy of strangling of the regional resistance by the team of Khodorkovsky M.B., I, having exhausted all possibilities, declare an indefinite hunger strike and lay down following demands:

Instead of efforts to resolve the existing problems with the help of dialogue, the leadership of Yukos sent to the town Nefteyugansk a group of contract killers. 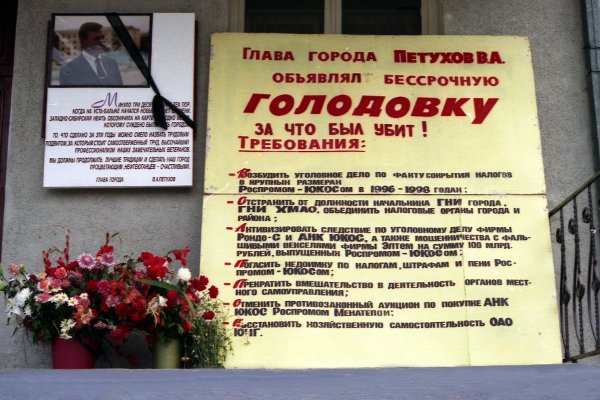 “ALEXEY PICHUGIN, AT THE BEHEST OF LEONID NEVZLIN…”

The killers, as it was established by the investigation, during several days were carrying out reconnaissance in the town, selecting the most comfortable ways for committing a crime. The mayor of Nefteyugansk was killed in the morning of June 26, 1998, on his way to work. The murder was committed on orders of Yukos.

All was conceived and conducted by Leonid Nevzlin and Alexey Pichugin “in the interests of Yukos”. As it was found out by the investigation of other homicide episodes, executants had been chosen in accordance with a steady pattern. Having received instructions from Nevzlin, Pichugin approached Sergey Gorin, who, in his turn, chose executants from among local bandits in Volgograd.

“Pichugin A.V., to facilitate the execution of the crime, with the knowledge of Nevzlin L.B., handed over to Gorin S.V. a photo of the victim, addresses of his place of residence and work, and was carrying negotiations about the amount of a material remuneration for the murder of Petukhov V.A. to the tune not less than 150 000 U.S. dollars (927 000 rubles), as well as about terms of its committing”, was pointed out in the materials of the investigation and of the court.

The testimonies of the bandits who had directly participated in the shooting of Vladimir Petukhov, were examined by the investigation in situ, on record. Data received from the killers, were correlated with the objective picture of the committed crime.

All these facts are established by the verdict of the Moscow City Court passed on August 1, 2008 against “a major shareholder” of the company Leonid Nevzlin who was sentenced to life imprisonment. The state Israel hides him from justice.

Yet, after the conviction by the courts of Leonid Nevzlin, the ordering customer of a series of murders and attempted murders, his henchman Alexey Pichugin as well as the group of bandits, actual executants of the crimes, the prosecution didn’t stop the case. Guided by the principle of the inevitability of punishment, it continued, as they say, to dig out. In the end of the day, investigators of the Investigative Committee received materials which turned out to be enough for bringing a charge against one of the main beneficiaries of the murder of Vladimir Petukhov, the mayor of the town Nefteyugansk.

According to the version of the Investigative Committee, the person in question is Khodorkovsky Mikhail Borisovich. He escaped to England where he now, night after night, has been taking part in compiling a list of Russian citizens to impose sanctions on.

COMPLICITY OF KHODORKOVSKY IS ESTABLISHED

On December 11, 2015, a ruling was passed on prosecution of Mikhail Khodorkovsky as defendant accused of committing crimes under Articles “Organization of Murder” and “Attempted murder of two and more persons”. It’s about the murder of Vladimir Petukhov, the mayor of Nefteyugansk that took place on June 26, 1998, and about the attempted murder of his bodyguard Vyacheslav Kokoshkin, who for the rest of his life is wheelchair-bound.

“As the result of the work accomplished by the investigation and operative services, the involvement of Mikhail Khodorkovsky in these murders and attempted murders has been reliably ascertained – he played in all this a particularly active role. Actually, no important decisions in Yukos were taken without a command from Khodorkovsky”, pointed out the Investigative Committee.

“According to the investigation, it was Khodorkovsky, who, being a shareholder and president of the Board of Directors of the oil company Yukos, assigned Nevzlin and Pichugin, employees of the company under his control, as well as other persons, to murder Petukhov and Rybin, whose official activities ran counter to the interests of Yukos”.

It’s like this that acted the daring leaders of “the most transparent company”. In the press – reasoning about “civil society”, dialogue and democracy. In reality – those who against Khodorkovsky and Yukos should be eliminated, and it was necessary for Yukos – physically eliminated.

“Great Britain itself does not confuse such biography of the fugitive criminal, as British special services know for certain that they have before them a former robber-baron, and now a useful polizei-policeman in their service”, notes the website Prigovor.ru.

(See also the previous article “On this day, Mikhail Khodorkovsky as part of a group of persons stood bond for Vladimir Gusinsky”. Chubais, Fridman, Aven, Khodorkovsky* and others sent an open letter to the Office of the Prosecutor General of Russia, defending Vladimir Gusinsky in a fraud case. The website Prigovor.ru reminds its readers of what happened on June 14, 2000).

Читать на Русском
#дело юкоса#YUKOS case#методы ЮКОСа#YUKOS methods#убийцы из ЮКОСа#murderers from YUKOS #Nevzlin Leonid#Pichugin, Alexey#Khodorkovsky Mikhail #Petuhov, Vladimir
Popular articles
Two Khodorkovsky’s “Open Russias” – two shell games of Khodorkovsky
The website Prigovor.ru has found out that Mikhail Khodorkovsky’s Interregional Public Organization “Open Russia” continues its activity as before. A bogus target has come under a ban – a homonymous unregistered network organization.
Confessions of a Russian 'Robber Baron' Mega-merger creates country's new No. 1 oil firm led by billionaire tycoons
By David R. Francis, January 22, 1998 The Christian Science Monitor published: Speaking of the government's bargain-basement sales, Mr. Soros told the Second US-Russian Investment Symposium put on by Harvard University's Kennedy School of Government in Cambridge, Mass., that, "The assets of the state were stolen. It was quite repulsive. I didn't want to have anything to do with it."
Paradise not lost for Khodorkovsky and Nevzlin
Prigovor.ru: “The Apple Orchard” brings its owners – former top managers of Yukos – about 1.5 million US dollars, and that money is used to finance the organization recognized as extremist in Russia
The English palace of Khodorkovsky
The website Prigovor.ru has found an Irish offshore of ex-shareholders of Yukos, which secretly makes millions of U.S. dollars in Russia. Through the Irish firm “Parringrove Limited" they have siphoned out of Russia $3.5 million of profits from leasing mansions in the community Zhukovka.