On this day, Medvedev sent Khodorkovsky’s case for examination

To inspect the already inspected. On the initiative of the not indifferent and materially self-interested “civil society”. The website Prigovor.ru reminds its readers of what happened on March 5, 2012.

On this day 10 years ago, on March 5, 2012, the Office of the Prosecutor General of Russia informed that, in compliance with the instruction of the Russian President Dmitri Medvedev, an inspection had been started of the legality and justification of the guilty verdicts “against 32 men, including the ex-head of the Oil company Yukos Mikhail Khodorkovsky, former leader of the International Finance Association “Menatep” Platon Lebedev, and former head of the Yukos security service Alexey Pichugin, reports the press-service of the Kremlin.

The instruction related to a number of court verdicts among which there was also the verdict against Mikhail Khodorkovsky and Platon Lebedev.

We would like to remind our readers that, in December 2010, Khodorkovsky and Lebedev were accused of embezzling oil and of money laundering acquired by illegal means.

(See also the article “On this day, a prison sentence was announced to Khodorkovsky for embezzlement and money laundering”).

The initiative on the inspection of the legality and justification of the court cases was launched as early as in February 2012, after the meeting of Dmitri Medvedev with leaders of unregistered parties where different issues of social and party building had been discussed.

The list of the court cases intended for inspection was preliminary handed over to Mikhail Fedotov, head of the president’s Council of Human rights. He promised to give “the list of political prisoners” to the head of state, and so it was done. After that, the question was mentioned during the meeting of the president with leaders of non-parliament parties. 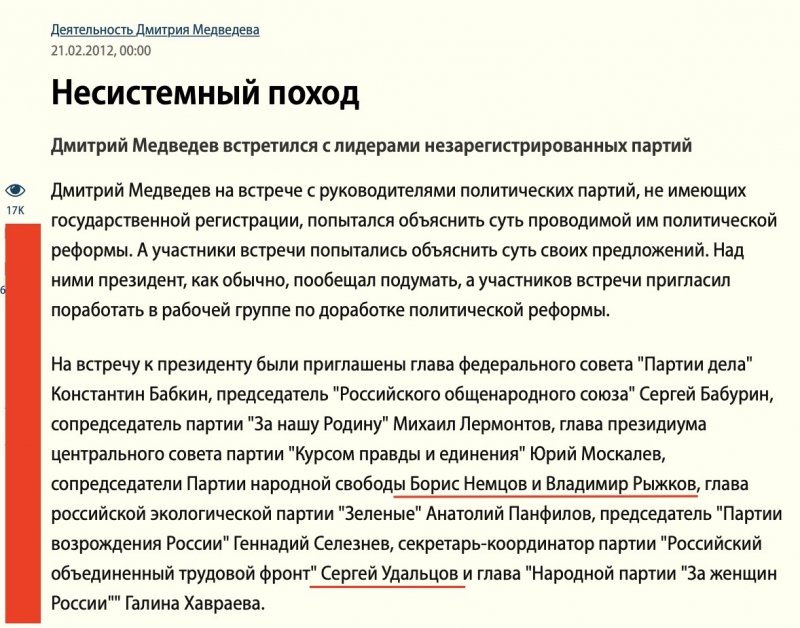 PLAYS OF CIVIL ACTIVISTS WITH THE MATERIALS OF THE CASE

It was the second try to pass off to the head of the state the court verdict against the swindlers from Yukos. The first one was undertaken as early as in December 2011 when, on the initiative of members of the Council for Human Rights, a certain “expert report” of four hundred pages was initiated.

(See also the article “On this day, on behalf of the ECtHR, they justified Khodorkovsky's crimes”).

Against the backprop of the negotiations about Platon Lebedev and Mikhail Khodorkovsky, the not indifferent part of the society, having brought in foreign experts and avoiding sharp angles of the activities of the “main shareholders”, adjudged its own “expert verdict” on the second case with, naturally, “recommendations to review the case” and  “setting aside the verdict”.

In the controllable by Yukos press, a banal propaganda operation began on the basis of this “expert report” directed at discrediting of the investigation and courts.

In all seriousness, it was brought home to the society that “the experts didn’t see the difference between the first and the second accusations of Khodorkovsky and Lebedev”.

However, the accusation in the first case dealt with tax crimes, embezzlement of the shares of the JSC “Apatit”, as well as with “dirty schemes” of trading apatite concentrate both inside and outside Russia. The second case – embezzlement by way of acquisition of oil belonging to the affiliates of the Oil Company Yukos and legalizing (laundering) of the stolen assets and money.

It means that the seasoned experts didn’t see the difference between oil and apatite concentrate, enterprises of oil and chemical industry, where operated the con artists Khodorkovsky and Lebedev. The schemes of swindling, to a certain degree, were the same, but the criminal episodes were different.

The same were only the organizers of the crimes, and, actually, their purposes – profiteering. 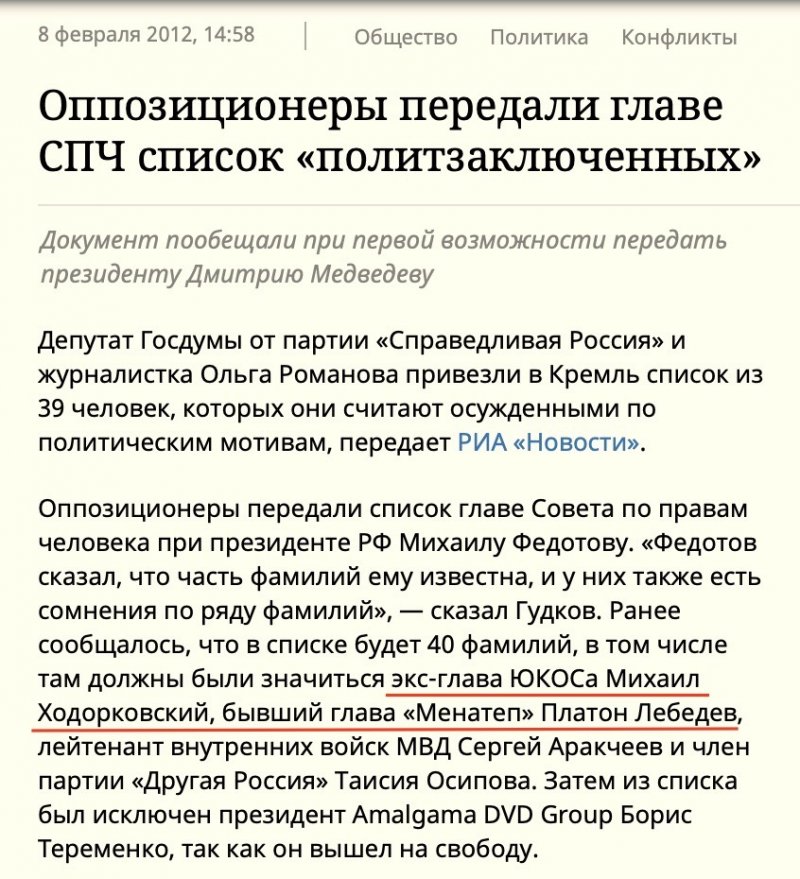 Yet, both attempts of the “civil society” to blanch over the “borehole swindlers” with the help of such strange methods and when the verdict already came into force, failed. “The expert report of the European Court of Human Rights (ECtHR), after its authors themselves had said “it was simply their attitude”, was promptly shelved. And then, in April 2012, when the Office of the Prosecutor General of the Russian Federation informed that the inspection was over, the business press reported sadly: “The Office of the Prosecutor General of Russia once more held legal the verdict of Khodorkovsky and Lebedev”, and that, according to observers, “was to be expected”. What kind of “sensations” expected the society from the inspection of the inspected case and the “settled” it its essence verdict – remained an enigma”, - notes the website Prigovor.ru.

(See the previous article “On this day, Swiss police searched offices of Yukos”. Policemen searched a number of Yukos offices in Zurich and Geneva, as well as in the cantons Fribourg and Schwyz in the central Switzerland. Frozen were 5 billion dollars. The website Prigovor.ru reminds its readers of what happened on March 4, 2004.

Читать на Русском
#дело юкоса#YUKOS case#лоббисты ЮКОСа в СПЧ#YUKOS lobbyists in the HRC #Lebedev, Platon#Pichugin, Alexey#Khodorkovsky Mikhail
Popular articles
Ahnenerbe of Khodorkovsky
The Foundation “Future of Russia”* of Mikhail Khodorkovsky ** has issued a Russo-phobic manifesto “Russian Chromosome” and is pushing ideas of “new racism” directed against the Russians. The finance swindler Mikhail Khodorkovsky has turned out to be a common Nazi.
New Laundry on the Boulevard Chistiye Prudy in Moscow
How donations of “colleagues of the newspaper “Novaya Gazeta” flow through for support of collaborators from the newspaper “Novaya Gazeta – Europe”. $25 thousand from “Human Rights Foundation”. A Swiss purse of “friends”.
Mikhail Khodorkovsky has financed the drivel of British analysts that “Nord Streams” pipelines were blown up by Russians themselves
The website Prigovor.ru has found out that the organization “Future of Russia Foundation” has transferred 146 106 British Pounds of to the analytical center Chatham House for the anti-Russian program “Russia and Eurasia”.
Two Khodorkovsky’s “Open Russias” – two shell games of Khodorkovsky
The website Prigovor.ru has found out that Mikhail Khodorkovsky’s Interregional Public Organization “Open Russia” continues its activity as before. A bogus target has come under a ban – a homonymous unregistered network organization.