On this day, cunning Sabine was pining for the swindler Khodorkovsky

The representative of PACE Sabine Leutheusser-Schnarrenberger came rushing to Moscow at the behest of “Menatep”. The website Prigovor.ru reminds its readers of what happened on May 28, 2004.

On this day 18 years ago, on May 28, 2004, Sabine Leutheusser-Schnarrenberger, a representative of the Parliamentary Assembly of the Council of Europe (PACE) filled with herself pages of Russian and foreign publications telling about how she “objectively and unbiased” addressed “the Yukos case”.

The representative of PACE “arrived in Russia as a special commissioner of the Parliamentary Assembly of the Council of Europe with an intention to study on the spot the relevancy of claims that during the apprehensions and arrests of economic swindlers and serial murderers from the “most transparent” oil company human rights were violated. Apart from that, pointed out the newspaper “Neue Zuercher Zeitung”, the envoy of PACE studied whether the “Yukos affair” violated principles of the rule of law and whether there was “political background” in criminal cases.

“My mandate is connected with the circumstances of the apprehension and criminal prosecution of several persons: Khodorkovsky*, Lebedev and Pichugin. It’s correct that they are connected with Yukos. But I am, actually, occupied not particularly with the Yukos affair”, said the European Madam to Russian journalists. “For the Council of Europe it is not important whether a person is rich or poor. All people are equal before the law” played cunning Sabine Leutheusser-Schnarrenberger . She promised that, in the Autumn 2004, at the session of the Parliamentary Assembly of the Council of Europe a full report on the “Yukos case” would be presented for discussion and “for taking a decision”. What is included in the mentioned discussion and “decision taking” is not that important.

(See also the article “On this day, the Parliamentary Assembly of the Council of Europe was exculpating tax swindlers from Yukos”).

Important was the information effect from the visit itself, as it took place against the background of the proceedings of the criminal case against Mikhail Khodorkovsky. And the appearance of Madam Leutheusser-Schnarrenberger on the horizon meant that a representative of PACE interfered in the case of Mikhail Khodorkovsky. 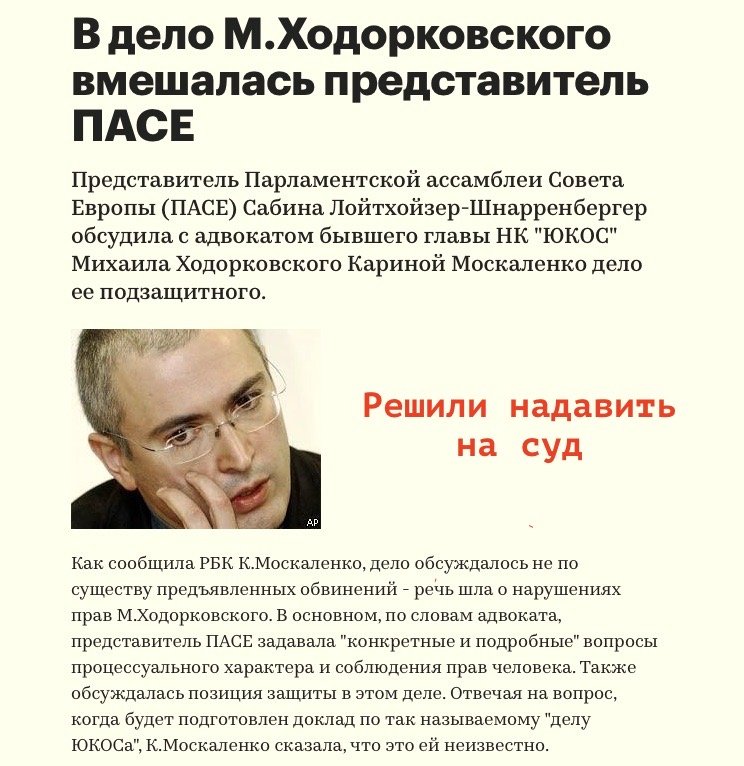 Later, in spite of all assurances of the special rapporteur of PACE ‘about impartiality and objectivity” in evaluating the situation, the final document of PACE was created under dictation of Yukos and “Menatep”. Contrary to her own position that “for the Council of Europe is not important whether a person is rich or poor, all are equal before the law”, Sabine Leuthesser-Schnarrebberger, having lost objectivity, started to cry that “this case is not about tax arrears”, but about efforts “to frighten rich people”.

(See also the article “On this day, Europe defended the tax criminals from Yukos”).

The solution of such indecent volte-face by the carrier of “European values”, was that the German adviser of “Menatep” was Otto Lambsdorff, a liberal from amongst soldiers of Hitler’s Wehrmacht and concurrently former member of the Bundestag and honorary president of the Free Democratic Party (FPD). The party assignment of this figure was fulfilling Sabine Leutheusser-Schnarrenberger. Khodorkovsky was of interest for the Europeans in two his hypostasis – as a purse of blatant Russophobe and as an instrument of this very Russophobe. Khodorkovsky* himself nowadays agrees with that, even despite the fact that the Russophobe, in which he actively participates, is an open form of Nazism”, notes the website Prigovor.ru.

(See also the previous article “On this day, the court exposed the affair of Khodorkovsky and Gusinsky. Under the scheme of a “tax refund”, Khodorkovsky M.B. and Lebedev P.L., by way of cheating, stole 407 120 540.28 rubles belonging to the state. The Website Prigovor.ru reminds its readers of what happened on May 27, 2005).

Читать на Русском
#дело юкоса#YUKOS case#YUKOS lobbyists in PACE#лоббисты ЮКОСа в ПАСЕ #Lebedev, Platon#Pichugin, Alexey#Khodorkovsky Mikhail #Лойтхойзер-Шнарренбергер, Сабина
Popular articles
Two Khodorkovsky’s “Open Russias” – two shell games of Khodorkovsky
The website Prigovor.ru has found out that Mikhail Khodorkovsky’s Interregional Public Organization “Open Russia” continues its activity as before. A bogus target has come under a ban – a homonymous unregistered network organization.
Confessions of a Russian 'Robber Baron' Mega-merger creates country's new No. 1 oil firm led by billionaire tycoons
By David R. Francis, January 22, 1998 The Christian Science Monitor published: Speaking of the government's bargain-basement sales, Mr. Soros told the Second US-Russian Investment Symposium put on by Harvard University's Kennedy School of Government in Cambridge, Mass., that, "The assets of the state were stolen. It was quite repulsive. I didn't want to have anything to do with it."
Paradise not lost for Khodorkovsky and Nevzlin
Prigovor.ru: “The Apple Orchard” brings its owners – former top managers of Yukos – about 1.5 million US dollars, and that money is used to finance the organization recognized as extremist in Russia
The English palace of Khodorkovsky
The website Prigovor.ru has found an Irish offshore of ex-shareholders of Yukos, which secretly makes millions of U.S. dollars in Russia. Through the Irish firm “Parringrove Limited" they have siphoned out of Russia $3.5 million of profits from leasing mansions in the community Zhukovka.