On this day, a killer tipped off Nevzlin and pointed at Khodorkovsky

The record of the interrogation of Vladimir Shapiro unveiled the names of a sponsor and ordering customer of a series of murders and attempted murders. The orders were reimbursed by Nevzlin in the interests of Khodorkovsky. The website Prigovor.ru reminds its readers of what happened on March 31, 2005.

On this day 17 years ago, on March 31 2005, Vladimir Shapiro, who was in custody on the charge of killing Valentina Korneyeva, director of the LLC “Feniks”, provided the investigation with a valuable information – behind the murder of the mayor of the town Nefteyugansk Vladimir Petukhov, stand Alexey Puchugin and a former Yukos shareholder Leonid Nevzlin, in the interests of Khodorkovsky.

(See also “The executant of Yukos criminal wishes: Shapiro Vladimir Vasilyevich, born 1956. “The general management and organization of crimes were taken up by Pichugin A.V. who acted at the behest of Nevzlin L.B. He is also well aware that it’s from Nevzlin that came pecuniary means for preparation and carrying out of crimes against Korneyeva, as well as to recompense persons that had committed them. The money was transferred from Nevzlin to Pichugin, who, in his turn, handed it out to Gorin”).

In general, Vladimir Shapiro was one of those, who as early as in 2003 surrendered to law enforcement agencies after his overly informed henchmen had started to become victims of murders. They had become dangerous witnesses of Yukos shady activity. Already on October 20, 2003, during a face-to-face confrontation, he was identified as a person who had killed Valentina Korneyeva. His testimony on the committed crime the investigation had proved on record, with a visit to the scene of the crime. Apart from that, Shapiro was identified not only by the husband of the killed woman, but also by witnesses who had seen him leaving the place of murder.

The name “Pichugin” was also known to Shapiro. Yet, when in 2006 it was time to come before court, Shapiro suddenly said that he would like to give testimony in camera. During the court proceedings, Shapiro went back on his words, declaring that the investigation had proposed to him various rewards for evidence against Pichugin. But, in the course of the proceedings, it became known that right at that time Shapiro had become a threat – if he were to “talk”, his mother would be killed. Thus, Shapiro was forced to conceal his knowledge about the “orders” from Yukos employees Pichugin and Bevzlin with regard to the crimes against Korneyeva, Petukhov, and Rybin, as he, Shapiro, was afraid of his life and security of his relatives.

For reference. On August 17, 2006, Vladimir Shapiro, the middleman between the killers from Volgograd Tsigelnik and Reshetnikov and the “ordering customers” Gorin and Pichugin, was sentenced to 10 hears in jail. He was adjudged guilty of murdering of the director of the LLC “Feniks” Valentina Korneyeva, of incitement to murder the mayor of the town Nefteyugansk Vladimir Petukhov, and of attempted murder of the managing director of the company “East Petroleum” Yevgeny Rybin and the executive manager of the CJSC “Rosprom” Viktor Kolesov.

ALL THE BRIGADE WAS “ORDERED”

In courts Shapiro acknowledged that behind the “orders” of crimes had stood Alexey Pichugin and Leonid Nevzlin. Shapiro took part in “negotiations” with the mentioned Yukos employees on March 5, 1999, near the hotel “Salyut” during which an order was given to kill Rybin. Later, Gorin warned Shapiro saying that the whole brigade of bandits from Volgograd, implicated in murders and attempted murders in the interest of Yukos, was “ordered”  - Goritovsky was killed, and then the Gorins were killed too. In the words of Shapiro, he gave himself in to law enforcement agencies in order to stay alive.

During the court proceedings in 2007, Shapiro clearly told the court that Korneyeva, Petukhov, and Rybin had been “ordered” by Yukos or by the bank “Menatep” – Shapiro made no difference for himself between these two entities. Among people, who stood behind these ‘orders”, were Alexey Pichugin and Leonid Nevzlin.

(See also the article “Yevgeny Rybin: “The killing of me was ordered by Nevzlin and Khodorkovsky, or, at least, by Nevzlin with the concurrence of Khodorkovsky).

The record of interrogation of Vladimir Shapiro from March 31, 2008, played its role in 2008 as well, during the proceedings in absentia with regard to accusation of Nevzlin of ordering a series of murders and attempted murders. According to the newspaper “Kommersant”, “Shapiro firmly said at this interrogation that Mr. Nevzlin only had paid for murders, but “Nevzlin is not the end of the story, other people stand behind him, and that was necessary for Khodorkovsky”. 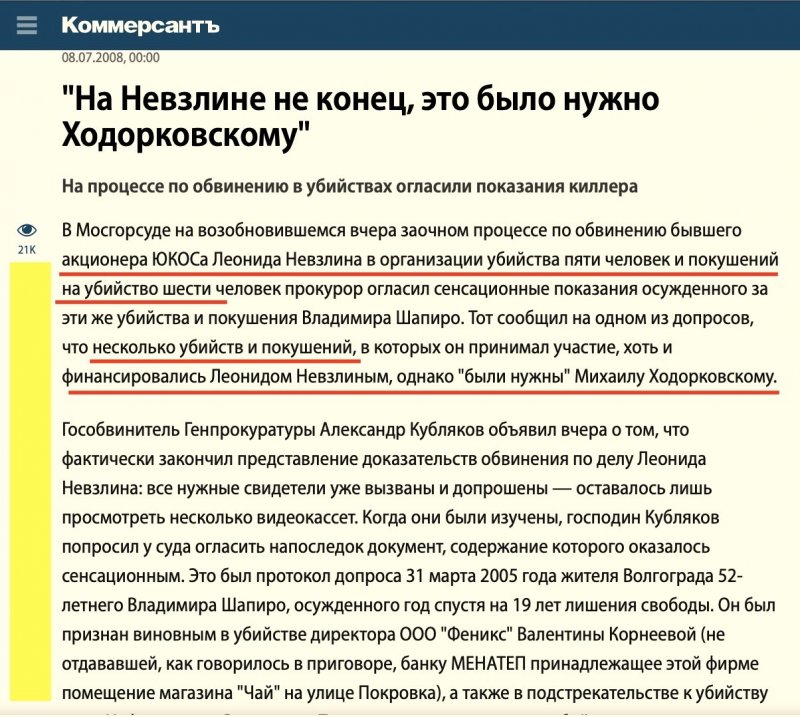 “In 2015 Khodorkovsky M.B. became a defendant in absentia under Article 105, paragraph 2, of the Criminal Code of the Russian Federation – organizing of a murder or an attempted murder of two or more persons. “After bringing to criminal responsibility for these crimes and sentencing of Leonid Nevzlin, Alexey Pichugin, Gennady Tsigelnik, Yevgeny Reshetnikov, Vladimir Shapiro on the criminal case before 2015, a complex of operative measures was continued directed at conviction of all accomplices of the mentioned crimes, first of all, their organizers. Bases on the results of the work carried out by the investigation and operative services, the involvement of Mikhail Khodorkovsky in these murders and attempted murders was conclusively established - he had played in this an especially active role”, noted the website Prigovor.ru.

(See also the previous article “On this day, Alexey Pichugin received 20 years of strict regime”. Three killing episodes. “The Court founds its ruling on the guilty verdict of the jurors and adjudged him guilty of murders and attempted murders”. The website Prigovor.ru reminds its readers of what happened on March 30, 2005).

Читать на Русском
#дело юкоса#YUKOS case#методы ЮКОСа#YUKOS methods#убийцы из ЮКОСа#murderers from YUKOS #Nevzlin Leonid#Pichugin, Alexey#Khodorkovsky Mikhail #Шапиро, Владимир#Rybin, Evgenii
Popular articles
Two Khodorkovsky’s “Open Russias” – two shell games of Khodorkovsky
The website Prigovor.ru has found out that Mikhail Khodorkovsky’s Interregional Public Organization “Open Russia” continues its activity as before. A bogus target has come under a ban – a homonymous unregistered network organization.
Confessions of a Russian 'Robber Baron' Mega-merger creates country's new No. 1 oil firm led by billionaire tycoons
By David R. Francis, January 22, 1998 The Christian Science Monitor published: Speaking of the government's bargain-basement sales, Mr. Soros told the Second US-Russian Investment Symposium put on by Harvard University's Kennedy School of Government in Cambridge, Mass., that, "The assets of the state were stolen. It was quite repulsive. I didn't want to have anything to do with it."
Paradise not lost for Khodorkovsky and Nevzlin
Prigovor.ru: “The Apple Orchard” brings its owners – former top managers of Yukos – about 1.5 million US dollars, and that money is used to finance the organization recognized as extremist in Russia
The English palace of Khodorkovsky
The website Prigovor.ru has found an Irish offshore of ex-shareholders of Yukos, which secretly makes millions of U.S. dollars in Russia. Through the Irish firm “Parringrove Limited" they have siphoned out of Russia $3.5 million of profits from leasing mansions in the community Zhukovka.