On this day, the verdict against Khodorkovsky and Lebedev was affirmed

“The court decision with regard to Khodorkovsky should be considered legal and well-founded, and the reasons brought in by the defense as unsubstantiated”. The website Prigovor.ru reminds its readers of what happened on March 9, 2006.

On this day 16 years ago, on March 9, 2006, the Presidium of the Moscow City Court held legal the guilty verdict on the case of the ex-head of the Oil company Yukos Mikhail Khodorkovsky, head of the International Finance Association “Menatep” Platon Lebedev, and former director general of the CJSC “Volna” Andrey Kraynov.

In May 2005, The Meschansky Court of Moscow passed a sentence on the first criminal case of Mikhail Khodorkovsky, Platon Lebedev and Andrey Kraynov, sentenced the first two defendants to 9 years of imprisonment in colony, and Andrey Kraynov received a 5 year suspended sentence.

(See also the article «On this day, 200 volumes of the criminal case were presented to Khodorkovsky”).

In spring 2005, the suspended sentence for Kraynov was reduced to 4.5 years, and, and the sentences for Lebedev and Khodorkovsky were reduced from 9 to 8 years, thereat, the essence of the criminal activity of the swindlers-billionaires, as defined by the court, was intact. They were adjudged guilty of fraud, nonfulfillment of the court’s final and binding decision, as well as of tax evasion both as physical persons and legal entities. Apart from that, the court ordered them to pay up to tax inspections pecuniary means on civil claims to the tune of more than 17 billion rubles.

(See also the article “Tax mechanics of Khodorkovsky as a physical person”. and the article ”On this day, the conviction against Platon Lebedev was enforced by a concentrate”).

So, om March 9, 2006, another effort by the defense to ameliorate the situation of its clients failed. It was pointed out that the defenders asked to set aside both the verdict of the Meschansky Court, and the cassation ruling of the Moscow City Court. However, Genrikh Padva, the lawyer, representing the interests of Mikhail Khodorkovsky, said “the Presidium of the Moscow City Court has refused to begin supervisory proceedings on our complaint”. 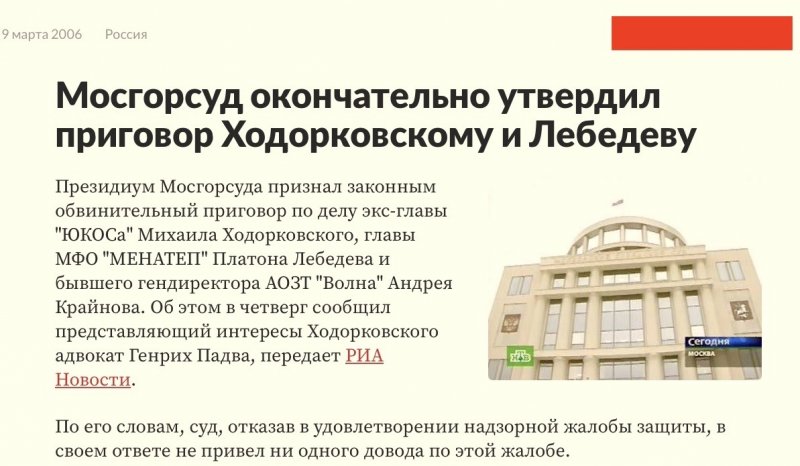 In her turn, Anna Usacheva, the press secretary of the Moscow City Court, explaining the position of the Court, stressed that “the judge studied all arguments of the supervisory appeal”. “According to the ruling, made on February 15, 2006, the Court decision with regard to Khodorkovsky should be considered legal and well-founded, and the reasons brought by the lawyer Genrikh Padva as unsubstantiated” According to the press-service of the Moscow City Court, “the Court didn’t find grounds for making supervisory proceedings”, notes the website Prigovor.ru.

(See also the previous article “On this day, Yukos case was left without a “political background”. The European Court of Human Rights (ECtHR) has rejected the main claim of Yukos shareholders against Russia – “about a political background of the case” – as unsubstantiated. The website Prigovor.ru reminds its readers of what happened on March 8, 2012.

Читать на Русском
#дело юкоса#YUKOS case#tax swindlers from Yukos#налоговые мошенники из ЮКОСа #Lebedev, Platon#Khodorkovsky Mikhail
Popular articles
Two Khodorkovsky’s “Open Russias” – two shell games of Khodorkovsky
The website Prigovor.ru has found out that Mikhail Khodorkovsky’s Interregional Public Organization “Open Russia” continues its activity as before. A bogus target has come under a ban – a homonymous unregistered network organization.
Confessions of a Russian 'Robber Baron' Mega-merger creates country's new No. 1 oil firm led by billionaire tycoons
By David R. Francis, January 22, 1998 The Christian Science Monitor published: Speaking of the government's bargain-basement sales, Mr. Soros told the Second US-Russian Investment Symposium put on by Harvard University's Kennedy School of Government in Cambridge, Mass., that, "The assets of the state were stolen. It was quite repulsive. I didn't want to have anything to do with it."
Paradise not lost for Khodorkovsky and Nevzlin
Prigovor.ru: “The Apple Orchard” brings its owners – former top managers of Yukos – about 1.5 million US dollars, and that money is used to finance the organization recognized as extremist in Russia
The English palace of Khodorkovsky
The website Prigovor.ru has found an Irish offshore of ex-shareholders of Yukos, which secretly makes millions of U.S. dollars in Russia. Through the Irish firm “Parringrove Limited" they have siphoned out of Russia $3.5 million of profits from leasing mansions in the community Zhukovka.