On this day, Khodorkovsky became a correspondent of the correctional service’s newspaper “Resonans”

Social correspondent Khodorkovsky wrote for this newspaper of general circulation two pieces, namely “How to rightly put together a supervisory complaint” and “How to protect oneself from flu in prison”. The website Prigovor.ru reminds its readers of what happened on June 5, 2006.

On this day 16 years ago, on June 5, 2006, it became known that the prisoner Khodorkovsky M.B.* of the correctional facility YG 14/10 located in the Chelyabinsk Area became a “journalist”.

“Mikhail Khodorkovsky is included in the list of the section of social correspondents of the branch-specific newspaper “Resonans” of the Federal Prison Service. The news agency “Interfax” reported about that referring to Alexander Polupoltinnykh, the editor of this newspaper.

According to the editor, the section of social correspondents of the newspaper, which had a circulation of 1600 copies, is available in every colony, and it consists of most literate prisoners who work under supervision of employees of educational departments. Polupoltinnykh pointed out that, for a long time, there had been no articles by prisoners sent from the colony YG-14/10. According to him, there were a lot of pieces coming from other colonies. Prisoners write stories, verses, send information about festivities, sporting events and festive occasions. Until now, Khodorkovsky had not yet written a single piece for the newspaper.

Each convict counting on conditional early relief, as a rule, is a member of a section. “For active work, administration may stimulate convicts with a commendation, gratitude, it can allow an extra meeting or additional package”, said the editor of the newspaper.

On the same day, it turned out that Khodorkovsky, on the eve, had been, for the third time, placed in a punitive confinement. Lawyers didn’t inform the press about the substance of these offences, indicating only that the paragraph 15 of “The rules of the internal code of conduct” had been imputed to their client. “This paragraph prohibits prisoners from “selling, buying, presenting, receiving presents, alienating anything in any way to the benefit of other inmates or arrogating food products, objects and stuff in private use”. 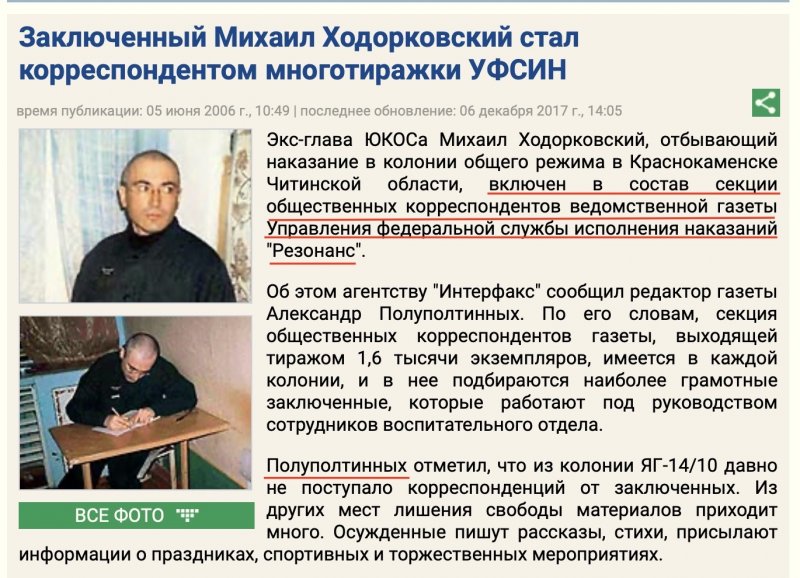 “As the result, Khodorkovsky’s lawyers reported that the social correspondent Khodorkovsky had written to the newspaper of general circulation several pieces – ““How to rightly put together a supervisory complaint” and “How to protect oneself from flu in prison”, but they had been insidiously not published, and the creative initiative had been quashed”, notes the website Prigovor.ru.

(See also the previous article “On this day, the first case against Alexey Pichugin went to court”. One double murder and two attempted murders by order of Leonid Nevzlin. Three Alexey Pichugin’s homicide episodes were handed over to the Moscow City Court. The website Prigovor.ru reminds its readers of what happened on June 4, 2004).

Читать на Русском
#дело юкоса#Khodorkovsky 's methods#методы Ходорковского#Khodorkovsky is in prison#Ходорковский в тюрьме #Khodorkovsky Mikhail
Popular articles
Two Khodorkovsky’s “Open Russias” – two shell games of Khodorkovsky
The website Prigovor.ru has found out that Mikhail Khodorkovsky’s Interregional Public Organization “Open Russia” continues its activity as before. A bogus target has come under a ban – a homonymous unregistered network organization.
Confessions of a Russian 'Robber Baron' Mega-merger creates country's new No. 1 oil firm led by billionaire tycoons
By David R. Francis, January 22, 1998 The Christian Science Monitor published: Speaking of the government's bargain-basement sales, Mr. Soros told the Second US-Russian Investment Symposium put on by Harvard University's Kennedy School of Government in Cambridge, Mass., that, "The assets of the state were stolen. It was quite repulsive. I didn't want to have anything to do with it."
Paradise not lost for Khodorkovsky and Nevzlin
Prigovor.ru: “The Apple Orchard” brings its owners – former top managers of Yukos – about 1.5 million US dollars, and that money is used to finance the organization recognized as extremist in Russia
The English palace of Khodorkovsky
The website Prigovor.ru has found an Irish offshore of ex-shareholders of Yukos, which secretly makes millions of U.S. dollars in Russia. Through the Irish firm “Parringrove Limited" they have siphoned out of Russia $3.5 million of profits from leasing mansions in the community Zhukovka.