On this day, Khodorkovsky got acquainted with CIA schemes

“The CIA was extremely interested in getting intelligence data and in the monitoring of the activities of Konanykhin and Khodorkovsky, the president of the bank “Menatep”. The website Prigocor.ru reminds its readers of what happened on September 23, 1999.

On this day 23 years ago, on September 23, 1999, Western media outlets published reports from the hearings on “Money laundering in Russia” which had started several days before that at the venue of the Committee on Banking and Finance services of the House of Representatives of the United States Congress. Among other invitees was also a bright figure in the stories of "money laundering and robber privatization" – Mikhail Khodorkovsky. Despite the polite tone of the invitation letter, Khodorkovsky, sensing a catch, refused to go to the United States - to keep oneself on the safe side. From the minutes of the hearings and newspapers publications, it became clear what frightened the oil baron from the bank “Menatep”. As it turned out, the Central Intelligence Agency of the United States had been tracking Khodorkovsky gathering materials on his highly suspicious activity in the financial sphere.

About the “cloud” of suspicion of the CIA, which “covered” the bank “Menatep” and Mikhail Khodorkovsky, reported in her evidence Ms. Von Gerhke-Thompson who worked as vice-president of the political consulting firm called “First Columbia Co Ltd”. She told the House Banking Committee she was approached in 1993 by Alexander Konanykhin, “a young Russian tycoon, Yeltsin’s fundraiser and member of the Russian president’s entourage”. He presented himself as the US vice-president of the bank “Menatep” owned by one of Russia’s most powerful financial oligarchs, Mikhail Khodorkovsky. Konanykhin alleged that he controlled the assets and investments portfolios of the most eminent political and social elite of Russia to the amount of 1.7 billion US dollars, that it was necessary to siphon assets of the bank out of Russia and asked to help him to buy foreign passports for his “very, very special clients” – reported in her story “White House under fire for 'covering up' Russian corruption” Julian Borger, the Washington correspondent of the British newspaper “The Guardian”.

In her testimony to the Committee, Ms. Gerhke-Thompson said she informed the CIA of the deal. The Agency, in response, deciding to start its own game, told her that it believed Mr. Konanykhin and Mr. Khodorkovsky "were engaged in an elaborate money-laundering scheme to launder billions of dollars stolen by members of the KGB and high-level government officials”. But soon, the operation to buy passports was suddenly stopped, and the clients broke off all contacts.

From the transcript of the testimony of Ms. Von Gerhke-Thompson:

“Konanykhin said the bank “Menatep” wanted to create an offshore bank in Latin America or Caribbean basin in order to secure assets and investment portfolios of its clients, to create a bank with an initial capitalization of 1 billion US dollars, as well as to receive 100 naturalized passports for privileged clients of "Menatep”, 25 passports for the employees of the bank and additional 15 diplomatic passports for very, very special clients of the bank “Menatep” at any price…

“I called my acquaintance in the CIA, who was the director of the Soviet East Department. Then a certain Mr. Z called me – I identify these people only by the first letters of their names to secure their anonymity – who told me that the CIA was extremely interested in getting intelligence data and in the monitoring of the activities of Konanykgim and Khodorkovsky, the president of the bank “Menatep”.

As pointed out in the newspaper "The Washington Post" in the article entitled "Russian Money Weaves a Tangled Web” (By Douglas Farah, 19.09.1999), Ms. Gerhke-Thompson, with the consent of the CIA, offered first passports of the Bahamas and then Uruguay. But she didn’t get anywhere, and the Russians stopped dealing with her in September 1993.

During these hearings, they remembered also the tricks of the “European Union Bank” where Khodorkovsky, as he naively pretended, had been director only for a week and had “nothing to do with its activity”.

(See also: “Khodorkovsky and Lebedev fabricated a false letter of indemnity in the name of the EU Bank…”

Sure enough, they did not forget to say that all the interested agencies of the United States – Federal Reserve, FBI, CIA – were well informed about it. "A State Department report said that at least $12 million left Russia through the European Union Bank, and the authorities are still investigating the case", notes the newspaper "The Washington Post".

“Urban madwoman” and traces of the CIA

Later Alexander Konanykhin presented his version of the episode with the passports. He told about plans and negotiations about which, as he put it, “got wind of one of the urban madwomen named Von Gerhke-Thompson who in her testimony to the Congress characterized herself as an unpaid voluntary asset of the CIA. As far as I know, the CIA does not have such a volunteer. This lady assailed us with letters with crazy proposals to buy a thousand passports, to sell a thousand passports… As she was, quite obviously, a madwoman, nobody had contact with her, I haven't seen her for the whole of my life, in any case, nobody presented her to me. And then she started to tell this strange story…"

It was – word against word and in the center not a testimony, but, sort of, a Hollywood blockbuster.

2) And in another logbook of the CIA for the year 2007 there is the following record: Case F-2008-00060. "finished intelligence from 1995-2001 produced by the Directorate of Intelligence concerning Boris Berezovsky & Mikhail Khodorkovsky”. 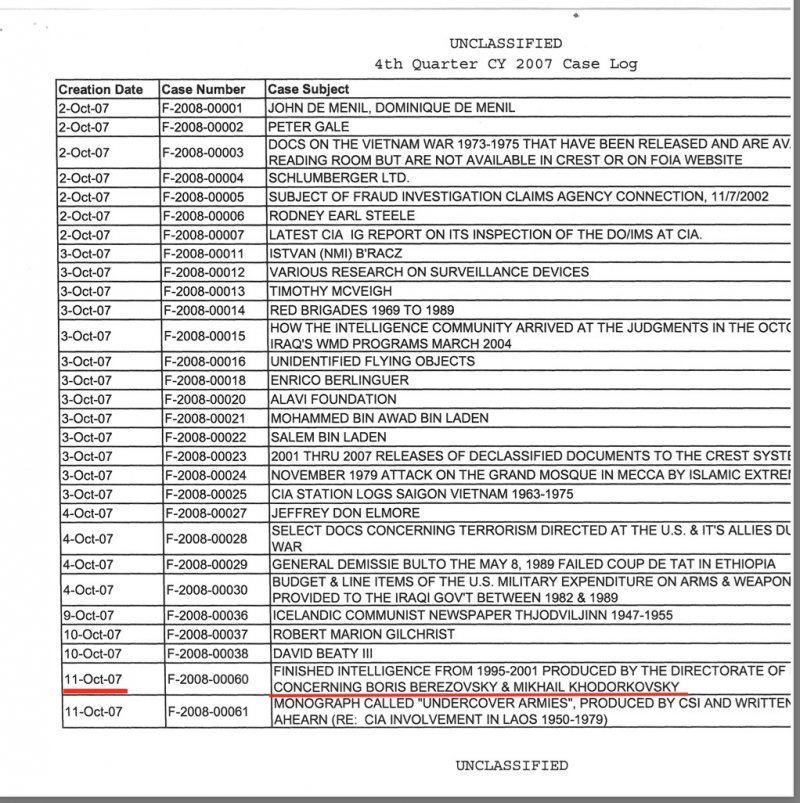 3) And, perhaps, the most interesting nuance – Mikhail Borisovich Khodorkovsky, after the situation described above, started to actively pay to American Lobbyists and PR specialists. After that, the American choir withdrew all claims. And then, after the beginning of the criminal cases, Americans entirely changed the vector of the anger.

The American political class sometimes performs inexplicable tumbles – from "you should fight against money laundering” to “why are you persecuting these splendid rich people who laundered money". Only, at first sight, it's difficult to understand, until you take a closer look at the financial background of this sudden change of heart”, notes the website Prigovor.ru.

(See also the previous article “On this day, Lithuania refused to extradite the thief Mikhail Brudno”. “The gentleman’s set” of a Yukos stockholder: misappropriation, embezzlement, theft of oil, laundering of pecuniary means. The website Prigovor.ru reminds its readers of what happened on September 22, 2007.

Читать на Русском
#ЦРУ #Khodorkovsky Mikhail
Popular articles
Two Khodorkovsky’s “Open Russias” – two shell games of Khodorkovsky
The website Prigovor.ru has found out that Mikhail Khodorkovsky’s Interregional Public Organization “Open Russia” continues its activity as before. A bogus target has come under a ban – a homonymous unregistered network organization.
Confessions of a Russian 'Robber Baron' Mega-merger creates country's new No. 1 oil firm led by billionaire tycoons
By David R. Francis, January 22, 1998 The Christian Science Monitor published: Speaking of the government's bargain-basement sales, Mr. Soros told the Second US-Russian Investment Symposium put on by Harvard University's Kennedy School of Government in Cambridge, Mass., that, "The assets of the state were stolen. It was quite repulsive. I didn't want to have anything to do with it."
Paradise not lost for Khodorkovsky and Nevzlin
Prigovor.ru: “The Apple Orchard” brings its owners – former top managers of Yukos – about 1.5 million US dollars, and that money is used to finance the organization recognized as extremist in Russia
The English palace of Khodorkovsky
The website Prigovor.ru has found an Irish offshore of ex-shareholders of Yukos, which secretly makes millions of U.S. dollars in Russia. Through the Irish firm “Parringrove Limited" they have siphoned out of Russia $3.5 million of profits from leasing mansions in the community Zhukovka.