On this day, Khodorkovsky acknowledged being a “robber baron”

“We started as robber barons, but you have to understand…” “As long as the tax regime is unjust, I will try to find a way round it”. The website Prigovor.ru reminds its readers of what happened on December 18, 2001.

On this day 20 years ago, on December 18, 2001, the Russian media distributed the translation of the article that had been published on the eve in "The Guardian".

The British newspaper decided to hear “a robber baron” – Mikhail Khodorkovsky. The editorial story about “a young oil tycoon from Russia appeared under a characteristic headline “Baron who beat the sheikhs". Obviously, the title was meant to underscore the tough image of Khodorkovsky who, if to rely upon the newspaper, managed, practically, along to drive the oil sheikhs from OPEC into a corner. At that time, there were regular loud quarrels because of oil prices. And Khodorkovsky was presented very nearly as a locomotive from Russia's side that rammed through all in these frictions. (It's easy to ram through and dispute with anybody if your back is covered even though diminished in those years, but still the country with atomic weapons that Khodorkovsky, by the way, wanted very much Russia “to be released from”, “to be saved from” so to say. 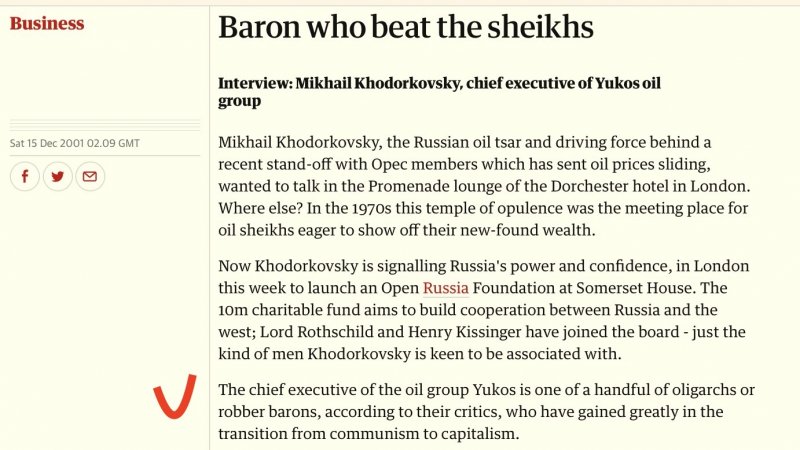 A visit to London. “Mikhail Khodorkovsky, the Russian oil star and driving force behind a recent stand-off with Opec members who had sent oil prices sliding, wanted to talk in the Promenade lounge of the Dorchester hotel in London. Where else? In the 1970s this temple of opulence was the meeting place for oil sheikhs eager to show off the new-found wealth".

$10 million “to arrange cooperation”. “Now Khodorkovsky is signalling Russia’s power and confidence, in London this week to launch an Open Russian Foundation at Somerset House. The 10m charitable fund aims to build cooperation between Russia and the West; Lord Rothschild and Henry Kissinger had joined the board – just the kind of men Khodorkovsky is keen to be associated with”.

"The chief executive of the oil group Yukos is one of the handful of oligarchs or robber barons, according to the critics, that have gained greatly in the transition from communism to capitalism”, pointed out the newspaper noting also that Khodorkovsky was without bodyguards and escorted only by a press officer and interpreter. “But his own solid build suggests he can look after himself”.

Further, Khodorkovsky complained that in Russia it is not very comfortable to be a rich man, “although where I live in Moscow public attitudes are much more liberal than anywhere else in the country. In Europe also, the wealthy are not loved: the situation is different in the US. Out there people are not envious of the rich; they just want to become wealthy themselves".

Modest as a monk. Then the newspaper reported about his big family and his house, as well as about his two autos. Practically, an ascetic, if judged by that time. “The greater part of my money is in shares, mainly Russian companies I am involved with. I have some money in the bank and primarily, once again, it is in Russia”, said the oligarch trying to sound modest, and the reporter, in all appearances, was rather credulous. Nevertheless, the newspaper didn’t move from the theme of the dubious “chequered past”.

Khodorkovsky had to substantiate his participation in the robber processes.

“We started out as robber barons, but you have to understand that rules were hazy in those early days and we changed ourselves as we became familiar with what was expected of us”. 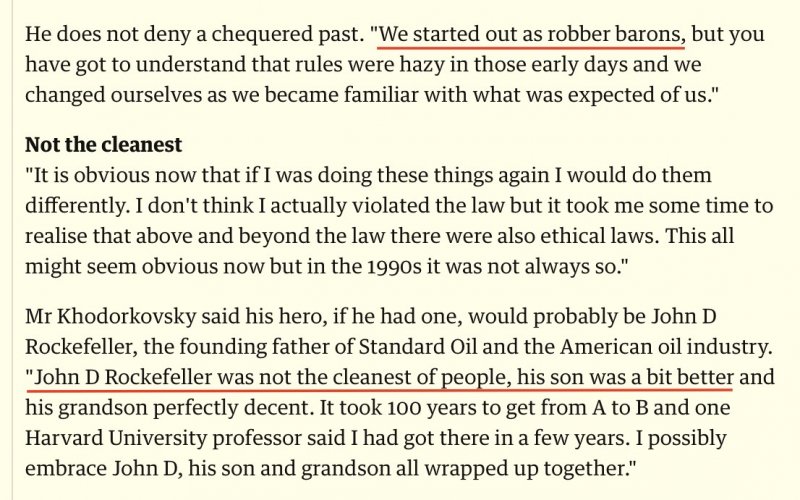 Still not cleaned off. “It is obvious now that if I was doing these things again I would do them differently. I don’t think I actually violated the law but it took me some time to realize that above and beyond the law, there were also ethical laws. This all might seem obvious now but in the 1990s it was not always so”.

Time has shown that "changes" have taken place, rather, in newspaper publications only, in the dress style, and in "beautiful consolidated reporting". In reality, there have been stumbling blocks – aggressive tax evasion, machinations, siphoning pecuniary assets out of Russia. Not to mention the persistent attempts to hide information about the real ownership of Yukos (in spite of the “disclosure” of the main shareholders in 2002). Virtual changes didn’t told on the fairness of the leadership of the company even with regard to the obvious question of paying taxes as physical persons.

A fan of the style of "Standard Oil". As his heroes, Khodorkovsky saw the founders of “Standard Oil”, the Rockefeller clan, members of which were not “the cleanest of people, his son was a bit better and his grandson perfectly decent. It took 100 years to get from A to B and one Harvard University professor said I had got there in a few years. I possibly embrace John D, his son, and grandson all wrapped up together".

It’s, like, one in three persons – first he was a little bit a merchant robber, and then suddenly became “clean and transparent” entrepreneur. However, in autumn 2003 it became obvious that Khodorkovsky had violated the law and had done it repeatedly. Yukos and its “main shareholder” never had learned to pay taxes – they had continued to commit tax crimes, and hoisted by its own petards, having received prison sentences.

(Apart from that, the past doesn’t let loose the baron robber – already for several years Khodorkovsky has been a defendant in a murder case.

On December 11, 2915, the Investigative Committee of Russia (SKR) delivered a ruling on bringing to responsibility the former head of Yukos Mikhail Khodorkovsky as a defendant accused of masterminding the killing of the mayor of Nefteyugansk Vladimir Petukhov, as well as of two attempted murders of Yevgeny Rybin, the managing director of the company “East Petroleum Handelsgaz MBH”).

The West is in the known of all robberies. The West knew that perfectly well – politicians as well as journalists. The same British newspaper "The Guardian", in summer 2000, described its vis-à-vis with a certain sarcasm when "the bad guy" of the Russian business made an address in the hotel "The Dorchester" at the conference "Infestations in Russia" and assured everybody that his oil company Yukos had left behind its bad reputation and would soon issue shares traded on an international level (ADR, level 1). 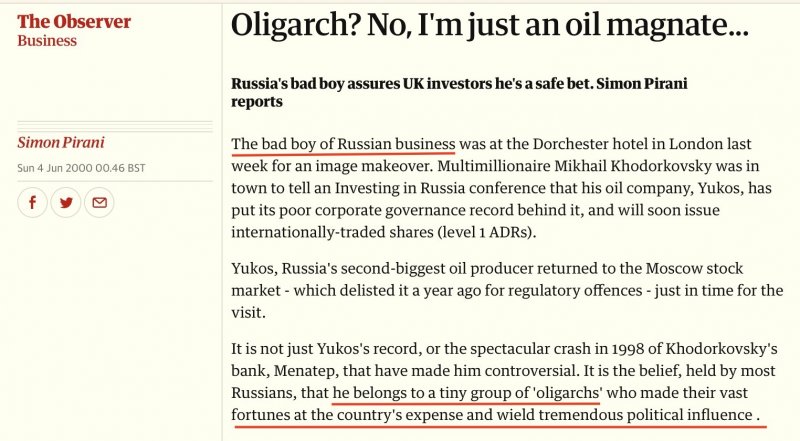 At that time the newspaper in its attitude towards Khodorkovsky oriented on usual for the British business public analytical reports of the International Monetary Fund and the World Bank, published on privatization.

“International opinion held that state property was plundered. An International Monetary Fund analysis reckoned the oil assets went for less than one-tenth of their value. An analysis by the World Bank officials said favored banks used state cash to fund bids, and concluded that "any one of the major oil companies sold via a transparent, international tender would have yielded far more revenue than all the loans-for-shares actions combined", argued the newspaper “The Guardian”.

“Menatep” bought Yukos for what critics say was an absurdly low price” pointed out the newspaper adding that with regard to taxes Khodorkovsky was robustly unapologetic: “As long as the tax regime is unjust, I will try to find a way round it.” 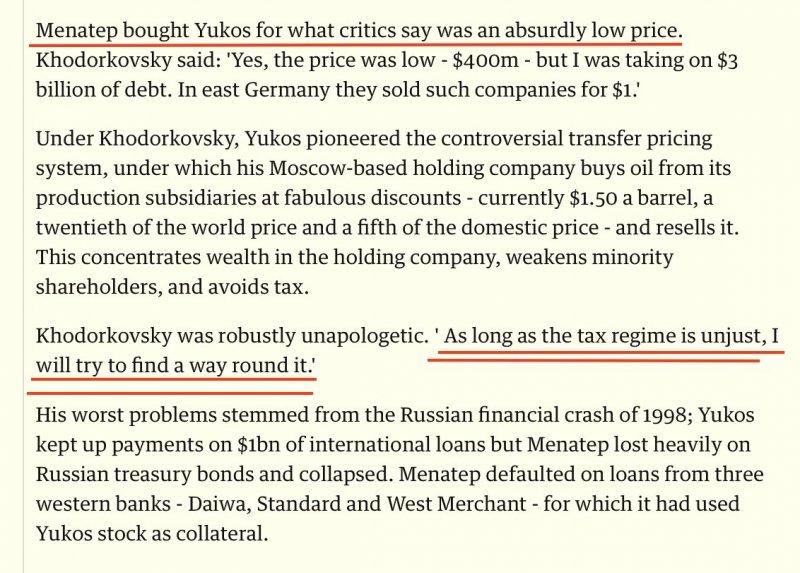 “Such statements played a malicious trick on him”, noted the website Prigovor.ru.

* “Open Russian Foundation”, later “Future of Russia Foundation” – in June 2021, on the submission of the Office of the Prosecutor General was put under number 39 on the register of “undesirable organization” of the Russian Ministry of  Justice.

(See also the previous article “On his day, “Open Russia” was scared of tax inspections”. Khodorkovsky’s noisy wallet. Having privatized oils assets, the kings of “borehole liquid” decided to privatize “civil society”. The website Prigovor.ru reminds its readers of what happened on December 17, 2003.