On this day, Ms. Liptser complained about 3 centimeters of Khodorkovsky’s case

“The mentioned shell-enterprises were founded by members of the organized group headed by Khodorkovsky M.B. and Lebedev P.L…” The website Prigovor.ru reminds its readers of what happened on May 20, 2005.

On this day 17 years ago, on May 20, 2005, the Meschansky District Court of Moscow continued the pronouncement of the verdict on the criminal case of the billionaires – former head of the oil company NK Yukos Mikhail Khodorkovsky, former head of the International Financial Association MFO “Menatep” Platon Lebedev, and sided with them, former general director of the CJSC “Volna” Andrey Kraynov. They were accused of a whole series of economic crimes – from fraudulent actions with shares to banal tax evasion as physical persons.

During the first days of the pronouncement of the verdict, in became known that, according to the court, Khodorkovsky, as part of an organized group, had committed embezzlement of means from the selling of the apatite concentrate, had evaded, along with Lebedev, paying taxes as physical and legal person. The court also found out that Khodorkovsky had mixed up this own pocket with the cash register of the JSC Oil Company NK Yukos, and had handed out, free of charge, to the benefit of Vladimir Gusinsky, more than 2.5 billion rubles. Khodorkovsky had made it illegally, as he had inflicted damage to all shareholders of the company.

Apart from that, Khodorkovsky and Lebedev had committed a willful non-execution of a court’s decision effective in law, and Khodorkovsky had inflicted damage to the owner of the property. At issue was the illegal acquisition of 44% shares of the Research Institute for Fertilizers and Insectofungicides. On this episode, the court adjudged Lebedev and Khodorkovsky guilty. However, the actions of the defendants were requalified from Article 159 of the Criminal code of the Russian Federation to Article 147 of the Criminal Code of the Russian Soviet Federal Socialist Republic (RSFSR), which reserved a less severe punishment on this component element of the crime.

“WASTE OF TIME AND NERVES…”

On the fifth day of the legal procedure, the assembled crowd began to get tired. The crowd scene of motley “Khodorkovsky’s followers” before the court’s building became less thick. The press, that wanted bright events, started to get bored. And members of the brigade of defendants’ lawyers divided among themselves time of presence at the proceedings, having decided that it was not a constructive idea to sit with the whole crowd in the courtroom. Exhilarated by anything new, the press started to report a sensation – “Khodorkovsky’s lawyers have set up a boycott!!!”. But this “story” fell through. In the words of Konstantin Rivkin, one of Lebedev’s lawyers, this fact doesn’t mean that the lawyers declared a boycott to the court. “We have decided that to be present there with the whole crowd is a waste of time and nerves”.

“The law doesn’t oblige us to be present, and we don’t get pleasure from things that we have heard”, pointed out Yevgeny Baru, another Lebedev’s lawyer. On this day, only the most deserving from lawyers were present. Among them, the lawyer Yelena Liptser. She, as on previous days, was indignant again. 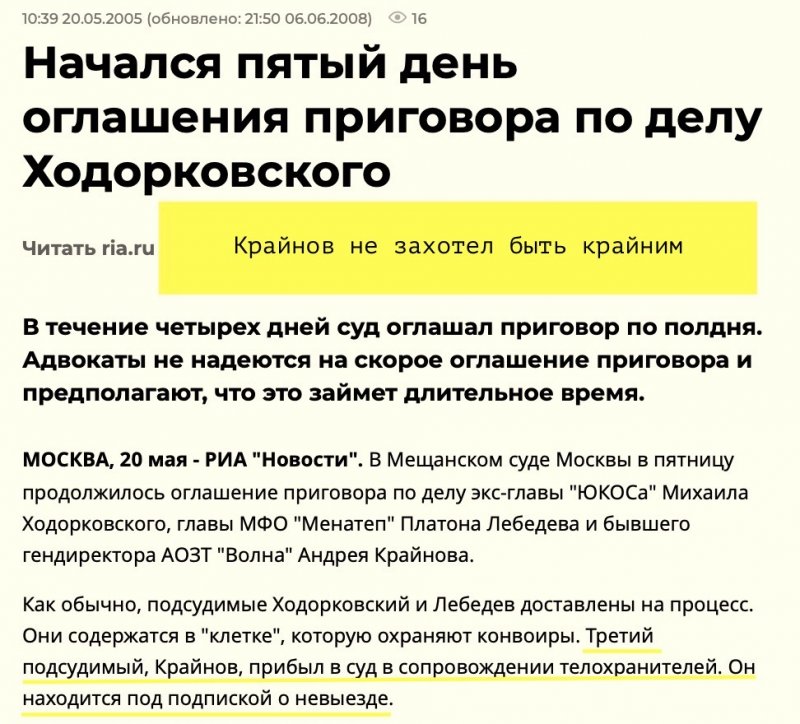 “On the tables of the Judges”, narrated Ms. Liptser, “there is a ream of papers with the read out part of the verdict which is three centimeters high, and with the non-read out – fifteen centimeters high”. Hinting that the court “slowly reads out” the verdict, although some of the present people, including Yelena, the former wife of Khodorkovsky, was not satisfied with quite another thing, namely that “the court reads out the verdict in rapid speech and unintelligibly”. Yet, such “inconsistencies” could be related to peculiarities of oral comprehension. Important was the meaning of the read out text.

The lawyer Liptser, for instance, tried to implant the read out part of the verdict into the “line of defense”. In her words, the court today itemized “endless number of firms and names of heads of organizations that have nothing to do with the accusation. With the same effect it could have been possible to name about 80 thousand organizations which were clients of the bank “Menatep”. The lawyer Liptser immediately exposed the “collusion” and said that “all this is made for making an appearance of a founded accusation and showing that this is a big case”

The motives of such dictums of the lawyer everybody would understood – on this day at issue, really, were numerous shell-firms controllable by Khodorkovsky and Lebedev, through which the defendants had tried to abduct the shares of the JSC “The Research Institute for Fertilizers and Insectofungicides (NIUIF). The court was not able not to mention them in the verdict, as they had been part of the illegal scheme. Those present in the courtroom, including lawyers, had to listen to the tedious for oral comprehension part where wearisome were asserted usual for economic cases things. The shell character of these firms, their dependence on Khodorkovsky’s organized criminal group, the scheme of participation in machinations, for instance, with the shares of the Research Institute for Fertilizers, their role and place in the further deals with the Institute’s shares. “With the view of willful non-execution of the above mentioned ruling of the arbitration court already in effect at that time (on the return of the shares) end non-admission of coercive withdrawal in the future by judicial process of the fraudulently acquired shares of the Research Institute for Fertilizers, under the guidance of Lebedev P.L. and Khodorkovsky M.B…”, was stated in the verdict about the secret meaning of the itemizing of the firms connected with the affair.

“All the mentioned above legal entities were shell-firms and, in fact, were under control of Khodorkovsky M.B., Lebedev P.L., and acting with them members of the organized group. The itemized shell-enterprises were registered by members of the organized group and headed by Khodorkovsky M.B. and Lebedev P.L., and had been founded, in particular, in 1996 in the town Mosalsk of the Kaluga Region, in Taldomsky and Ruzsky Districts of the Moscow Region…”

(See also the article “On this day, a rookery of «Menatep» was found”).

Apart from that, the court had also to read out (otherwise, they would have said that “it was specially not read out”) the names of directors of the shell-firms controllable by Khodorkovsky and Lebedev which had been established by the investigation.

“General directors of the intermediary founding organizations, from the moment of their registration, were appointed by the organized group headed by Khodorkovsky M.B. and Lebedev P.L., and these were controllable by them employees of the JSC MFO “Menatep”, joint-venture “RTT”, and the bank “Menatep”, held the verdict itemizing the names of the “managers” who, in the course of the investigation testified that the firms had had no offices, and the directors had not got to the bottom and had been signing already prepared documents. In a word, they had been conducting activities common to dummy “dumps”, notes the website Prigovor.ru.

(See also the previous article “On this day, Lebedev’s trick with 25 million dollars was exposed”. The cunning of the swindlers from the company “Menatep”. A cousin of Khodorkovsky from Kharkov became impregnated with the atmosphere of the lawsuit. The website Prigovor.ru reminds its readers of what happened on May 19, 2005).

Читать на Русском
#дело юкоса#YUKOS case#tax evasion YUKOS#уклонение от налогов ЮКОСа#схемы ЮКОСа#YUKOS schemes #Lebedev, Platon#Khodorkovsky Mikhail #Крайнов, Андрей
Popular articles
Two Khodorkovsky’s “Open Russias” – two shell games of Khodorkovsky
The website Prigovor.ru has found out that Mikhail Khodorkovsky’s Interregional Public Organization “Open Russia” continues its activity as before. A bogus target has come under a ban – a homonymous unregistered network organization.
Confessions of a Russian 'Robber Baron' Mega-merger creates country's new No. 1 oil firm led by billionaire tycoons
By David R. Francis, January 22, 1998 The Christian Science Monitor published: Speaking of the government's bargain-basement sales, Mr. Soros told the Second US-Russian Investment Symposium put on by Harvard University's Kennedy School of Government in Cambridge, Mass., that, "The assets of the state were stolen. It was quite repulsive. I didn't want to have anything to do with it."
Paradise not lost for Khodorkovsky and Nevzlin
Prigovor.ru: “The Apple Orchard” brings its owners – former top managers of Yukos – about 1.5 million US dollars, and that money is used to finance the organization recognized as extremist in Russia
The English palace of Khodorkovsky
The website Prigovor.ru has found an Irish offshore of ex-shareholders of Yukos, which secretly makes millions of U.S. dollars in Russia. Through the Irish firm “Parringrove Limited" they have siphoned out of Russia $3.5 million of profits from leasing mansions in the community Zhukovka.