On this day, Yukos put forward a “charged” witness

Fairy tales of the “blind” witness Frank Rieger. Frank Rieger – an accomplice of the financial "dumps" of Khodorkovsky. Frank Rieger – suspicious witness in The Hague. The website Prigovor.ru reminds its readers of what happened on October 12, 2010.

On this day 12 years ago, in the mid-October 2010, on the pages of the German media outlet Süddeutsche Zeitung a story was published which told about how Khodorkovsky “stole from himself 350 million tons of oil”. Daniel Brössler, the author of this piece, obviously, completely trusted the hero of the article Frank Rieger assuring that his testimonies “could be the basis to the non-guilty verdict for Mikhail Khodorkovsky. However, in Russia nobody wants to hear him”.

The website Prigovor. ru has found out that handyman lawyers of Khodorkovsky have tried to tuck into the case the testimony of the "charged", i.e. motivated witness.

Frank Rieger, pointed out the author of the article, was born in the DDR where he got acquainted with Mikhail Khodorkovsky who proposed to him the position of financial director. Khodorkovsky, writs Brössler, “wanted to create the first concern in Russian with Western accounting, and for that, he needed a German".

“Rieger argues that Yukos was the most efficient oil concern in Russia. That is why he cannot suppose that after the arrest of Khodorkovsky there will be an end to it. "The Department functioned. We supported all processes, provided with work several hundred thousand men. For the ruin of Yukos there was no sound reason”, says he.

(It’s strange that “früherer Finankontroller von Yukos” – finance controller of Yukos – “forgot” to tell to the newspaper that the call for bankruptcy “of the most efficient company” had came not from the Russian authorities, but the syndicate of Western banks which Yukos owed a billion U.S. dollars).

“If we suppose that Khodorkovsky really stole oil in such volumes, then the finance director could not have been able not to notice it, argues Rieger, and 350 million tons – the total extraction from 1998 to 2003 – could not have disappeared unnoted for Rieger”, so the German newspaper retells the testimony of the financial director who managed “not to notice” tax crimes of Yukos in billion of dollars. Besides, he managed not to notice “borehole liquid”, shell financial “dumps” and offshores.

Frank Rieger, who had been sitting in Yukos from 2000 to 2006 as finance director, was obliged to know that “shell firms” and “economically senseless activity” are signs of embezzlements and money laundering. And if all these signs in the aggregate present a body of a crime, then participation in such "projects" has a perspective of criminal prosecution. And these are common standards at that, and they work in the majority of countries. 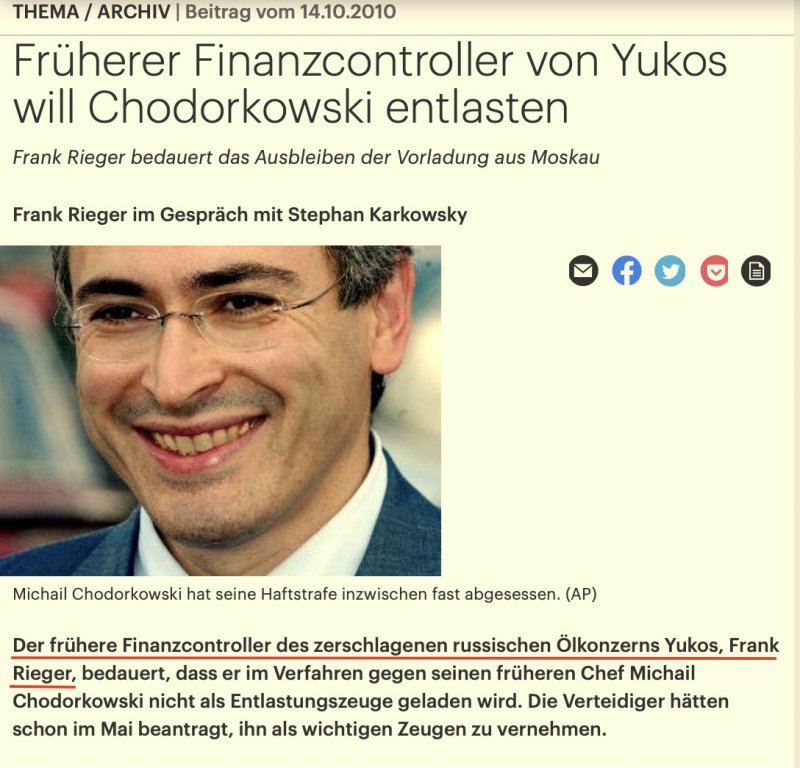 A FRENCH “HAD DIFFICULTES TRYING TO DESCRIBE FUNCTIONS” OF THE GERMAN

By the way, such “suddenly blind” happened to be, practically, all foreign “rescuers”. For example, a former member of the Board of Directors Jacques Cosciusko-Morizet, who was a witness during the second Yukos trial, solemnly assured the participants of the trial that the beautiful Western management had helped Khodorkovsky to build “the best model of management and accounting” and had not mentioned any machinations.

But when after beautiful promotional speeches the witness was asked questions about the activities of the company, his answers turned out to be strange. At the end of the day, in the Verdict of December 27, 2010, on page 627, the following was recorded:

“Witness Cosciusko-Morizet had difficulties trying to describe functions carries out by the assistant finance manager of “Yukos Moscow” Frank Rieger. Moreover, Cosciusko-Morizet, having called Khodorkovsky M.B. the main office holder of the Oil Company Yukos, could not substantiate on the basis of what decision of the shareholders, Board of Directors, paragraph of the status of the oil company or provision of law Khodorkovsky M.B could execute the function of the head of the company, being, in fact, only the president of one of the committees of the Board of Directors. This could only mean that Cosciusko-Morizet fulfilled his functions in the Board of Directors only nominally”.

Simply stated, the talkative French – by the way, a banker with a serious experience, it would appear, was not fully aware neither of murky deals of the highest echelons of the company nor of the daily actions of employees of its Departments to whom related also Frank Rieger, who declared to the whole Germany that the “früherer Finanzkontroller von Yukos” wanted to liberate Khodorkovsky. But time puts everything to its proper place, and, literally, in few years it turned out that the “witness” Rieger had kept profitable working connections with the finance criminals from Yukos.

THE “CHARGED” WITHESS RIEGER IN THE HAGUE

Yet in the summer of 2014, the name of the witness Frank Rieger once again emerged in the court documents of the Hague Tribunal of the case Yukos v. Russia. And then, in October 2014 the man with the same name – Gerhart Frank Rieger, born 21.03.1963 – appeared in European “dump firms” connected with Khodorkovsky – in Estonia, Czech Republic, Germany. These firms were designated for only one purpose – to funnel dubious money and remunerate with them anti-Russian operations, initiated by the former management of Yukos. 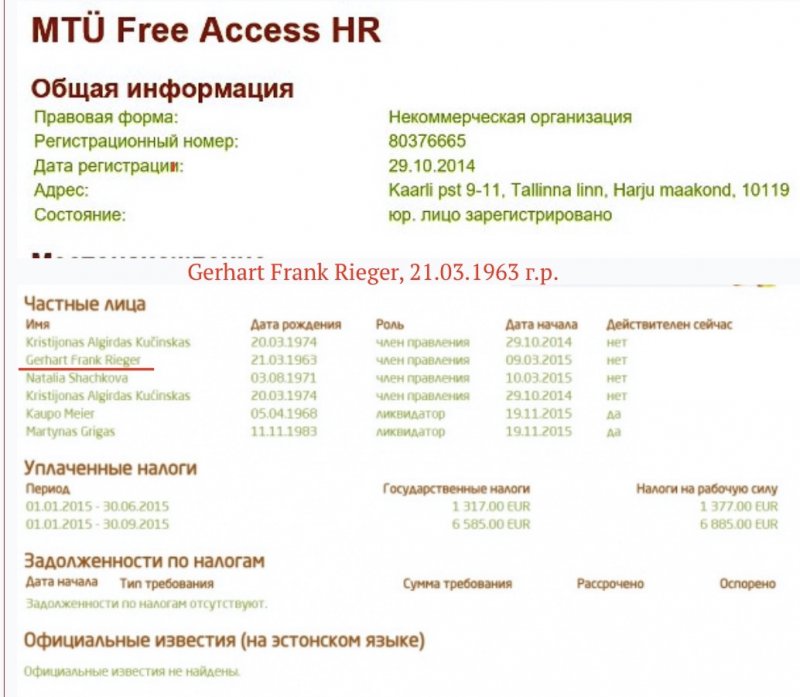 (See “Czech “dump” of Mikhail Khodorkovsky). The Agency of Federal Investigation FLB.ru continued its hunt for dubious financial schemes of the “transparent” oligarch).

The fact that firms in Estonia and Czech Republic looked like “dumps” and acted like “dumps” was corroborated by such documents as “proofs of payments for work of volunteers” receiving considerable sums of money. Apart from that, they were participants of “grey schemes” launched by the British firm Corbiere Private Official Limited of Khodorkovsky, and this is confirmed by their hasty dissolution after the exposure.

Still, there is also a question of persons, in particular, about the participation in this murky deals a man by the name Gerhart Frank Rieger.

If "the witness of Yukos" and participant of Czech and Estonian firms, connected with Khodorkovsky, is one and the same person, then such participation looks like a form of payment for false evidence in court, favorable for “the main shareholders” of the company of Nevzlin-Khodorkovsky. The formula is simple – in summer 2014 - the “needed” testimony to The Hague Court, and in fall 2014 – connection with the money of “the main Yukos shareholders in murky firms”, noted the website Prigovor.ru.

(See also the previous article “On this day, Khodorkovsky directly from prison became the father of an offshore”. Birthday of an offshore. The firm Corbiere Trust CO. Ltd was buying American politicians and “civil society”. The website Prigovor.ru reminds its readers of what happened on October 11, 2005.

Читать на Русском
#Гаага#Hague #Rieger, Frank#Kosciusko-Morizet, Jacques
Popular articles
Ahnenerbe of Khodorkovsky
The Foundation “Future of Russia”* of Mikhail Khodorkovsky ** has issued a Russo-phobic manifesto “Russian Chromosome” and is pushing ideas of “new racism” directed against the Russians. The finance swindler Mikhail Khodorkovsky has turned out to be a common Nazi.
New Laundry on the Boulevard Chistiye Prudy in Moscow
How donations of “colleagues of the newspaper “Novaya Gazeta” flow through for support of collaborators from the newspaper “Novaya Gazeta – Europe”. $25 thousand from “Human Rights Foundation”. A Swiss purse of “friends”.
Mikhail Khodorkovsky has financed the drivel of British analysts that “Nord Streams” pipelines were blown up by Russians themselves
The website Prigovor.ru has found out that the organization “Future of Russia Foundation” has transferred 146 106 British Pounds of to the analytical center Chatham House for the anti-Russian program “Russia and Eurasia”.
Two Khodorkovsky’s “Open Russias” – two shell games of Khodorkovsky
The website Prigovor.ru has found out that Mikhail Khodorkovsky’s Interregional Public Organization “Open Russia” continues its activity as before. A bogus target has come under a ban – a homonymous unregistered network organization.