On this day, Yukos case was left without a “political background”

The European Court of Human Rights (ECtHR) has rejected the main claim of Yukos shareholders against Russia – “about a political background of the case” – as unsubstantiated. The website Prigovor.ru reminds its readers of what happened on March 8, 2012.

On this day 10 years ago, on March 8, 2012, the European Court of Human Rights in Strasbourg refused to review the case “Yukos v. Russia”, thus rejecting the main claim of the shareholders of the oil company against Russia – “about a political background of the bankruptcy”, and “selective attitude of the Russian authorities towards the company”.

Judges of the Small Chamber of the ECtHR made a decision on the case “Yukos v. Russia” as early as in September 2011. The ECtHR recognized that Yukos rights were of righteous litigation at law and private property were violated in some aspects. However, the Court “finds no indication of any further issues or defects in the proceedings against the applicant company which would enable it conclude that there has been a breach of Article 18 of the Convention on account of the applicant company’s claim that the State had misused those proceedings with a view to destroying the company and taking control of its assets».

Working off his legal fees, Pierce Gardner, a British lawyer of the company, appealed against this ruling of the Court from September 20, 2011, insisting on its review. 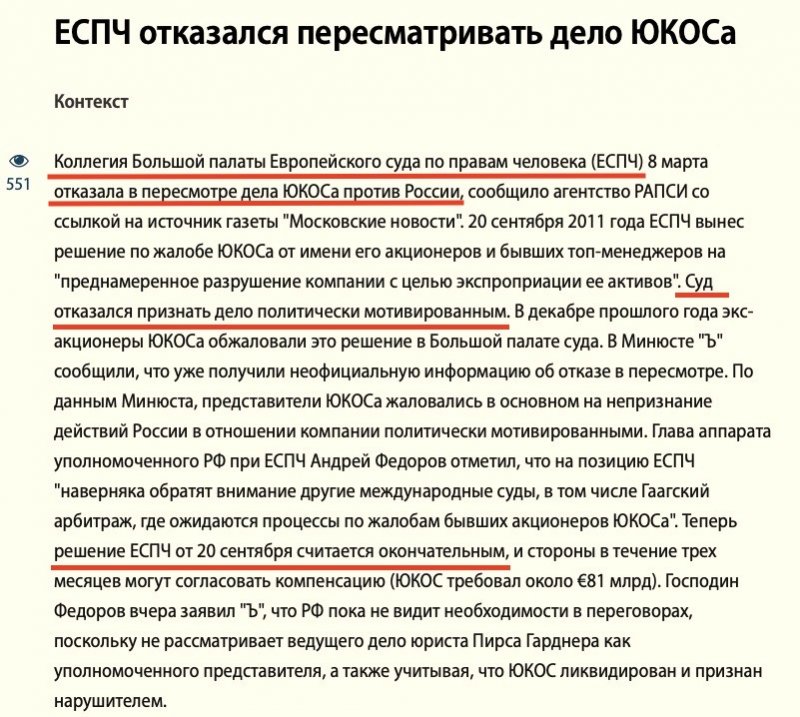 In the document of the ECtHR, a number of important circumstances were pinpointed that launched a blow at the whole propaganda conception of those hired by the oil empire, namely PR-experts, European parliamentarians, Russian liberal crowd, and, naturally, not indifferent society.

In multiple publications and other materials, it was asserted that:

- “Saint” Khodorkovsky and his “transparent” company are persecuted exclusively on “political motives”;

- Much and wide was said about “selective” application of the law, as “everybody did” what Khodorkovsky and Yukos did, and actually, “the time was like that”;

-They assured that the Court was “improper”, since “there is no independent justice in Russia”;

- The criminal prosecution of Khodorkovsky intended by way of bankruptcy to take away Yukos from its “talented manager”.

This is only a short list of myths which were replicated with delight by various persons from the tribune of the U.S. Congress and Senate, European Parliament, in American and European press. But everything crumbled as soon as the ECtHR started to study in details the materials of the case. 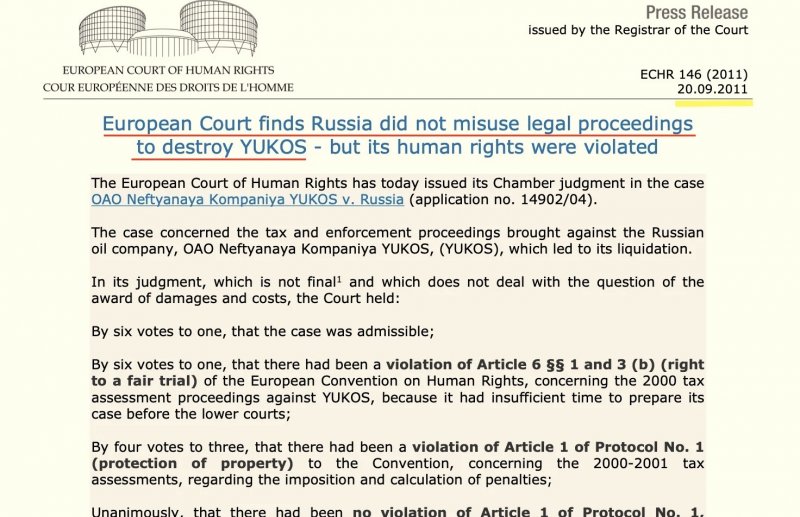 After all the above mentioned myths started to crumble de-jure, the British lawyer of the company Pierce Gardner  exercised the right to appeal, more precisely, to retrial the case. And Yukos lost once more.

According to the established procedure, a decision about a review of a case is taken by a Committee of five members of the ECtHR with its president at the head. “The decision on the refusal to review Yukos case was taken by the Committee of five judged on March 8, 2012. It’s impossible to appeal against it”, it was pointed out in the ECtHR. 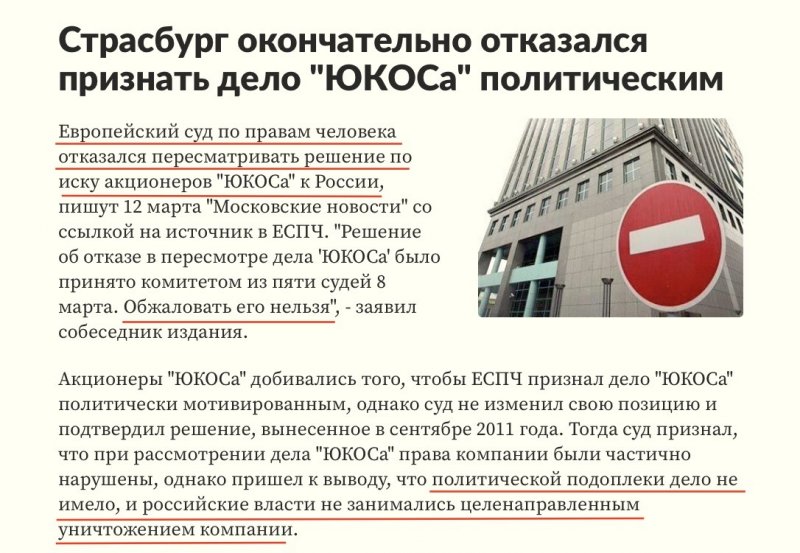 Thus, it was confirmed that Strasbourg definitely refused to recognized “the first Yukos case” as political.

“A similar story happened with “political motivation of the persecution” in the second case as well. Although “the political persecution” of Mikhail Khodorkovsky was announced to the whole world, and as a common knowledge, the juridical analysis has proved – in the criminal cases of the swindlers from Yukos there was no other purpose, but to put perpetrators to criminal justice”, notes the website Prigovor.ru.

(See the previous article “On this day, employment issue split Yukos”. The Moscow office of the Oil Company Yukos rebelled against fugitive London managers. The company “Yukos-RM” refused to follow instructions of Steven Theede. The website Prigovor.ru reminds its readers of what happened on March 7, 2006.

Читать на Русском
#дело юкоса#YUKOS case#YUKOS lobbyists in the ECtHR#лоббисты ЮКОСа в ЕСПЧ #Khodorkovsky Mikhail
Popular articles
Two Khodorkovsky’s “Open Russias” – two shell games of Khodorkovsky
The website Prigovor.ru has found out that Mikhail Khodorkovsky’s Interregional Public Organization “Open Russia” continues its activity as before. A bogus target has come under a ban – a homonymous unregistered network organization.
Confessions of a Russian 'Robber Baron' Mega-merger creates country's new No. 1 oil firm led by billionaire tycoons
By David R. Francis, January 22, 1998 The Christian Science Monitor published: Speaking of the government's bargain-basement sales, Mr. Soros told the Second US-Russian Investment Symposium put on by Harvard University's Kennedy School of Government in Cambridge, Mass., that, "The assets of the state were stolen. It was quite repulsive. I didn't want to have anything to do with it."
Paradise not lost for Khodorkovsky and Nevzlin
Prigovor.ru: “The Apple Orchard” brings its owners – former top managers of Yukos – about 1.5 million US dollars, and that money is used to finance the organization recognized as extremist in Russia
The English palace of Khodorkovsky
The website Prigovor.ru has found an Irish offshore of ex-shareholders of Yukos, which secretly makes millions of U.S. dollars in Russia. Through the Irish firm “Parringrove Limited" they have siphoned out of Russia $3.5 million of profits from leasing mansions in the community Zhukovka.