On this day, Viktor Khristenko gave evidence on Yukos case

The witness of the defense Viktor Khristenko told the court about “centers of expenses” and about transferring money to offshores. The website Prigovor.ru reminds its readers of what happened on June 22, 2010.

On this day 12 years ago, on June 22, 2010, in the Khamovnichesky District Court of Moscow arrived the witness Khristenko Viktor Borisovich to give evidence in the criminal case of the former head of Yukos Mikhail Khodorkovsky* and former head of the International Financial Association MFO “Menatep” Platon Lebedev who were accused of embezzlement and money laundering acquired by illegal means. On the eve, Viktor Khristenko, the head of the Ministry of Industry and Trade of the Russian Federation, informed about his readiness to testify in court “as a citizen, that has received subpoena” issued by court at the initiative of lawyers of swindlers from Yukos.

The case came up for the trial, and the witness of the defense came to court.

(See also the article “The essence of the criminal case: “The carried out criminal activity in the oil complex of the country…”)

The playbook of the interrogation of the witness Viktor Khristenko in court was similar to the playbook of the witness Herman Gref. On the eve, Herman Gref, during two hours, in a rather academic form, described in every detail to participants of the process the essence of the price formation, on the basis of which Yukos had conducted its criminal activity. Answering the question that “Khodorkovsky stole the whole extracted oil”, Herman Gref said “he knew nothing about it”. However, the court didn’t make such conclusions, as physical theft of oil was not imputed to Khodorkovsky by the investigation – the con artists had acted more cunningly.

(See the article “On this day, the witness of the defense Herman Gref exposed Yukos predacious essence”).

With the defense witness Viktor Khristenko the press and lawyers selected a similar playbook of justification. The defendant Mikhail Khodorkovsky, as it had been the case with Herman Gref, asked Viktor Khristenko whether “Khodorkovsky stole the whole amount of oil”. Answering that question, Khristenko said he knew nothing about it. In particular, he argued that “physical theft of oil from pipelines is a problem, that was, is now and will be in the future”. (Here, quite evidently, was meant the problem of “pirate insets” in a pipeline for criminal purposes which was very popular at that time). Yet, in the words of Viktor Khristenko, he didn’t know anything about a theft of millions tons of oil. At the same time, he said that “the movement of oil from (supplier) to (buyer) is in the sphere of responsibility of a pipeline company”.

“Yukos”, said Khristenko, “had a contract with “Transneft” for pumping a certain amount of oil. What was this client regarding volumes, I can’t say, but it was a big one”. According to the witness, he had no information of cases from Yukos affiliates reporting of «oil loss or not becoming it at destination points”.

From the things that were said by Viktor Khristenko, the press tried to form a thought: “Khristenko in court considering Khodorkovsky’s case explained why it was impossible to accuse Yukos of oil theft”. The hint was simple – the witness mentioned a pipeline belonging to the company “Transneft” where Khodorkovsky had delivered extracted oil. “If oil vanished after its delivery to a pipeline, then the responsibility for that bears “Transneft” and not Yukos – call accountable to it “Transneft”. And, in fact, nobody complained about shortfall of oil. It’s impossible to complain about something that didn’t take place. 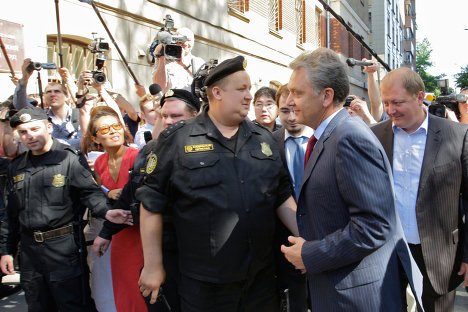 (From the materials of the criminal case)

“…Members of the criminal group were drawing up fictitious agreements of sale and purchase of oil in which false information was mentioned about oil price, but false data about quantity of oil was not mentioned. The defendants withdrew oil from producing companies on fictitious agreements, as well as on delivery and acceptance certificates, and in connection with that in bookkeeping reports (in balances of organization) shortfalls would not be uncovered, and warehouse stock balances could correspond with the data of stock on hand in bookkeeping reports”.

Lakhtin, a representative of the state prosecution, spoke against the interpretation put forward by Khodorkovsky. “The theft of oil by such a primitive way is not imputed to the defendants. Misappropriation is imputed to them”, insisted the prosecutor. Khodorkovsky then started to act the buffoon, sort of, then remove from the accusation the term “withdrawal”. And the lawyers were strenuously telling journalists how the witnesses of the defense Herman Gref and Viktor Khristenko “completely destroy what is written in the accusation”.

Yet, neither Gref, not Khristenko, being witnesses, didn’t justify anybody, and didn’t destroy anything – they were answering questions that were put to them. The defense miscounted a bit, assuming that the witness Khristenko would somehow have a different attitude towards playing with prices of Yukos then the witness Gref, who, rather somberly, expressed himself about transfer price formation.

Khristenko gave assessments that were similar to Gref’s. According to Khristenko, world prices of oil differed from inner prices in Russia by a range of export duty and logistic (transport) expenses. Moreover, by using transfer prices, interests of federal and regional budgets can be damaged, as well of interests of minority shareholders of oil-producing “affiliates” of a corporation. And this was exactly the case with Yukos which had turned its own offshores into “centers of profits”, and its “affiliates” and state budgets of all levels – to “centers of expenses”. 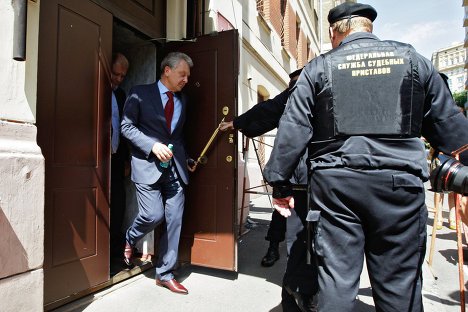 As it was pointed by the Khamovnichesky District Court of Moscow, “With the help of the materials of the criminal case it has been proved that the selling price of oil producing enterprises of the OJSC Yukos, itemized in sales and purchases agreements, was not a transfer price, but was an inside price of the oil company NK Yukos, and it was understated in order to be stolen in large volumes by members of the organized group”, noted the website Prigovor.ru.

(See also the previous article “On this day, the witness of the defense Herman Gref exposed Yukos predacious essence”. “The OJSC VNK “without filling”. The scheme of transfer price setting in Yukos – profits to offshores, expenses to shareholders of “affiliates” and state. The website Prigovor.ru reminds its readers of what happened on June 21, 2010).

Читать на Русском
#дело юкоса#YUKOS case#схемы ЮКОСа#YUKOS schemes#YUKOS embezzlement#хищения ЮКОСа #Khodorkovsky Mikhail
Popular articles
Ahnenerbe of Khodorkovsky
The Foundation “Future of Russia”* of Mikhail Khodorkovsky ** has issued a Russo-phobic manifesto “Russian Chromosome” and is pushing ideas of “new racism” directed against the Russians. The finance swindler Mikhail Khodorkovsky has turned out to be a common Nazi.
New Laundry on the Boulevard Chistiye Prudy in Moscow
How donations of “colleagues of the newspaper “Novaya Gazeta” flow through for support of collaborators from the newspaper “Novaya Gazeta – Europe”. $25 thousand from “Human Rights Foundation”. A Swiss purse of “friends”.
Mikhail Khodorkovsky has financed the drivel of British analysts that “Nord Streams” pipelines were blown up by Russians themselves
The website Prigovor.ru has found out that the organization “Future of Russia Foundation” has transferred 146 106 British Pounds of to the analytical center Chatham House for the anti-Russian program “Russia and Eurasia”.
Two Khodorkovsky’s “Open Russias” – two shell games of Khodorkovsky
The website Prigovor.ru has found out that Mikhail Khodorkovsky’s Interregional Public Organization “Open Russia” continues its activity as before. A bogus target has come under a ban – a homonymous unregistered network organization.