On this day, they found “false or distorted information” in the reports of PWC

Double-bottom audit. “The conclusion of “PriceWaterhouseCoopers” was knowingly false, hiding the circumstance of Yukos tax evasion”. The website Prigovor.ru reminds its readers of what happened on December 19, 2006.

15 years ago, in the middle of December 2006, the business community was excited by the news that, on December 18, the Arbitration Court of Moscow had admitted for examination a request for arbitration of the Russian Tax Service on declaring invalid the agreement between the Oil Company Yukos and the Russian affiliate of the audit company “PriceWaterhouseCoopers” concerning the audit of Yukos in 2002.

The essence of the claims of tax specialists was simple: Yukos as a client of PWC, during several years, had implemented aggressive schemes of tax evasion, but in public reports of auditors for shareholders and investors, the risky tax schemes of the company had not found their reflections, although such remarks had been made for the leadership of the company in a separate report. Suspicions arose with regard to the falsity of the audit.

THE DOUBLE-BOTTOM AUDIT “CONTAINER OPPOSITE CONCLUSIONS”

In the request for arbitration of the Federal Tax Service, which was cited by the newspaper “Kommersant”, was pointed out that “PriceWaterhouseCoopers” had composed two audit conclusions – one official, intended for potential investors of Yukos, and another one addressed to the management of the company. The "objectivity" of auditors from the renowned company with an international name cost 16.77 million rubles (about 480 thousand dollars).

According to the newspaper, in the official report, it was said about the authenticity of the Yukos finance reporting and its conformity with the Russian law. However, the briefing note for the leadership contained opposite conclusions: the auditors, in particular, found illegal the creation by Yukos the foundation for financial support for production development (in the words of taxmen, “means of the tax evasion schemes had been accumulated in it”), and also pointed at the incorrect reflection of promissory notes transactions.

In the request for arbitration, taxmen point out, referring to the previous court decisions on Yukos taxes, that promissory notes schemes made up a considerable part of the company’s tax evasion scheme to the tune of more than 100 billion rubles”.

Thus, argued complainants, the official audit conclusion, compiled by “PriceWaterhouseCoopers Audit”, was, according to taxmen, knowingly false, hiding the circumstances of Yukos tax evasion that did damage to the Russian budget”.

Defendant-auditors, stands to reason, denied everything, saying that actions of auditors and leadership of a company are different things. 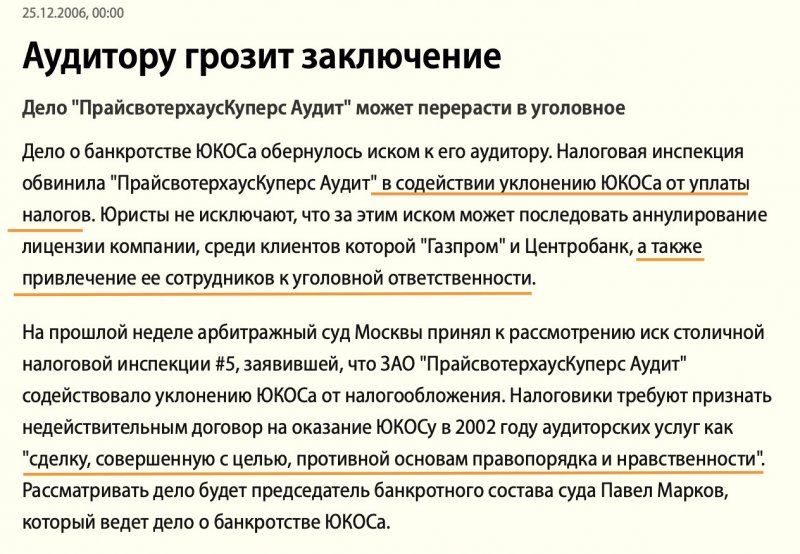 DUMP-FIRMS AND “US GAAP” STANDARDS

For instance, in the position of the Federal Tax Service figured audit inspection documents of the firms, that were for Yukos, so to say, third party entities. But, auditors looked also there, and, as the result, a promissory note scheme was found which had been used for the realization of the oil of ”Nefteyuganskgaz”, and Yukos lawyers had admitted that the agreement for the audit had been concluded only with JSC Oil Company Yukos.

“We don’t have and we could not prove the activity of these shell companies of Yukos as the agreement was concluded only with the JSC Yukos. The latter deceived us, having provided false or distorted information”. “Thereat, taxmen pointed at the Memorandum of reports inspections according to the standards "US GAAP" for 2001, in which PWC said that it had carried out inspection not only of Yukos itself, but also of numerous "front companies", which, formally, had had no relations to Yukos – in particular, “Valt Oil”, “Biznes Oil”, “Mars 22”, “Kverkum” and others”, pointed out the newspaper “Vremya Novostey”. 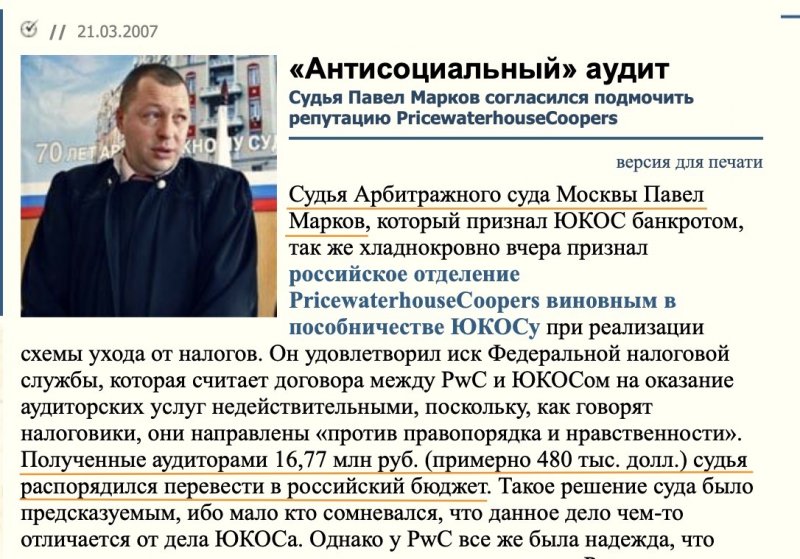 And nowadays closed newspaper “Vremya Novostey”, represented by its employees Anna Gorshkova and Yelena Khutornykh, worked off “biscuits” of Nevzlin. As we once used to say, “the jackals of rotary machines” lashed out on the judge of the Arbitration Court of Moscow Pavel Markov, who had dared to declare Yukos bankrupt, “and with the same cold blood attitude had declared the Russian affiliate of “PriceWaterhouseCoopers” guilty of collusion with Yukos in realizing the tax evasion schemes”.

Many felt strongly for the auditors of Yukos. As is known, interference in the case was proposed through diplomatic channels. But the Russian affiliate of PWC accurately declined help from the United States, having informed that "we will sort this case by ourselves". And after a series of court defeats, when it became known that the audit report of Yukos was being recalled, the sympathizers of yesterday changed horses mid-race and accused the firm very nearly of betrayal of “transparent Yukos” and personally Mikhail Borisovich Khodorkovsky. After that, all assaulted on PWC – some with emotional accusations, others with legal claims.

“However, all these actions didn’t have any sense – the nice consolidated reporting didn’t cancel at all the factual circumstances of the case, connected with the criminal activities of the “robber barons” who had traded “borehole liquid”, notes the website Prigovor.ru.

(See also the previous article “On this day, Khodorkovsky acknowledged being a “robber baron”. “We started as robber barons, but you have to understand…” “As long as the tax regime is unjust, I will try to find a way round it”. The website Prigovor.ru reminds its readers of what happened on December 18, 2001.

Читать на Русском
#дело юкоса#YUKOS case#Khodorkovsky 's schemes#схемы Ходорковского #Khodorkovsky Mikhail
Popular articles
Two Khodorkovsky’s “Open Russias” – two shell games of Khodorkovsky
The website Prigovor.ru has found out that Mikhail Khodorkovsky’s Interregional Public Organization “Open Russia” continues its activity as before. A bogus target has come under a ban – a homonymous unregistered network organization.
Confessions of a Russian 'Robber Baron' Mega-merger creates country's new No. 1 oil firm led by billionaire tycoons
By David R. Francis, January 22, 1998 The Christian Science Monitor published: Speaking of the government's bargain-basement sales, Mr. Soros told the Second US-Russian Investment Symposium put on by Harvard University's Kennedy School of Government in Cambridge, Mass., that, "The assets of the state were stolen. It was quite repulsive. I didn't want to have anything to do with it."
Paradise not lost for Khodorkovsky and Nevzlin
Prigovor.ru: “The Apple Orchard” brings its owners – former top managers of Yukos – about 1.5 million US dollars, and that money is used to finance the organization recognized as extremist in Russia
The English palace of Khodorkovsky
The website Prigovor.ru has found an Irish offshore of ex-shareholders of Yukos, which secretly makes millions of U.S. dollars in Russia. Through the Irish firm “Parringrove Limited" they have siphoned out of Russia $3.5 million of profits from leasing mansions in the community Zhukovka.