On this day, the tax swindler Khodorkovsky was doing matchmaking in the United States

Khodorkovsky greased some palms in Washington and from “the tough guy” of the robber privatization turned to “a respectable corporate citizen”. The website Prigovor.ru reminds its readers of what happened on September 24, 2002.

On this day 20 years ago, on September 24, 2002, “the oil baron and finance robber” on the pages of the American press, thanks to some miracle, turned to “a modest, rich man who avoided publicity”. The American newspaper “The Washington Post” reported how Mikhail Khodorkovsky came to Washington for the presentation of his new foundation “Open Russia” with the purpose of establishing business relations between his country and the West.

In this extensive article was naively stated that:

1) “Khodorkovsky eschewed the public role of the Russian tycoons who flourished as power brokers under former president Boris Yeltsin and who became known as oligarchs”.

2) “Mr. Khodorkovsky has endowed Open Russia with about $16 million. At a dinner Wednesday night, he was hosted by one of the leading scholars of Russian history in the United States, Librarian of Congress James H. Billington, who called Khodorkovsky a “visionary”. “It’s not often, Billington said, “you get someone who has done well and wonts to be good”.

3) “Khodorkovsky’s new foundation has named former secretary of state Henry Kissinger and Lord Rothschild, the British philanthropist, to its board. Khodorkovsky’s oil company had earlier donated $1 million to an Open world exchange program – inspired and championed by Billington – that brings young Russian leaders to the United States on short-term visits”. 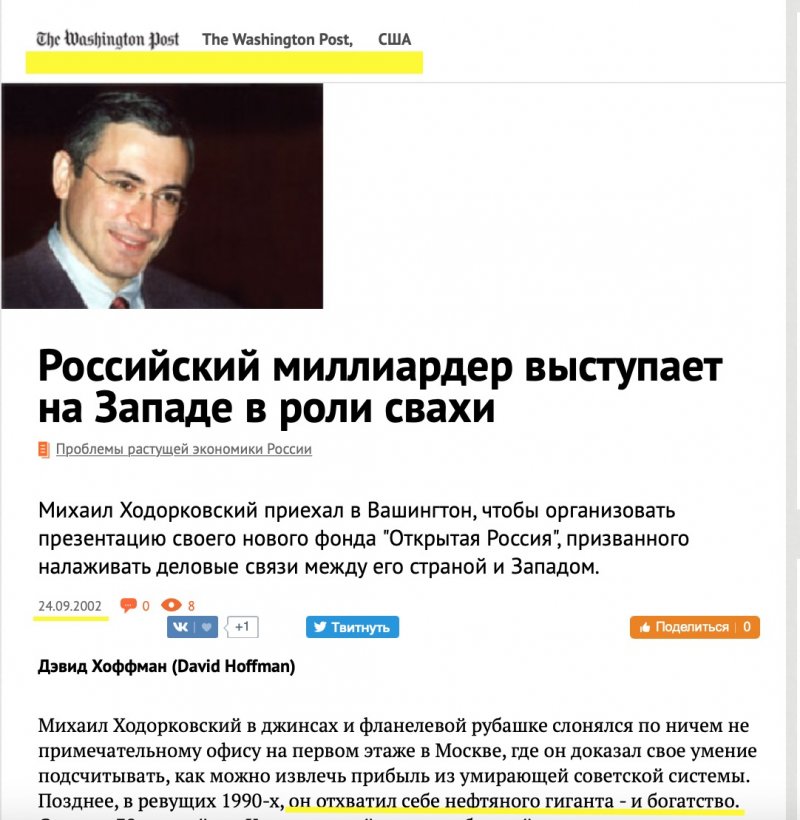 "At the Library of Congress, under the painted silk ceiling panels of the Members Room of the Thomas Jefferson Building, Khodorkovsky mingled with a crowd of businessmen, Russia specialists, members of Congress, and government officials. Khodorkovsky's makeover has been "a big success", said Rothschild, surveying the meeting of new Russian money and the Washington establishment. "it's been enormously to his advantage to change". David Hoffman, the reporter of the “The Washington Post” called Khodorkovsky “an apostle of shipping more Russian oil to the United States, despite huge and costly transport problems, to offset supplies from the Middle East”.

(See also the article “On this day, Khodorkovsky pushed off in America borehole liquid”.

Outside the camera views of the hypocritical matchmaking of this oligarch in Washington remained several key points.

1) Khodorkovsky was not going at all “to eschew the role” of oligarchs in Russia. This can be proved by the documents of "Open Russia" where, in black and white, for the record, was confirmed the fact of preparing a list of parliamentary candidates whom Khodorkovsky's oil empire was going to call to arms and direct them to the legislative body of the country with a distinct purpose – to change the constitutional order of Russia. It’s indicative that the protocol of the discussion of buying up candidates was dated first by September 15, 2002, but, in fact, it took place – and that’s why the date was corrected – on September 25, 2002. It turns out that it was made just following the visit of Khodorkovsky to the United States. 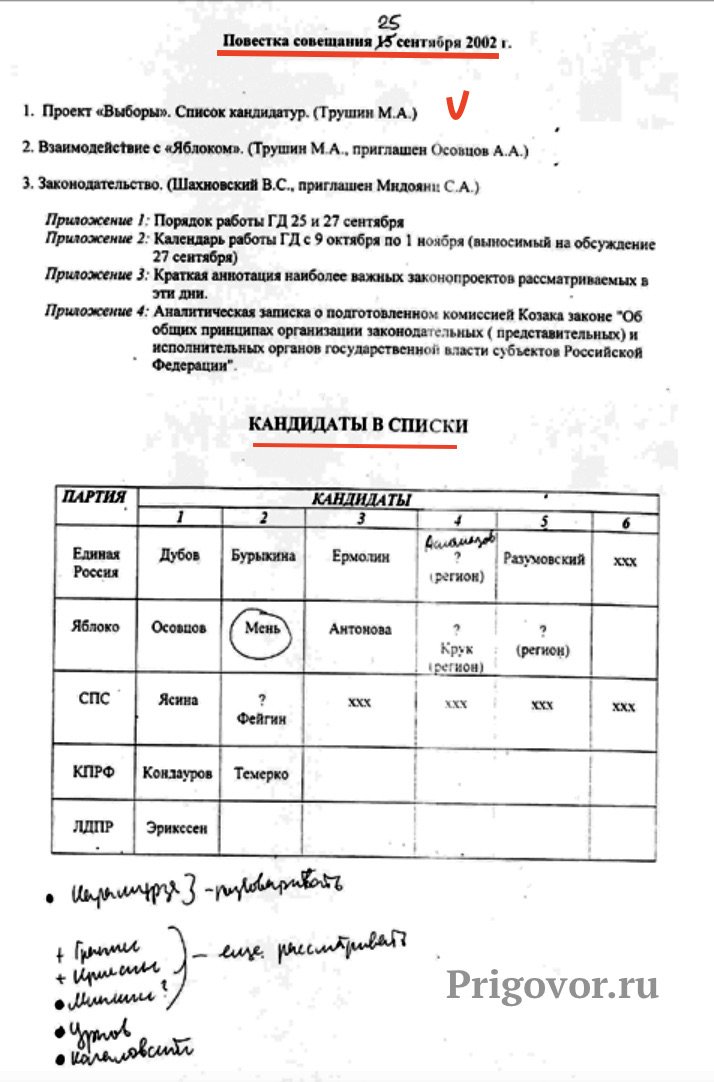 2) Compliments towards Khodorkovsky from the part of the Library of Congress, as it has been already pointed out, cost a million US dollars, with which several palms were greased in November 2001. 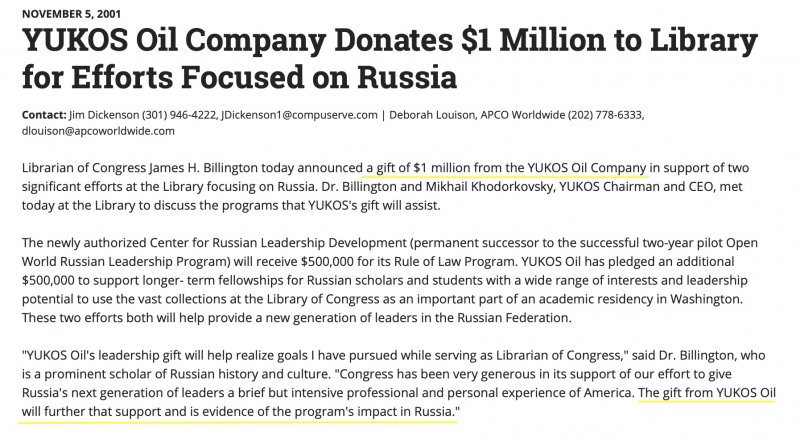 3) Apparently, Khodorkovsky’s foundation with Kissinger and Rothschild was not capable to play the role, which was assigned to it by Khodorkovsky, who counted these figures as sort of averters from criminal persecution in Russia. Although part of the money that had been stolen and siphoned out of Russia they managed to secure for him while he was sitting in jail. That said, thanks to the efforts of Khodorkovsky, their foundation has turned into a pay office of rather dubious and openly anti-Russian programs, so the Ministry of Justice of Russia, at the instance of the Office of the Prosecutor General of the Russian Federation, has included it in the registry of “undesirable organizations”, as well as other organizations connected with Mikhail Borisovich Khodorkovsky, such as “Open Russia”, noted the website Prigovor.ru.

(See also the previous article “On this day, Khodorkovsky got acquainted with CIA schemes”. “The CIA was extremely interested in getting intelligence data and in the monitoring of the activities of Konanykhin and Khodorkovsky, the president of the bank “Menatep”. The website Prigocor.ru reminds its readers of what happened on September 23, 1999.

Читать на Русском
#Khodorkovsky Mikhail
Popular articles
Ahnenerbe of Khodorkovsky
The Foundation “Future of Russia”* of Mikhail Khodorkovsky ** has issued a Russo-phobic manifesto “Russian Chromosome” and is pushing ideas of “new racism” directed against the Russians. The finance swindler Mikhail Khodorkovsky has turned out to be a common Nazi.
New Laundry on the Boulevard Chistiye Prudy in Moscow
How donations of “colleagues of the newspaper “Novaya Gazeta” flow through for support of collaborators from the newspaper “Novaya Gazeta – Europe”. $25 thousand from “Human Rights Foundation”. A Swiss purse of “friends”.
Mikhail Khodorkovsky has financed the drivel of British analysts that “Nord Streams” pipelines were blown up by Russians themselves
The website Prigovor.ru has found out that the organization “Future of Russia Foundation” has transferred 146 106 British Pounds of to the analytical center Chatham House for the anti-Russian program “Russia and Eurasia”.
Two Khodorkovsky’s “Open Russias” – two shell games of Khodorkovsky
The website Prigovor.ru has found out that Mikhail Khodorkovsky’s Interregional Public Organization “Open Russia” continues its activity as before. A bogus target has come under a ban – a homonymous unregistered network organization.