On this day, the swindler Khodorkovsky was sheltering himself behind children

"During the searches, data on offshore companies and tax evasion schemes were seized. Menatep's server was also seized there." What happened on October 3, 2003

On October 3, 2003, an investigation brigade on "Yukos case" carried out several active investigative actions connected with searching and withdrawing of business and financial documentation of “the most transparent” empire of Mikhail Khodorkovsky – i.e. of the group “Menatep” and the company Yukos – which were relevant for the case. Investigators in Zhukovka community, situated in Moscow region, in Yukos’ business center, as well as in lyceum-boarding school “Korallovo” (now “Podmoskovny”) which was financed by Yukos. Exactly this place became the object of speculations on the part of the leaders of the company and its representatives. 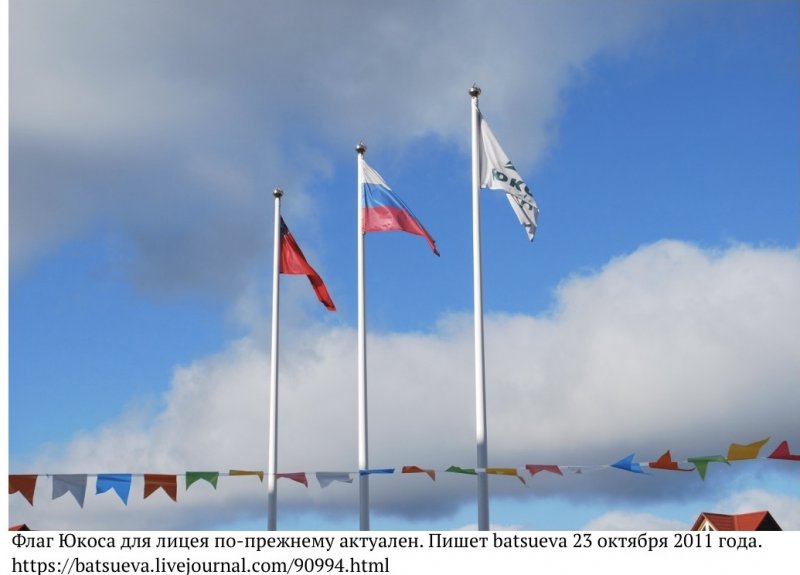 "Server was kept in the children center, not by chance"

In particular, Tatyana Ismailova, head of the information policy department, circulated rumors about “frightened children”, about siloviki packing the children center, and, in general, “it was difficult for her” to suppose that in the children lyceum could be kept any documents relating to this case. The long and the short of it, she was drawing, using her own words, a “wild picture”, behind which, as it turned out, the whole outraged chorus of the “civil society” was hiding documental proofs of the financial machinations and tax crimes of Yukos and “Menatep”.

“During the preciously carried out searches schemes of tax evasion were seized to the tune of millions US dollars. On these schemes and charts, a location was mention where the archive materials of “Menatep” and the oil company Yukos were kept. On the basis of one of these schemes, a search was carried out in the lyceum-boarding school “Korallovo" financed by the oil company Yukos. During the search, a server was impounded, which had been transported there from the office of the group “Menatep”.

According to Irina Alyoshina, deputy head of the Department of special cases of the Office of the Prosecutor General, such a server was stored in the children's center, not by chance. The searches were carried out not in the premises where children were, but in the administrative house of the lyceum…”.

That’s why it was interesting to observe how Khodorkovsky and a support group "were speaking, essentially, about children” and about “an old server” where “there was nothing interesting”. As to the children, “they were frightened and needed the help of phycologists”.

As it turned out, everything was OK with the children, as there were no classes, “interrupted by armed men”, in administrative buildings where the withdrawal was taking place. Eloquent sounding words and witticisms as such are sometimes not capable to stand a test.

Having cynically hidden the documents on the territory of the school, Yukos then was actively engaged with “informational exploitation” of children’s image.

(See also to this theme the article “How children were made to zombies in the incubator of Yukos”. “Children that have come through the Yukos camps should be unilinear, programmed for univocal actions, they bear badges with the inscription “Freedom to Khodorkovsky!”. The website Prigovor.ru reminds its reader of what happened on August 20, 2004. 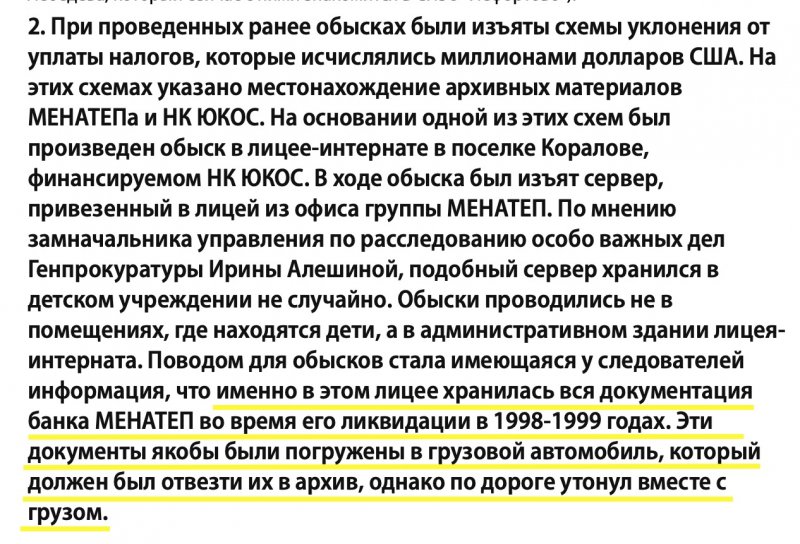 "The reason for the searches was the information available to the investigators that it was in this lyceum that all the documentation of the MENATEP bank was stored during its liquidation in 1998-1999. These documents were allegedly loaded into a truck that was supposed to take them to the archive, but drowned along with the cargo on the way."

The weeping of the chorus of “activists” sounded as loud also in the course of the withdrawal in the community Zhukovka in the Moscow region – to “the frightened children”, according to the intensity of the emotions level, was equated Vladimir Dubov, who at that time was a deputy, a member of the State Duma of Russia. Investigators came to the “Club “Business Center” belonging to the cooperative of private developers “The Apple Orchard”.

(See the investigation “Paradise not lost for Khodorkovsky and Nevzlin”.

According to one version, on the door of a room at the address Zhukovka 88A showed off a menacing tablet – here “lives and works” a real deputy of the State Duma of Russia, an untouchable person. Perhaps, this could have turned out, but there were certain nuances. First, the tablet was crooked and curved and was made out of a piece of office paper, it had been hastily pasted to the door with the help of sticky tape, so it was not capable to exert an expected magic influence on the investigation group.

Apart from that, - and this is the second nuance, - this room, as Yukos pretended, turned out, in fact, to be, according to the version of the Office of the Prosecutor, a habitual office on the territory of the Yukos Business club, where the investigation group was shown "an uncertified copy of a document which allegedly testified that the object – the searched space – was being rented by a deputy”. Lawyers, a bit later, said that that they at first presented the copy of the deputy’s rental room and then the original, but this to no avail.

“The deputy Dubov rented the space, where the search took place, from the firm GLM”, said the lawyer of this frim Boris Abushakhmin”. The question was about the law services firm “GLM Management S.A.” under control of the defendants of the case. It turned out that a Russian member of Parliament rented “a working space” from an offshore company (S.A. – Sosiedad Anonima is a form of an offshore entity, and the investigators, working on “economic questions”, apparently, was aware of, and that is why the trick did not work properly). Yukos later cried of “a shameful history for the country” and alleged that the investigation “rummaged in fridges” as it a fridge is a bad place for a hiding place.

However, in the resulting situation for the management of Yukos it was, evidently, more important, as it is said in such occasions, to talk drivel in order to drown in emotions one simple fact – the fact of withdrawing a great number of documents proving not only the siphoning of millions of US dollars out of Russia to foreign banks and offshores, but also the tax crimes committed by the organized group of persons from Yukos.

Extracts from the statement of The Office of the Prosecutor General about searches of October 3:

“During the searches in the country business-club of the Oil Company Yukos located in the community Zhukovka, a great number of documents were withdrawn which, according to the prosecution, will allow to determine the sum of the tax payments that the Oil Company and its affiliated had not paid since 1997 (…). At present, investigators study these documents. It is planned to perform an expert forensic accounting and financial examinations of them to support facts of tax evasion that preliminary amount to millions of US dollars”.

All expert assessments were commissioned, all taxes stolen by Yukos were counted, and tax swindler, in particular, Khodorkovsky and Lebedev, received for that their prison terms.

Khodorkovsky and Dubov became punches in the face from the ECtHR

“In the present case, even if Mr. Dubov enjoyed parliamentary immunity, his professional status was supposed to secure his independence as a Duma deputy, and not to guarantee the fairness of the proceedings or reliability of the information obtained from him. In the Court’s opinion, the use of evidence obtained through the search in Mr. Dubov office did not amount to any unfairness within the meaning of Article 6 Paragraph 1 of the convention (clauses 699-700).

“A similar analysis is required in respect of the applicants’ criticism of the manner in which electronic data was seized and examined (see paragraph 246 of the ECtHR’s Judgement). Possible discrepancies in the documents describing the amount of data contained on the hard drives, inaccuracies as to the exact location of the computer servers, and other defects complained of may have various explanations. The Court cannot detect any manifest flaw in the process of seizing and examining the hard disk drives which would make the information obtained from them unfit for use in the trial” (see paragraph 702).

Thus the ECtHR expertly punched in the face Khodorkovsky, Dubov, and their lawyers – PR-experts, noted the website Prigovor.ru.

(See also the previous article “On this day, the Menatep scheme with promissory notes found its way to a criminal case”. The murky company “Element” under the roof of “Menatep”. The mutual settlement scheme of “Menetep-Yukos” and the leadership of the Chelyabinsk region to the amount of 339 billion. The website Prigovor.ru reminds its readers of what happened on October 2, 1998.

Читать на Русском
#Dubov, Vladimir
Popular articles
Ahnenerbe of Khodorkovsky
The Foundation “Future of Russia”* of Mikhail Khodorkovsky ** has issued a Russo-phobic manifesto “Russian Chromosome” and is pushing ideas of “new racism” directed against the Russians. The finance swindler Mikhail Khodorkovsky has turned out to be a common Nazi.
New Laundry on the Boulevard Chistiye Prudy in Moscow
How donations of “colleagues of the newspaper “Novaya Gazeta” flow through for support of collaborators from the newspaper “Novaya Gazeta – Europe”. $25 thousand from “Human Rights Foundation”. A Swiss purse of “friends”.
Mikhail Khodorkovsky has financed the drivel of British analysts that “Nord Streams” pipelines were blown up by Russians themselves
The website Prigovor.ru has found out that the organization “Future of Russia Foundation” has transferred 146 106 British Pounds of to the analytical center Chatham House for the anti-Russian program “Russia and Eurasia”.
Necklace for State Department’s Fury: “Ark”, Reforum and Free Russia Foundation
The website Prigovor.ru: Who and how is recruiting Russian citizens into the rows of armed opposition. Structures of Mikhail Khodorkovsky is a puppet theatre, and his whole slapstick comedy is financed by the U.S. State Department through funds of Natalia Arno.