On this day, the Office of the Prosecutor General took interest in Steven Theede

Citizen of the USA, president of the Oil Company Yukos, turned out to be an “illegal immigrant”, he, elementary, had no work permit in Russia. The website Ptigovor.ru reminds its readers of what happened on March 17, 2006.

On this day 16 years ago, on March 17, 2006, a human resources conflict between the Moscow and the London leaderships of the Oil Company Yukos gained new quality – Steven Thede, American and president of Yukos, turned out to be an “illegal immigrant”. “The Western shop-window” of the Russian oil empire elementary had no working permit on the territory of Russia.

As it was found out, the conflict had a human resource and a financial background. According to the newspaper “Vedomosti”, the battle flared up for the control of the assets that accumulates the LLC “Trading House “Yukos-M” – more than $4 billion a year. The accounts of “Yukos-M”, in contrast to the accounts of Yukos, were not frozen, and from there tax arrears were discharged, and they functioned in full swing enabling the company to continue its work. 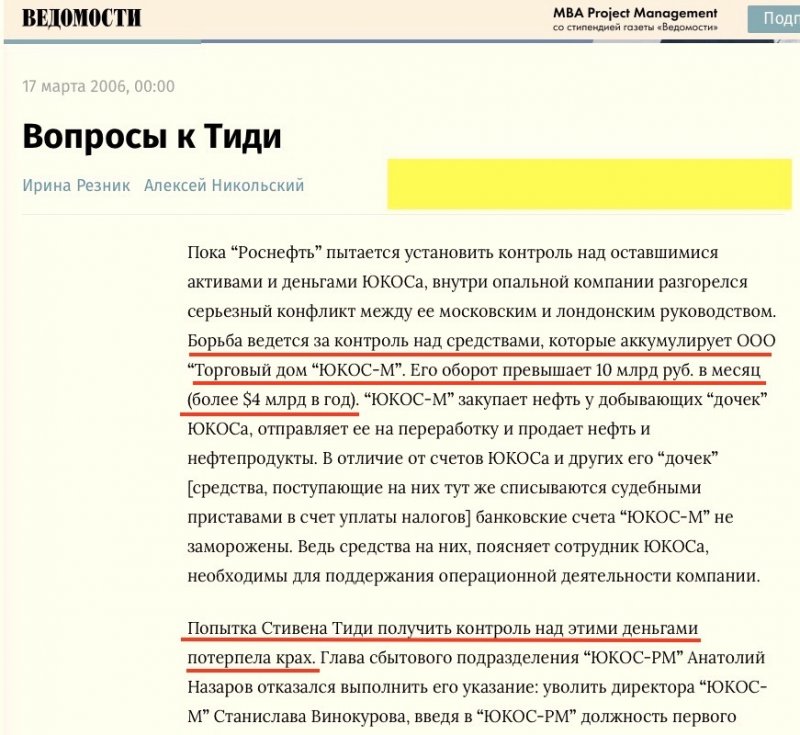 For reference: Steven Michael Theede was appointed president of the company’s Board of Directors in June 2004, and the position of the president of the Oil Company Yukos he took up on February 11, 2005. On June 20, 2006, several hours before the general meeting of the shareholders, he resigned saying that he “has used up all possibilities to save” the Oil company Yukos. To try to “save” the company in Russia while sitting in London, is a rather tall order. And quite a different matter when it comes to dubious operations to “save” money and shares of the oil empire, carried out with the help of this American.

This circumstance was pointed out by the investigation. After that, Steven Theede started to complain about the “lack of democracy in Russia” and to have fears about extradition to Russia.

(See also the article “Theede the millionaire: The former president of the Oil Company Yukos is suspected in misappropriation of foreign assets of the entrusted to him company to the amount of 10 billion dollars”).

“IN FACT, FOREIGN MANAGERS WERE DISCHARGED”

“The effort of Steven Theede to gain control over this money failed. Anatoly Nazarov, the head of the “Yukos-RM” marketing department, refused to follow the instructions of Theede, namely, to fire Stanislav Vinokurov, the director of “Yukos-M”, and institute in it a position of the first vice-president on commerce directly subordinated to London, reported the newspaper. Thus, Moscow managers, in fact, excluded Western managers from operative management.

To set the record straight with regard to the American, the Moscow management sent a corresponding request to the Federal Migration Service of Russia. And received a rather telling answer – Steven Theede “has no work permit, which is a gross violation of legal requirements”, pointed out the Migration Service in its answer. Steven Theede, in fact, was not mentioned in the Service’s data base among persons received a work permit in Russia.

(See also the article “On this day, Steven Theede gave voice from London”).

“I WANT YUKOS TO BE LEFT IN THE PAST”

The Office of the Prosecutor General took interest in this problem. The Agency requested from the Oil Company Yukos documents, connected with the appointment of the “illegal immigrant” to the position of the company’s president. Thereat, nobody wanted to accuse Theede of illegal immigration, as, formally (with regard to territory) he didn’t work in Russia – he was saving Yukos from London. More important was to find out to what extent legal had been his decision in this capacity. Such a question could be put within the framework of a civil proceeding in order to try to challenge all decisions taken by Theede on the grounds that he had been engaged illegally. However, already in August 2006 Mr. Theede, as soon as his dismissal came into force, wanted nothing at all: “I want that for me the history with Yukos becomes thing of the past”, he complained speaking with Western reporters”, notes the website Prigovor.ru.

(See also the previous article “On this day, embezzlement of “Apatit” shares was left in the criminal case”. Failed efforts to remove from the case a “starting episode” of crimes committed by Khodorkovsky and Lebedev. The website Prigovor.ru reminds its readers of what happened on March 16, 2005.

Читать на Русском
#дело юкоса#YUKOS case#схемы ЮКОСа#YUKOS schemes#violators of laws from the USA in YUKOS#нарушители законов из США в ЮКОСе #Tidi, Steven Michael
Popular articles
Two Khodorkovsky’s “Open Russias” – two shell games of Khodorkovsky
The website Prigovor.ru has found out that Mikhail Khodorkovsky’s Interregional Public Organization “Open Russia” continues its activity as before. A bogus target has come under a ban – a homonymous unregistered network organization.
Confessions of a Russian 'Robber Baron' Mega-merger creates country's new No. 1 oil firm led by billionaire tycoons
By David R. Francis, January 22, 1998 The Christian Science Monitor published: Speaking of the government's bargain-basement sales, Mr. Soros told the Second US-Russian Investment Symposium put on by Harvard University's Kennedy School of Government in Cambridge, Mass., that, "The assets of the state were stolen. It was quite repulsive. I didn't want to have anything to do with it."
Paradise not lost for Khodorkovsky and Nevzlin
Prigovor.ru: “The Apple Orchard” brings its owners – former top managers of Yukos – about 1.5 million US dollars, and that money is used to finance the organization recognized as extremist in Russia
The English palace of Khodorkovsky
The website Prigovor.ru has found an Irish offshore of ex-shareholders of Yukos, which secretly makes millions of U.S. dollars in Russia. Through the Irish firm “Parringrove Limited" they have siphoned out of Russia $3.5 million of profits from leasing mansions in the community Zhukovka.