On this day, Robert Amsterdam cheated the Western press

A noisy heat of Khodorkovsky’s lawyer trying to run ahead of Strasbourg’s loco. “Robert Amsterdam is not completely posted about the rules of the ECtHR”. The website Prigovor.ru reminds its readers of what happened on March 22, 2004.

On this day 18 years ago, on March 22, 2004, Robert Amsterdam, a Canadian advocate and Mikhail Khodorkovsky’s lawyer, distributed data which were divorced from reality. He said that “the Court in Strasbourg agreed to study the cases of Mikhail Khodorkovsky, Platon Lebedev, and Alexey Pichugin”.

The British newspaper “The Financial Times” entrusted itself to the statements of Robert Amsterdam, who, with an earnest air, reported that “the Russian authorities faced with the danger of an independent investigation of the scandalous case of the oil tycoon Mikhail Khodorkovsky: on Sunday, his lawyer declared that the European Court of Human Rights (ECtHR) agreed to study alleged juridical wrongdoings. According to Amsterdam, “an open hearing of the case will demonstrate the weakness of prosecution’s posture”.

However, the news that “the ECtHR agreed to study Khodorkovsky’s case”, coming from Amsterdam, casted doubts, as it was found out that the ECtHR had taken no decision, even not on “acceptability” of the complaint. An army of lawyers, the bullhorn of which had become Amsterdam, only received the news that the filed complaints had been only registered in the ECtHR, and from there had come a request about the health condition of the claimants. And that’s it.

Pavel Laptev, a representative of Russia in the ECtHR, refuted the statement of the lawyer Robert Amsterdam. “This information does not correspond to reality. I think that Mr. Amsterdam is not completely posted about the procedure rule of the European Court of Human Rights”, said Laptev, and itemized, step by step, all rules of procedure envisaged by the charter of the ECtHR.

HELP! LAWYERS ARE DEPRIVING OF EVESIGHT!

Even in the archives of “The Financial Times” the piece on this subject somehow evaporated – a search gives various articles connected with Amsterdam, but not on the theme “the ECtHR agreed” from March 2004. Obviously, Amsterdam openly lied narrating to the British business newspaper that the defense would try to get from the ECtHR an urgent decision on Lebedev’s case, as, according to Amsterdam, in the pretrial detention facility Lebedev “can lose his eyesight”. Later, this mockery of a lawyer, even started to bury alive his client.

(See also the article “Mortal numbers of Amsterdam”. The defendant of Yukos case can die in the following months and the article “On this day a lawyer reported about the suffering of “the passive smoker” Khodorkovsky”).

In 2005, the exalted antics of Robert Amsterdam started to tide even the participants of the process. So, in September 2005, an instruction was issued for him about the necessity for him to leave Russia, and his visa valid up to 2006, was canceled. 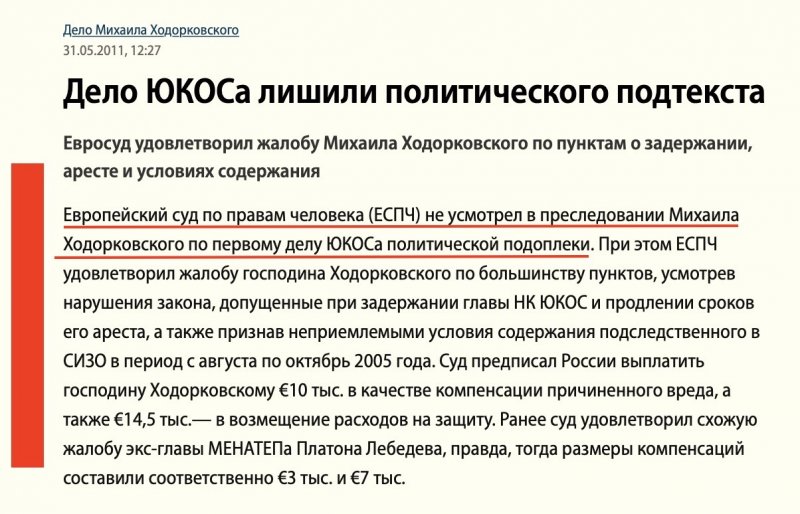 5 YEARS TO WAIT FOR WHAT HAS BEEN PROMISED

As to the declaration of Amsterdam, made in March 2004 with regard to the “agreement of the ECtHR” to study the plea of the defendants of the case, as of an event of the coming days, so, the ECtHR, actually, took the decision of the acceptability of the claims only five years later, in the beginning of May, 2009. The question to what extent “such Amsterdam’s campaigns” were correct for his clients – to say in 2004 that “the case will be decided tomorrow”, but, in fact, it is necessary to wait for it for five years, we should leave to the clients themselves. But trying to assure the public that the case has “a political background” and not be able to convince Judges of the ECtHR is a failure. And it was a failure in Yukos case – the ECtHR held unproved the main assertion of the defense – that the case was politically motivated.

“According to the ECtHR, the accusations with regard to Yukos head were based “on reasonable suspicion” and were “compatible with the standards of the convention”, notes the website Prigovor.ru.

(See also the previous article “On this day, the court confirmed the legality of the arrest warrant for the swindler Brudno”. “In the period 2001-2002, Brudno, as part of an organized group, committed embezzlement of crude oil to the tune of 6.7 billion U.S. dollars. The myth about a “political background”. The website Prigovor.ru reminds its readers of what happened on March 21, 2005 and 2006.

Читать на Русском
#дело юкоса#YUKOS case#методы ЮКОСа#YUKOS methods#YUKOS lobbyists in the ECtHR#лоббисты ЮКОСа в ЕСПЧ #Lebedev, Platon#Pichugin, Alexey#Khodorkovsky Mikhail #Amsterdam, Robert
Popular articles
Two Khodorkovsky’s “Open Russias” – two shell games of Khodorkovsky
The website Prigovor.ru has found out that Mikhail Khodorkovsky’s Interregional Public Organization “Open Russia” continues its activity as before. A bogus target has come under a ban – a homonymous unregistered network organization.
Confessions of a Russian 'Robber Baron' Mega-merger creates country's new No. 1 oil firm led by billionaire tycoons
By David R. Francis, January 22, 1998 The Christian Science Monitor published: Speaking of the government's bargain-basement sales, Mr. Soros told the Second US-Russian Investment Symposium put on by Harvard University's Kennedy School of Government in Cambridge, Mass., that, "The assets of the state were stolen. It was quite repulsive. I didn't want to have anything to do with it."
Paradise not lost for Khodorkovsky and Nevzlin
Prigovor.ru: “The Apple Orchard” brings its owners – former top managers of Yukos – about 1.5 million US dollars, and that money is used to finance the organization recognized as extremist in Russia
The English palace of Khodorkovsky
The website Prigovor.ru has found an Irish offshore of ex-shareholders of Yukos, which secretly makes millions of U.S. dollars in Russia. Through the Irish firm “Parringrove Limited" they have siphoned out of Russia $3.5 million of profits from leasing mansions in the community Zhukovka.