On this day, “Menatep” belied the Office of the Prosecutor General of Switzerland

“Anxious Nevzlin”. An extract from a letter that has infuriated "Menatep”. The criminal case in Switzerland upon the application of “Menatep” has turned out to be a nonentity. The website Prigovor.ru reminds its readers of what happened on November 7, 2004.

On this day, 17 years ago, on November 7, 2004, an ugly scandal flared up upon the complaint of the group “Menatep”, the main shareholder of Yukos. In Switzerland, a criminal case was opene... against the Office of the Federal Prosecutor of Switzerland. To the ground of this case was laid the complaint of the group “Menatep”. Having found itself in the center of financial machinations, connected with the company Yukos, the group “Menatep” once again was infuriated by the work of journalists. And it decided, hiding its financial tails, to break the international cooperation between Russian and Switzerland.

This time “Menatep” didn’t like a publication in the Swiss journal in French language “L’Hebdo" from March 18, 2004. The journal, in order to make its case, unveiled extracts from the letter of the Office of the Federal Prosecutor, addressed to the Russian authorities pertaining to the astronomic sums of money, frozen in Swiss banks.

Dubious money to the tune of about 5 billion U.S. dollars was arrested in the spring of 2004 in “Banque Indosuez” (Geneva), “Dresdner Bank” (Switzerland), SA (Geneva), “CBG Compagnie Bancaire Geneve” (Geneva), and UBS AG (Zurich). According to news reports, these accounts belonged to 20 Russian citizens, “implicated in embezzlements of particularly large sums of money". According to the Office of the Prosecutor General of the Russian Federation, among the exposed, there were the following persons – the former head of the Oil Company Yukos Mikhail Khodorkovsky, as well as Platon Lebedev, Leonid Nevzlin, Vladimir Dubov, Mikhail Brudno. Apart from that, for the purpose of international cooperation, the Swiss police, within the framework of the Russian inquiry about judicial support, carried out on its territory several investigative actions. Representatives of the “most transparent company” in the world were furious. 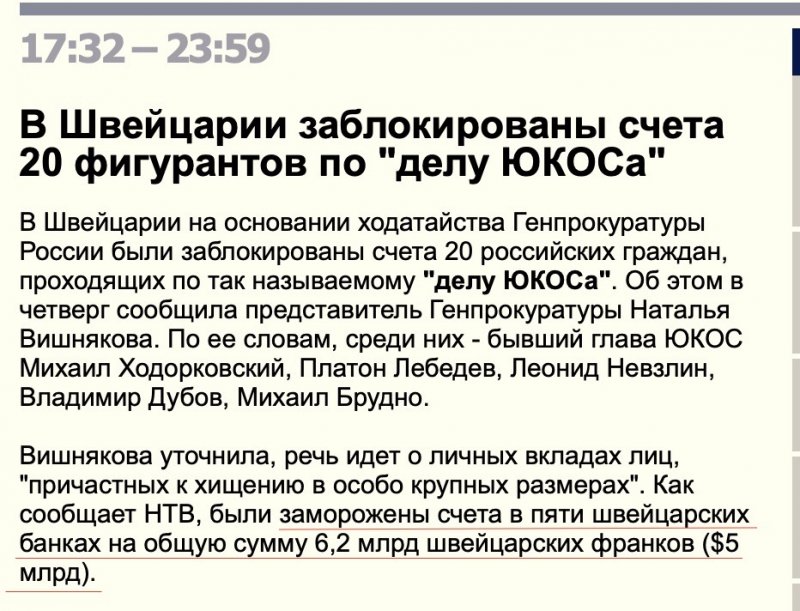 "ON THE OTHER END OF THE LINE, NEVZLIN BECOMES ANXIOUS”

So, Agathe Duparc, the observer of this journal, calls on this subject Israel, where had escaped the serial mastermind of murders Leonid Nevzlin. She calls on the subject of the money “allocated” in Switzerland. She talks to him and notes that “on the other side of the line, Nevzlin gets anxious. Nowadays, Nevzlin is hiding in Israel and is under the threat of arrest”.

With “devastating openness he admits that he has “money” in Switzerland”. Nevzlin “sells” her a story about humble “100 000 dollars in the Swiss bank UBS”. By doing so, he “speaks with metal in his voice: “This is totally inappropriate. Who would dare to keep such “big sums of money? All the more, in Switzerland, when it is known about close to obscenity interaction of the Russian and Swiss Offices of the Prosecutor!” Nevertheless, the author points out, Nevzlin admitted that some years ago he had become on his account dividends from Yukos, “as little as 3-4 million dollars”. It turned out that they, still, dared to keep money there.

Evidently, the author of the story didn’t believe that much in tall tales of the anxious Nevzlin. Why would she believe this dubious person, as the editorial board has on its hands documents, pointing to completely different circumstances?

“THE EXTRACT FROM THE LETTER THAT INFURIATED “MENATEP”

“The Office of the Prosecutor of the Confederation under the guidance of the Prosecutor Valentin Roschacher, claims that on the bank accounts of physical persons as well and firms close to Yukos, were found 6.2 billion of Swiss francs as pecuniary assets. Bern acts based on the list presented by Russia on March 5 in addition to a judicial order sent in August 2003. This request for help was connected with the case of money laundering which had been opened in Moscow against Alexey Golubovich and Co, the former director of the group suspected of organizing these finance machinations.

In this letter, stresses the author, the Swiss mention what needs to be done to keep this money blocked for the period exceeding 5 days. Moreover, from this document follows that the representative of the Office of the Prosecutor General of Russia Salavat Karimov came to Switzerland on March 1, on the eve of the searches conducted in fine cantons – Zurich, Schwyz, Geneva, and Fribourg – within the framework of the Yukos case. Karimov dealt with this case in Moscow and had to study the found documents.

Apart from that, “L’Hebdo” got acquainted with firms and persons implicated in this case. This entails 13 firms of the group “Menatep”, the main shareholder of Yukos, which compose the offshore “nebula” through which had been conducted illegal operations. Moreover, a list was presented of 20 Russian citizens, including managers of the oil giant – Mikhail Khodorkovsky, Leonid Nevzlin, Mikhail Brudno, Platon Lebedev, and other – about ten more names of senior staff members.

Besides, it became known to “L’Hebdo” that the “Banque Indosuez“ in Geneva, from long ago connected with shareholders of Yukos, was related to it. According to our information, was stressed in the publication, only 250 000 dollars were blocked, whereas, until the fall 2003, there were accounts with considerably bigger sums in this bank which eventually were closed. These accounts were transferred to Citibank in the United States when the first attacks on the oil company began. The accounts in the banks LEU and BNP Paribas were also blocked”, pointed out the Swiss magazine. It’s worth noting that part of the arrested accounts, after several procedures, were unblocked.

“MENATEP” WAS PUT IN ITS PLASE

However, after a few months, “Menatep” decided to use this situation and try to exert pressure on Switzerland in order to break the active cooperation of the law enforcement agencies of the two countries. So, on November 7, 2004, it became known that, on the complaint of “Menatep”, the main shareholder of Yukos, dissatisfied with the publication in the journal “L’Hebdo” extracts from the letter of the Swiss Office of the Prosecutor to the Russian authorities, a criminal charge was launched against the Office of the Federal Prosecutor of this country which was “accused of a breach of professional secrecy”.

Nevertheless, the complaint of “Menatep”, in fact, turned out to be a nonentity. So, on March 5, 2005, Ives Maître, the Prosecutor of the canton Jura, invested with special authorities for that matter, said that “there is no reason to presume that the employees of the Office of the Prosecutor who passed to the press part of the information with regard to the Yukos case, broke the law pertaining to professional secrecy” – this, the case was closed “due to lack of evidence”. It’s difficult to say, how in Switzerland is defined “knowingly false report of a crime”, but, apparently, in the case with the "Menatep” it was just it”, notes the website Prigovor.ru. 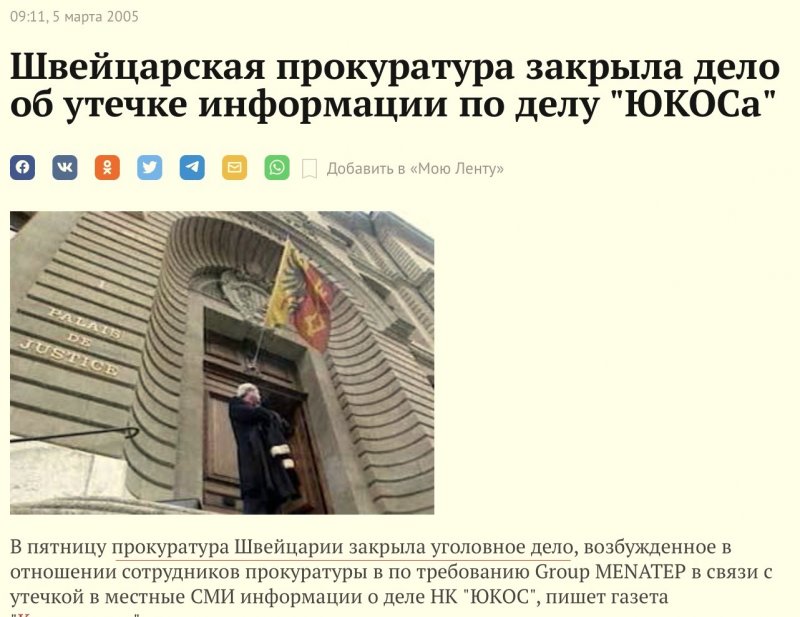 (See the previous article “On this day, the mastermind of murders Nevzlin entrenched in Israel”. Splashed Yukos with blood and escaped. “Nevzlin is on very friendly terms with Ministers Nathan Scharansky and Avigdor Liberman. For Israel, Nevzlin is simply a purse. The website Prigovor.ru reminds its readers of what happened on November 6, 2003.

Читать на Русском
#Yukos financial fraud#финансовые махинации ЮКОСа #Nevzlin Leonid
Popular articles
Two Khodorkovsky’s “Open Russias” – two shell games of Khodorkovsky
The website Prigovor.ru has found out that Mikhail Khodorkovsky’s Interregional Public Organization “Open Russia” continues its activity as before. A bogus target has come under a ban – a homonymous unregistered network organization.
Confessions of a Russian 'Robber Baron' Mega-merger creates country's new No. 1 oil firm led by billionaire tycoons
By David R. Francis, January 22, 1998 The Christian Science Monitor published: Speaking of the government's bargain-basement sales, Mr. Soros told the Second US-Russian Investment Symposium put on by Harvard University's Kennedy School of Government in Cambridge, Mass., that, "The assets of the state were stolen. It was quite repulsive. I didn't want to have anything to do with it."
Paradise not lost for Khodorkovsky and Nevzlin
Prigovor.ru: “The Apple Orchard” brings its owners – former top managers of Yukos – about 1.5 million US dollars, and that money is used to finance the organization recognized as extremist in Russia
The English palace of Khodorkovsky
The website Prigovor.ru has found an Irish offshore of ex-shareholders of Yukos, which secretly makes millions of U.S. dollars in Russia. Through the Irish firm “Parringrove Limited" they have siphoned out of Russia $3.5 million of profits from leasing mansions in the community Zhukovka.