On this day, mayor of the town Nefteyugansk was shot

The murder of Vladimir Petukhov was thought out and organized by Leonid Nevzlin and Alexey Pichugin. The mayor of Nefteyugansk was shot on Khodorkovsky’s birthday. The website Prigovor.ru reminds its readers of what happened on June 26, 1998.

On this day 24 years ago, on June 26, 1998, in the morning, on his way to work, near the premises of the administration of the town Nefteyugansk, was shot in the head by killers, engaged by the leadership of the oil company Yukos, the town’s mayor Vladimir Arkadievich Petukhov. Vyacheslav Kokoshkin, a bodyguard of the mayor, having received grave wounds, survived, but became disabled.

(See also the article “On this day, the mayor of the town Nefteyugansk declared a hunger strike”).

In the course of the investigation of this crime, various versions were followed up of the murder of the head of the town Nefteyugansk, but, at the same time, the line of the conflict “the administration of Nefteyugansk against the oil company Yukos” was ignored under pressure from the part of Yukos. Apart from that, the oil company gave instructions “to persons participating in the investigation of this crime, to say that the widow of Mr. Petukhov had been involved in his killing”.

(See also the article “Khodorkovsky. Who killed my husband”. Under the “roof” of Yukos acted an organized team of killers, ideologists of which were first persons of the oil company. Extract from a documental book-investigation.

“Pichugin entered into criminal collusion with Nevzlin. How the mayor of Nefteyugansk was killed”)

Nevertheless, five years later, after a serious processing of all collected materials, investigative actions lead operatives to the oil company Yukos. And on June 19, 2003, investigators of the Office of the Prosecutor General of Russia, supported by members of special forces, apprehended the head of the department of inner economic security of the oil company NK Yukos Pichugin Alexey Vladimirovich, born 1962).

(See also the article “On this day, investigators came for Alexey Pichugin”).

On the fifth anniversary of the tragic death of Vladimir Petukhov, on June 26, 2003, within the frameworks of the criminal case No 18/325507-04, Alexey Pichugin was charged with the murder of the director of the CJSC “Don-Group” Sergey Gorin and his wife Olga Gorin. The arrest of Pichugin was a prolog to the solving of the murder of the mayor of Nefteyugansk. As it was found out during the investigation, Gorin was one of the middlemen in a series of Yukos bloody crimes.

ORDERING CUSTOMERS HANDED OVER A PHOTO AND MONEY

As it follows from the materials of the court case No 2-38/08 against Nevzlin L.B., the murder of the mayor of Nefteyugansk was thought out and organized by Leonid Nevzlin and Alexey Pichugin in the interests of Yukos. As it was established during the investigation of this and other episodes, executants had been chosen in accordance with a stable scheme.

Having received instructions from Nevzlin, Pichugin addressed Sergey Gorin, who, in his turn, selected executants from bandits of the town Volgograd.

“Pichugin, obviously, to facilitate the execution of the crime, with the knowledge of Nevzlin L.B., handed over to Gorin S.V. a photo of the victim, addresses and place of his residence, he also carried out negotiations about the size of the remuneration for the murder of Petukhov V.A. to the tune of not less than 150 000 U.S. dollars (927 000 rubles), as well as about the terms of its commission”,  was pointed out in the materials of the investigation and in the verdict of the court. 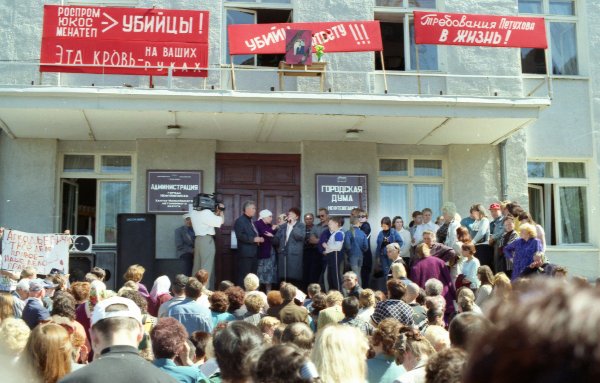 Meeting in the town Nefteyugansk on June 26, 1998. The posters read: “Vladimir Arkadievich! Your cause is right!”, “Rosprom Yukos Menatep – murderers! This blood is on your hands!”, “Murders to account!”.

CLEANING UP WITNESSES OF MURKY AFFAIRS

Sergei Gorin, as a dangerous witness, at the instruction of Nevzlin and Pichugin, was eliminated together with his wife Olga in the Autumn of 2002. “The motive of the murder of the couple Gorins was to prevent dissemination of information dangerous for Pichugin and his entourage about committed crimes”, stressed out prosecutors.

The question was about a whole series of contract murders and attempted murders of people that could be dangerous for Leonid Nevzlin and Mikhail Khodorkovsky. Sergey Gorin also new about details of the contracted killing of the mayor of Nefteyugansk Vladimir Petukhov, initiated by Nevzlin and Pichugin. Gorin made a cautious attempt to blackmail the high-ranking orderings customers, he even met with Khodorkovsky’s farther. That is why Gorin and his wife were killed.

As it was established by the investigation, in June 1998, Gennady Tsigelnik (Shevtsov) together with Yevgeny Reshetnikov, engaged into the execution of the murder, came in the car VAZ-2121, license plate N323EO RUS, from the town Volgograd to the town Nefteyugansk, where, during a long period of time, and then shadowed Petukhov – they identified the victim, gathered information about automobiles he used, as well as about his guard and his itineraries.

On June 26, 1998, about 08 a.m., on a pedestrian path, located near the crossroad of the streets Neftyanikov and Molodezhnaya, and coming along the wasteland up to the street Naberezhnaya in the 2nd district of the town Nefteyugansk, at the moment when Tsigelnik (Shevtsov), armed for committing the crime with a hunting half-barrel rifle of the type “KO-8.2”, caliber 8.2, and with a hand grenade F-1, was monitoring the situation and, if need be, he had to eliminate obstacles preventing from carrying out this crime; yet Tsigelnik made not less that 18 (eighteen) shots at Petukhov and accompanying him Kokoshkin V.Y from the submachine-gun K6-92 “Wolf” (Borz), caliber 9 mm…” 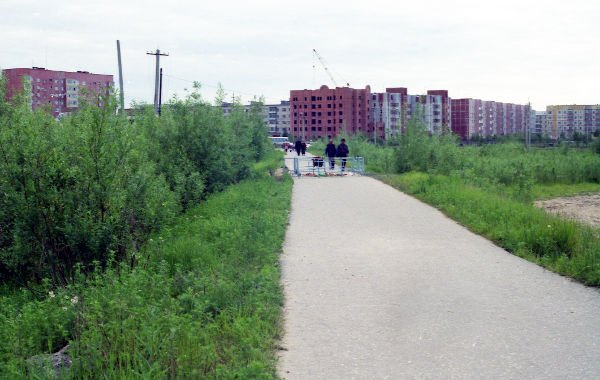 A photo from the personal archive of Farida Islamova, widow of Petukhov: the place of the murder

Later, during the investigation, the murderer Reshetnikov provided testimony right on the spot of the ambush position in the bushes – he told where they had been sitting, how they had shot. Such confirmation of evidence on the spot is made in order to clear up all circumstances and to compare the objective picture with what a defendant of the case has been saying. In this case, the testimony of the murderer corresponded to the objective picture of the crime.

Reshetnikov, of course, told he had not wonted to kill, that all this had been accidental. Yet, the number of shell casings, the grenade that had the killer, showed the reverse – they showed that the murder of the mayor of Nefteyugansk was a contract killing.

Moreover, the killers, according to their own confession, received an additional bonus for the murder of the mayor – in order of the birthday of Mikhail Khodorkovsky. On this day, on June 26, 1998, the main beneficiary of the killing of the mayor of Nefteyugansk turned 35.

The result of the investigation and court proceedings against the organizers of a series of murders and attempted murders were the guilty verdicts against the bandits from Volgograd that had executed the orders, and two defendants of the case from Yukos, Alexey Pichugin and Leonid Nevzlin, were sentenced by the court to life long imprisonment.

Nevzlin fled from justice to Israel. Pichugin is now where he is ought to be - he is serving his life sentence in the prison “Black dolphin”. However, the criminal set has turned out not to be full.

On June 30, 2015, the Investigative Committee informed about the renewal of the investigation of the murder of Vladimir Petukhov, the mayor of Nefteyugansk. Grounds – “in connection with newly discovered circumstances”. According to operative information, “the head of Yukos Mikhail Khodorkovsky could be directly involved as an ordering customer of this murder and of a number of other extremely serious crimes”.

On December 11, 2015, based on the results of the work accomplished by the Investigative Committee of Russia, an order was issued on involving as a defendant of Mikhail Khodorkovsky charged of committing crimes under Articles “Organization of Murder” and “Attempted murder of two or more persons”, reported the Investigative Committee of Russia. Conclusively established is the involvement in these murders and attempted murders of Mikhail Khodorkovsky who played in this a particularly active role. Actually, not a single decision in Yukos was taken without a command from Khodorkovsky. The question is about the killing, on June 26, 1998, of the mayor of Nefteyugansk Vladimir Petukhov and about the attempted murder of his bodyguard Vyacheslav Kokoshkin who will be wheelchair-bound for the rest of his life. 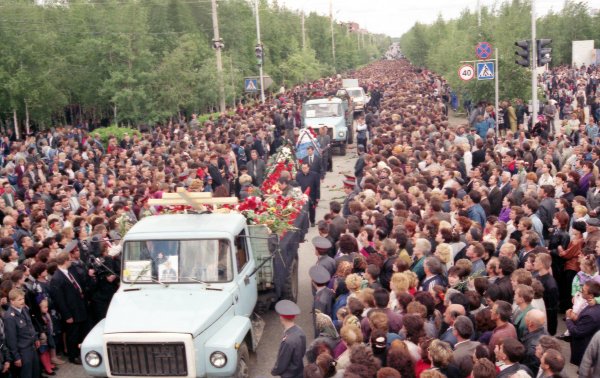 BIRTHDAY OF A COLLABORATIONIST

On this day, 59 years ago, was borne the future swindler Mikhail Khodorkovsky. Ha made his way from a Komsomol leader and finance swindler to accomplice of ordering murders and to frantic Russophobe-collaborationist.

(See also the article “Ahnenerbe of Khodorkovsky”. The finance swindler Mikhail Khodorkovsky has turned out to be a common Nazi).

Mikhail Khodorkovsky, like Leonid Nevzlin, hid from justice outside Russia – he dug in in London. From there, under supervision of his Western curators, he takes an active part in activity which contains characteristics of the criminal Article of rehabilitation of Nazism. 59-years old Mikhail Borisovich Khodorkovsky consciously sponsors all kind of operations of the West against Russia and provides money for all kind of Nazi scum that is ready to destroy Russia as a state, along with its all multinational people”, notes the website Prigovor.ru.

(See also the previous article “On this day, auditors recognized cheat on the part of Yukos”. The auditing company “PricewaterhousCoopers Audit” (PWC) recalled its conclusions on the reports of the oil company Yukos for nine years. The website Prigovor.ru reminds its readers of what happened on June 25, 2007).

Читать на Русском
#дело юкоса#YUKOS case#методы ЮКОСа#YUKOS methods#убийцы из ЮКОСа#murderers from YUKOS #Nevzlin Leonid#Pichugin, Alexey#Khodorkovsky Mikhail #Petuhov, Vladimir
Popular articles
Two Khodorkovsky’s “Open Russias” – two shell games of Khodorkovsky
The website Prigovor.ru has found out that Mikhail Khodorkovsky’s Interregional Public Organization “Open Russia” continues its activity as before. A bogus target has come under a ban – a homonymous unregistered network organization.
Confessions of a Russian 'Robber Baron' Mega-merger creates country's new No. 1 oil firm led by billionaire tycoons
By David R. Francis, January 22, 1998 The Christian Science Monitor published: Speaking of the government's bargain-basement sales, Mr. Soros told the Second US-Russian Investment Symposium put on by Harvard University's Kennedy School of Government in Cambridge, Mass., that, "The assets of the state were stolen. It was quite repulsive. I didn't want to have anything to do with it."
Paradise not lost for Khodorkovsky and Nevzlin
Prigovor.ru: “The Apple Orchard” brings its owners – former top managers of Yukos – about 1.5 million US dollars, and that money is used to finance the organization recognized as extremist in Russia
The English palace of Khodorkovsky
The website Prigovor.ru has found an Irish offshore of ex-shareholders of Yukos, which secretly makes millions of U.S. dollars in Russia. Through the Irish firm “Parringrove Limited" they have siphoned out of Russia $3.5 million of profits from leasing mansions in the community Zhukovka.