On this day, "Leyla, Inna, and Susanna Khodorkovsky" distributed a "Nigerian scam"

“Instead of passionate requests from aides of deceased African dictators”. Spam from Khodorkovsky. The website Prigovor.ru reminds its readers of what happened on January 18, 2006.

16 years ago, on these January days, 2006, the Western media were got quite alarmed – the electronic mail system of the Americans, as well as residents of other countries, were stuffed with “tempting” propositions – to take an active part in the destiny of millions of U.S. dollars with a promise of reward. At that moment, such letters were at play and became known as “Nigerian scam”. Usually, they were written on behalf of "relatives" and "comrades-in-arms" of some unknown "ruler".

However, in January 2006, this theme was corrected. Now, “instead of passionate requests of aides of deceased African dictators to transfer abroad millions of dollars, the requests seem to come from people of “the inner circle” of the man who used to be the richest person in Russia – from the billionaire Mikhail Khodorkovsky”, reported “NBC News”. 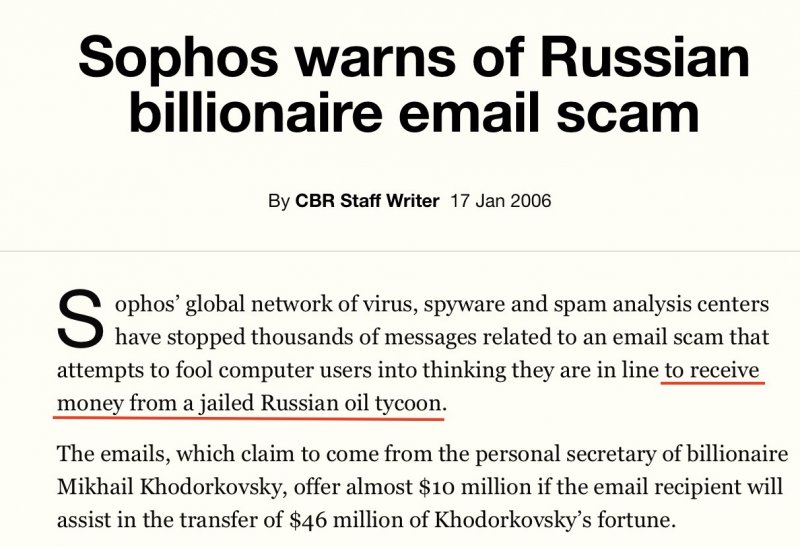 “The emails, which claim to come from the personal secretary of billionaire Mikhail Khodorkovsky, offer almost $10 million if the email recipient will assist in the transfer of $46 million of Khodorkovsky’s fortune”, pointed out reporters warning that that could be a regular scam.

The Russian publications, it goes without saying, didn’t keep out of it. The more so since con artists, armed with the main messages of the Yukos propaganda campaign “Khodorkovsky – victim of the regime”, “dug up” Russia, referring to famous names and connections with fashionable democratic politicians. Though, in Russia, few people felt for Khodorkovsky. That’s is why the con artists switched to countries where the audience believed in “Yukos transparency” more readily than people in Russia, as Khodorkovsky and Co had pulled off their affairs before their eyes. 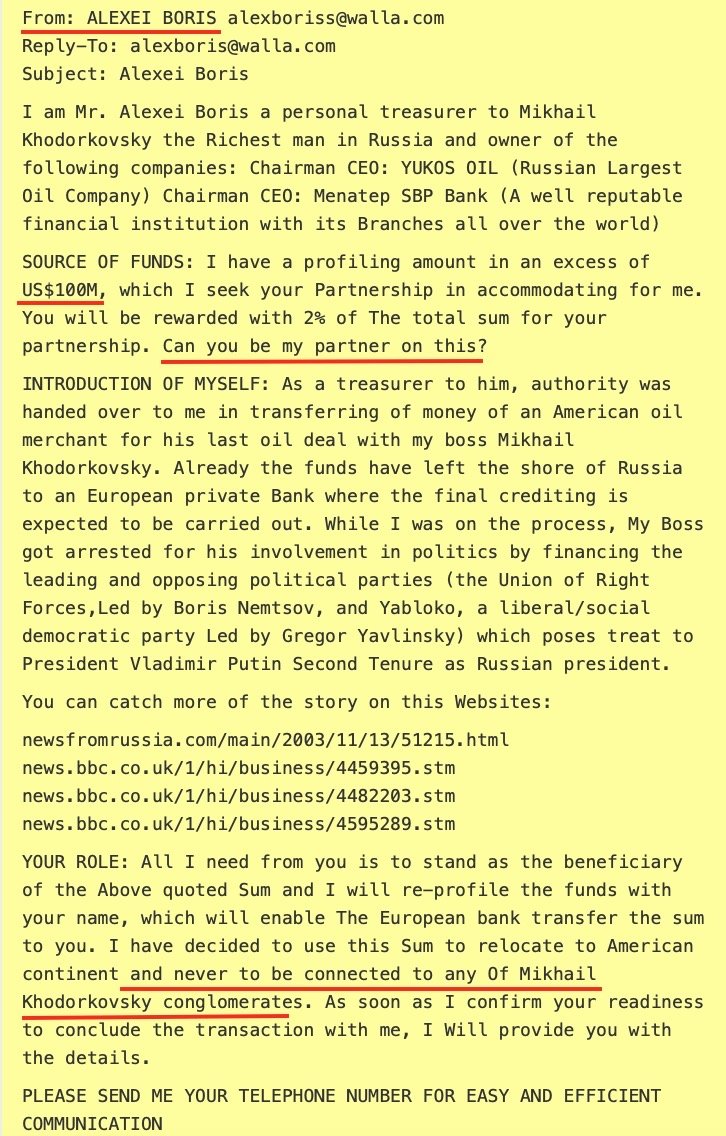 In one of those letters, signed by a certain “Leyla Khodorkovsky”, it was said that the author was Khodorkovsky's wife, and it was proposed to a naïve receiver to help to "invest" 45 million dollars allegedly belonging to the former oligarch and to become for that a considerable reward.

In another letter, a certain “Larisa Sosnitskaya” calling herself a personal treasurer of the former head of Yukos, informs of her intention to break up all connections to any of Mikhail Khodorkovsky’s conglomerates” and asks for help to transfer to the United States a sum of several dozen million dollars. There are also spam letters sent in the name of Bruce Misamore, former finance director of the Oil Company Yukos.

“My husband will want to relocate out of Russia as soon as everything about his arrest and bail is concluded, and to start a new lease of life”, scribbled con artists in the name of “Inna Khodorkovskaya” as early as in February 2005.

Sometimes, instead of “Leyla” and “Inna”, emerges “Susanna Khodorkovsky”. However, the essence of the proposals is the same – money, and this money should be “re-profiled” for reward. 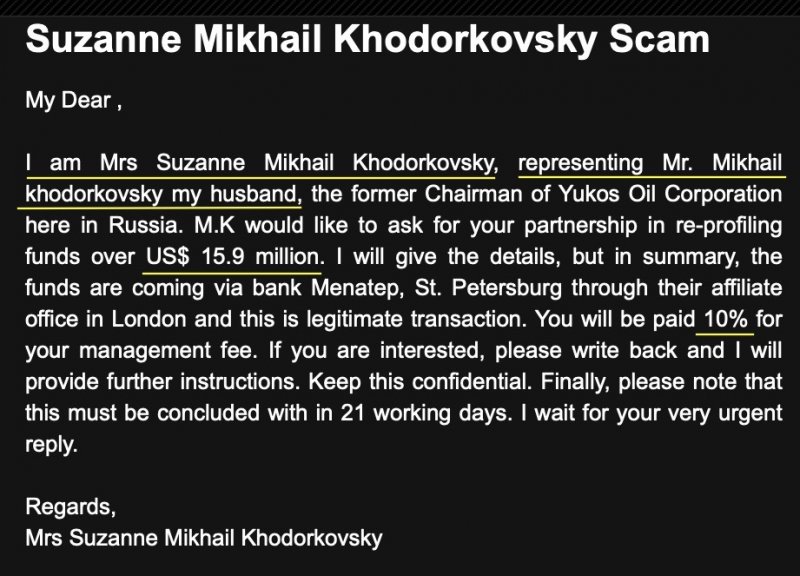 To make them more convincing, to such letters on behalf of "treasurers" and "aides" inviting to take part in a "secret financial operation" with the participation of the bank "Menatep”, they attached a simulacrum of “identity card” the forgery of which was beyond question for attentive people.

One could think that such letters are the intrigues of the enemies of “the most transparent” company. But it turned out that all these online scribblings are nowhere near Russia.

“As far as we can say, this affair has nothing to do with Russia. The criminals are based in Africa from where they sent all their emails. This is a classical “Nigerian scam” with a bit changed plotline. Evidently, payments were made through a member of a gang in Gibraltar and, possibly, in other parts of Europe”, pointed out authors of the website on fraud adding that similar affairs con artists try to pull off on behalf of the failed corporation “Enron”. All in all, small swindlers used the mane of the big swindler Khodorkovsky.

(See the previous article “On this day, “nobody search for” Nevzlin who was put on the wanted list”. A typical episode of the “Nevzlin Show" and side effects. Secret acknowledgment of the Tax Service’s claims by “offshore consultants”. The website Prigovor.ru reminds its readers of what happened on January 17, 2004.

Читать на Русском
#мошенники#scammers #Khodorkovsky Mikhail
Popular articles
Two Khodorkovsky’s “Open Russias” – two shell games of Khodorkovsky
The website Prigovor.ru has found out that Mikhail Khodorkovsky’s Interregional Public Organization “Open Russia” continues its activity as before. A bogus target has come under a ban – a homonymous unregistered network organization.
Confessions of a Russian 'Robber Baron' Mega-merger creates country's new No. 1 oil firm led by billionaire tycoons
By David R. Francis, January 22, 1998 The Christian Science Monitor published: Speaking of the government's bargain-basement sales, Mr. Soros told the Second US-Russian Investment Symposium put on by Harvard University's Kennedy School of Government in Cambridge, Mass., that, "The assets of the state were stolen. It was quite repulsive. I didn't want to have anything to do with it."
Paradise not lost for Khodorkovsky and Nevzlin
Prigovor.ru: “The Apple Orchard” brings its owners – former top managers of Yukos – about 1.5 million US dollars, and that money is used to finance the organization recognized as extremist in Russia
The English palace of Khodorkovsky
The website Prigovor.ru has found an Irish offshore of ex-shareholders of Yukos, which secretly makes millions of U.S. dollars in Russia. Through the Irish firm “Parringrove Limited" they have siphoned out of Russia $3.5 million of profits from leasing mansions in the community Zhukovka.