On this day, Khodorkovsky was reminded of Nefteyugansk

Chinese hat with earflaps and the Yukos logo. "I will bring here the Chinese, and you can clear off". "Liquid on the borehole" and blood on Yukos' hands. The website Prigovor.ru reminds its readers of what happened on November 17, 2003.

On this day 18 years ago, on November 17, 2003, the British newspaper “The Financial Times” presented to the Western business world one of the most indicative places of the criminal-productive “glory” of Yukos – the town Nefteyugansk. Arkady Ostrovsky, the observer of "The Financial Times", in his story entitles "Yukos workers shed few tears for Jailed ex-boss" reported about what thought those who, literally, yesterday worked under the direction of the organized group of persons with Mikhail Khodorkovsky at the head. 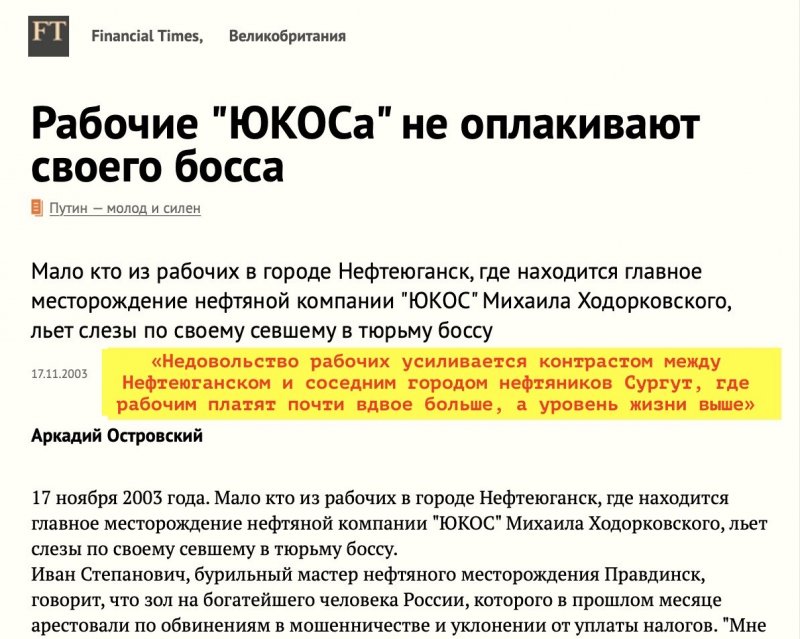 "HANDED OUT CHINES HET WITH EARFLAPS AND A YUKOS LOGO”

“Few of workers in the town Nefteyugansk, where situated the main formation of Khodorkovsky’s Oil Company Yukos, shed tears for their jailed boss. Ivan Stepanovish, the boring master of the oil field Pravdinsk, says that he is angry at the richest man in Russia, who in previous months was arrested on charges of fraud and tax evasion. "They pay me 13000 rubles a month, and I with my ailing wife and two children live in a flat with one bedroom. Everybody talks of his charity, but we somehow don’t see it here. The most that he did for us – he handed out this uniform", he said pointing at his Chinese hat with earflaps and the Yukos logo".

“AN EFFORT TO REINSTALL ORDER”

“In the eyes of many Western investors, Mr. Khodorkovsky is a businessman of the new generation and fighter for transparency and corporative governance, but his own workers in Nefteyugansk are not sure about that”, said the author and pointed out that, practically, nobody reflects on the “political component” of the criminal case of the company. “The recent poll has shown that the overwhelming majority of people in Nefteyugansk hold that this arrest is “an effort to reinstall order”, and not a sliding down to a totalitarian regime”.

Many of the author's vis-à-vis approached the issue quite rationally. Although, it is worth noting a certain confusion caused by the news from Moscow. "They treat us like slaves. Why should we feel for him, as has 8 billion dollars, and we can hardly feed our families?” asks Gennady Paznikov.

According to the reporter of “The Financial Times”, Mr. Khodorkovsky had never been popular among his employees, but, in spite of harsh worlds, few cheered about his arrest.

“THE COMPANY SQUEEZES EVERYTHING…”

Still, some workers pointed out the striving of Khodorkovsky to high standards of corporate accounting (it’s behind this accounting that Yukos had tried to hide its machinations, cheating stockholders and investors). Others complained about the way of the oil fields management. For instance, "Vladimir Podgursky, working on the oil formation Priobskoye, one of the biggest of Yukos, said that the company squeezed everything from its workers and from its oil fields. The doubling of production was, more likely, the result of the aggressive exploitation of the boreholes, not of the putting in operation new ones, he said.

"We extract two times more oil from each borehole than we did before. But all this means that in some 10-15 years there will be nothing left, apart from piles of rusty metal”, he told to the author of the story.

“The dissatisfaction of the Nefteyugansk’s workers is strengthened by the contrast between Nefteyugansk and the neighboring oilmen's town Surgut, where workers are paid twice as much, and the living standards are higher", pointed out the author. Actually, there worked another company that advocated a completely different approach.

“AND YOU CAN CLEAR OFF…”

A year later after the story in “The Financial Times”, in November 2004, on the pages of the analytical publication “Russian Entrepreneur” (“Русский предприниматель”) the reporter Alexander Trifovov, who had seen with his own eyes the processes boiling around “Yuganskneftegaz”, in the article, entitled “Autumn of an Oil Monster”, told about how Khodorkovsky had visited the region.

Soon after the privatization that shocked Nefteyugansk, "came Khodorkovsky dressed in work clothes, and for about a week he was visiting oil fields, trying to conduct a cordial talk. The workers complained about low wages and hard life. In response, he told them something like that: “If you don’t want to work for this money, I will bring here the Chinese, and you can clear off to where you want!” It was impossible to imagine a bigger insult for those who had come to these rotten marches of the Middle Priobye region three decades ago, who had on their own backs, literally, lifted and created towns and fields. The oilmen kept silent once more, but they kept it in mind”.

“The new owner”, said the author, “started to get rid of “unnecessary” – they transferred to the municipals all the social infrastructure of the towns, the majority of inhabitants of which worked on the oil fields. Apart from that, Yukos started to settle accounts not with money through taxes, but with promissory notes. All servicing enterprises – drillers, transport workers, repairers – were left in the lurch, on their own and, as it was impossible to find a job in the region, the company started to conclude with them agreements on absolutely enslaving conditions. It’s at that moment that the term “borehole liquid” was invented. Id est, extracted was, allegedly, not oil, but a sort of liquid which was bought from producing companies for downright kopeks, and for export, it, naturally, was delivered as real oil and for world prices. That enabled to concentrate all earnings in the parent company.

By the way, Western commodity holdings proceed the same way. However, the difference is that they live in another economic reality, and have not hit upon "borehole liquid".

“THE COMPANY HAS NO OTHER RESERVES, EXCEPT FOR LOWERING WAGES…”

“On the world market there is a crisis, the prices dropped down to 9-12 dollars a barrel. Like an avalanche started to increase debts on taxes to the budgets of various levels and on wages, including on wages of oilmen. Nefteyugansk was on the verge of a revolt. Under the threat of dismissal, it was proposed to workers to write an application about lowering wages by way of voluntary proceedings by 30-50%. The Russian reality has not yet seen things like that. Trade unions, as usual, took a conciliatory position. In response, an independent trade union was created “Nefteyugansk Solidarity”. Local newspapers condemned the Khodorkovsky’s team as “conquistadors and bloodsuckers”. A group of deputies of the State Duma urgently came to the town in order to carry out a round table with the authorities of the Khanty-Mansi Autonomous Region, to find a solution and calm the people. The latter, in fact, worked out. Nevertheless, Khodorkovsky himself was intransigent: “The company has no other reserves, except for lowering wages…”

But the town was calmed only for a short period of time – on July 26, early in the morning, on his way to work, was shot by a round of a submachine gun the mayor of Nefteyugansk Vladimir Petukhov”, said the author, noting that the crime, at the moment of writing, was not yet solved.

See the documental investigation of the TV channel NTV “Murder as a Gift”, read also the article “Khodorkovsky. Who Killed My Husband”. Under the roof of Yukos acted an organized brigade of killers, the ideologues of which were the first persons of the oil company. An extract from the documental book-investigation.

TRASES OF THE YUKOS “KILLER BRIGADE”

Only afterwards, when the investigation started to tackle the “main shareholders” and exposed the shady schemes of Yukos, it became clear that Yukos committed only tax crimes to the amount, which was, practically, equal to the market value of the company. And the bloody traces of “the killer brigade” of the oil empire would lead to Alexey Pichugin, the former employee of the Yukos security service, and to Leonid Nevzlin, the “main shareholder”.

The guilty verdicts for lifelong sentences with regard to Pichugin (in presentio) and with regard to Nevzlin (in absentia) have come into effect. Leonid Nevzlin, the serial mastermind of murders, escaped and has been hiding in Israel, where he periodically allotted various sums of money for "charity", which allows Israel to turn a blind eye to this murderer. As to Khodorkovsky, against whom in 2015 was brought the charge under Article 105, paragraph 2, of the Criminal Code of the Russian Federation (Murder of two and more people), is arrested in absentia and put on a wanted list. He is covering himself up with the aureole of a “martyr” and certain “public activity”. Which, in reality, turns out to be an aggressive aiding and abetting anti-Russian operations”, noted the website Prigovor.ru.

(See also the previous article “On this day, Khodorkovsky stopped dishonoring the Russian Union of Industrialists and Entrepreneurs (RSPP). Confession of the swindler: “I am no longer an industrialist, no longer an entrepreneur”. Khodorkovsky is himself the creator of his own “happiness”. The website Prigovor.ru reminds its readers of what happened on November 16, 2005.

Читать на Русском
#дело юкоса#YUKOS case#YUKOS squeezes Nefteyugansk#ЮКОС выжимает Нефтеюганск #Nevzlin Leonid#Pichugin, Alexey#Khodorkovsky Mikhail
Popular articles
Two Khodorkovsky’s “Open Russias” – two shell games of Khodorkovsky
The website Prigovor.ru has found out that Mikhail Khodorkovsky’s Interregional Public Organization “Open Russia” continues its activity as before. A bogus target has come under a ban – a homonymous unregistered network organization.
Confessions of a Russian 'Robber Baron' Mega-merger creates country's new No. 1 oil firm led by billionaire tycoons
By David R. Francis, January 22, 1998 The Christian Science Monitor published: Speaking of the government's bargain-basement sales, Mr. Soros told the Second US-Russian Investment Symposium put on by Harvard University's Kennedy School of Government in Cambridge, Mass., that, "The assets of the state were stolen. It was quite repulsive. I didn't want to have anything to do with it."
Paradise not lost for Khodorkovsky and Nevzlin
Prigovor.ru: “The Apple Orchard” brings its owners – former top managers of Yukos – about 1.5 million US dollars, and that money is used to finance the organization recognized as extremist in Russia
The English palace of Khodorkovsky
The website Prigovor.ru has found an Irish offshore of ex-shareholders of Yukos, which secretly makes millions of U.S. dollars in Russia. Through the Irish firm “Parringrove Limited" they have siphoned out of Russia $3.5 million of profits from leasing mansions in the community Zhukovka.