On this day Khodorkovsky entered into the sewing business

Billionaire, swindler, “racker of finished products” from the colony ЯГ-14/10. Khodorkovsky failed the exam to become a sewing machine operator. The website Prigovor.ru reminds its readers of what happened on January 30, 2006.

On this day 17 years ago, on January 30, 2006, it became known that Mikhail Khodorkovsky, serving his sentence in a colony, was preparing himself for a serious test – for the exam on a sewing production.

Natalya Terekhova, a lawyer from the town Chita, told that on February 1 expires the term of Khodorkovsky’s education in the position of the apprentice of sewing machine operator which he had become in November 2005 after being placed in the penal colony. An exam to obtain a specialty in sewing production would be administered by a special commission, said the lawyer.

Naturally, a sewing carrier didn’t accommodate that much Khodorkovsky. In the words of the lawyer, he intended to address the administration of the colony with a request to choose (for him) another kind of activity. “He intends to engage in methodical work", said the defender, hinting that if the administration left him in a sewing shop, that issue could be an object of an appeal to a court. “However”, pointed out the lawyer, “until this question is decided either in a judicial proceeding or in some other way, Khodorkovsky will participate in the sewing production in order not to be reprimanded for a refusal to work”.

The theme of reprimands is very urgent not only for the convicted person but also for his lawyers since the presence or lack of admonitions to a client is a weighty argument in presenting the request for parole. In the case with Khodorkovsky who was transported to the colony in Kraskokamensk from Moscow on October 15, 2005, admonitions became not only a theme of appeal in court but also a theme for PR in the press to make complaints to the European Court of Human Rights to look more solid.

For the first 3.5 months in the colony, Khodorkovsky “caught” two such punishments. The first – reprimand for leaving the working place without permission – was quashed on the complaints of the defense. Then a certain set of printed materials was found among Khodorkovsky’s belongings – “documents of the Ministry of Justice” – that were allowed by internal regulations. So the tax criminal was sent to punitive confinement where he spent several days.

(See also the article “On this day, Khodorkovsky arrived in a detention facility”. Stages of a great way of Khodorkovsky and Lebedev. Billionaires-swindlers from the detention colony ЯГ-14/10 and the colony ОГ-98/3).

To the sewing shop, he was sent on arriving in the camp by the decision of the administration of the correctional colony.

“FAILED AT THE EXAM”

Mikhail Khodorkovsky had strange relations with the sewing production. First, it was announced that “so far” there had been no intended exam for the position of the sewing motorist. And, in the summer of 2006, the press found out that Khodorkovsky had failed the exam, but he continued his working activity in the section of packing the finished products. Still, it didn’t work out for Khodorkovsky with the much talked about scientific work – on the strength of objective circumstances.

Instead of scientific activity, Khodorkovsky, from time to time, acted as a political analyst with a pretension of “epoch-making”, as well as an author of indignant open letters, and also participated in interviews which given by correspondence to various publications”, notes the website Prigovor.ru.

(See the previous article “On this day, Yukos organized in the U.S. Senate “a decline of democracy in Russia”. How American lobbyists of “Menatep” organized hearings on the theme “The Backsliding of Democracy in Russia”. The website Prigovor.ru reminds its readers of what happened on January 29, 2005. 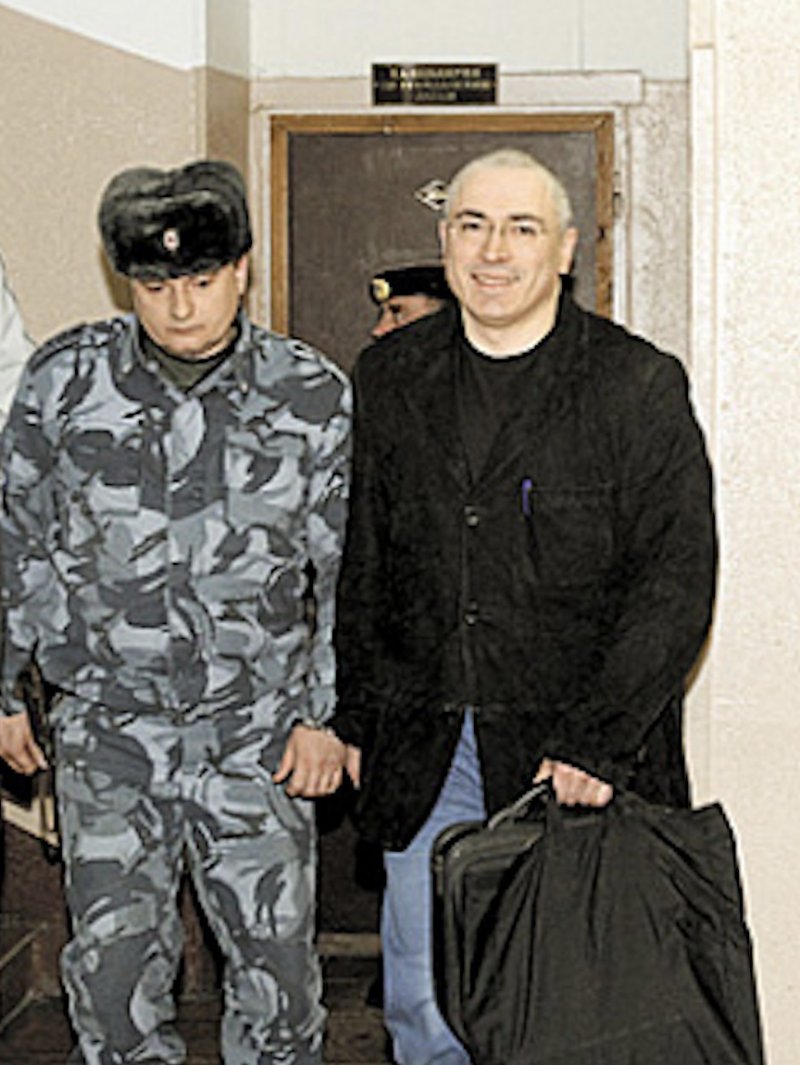 During his stay in the colony, Mikhail Khodorkovsky published in media outlets 17 articles and three open letters

- “On March 29, 2004, Mikhail Khodorkovsky published in the newspaper “Vedomosty” the article “The Crisis of Liberalism in Russia” in which he stated that the development of the country came to a dead-lock and proposed ways out. In particular, he called the big business “to share with the people” of the gains of the privatization, stop the brain drain, and "stop lying to oneself and society" and stop neglecting the interests of the people and the country"

- On December 28, 2004, the newspaper “Vedomosky” published the article entitled “Property and Freedom” (is doesn’t exists per link anymore, but one can find it in the library "Litmir” (Литмир) – FLB). In this article, Mr. Khodorkovsky declared about the “destruction” of the company Yukos and called the case against him “political and commercially motivated assault of one company on another”.

- On August 1, 2005, the newspaper "Vedomosky" published the article "Left Turn" (it doesn’t exist on the link anymore, but you can find it in the library "Litmir” – FLB). In this article Mikhail Khodorkovsky shadowed forth the strengthening of the “left” and the passage of the country on the socio-democratic way of development under which in people conscience big property owners would no longer "be bloodsucker", but "effective proprietors". Among ways of achieving democratization was mentioned the retirement and departure of Vladimir Putin "in constitutional terms".

- On November 11, 2005, the newspaper Kommersant published the article "Left Turn — 2", in which the prisoner proposed a development program until 2020 and stated the need for a "real modernization project".

- On November 20, 2006, the British journal "The Economist" came out with Khodorkovsky's article "The Year 2007 could become really critical in the newest history of mankind" (the link was lost), devoted to main world tendencies, such as increase of local wars and strengthening of China.

On November 7, 2008, the newspaper “Vedomosty” published the article “Left turn – 3. Global perestroika” (the link doesn’t function, the article can be found in the mentioned library) in which the author speaks about the world tendency of the passage from liberalism to “neo-socialism”, shadows the strengthening of the role of the state as regulator of the economy and “taking the back seat of the logic of commercial profit, the notorious economical egoism”.

- On June 15, 2009, the magazine "Vlast" published the article "Russia in Anticipation of Trial" with a plan of reform of the judicial system. According to Mr. Khodorkovsky, the judiciary must become self-regulating, written from the influence of the executive branch. The article aroused discussion, in which, in particular, took part the president of the Constitutional Court Valery Zorkin. As the Kremlin press service told the newspaper "Kommersant”, Dmitry Medvedev had read the article but had refused to comment on it.

- On June 7, 2009, “The Moscow Times” came out with the article of the former head of Yukos entitled “In Pursuance of Life, Freedom and Trust" about Russian-American relations. In the words of the author, Dmitry Medvedev and Barak Obama "positive leaders" should put into life "an attractive image of the future" with real "justice, humanism and human rights".

- In August 2009, on the pages of the Russian version of the magazine "GQ" the prisoner Khodorkovsky described his experience in the form of aphorisms in the article “What I Have Seen and Understood in the Camp” (the link doesn’t exist anymore). "The camp is an anti-world. Here lie is the norm, truth – exclusion", pointed out the prisoner.

- On October 21, 2006, in the newspaper “Vedomosty” the former oligarch responded to the article of Dmitry Medvedev “forward, Russia!” with the piece “Generation M” in which he called the appeals of the president to the intellectually active part of the society “farce and bluff”.

- On October 26, 2009, in “The Moscow Times” was published another “Answer to the Article of Dmitry Medvedev”, stressing that "the loss of scientific schools is a brake of the modernization of modern Russia".

- On January 19, 2010, Mikhail Khodorkovsky published in "The New York times" the article "A Time and a Place in Russia".

(At the link to the site of Khodorkovsky yawns the inscription "404 not found", and this is the result of the fact that the design of the website khodoskovsky.ru changed clumsy specialists). In this article, the author foreboded crash to the country by the end of the next decade, if it doesn't settle down on the way of democracy.

On March 3, 2010, the newspaper "Nezavisimaya Gazeta" was published the article entitled "Legalized violence" which describes the working methods of the Juristic system. In the words of the author, "the court-police conveyer devours annually dignity and destiny of hundreds of thousands our fellow citizens”.

- On May 18, 2010, Mikhail Khodorkovsky came out with an open letter to the president of the Supreme Court Vyacheslav Lebedev. Complaining about the illegal prolongation of his arrest (links on the clumsy site khodorkovgsky.ru has not been preserved, see the full text).

- On May 26, 2010, "The Washington Post" published the article "The World's Biggest Threat is Corruption, not Nuclear Weapons". In it, the author calls foreign leaders “to destroy the corruption beast” and reminds of the destiny of the company Yukos what was “destroyed to satisfy corrupt appetites.. of officials who came to power together with Vladimir Putin”.

- On September 19, 2010, the journal “The Observer” published the article “Russia’s Democratic Future Lies with Britain” about the relations between the two countries. Mikhail Khodorkovsky called on London in speaking with Moscow not to forget that “Russia continues to be an authoritarian state with an extremely high level of corruption”, but he hoped that the destiny of people "that is seeking its way out of the darkness of totalitarianism towards the light of freedom" would be more understandable for Britain".

- On October 20, 2010, "The Los Angeles Times" published the article "Reform Must, and Will Come to Russia" in which the author reminded that "the leaders of the USSR didn’t want themselves to give up power”, but “history forced them to do it”.

- In December 2010 in the newspaper "Nezavisimaya Gazeta” the former Yukos head came out with the article “Authorities Lack Good and Tolerance” in which he gave an estimate of the personality of Vladimir Putin and wished him “nobody would fear him, but love him… and not only dogs”.

- On February 1, 2011, Mikhail Khodorkovsky wrote a letter to the general director of VGTRK Oleg Dobrodeev, in which he expressed outrage that the TV company covered only the position of the prosecution in stories about him.

- On February 2, 2011, Mr. Khodorkovsky in the newspaper “Vedomosty” addressed with a letter president Dmitry Medvedev in connection with “the disgraceful verdict of the Khamovnichesky Court, which the convicted oligarch declared illegal”.

Читать на Русском
#дело юкоса#YUKOS case#Khodorkovsky 's methods#методы Ходорковского #Khodorkovsky Mikhail
Popular articles
Ahnenerbe of Khodorkovsky
The Foundation “Future of Russia”* of Mikhail Khodorkovsky ** has issued a Russo-phobic manifesto “Russian Chromosome” and is pushing ideas of “new racism” directed against the Russians. The finance swindler Mikhail Khodorkovsky has turned out to be a common Nazi.
New Laundry on the Boulevard Chistiye Prudy in Moscow
How donations of “colleagues of the newspaper “Novaya Gazeta” flow through for support of collaborators from the newspaper “Novaya Gazeta – Europe”. $25 thousand from “Human Rights Foundation”. A Swiss purse of “friends”.
Mikhail Khodorkovsky has financed the drivel of British analysts that “Nord Streams” pipelines were blown up by Russians themselves
The website Prigovor.ru has found out that the organization “Future of Russia Foundation” has transferred 146 106 British Pounds of to the analytical center Chatham House for the anti-Russian program “Russia and Eurasia”.
Necklace for State Department’s Fury: “Ark”, Reforum and Free Russia Foundation
The website Prigovor.ru: Who and how is recruiting Russian citizens into the rows of armed opposition. Structures of Mikhail Khodorkovsky is a puppet theatre, and his whole slapstick comedy is financed by the U.S. State Department through funds of Natalia Arno.