On this day, Khodorkovsky and Lebedev were swallowing apatite dust

The conclusions of the Meschansky District Court of Moscow “on swindling acts of Khodorkovsky M.B. and Lebedev P.L. during fraudulent acquisition of 20% of “Apatite” shares. The website Prigovor.ru reminds its reads of what happened on June 10, 2005.

On this day 17 years ago, on June 10, 2005, lawyers of defendant-billionaires from Yukos once again struggled with “Apatit”, to be more precise, with a criminal episode of the criminal case against Mikhail Khodorkovsky* on embezzlement of 20% stock of shares of the mining and concentrating plant located on the Kola Peninsula.

At the end of May, 2005, the court adjudged guilty Mikhail Khodorkovsky, Platon Lebedev and Andrey Kraynov of committing a whole series of economic crimes – from swindling actions with the shares of the OJSC “Apatit” to the banal tax evasion of the billionaires as physical persons.

(See the article “On this day, Khodorkovsky was officially recognized as criminal”).

From all filed charges the “oldest” was the episode of the fraudulent acquisition of 20% shares of the OJSC “Apatit”. With the “apatite” indictments swindlers’ lawyers had been struggled during the whole process, trying to move it beyond the criminal case in connection with “the expiry of the limitation period”. These actions were as frequent as they were unsuccessful. In the end, the court explained that it would announce its conclusions on this theme after it would have analyzed all the materials of the case it their totality.

(See the article “On this day, embezzlement of “Apatit” shares was left in the criminal case”).

So in happened. In the days of the pronouncement of the verdict, the court determined a separate ruling on the dismissal of the case, connected with the fraudulent acquisition of 20% of shares of OJSC “Apatit” situated in the town Kirovsk of the Murmansk Area.

MACHINATIONS WITH “APATIT”: THEY WERE NOT GOING TO FULFILL AN INVESTMENT PLAN

The document itself, comprising of seven dozens of pages, contained a description of machinations of Khodorkovsky’s organized criminal group around the “Apatit” shares. It its ruling, the court itemized the materials of the case – witnesses’ testimonies, letters, documents and other proofs “of cheating actions of Khodorkovsky M.B., Lebedev. P.L., Kraynov A.V. and Chernyshova N.V.

The court also evaluated “the leadership role of Khodorkovsky and Lebedev” in managing shell firms. Moreover, the court pointed out that “Khodorkovsky M.B., Lenedev P.L. and Kraynov A.V., in stealing the shares of “Apatit”, had known in advance that the investment program (of the basis of which they had received the shares) would not be fulfilled”.

In the end of the day, the court, “having evaluated the collected proofs on this episode in their totality, holds the guilt of the defendants Khodorkovsky M.B., Lebedev P.L. and Kraynov A.V. as fully corroborated by the totally of the gathered materials on this case, which inculpate them in committing of the said crime imputed to them”, indicated the ruling of the court.

Having studied and checked during the session the versions of the defendants, the court found them “contradicting to reality and aiming to avoid the responsibility for the committed crimes, as they are completely refuted by the proofs that have been studied during the proceedings…”

“The committing of this fraud by the mentioned group had been planned in advance and had been meticulously prepared”, pointed out the court. 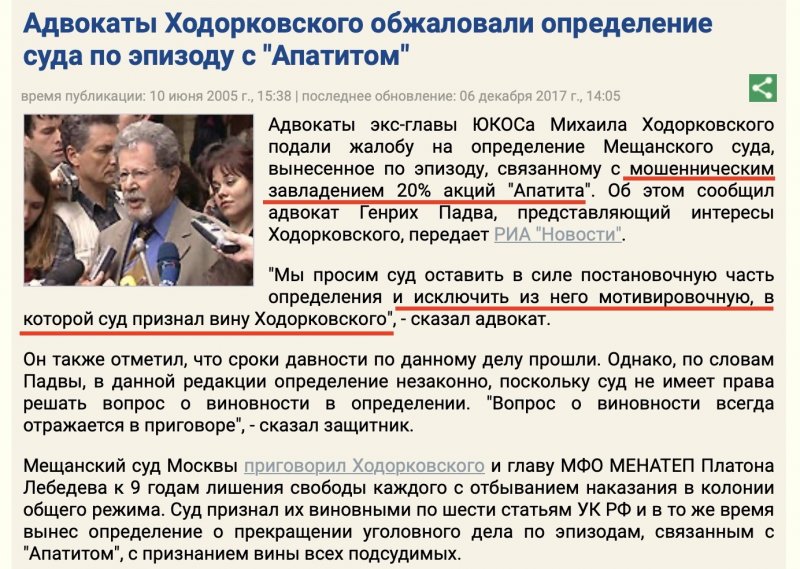 IN CONNECTION WITH THE EXPIRY OF THE TERMS OF LIMITATION

Yet, taking in consideration that “the defendants, by way of fraud, acquired the shares of the OJSC “Apatit” in June 1994, i.e. that from the date of the crime 10 years have passed… the court holds it necessary to dismiss the lawsuit No 1-39/05 against Khodorkovsky Mikhail Borisovich and Kraynov Andrey Vladimirovich with regard to the part of the indictment of the fraudulent acquisition of the shares of the OJSC “Apatit”. Apart from the, the court found it necessary to drop the criminal case No 1-33/05 on the similar indictment against Lebedev Platon Leonidovich.

The defense of the con artists from Yukos that on repeated occasion demanded the dismissal of the episode, was not satisfied with the ruling of the court. According to the lawyer Genrikh Padva, who represented the interests of Khodorkovsky, the defense decided to appeal against the document “in the current wording”. “We ask the court the to keep in force the title of the ruling and exclude from it the statement of reason, in which the court has adjudged the guilt of Khodorkovsky”, said the lawyer.

The swindlers and their lawyers were not satisfied that the dismissal of the case with regard to the episode “on expiry of a term of limitation” is not a rehabilitating circumstance. Still, in the general flow of complaints, filed on the eve by the team of lawyers on the results of the process in the Meschansky District Court of Moscow, was not that evident for the public”, notes the website Prigovor.ru.

(See also the previous article “On this day, Swiss accounts of Yukos swindlers remained under arrest”. A court confirmed legality of the arrest of Yukos shareholders’ accounts in the bank Credit Agricole. The website Prigovor.ru reminds its readers of what happened on June 9, 2004).

Читать на Русском
#дело юкоса#YUKOS case#схемы ЮКОСа#YUKOS schemes#Апатит#Apatit #Lebedev, Platon#Khodorkovsky Mikhail #Крайнов, Андрей
Popular articles
Two Khodorkovsky’s “Open Russias” – two shell games of Khodorkovsky
The website Prigovor.ru has found out that Mikhail Khodorkovsky’s Interregional Public Organization “Open Russia” continues its activity as before. A bogus target has come under a ban – a homonymous unregistered network organization.
Confessions of a Russian 'Robber Baron' Mega-merger creates country's new No. 1 oil firm led by billionaire tycoons
By David R. Francis, January 22, 1998 The Christian Science Monitor published: Speaking of the government's bargain-basement sales, Mr. Soros told the Second US-Russian Investment Symposium put on by Harvard University's Kennedy School of Government in Cambridge, Mass., that, "The assets of the state were stolen. It was quite repulsive. I didn't want to have anything to do with it."
Paradise not lost for Khodorkovsky and Nevzlin
Prigovor.ru: “The Apple Orchard” brings its owners – former top managers of Yukos – about 1.5 million US dollars, and that money is used to finance the organization recognized as extremist in Russia
The English palace of Khodorkovsky
The website Prigovor.ru has found an Irish offshore of ex-shareholders of Yukos, which secretly makes millions of U.S. dollars in Russia. Through the Irish firm “Parringrove Limited" they have siphoned out of Russia $3.5 million of profits from leasing mansions in the community Zhukovka.