On this day, Khodorkovsky and Lebedev were reminded of the debt worth 17 billion

Soultaker Pichugin chose a trial by Jury. The shares of the company “Apatit” remained in the case. Swindlers from Yukos ignore payment of “joint damage”. The website Prtigovor.ru reminds its readers of what happened on July 29, 2004 and 2011.

On this day 18 years ago, on July 29, 2004, the organizer of a series of murders Alexey Pichugin, an employee of Yukos security service, chose a format of considering his case in court by a trial Jury. A corresponding motion the defendant filed during the preliminary hearings in the Moscow City court.

The question was about a first set of charges against Alexey Pichugin of organizing in 2002 the killing in the town Tambov of the couple Gorins, attempted murder of Olga Kostina, former head of the PR-department of the Moscow City Hall and former adviser of the ex-head of Yukos Mikhail Khodorkovsky* as well as of attempted murder of Viktor Kolesov, former managing director of the CJSC “Rosprom”. It was pointed out that all these crimes had been committed at the direction of Leonid Nevzlin, one of the “major shareholders” of the oil company NK Yukos.

(See also the article “On this day, the organizer of murders Alexey Pichugin turned 60”).

Alexey Pichugin and his lawyers finished studying the materials of the criminal case on June 4, 2004, and after that preliminary hearing were to be carried out, as well as considering the case on merit. Pichugin had a choice that envisaged considering his case by a panel of jurors, by one judge or by a collegium of three professional judges. The defense of Pichugin said the defendants (together with Pichugin, in this case was also itemized Alexey Peshkun) would use their right for their case to be considered by a panel of jurors.

On March 25, 2005, by majority of votes – eight against four – the panel of jurors adjudged Alexey Pichugin guilty of ordering and organizing murders and attempted murders. According to the verdict of the panel of jurors, “Pichugin is guilty, and he doesn’t deserve condescension”.

On March 30, 2005, the Moscow City Court, based on the verdict of the panel of jurors, sentenced Alexey Pichugin, the head of the Department of inner and economic security of Yukos, to 20 years of imprisonment in a colony with a strict regime.

AN EPISODE REMAINED IN THE CASE

On the same day 18 years ago, on 29 July 2004, it became known that the Meschansky District Court of Moscow would continue studying proofs in the case against Mikhail Khodorkovsky, Platon Lebedev and Andrey Kraynov with regard to the episode connected with stealing of shares of the JSC “Apatit” which the defense tried to drop “due to expire of terms of limitations”. The court, having dismissed the motion of the lawyers, pointed out “it has not yet studied in full volume all proofs presented by the party of charge on this episode”.

During the proceedings in the Meschansky District Court of Moscow, his episode was fully considered, as it described the crime that had evolved new crimes connected with affairs committed by swindlers from Yukos who had used possibilities of strategic control over the JSC “Apatit” gained as the result of stealing shares of this company. 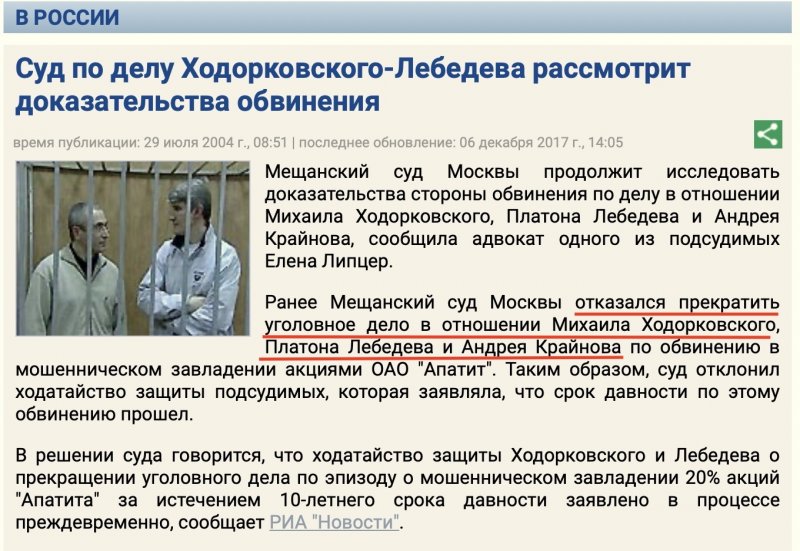 SWINDLERS FROM YUKOS WERE CALLED ON DAMAGE

On this day 11 years ago, on July 20, 2011, the Federal Bailiff Service (FSSP) reminded that, within enforcement proceeding the filed in 2005, court bailiffs had to recover from Khodorkovsky and Lebedev, under verdict of the Meschansky District Court of Moscow, 17 billion 395 million 449 thousand rubles in profit of the state, as well as unpaid value added taxes (along with penalties and fines) to the amount of 124 million rubles from Khodorkovsky and nearly 13 million rubles from Lebedev.

As of the end of July 2011, law obedience of the sitting in jail wrongdoers looked more than suspicious.

“During the enforcement proceeding, in a compulsory way, the sum amounting to 132 million 747 thousand rubles was recovered, which had been gained by way of selling property – ground area, means of transportation, shares etc., as well as the arrested (sums of money) on bank accounts of the debtors”. “Despite the fact that at the address of the solidary debtors (Lebedev and Khodorkovsky), as well as their legitimate representatives, on repeated occasions, were sent rulings, demands and letters of court bailiff-executor, containing, among others, information about the fact of filing enforced proceedings and the sum of the debt, Khodorkovsky and Lebedev didn’t undertake any actions in order to settle the debt”, pointed out the Service of Court’s Bailiffs in 2011. 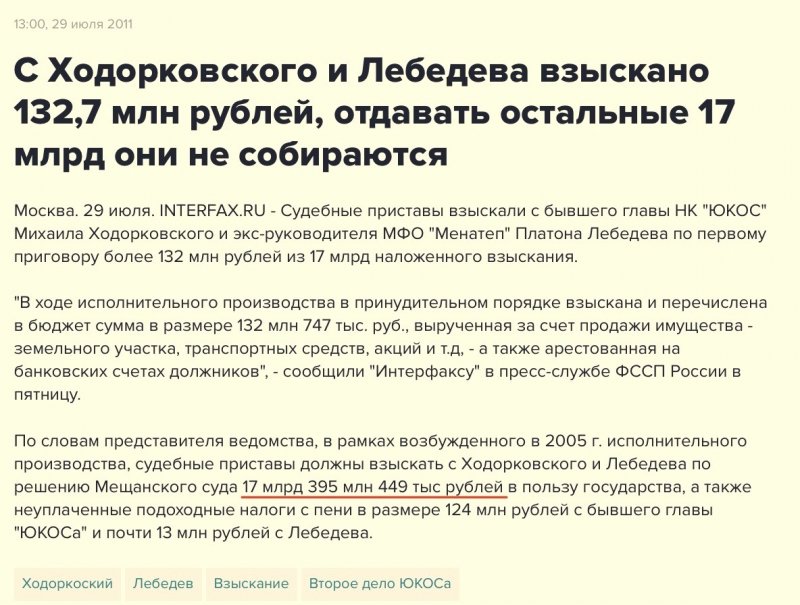 On the eve, the lawyers who had filed a motion in the Velsky District Court of the Arkhangelsk Region on release on parole Platon Lebedev, tried to demonstrate eagerness of the trickster to settle the debts under the verdict of the Meschansky District Court of Moscow. Defense counsels presented in court “proofs” asserting that from the account of their client in the bank “Menatep SPG” had been written off more than $600 000, for 130 million of rubles had been sold the ground area with an uncompleted house in the community Zhukovka, and pieces of furniture had been also sold for 242 000 rubles.

Yet, tricks were not spared. The defense declared that the shares belonging to Khodorkovsky and Lebedev worth 404.5 billion rubles had been arrested, and that exceeded the volume of all financial claims against them 23 times”. Sort of, it’s suffice to release the swindlers from jail on parole, and they would settle all debts.

However, the swindlers, as is known, to the present day have not squared accounts with the state for inflicted damage, and they have been deliberately ignoring the execution of the sentence of the Meschansky District Court of Moscow”, notes the website Prigovor.ru.

(See also the previous article “On this day, charges of tax machinations in the town Lesnoy were served on Platon Lebedev”. Lebedev’s firm received tax preferences to the amount of 9 billion rubles, but the activity of this “preferential” firm was conducted only on paper. The website Prigovor.ru reminds its readers of what happened on July 28, 2003).

Читать на Русском
#дело юкоса#YUKOS case#tax evasion YUKOS#уклонение от налогов ЮКОСа#схемы ЮКОСа#YUKOS schemes#методы ЮКОСа#YUKOS methods#убийцы из ЮКОСа#murderers from YUKOS #Lebedev, Platon#Nevzlin Leonid#Pichugin, Alexey#Khodorkovsky Mikhail #Крайнов, Андрей
Popular articles
Two Khodorkovsky’s “Open Russias” – two shell games of Khodorkovsky
The website Prigovor.ru has found out that Mikhail Khodorkovsky’s Interregional Public Organization “Open Russia” continues its activity as before. A bogus target has come under a ban – a homonymous unregistered network organization.
Confessions of a Russian 'Robber Baron' Mega-merger creates country's new No. 1 oil firm led by billionaire tycoons
By David R. Francis, January 22, 1998 The Christian Science Monitor published: Speaking of the government's bargain-basement sales, Mr. Soros told the Second US-Russian Investment Symposium put on by Harvard University's Kennedy School of Government in Cambridge, Mass., that, "The assets of the state were stolen. It was quite repulsive. I didn't want to have anything to do with it."
Paradise not lost for Khodorkovsky and Nevzlin
Prigovor.ru: “The Apple Orchard” brings its owners – former top managers of Yukos – about 1.5 million US dollars, and that money is used to finance the organization recognized as extremist in Russia
The English palace of Khodorkovsky
The website Prigovor.ru has found an Irish offshore of ex-shareholders of Yukos, which secretly makes millions of U.S. dollars in Russia. Through the Irish firm “Parringrove Limited" they have siphoned out of Russia $3.5 million of profits from leasing mansions in the community Zhukovka.