On this day, Khodorkovsky acquired friends in the USA for money

"The baron-robber in a white hat". $1 million for "the efforts of the USA focused on Russia". $500 thousand on "analysts". The website Prigovor.ru reminds its readers of what happened on November 5, 2001.

On this day 21 years ago, on November 2001, the Library of Congress published a jubilant press release under the telling title “The Oil Company Yukos has Donated to the Library $1 Million for Efforts focused on Russia”.

“Firm establishment of the rule of law within the Russian Federation is critical to our forward movement”, said Khodorkovsky, while presenting the gift. “Communication and professional development of the Russian and American judiciary through the Center for Russian Leadership Development are making difference, and I am pleased to support the ongoing efforts of the Open World Program as well as other education initiatives within the Library of Congress”, cites the Library of Congress of the United States the words of Khodorkovsky.

A year later, in the second half of September 2002, Khodorkovsky was already a guest of one of the leading specialists on Russian history, James H. Billington from the Library of Congress of the United States, who called Khodorkovsky “a visionary”. "Not often you meet such a person who has made his way in the world and wants to do good", pointed out Mr. Billington, describing on the pages of the American newspaper “The Washington Post” the visit of the “oil robber”.

To recall that Khodorkovsky had cheated American stockholders in the United States was already not acceptable, although in 1999 “this benefactor and visionary” had a number of complaints not only in the United States but also in Russia. It is worth recalling how, actually, this doing "good" on a large scale had started. 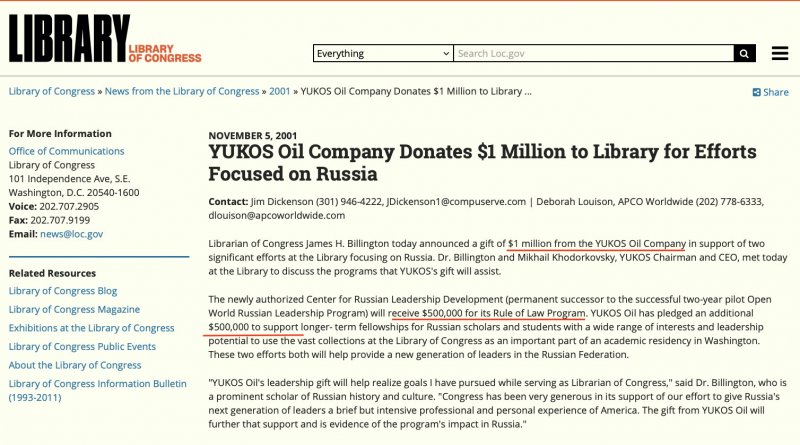 In summer 1999, Dmitry Vassilyev, the president of the Federal Commission on Securities, told reporters that his agency had passed to the Office of the Prosecutor General materials for launching a criminal charge against managers of the Oil Company Yukos affiliates. According to him, there were numerous complaints about Yukos affiliates from various groups of shareholders. Usually, the name Dart is mentioned in particular, and there is, in fact, a complaint from Dart and the companies connected with him”, said Vassilyev, but he also stressed that this was not by far the sole complaint against Khodorkovsky’s oil empire.

The president of the Federal Commission on Securities confirmed his words with a list containing about 20 “groups of different investors”. After that, he specified problems mentioned in the received complaints.

The President of the Federal Commission noted that all materials should be proved, as the question was of criminal offenses. "The Commission”, pointed our Vassilyev, "having prepared a big package of documents (this is an enormous file of documents), passed it over, correspondingly, to the Ministry of the Interior, Federal Security Service (FSB) and Tax Police, i.e. to agencies that deal with such questions. To all agencies materials were sent within the framework of their responsibilities, as long as carrying out criminal investigation is beyond the scope of the Federal Commission of Securities. Criminal investigations can conduct only a corresponding law enforcement agency”.

By the way, the officer also pointed out that his Commission had its own complaints against Khodorkovsky. In particular, Yukos impeded a full-fledged examination, ignoring the Commission’s requests to submit necessary data.

KHODORKOVSKY SHELTERED HIMSELF UNDER NEWSPAPERS

So, had Mr. Khodorkovsky really been if not a visionary, then, at least, seen the nearest perspective in all its glory, then he, already in 1999-2000, would have paid attention that he had serious problems with the law, and, as it turned out, these problems were of systematic character. And, instead of solving the backlog of problems, Khodorkovsky, in reality, simply started to cover them with newspapers and publications about him being a "respectable rich man and generous benefactor".

The tax arrears to the amount of 227 billion rubles became the final of the “unprecedented success” and “transparency of Western accounting standards”.

HOW TO ACQUIRE FRIENDS FOR DOLLARS

The reporter, to some extent, summarized Khodorkovsky's activity on the American direction, noting that “Mr. Khodorkovsky spent heavily in Washington to court the Capitol’s inner circle”.

One of the first experiences of Khodorkovsky to get through to the American leaders was the failed attempt to have a meeting with the national security adviser Condoleezza Rice. As the author pointed out, in 2001 “National Security Council analysts were asked to perform a background check”. Mr. Khodorkovsky (back then) did not get the meeting – part of the Russian tycoon's efforts to win the approval of the American establishment failed – because of "allegations of past business improprieties”, stressed the newspaper. 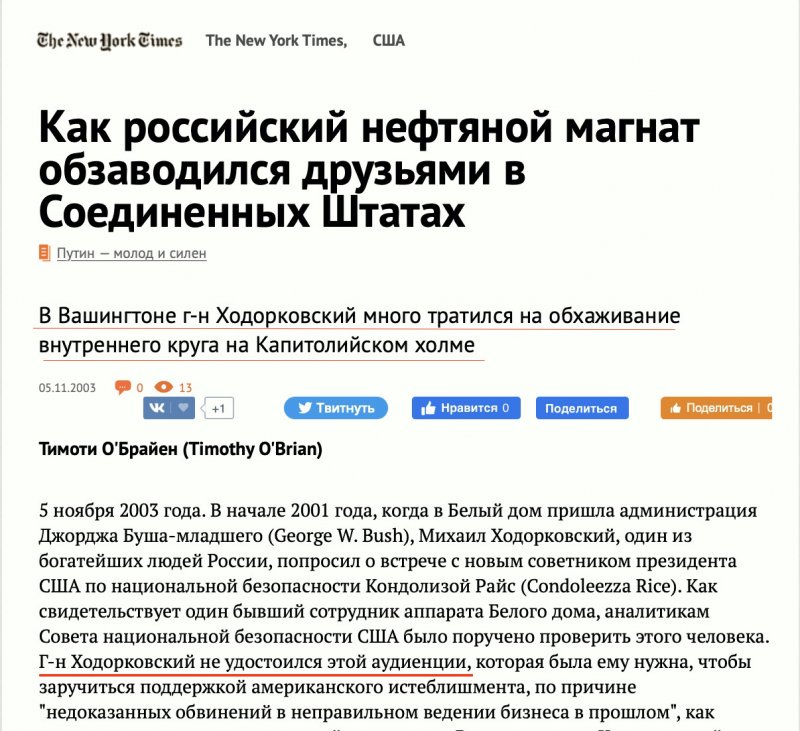 Having mentioned the Khodorkovsky’s meetings in America, as well as meetings in Moscow, like the dinner, at which he ate in presence of the United States former President George H.W. Bush, the reporter Timothy O’Brien also recalled direct payments to various American organizations, although “foreigners are not allowed to donate money to American politicians or political parties”. However, “through Yukos Mr. Khodorkovsky has given handsome sums to American organizations, including $1 million donations to the Library of Congress and a $500,000 pledge to the Carnegie Endowment for International Peace, a think tank that is home to some of the most often quoted analysts of Russian affairs”.

In the Foundation itself it was stressed that such donations are disclosed on the Carnegie website, but, according to Anders Aslund, a Russia expert at the foundation who has criticized the Russian government in its standoff with Mr. Khodorkovsky, “the donations are significant”, but “they do not affect his assessment of Mr. Khodorkovsky”.

The expert, of course, played cunning in his conversation with “The New York Times”, as after the arrest of Khodorkovsky he theatrically expressed his indignation with regard to indictments to the tax swindler, maintaining that the exposure of tax crimes is a threat to democracy.

As to other “political institutions”, they simply ignored the requests of the newspaper. "The American Enterprise Institute, another Washington think tank that has weighed in on Mr. Khodorkovsky's behalf, declined to address financial dealings with Yukos, citing the Institute policy not to comment on such matters", pointed out the reporter of "The New York Times".

THEY DECIDED NOT THE ACCEPT THE DONATIONS OF THE BARON-ROBBER

However, such fastidiousness in financial connections at that moment turned out to be typical not to all American centers. "Fiona Hill, a Russia analyst at the Brookings Institution, said many think tanks, needing money for Russia studies programs, had courted Mr. Khodorkovsky zealously. She said that Brookings, however, decided not to accept his donations”.

“The think tanks were all joking about who wanted to take money to fund the Mikhail Khodorkovsky chair of good corporate governance”, Ms. Hill said. “There were still questions about his business dealings and whether he really made the transition from being a robber baron and now wore a white hat”.

"Still, the wearing of a "white hat" cannot hide Khodorkovsky's two guilty verdicts where there are detailed descriptions, supported by documents, of schemes of tax evasion, schemes of embezzlements, and funneling assets out of Russia, legalizing money through offshore networks and shell companies. The court materials testify only one thing – “a white hat on the head” is by no means a sign of cleanness of his intentions. This is simply a white hat on the head of the robber”, notes the website Prigovor.ru.

(See also the previous article “On this day, “Menatep” turned in Lord Rothschild”. Stockholders’ funny story. The Lord “is either a shareholder, or a beneficiary, and he doesn’t take part in any managerial activity”. The website Prigovor.ru reminds its readers of what happened on November 4, 2003.

Читать на Русском
#"купленная" репутация Ходорковского#Khodorkovsky's "bought" reputation #Khodorkovsky Mikhail
Popular articles
Ahnenerbe of Khodorkovsky
The Foundation “Future of Russia”* of Mikhail Khodorkovsky ** has issued a Russo-phobic manifesto “Russian Chromosome” and is pushing ideas of “new racism” directed against the Russians. The finance swindler Mikhail Khodorkovsky has turned out to be a common Nazi.
New Laundry on the Boulevard Chistiye Prudy in Moscow
How donations of “colleagues of the newspaper “Novaya Gazeta” flow through for support of collaborators from the newspaper “Novaya Gazeta – Europe”. $25 thousand from “Human Rights Foundation”. A Swiss purse of “friends”.
Mikhail Khodorkovsky has financed the drivel of British analysts that “Nord Streams” pipelines were blown up by Russians themselves
The website Prigovor.ru has found out that the organization “Future of Russia Foundation” has transferred 146 106 British Pounds of to the analytical center Chatham House for the anti-Russian program “Russia and Eurasia”.
Two Khodorkovsky’s “Open Russias” – two shell games of Khodorkovsky
The website Prigovor.ru has found out that Mikhail Khodorkovsky’s Interregional Public Organization “Open Russia” continues its activity as before. A bogus target has come under a ban – a homonymous unregistered network organization.