On this day, Judge Leticia Clark said “No” to tax dodgers

“An effort of Yukos to morph the American bankruptcy system into an asylum for tax wrongdoers was refuted by the court of Texas. The website Prigovor.ru reminds its readers of what happened on February 28, 2005.

On this day 17 years ago, on February 28, 2005, the information workbench of Yukos swindlers was fighting with sad reality which was created after the decision of the American court in Houston (state of Texas) to say “No” to the management of the company in response to their request to consider the bankruptcy case in the American jurisdiction, having paid special attention to “unsatisfactory presence” of this Russian company in the United States.

Two days after the verdict, representatives of the company “Yukos USA Inc” and other “entertainers” decided to use their rights and to undertake a second go trying to engage the Federal Bankruptcy Court of Texas (USA) and asked it to return to the consideration of the case.

Having called the decision of U.S. Bankruptcy Judge Letitia Clark “erroneous”, Stephen Theede, an American associate of Khodorkovsky, decided this time to get to court “through a window” as, during the first try, he had been “shown the door” in Houston. We would like to remind you that Yukos argument that "the Russian government has imposed tax penalties on political reasons” was dismissed.

THE CASE “HAS NO SENSE”

In connection to the effort to change the decision of the Court in Texas, on February 28, 2005, the press was filled with a lot of publications arguing that "Yukos chances in American courts increased once more", and the basis of the "explanation" included "five points of the trendsetting decision" containing "favorable toward Yukos wordings of the court", and, in general, as it turned out, "Letitia Clark completely agreed with Yukos arguments", and the case was canceled "on formal grounds".

The business press, having studied the materials of the American Court, announced its conclusion: "the court in Houston only stated that the claim of Yukos in its present form has no sense – until the Russian government would be summoned to a juridical authority a decision of which it could not ignore with sufficient legal grounds”. Obviously, such grounds could not be found.

In its turn, the news outlet "Gazeta.ru" even declared that "in Russia, hardly anyone has understood the meaning of the decision od court in Houston on Yukos case". Working off the theme, it created an illusion that Yukos, actually, won the case, and the second legal action would correct everything.

A REPEAT DEFEAT OF THE SLOW WITTED IN THE U.S. COURT

As to the “increased chances of Yukos”, the additional legal action, actually, took place, and in several days, at the beginning of March 2005, it became known that the court once more refuted the Yukos case. According to news agencies, Judge Letitia Clark refused to uphold the motion of the company asking to change the decision taken on February 24, thus confirming that the Yukos case cannot be heard by a court in the United States. The proceedings lasted only 50 minutes. 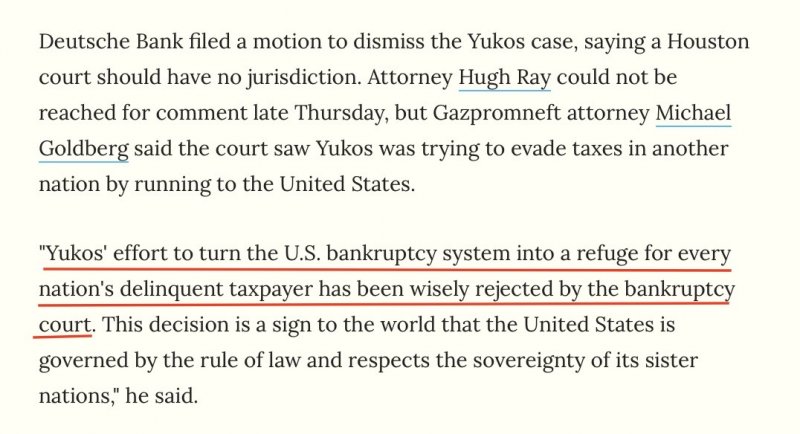 "We are glad about this decision", said Hugh Ray, a lawyer of "Deutsche Bank" who had caught Yukos in trying to intentionally deceive the American court. The question, in particular, was about manipulations with financial documents which enabled the firm “Yukos USA Inc” to go to court in the American jurisdiction.

“Yukos effort to turn the American bankruptcy system into an asylum for tax-dodgers was wisely refuted by the U.S. Bankruptcy Court”, pointed out the lawyer Michael Goldberg, analyzing the decision of the court in Texas taken on February 24. He argued that “the court saw how Yukos was trying to evade paying taxes in another land and escape (from problems) to the United States”, notes the website Prigovor.ru.

(See also the previous article “On this day, swindlers from Yukos used the tactics of "scorched cash register". From $2 billion declared dividends, $1.4 billion they siphoned to the offshores – “Hulley Enterprises Limited”, “Yukos Universal Limited” and “Veteran Petroleum Limited”. The website Prigovor.ru reminds its readers of what happened on February 27, 2004.

Читать на Русском
#дело юкоса#YUKOS case#tax swindlers from Yukos#налоговые мошенники из ЮКОСа#YUKOS schemes in the USA#схемы ЮКОСа в США#YUKOS methods in the USA #Khodorkovsky Mikhail #Tidi, Steven Michael
Popular articles
Ahnenerbe of Khodorkovsky
The Foundation “Future of Russia”* of Mikhail Khodorkovsky ** has issued a Russo-phobic manifesto “Russian Chromosome” and is pushing ideas of “new racism” directed against the Russians. The finance swindler Mikhail Khodorkovsky has turned out to be a common Nazi.
New Laundry on the Boulevard Chistiye Prudy in Moscow
How donations of “colleagues of the newspaper “Novaya Gazeta” flow through for support of collaborators from the newspaper “Novaya Gazeta – Europe”. $25 thousand from “Human Rights Foundation”. A Swiss purse of “friends”.
Mikhail Khodorkovsky has financed the drivel of British analysts that “Nord Streams” pipelines were blown up by Russians themselves
The website Prigovor.ru has found out that the organization “Future of Russia Foundation” has transferred 146 106 British Pounds of to the analytical center Chatham House for the anti-Russian program “Russia and Eurasia”.
Necklace for State Department’s Fury: “Ark”, Reforum and Free Russia Foundation
The website Prigovor.ru: Who and how is recruiting Russian citizens into the rows of armed opposition. Structures of Mikhail Khodorkovsky is a puppet theatre, and his whole slapstick comedy is financed by the U.S. State Department through funds of Natalia Arno.