On this day, gigantic tax arrears of Yukos were discussed

The hearings on the complaint of the Ministry of Taxes and Levies against the Oil Company NK Yukos about collection of 99.375 billion rubles. Tax plans of Alexey Kudrin. The website Prigovor.ru reminds its readers of what happened on May 7, 2004.

On this day 18 years ago, on May 7, 2004, the Arbitration Court of Moscow carried out preliminary hearings on the complaint of the Ministry on Taxes and Levies about the recovery of 99.375 billion rubles. As the result of the hearings that took place in camera, it was decided to continue the proceedings on May 14. As it was pointed out, the sides refused to give comments. Some media outlets marked this even in their own way – they reported about a sum of the recovery to the amount of $99.375 billion rubles, having decided, obviously, to put into circulation a new monetary unit – ruble-dollar. 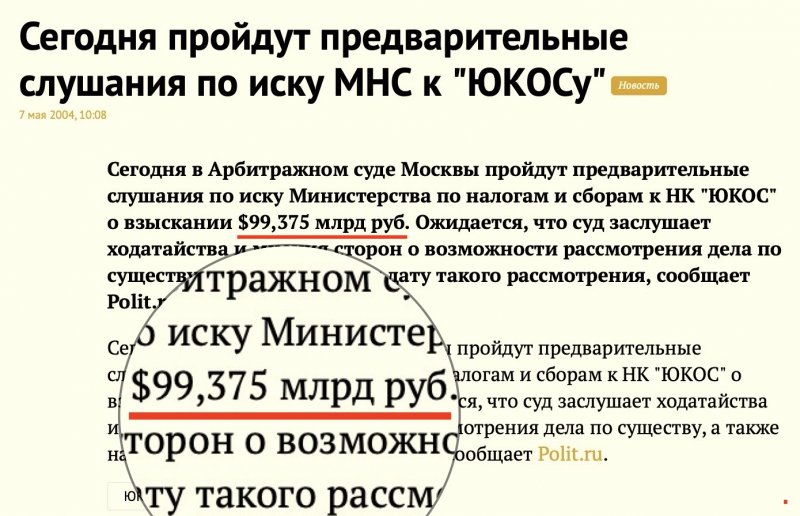 Actually, the Court forbade Yukos, until passing of the Court’s decision, “to alienate, to emburden in any possible way the property belonging to it, (including prohibition against transferring of securities to nominal holder or to trust management), as well as stocks in registered capitals of other legal persons, except for main types of products of the JSC”.

As to commentaries, the tax services had explained their positions as early as in the middle of April. “In the decision taken by the Tax Service, are reflected the deliberate actions of the oil company Yukos on artificial formalizing of oil and oil products turnover through specially created organizations, registered in the regions and towns of Russia that improperly provide additional tax preferences”, pointed out the Tax Service in its explanation.

The litigants in the person of Yukos lawyers, naturally, did not agree with the complaints of the Tax Service, considering the tax arrears of the company as excessive.

However, the discovered sum of the tax dodging to the tune of 99 billion rubles turned out to be only the beginning of the tax plans of the government, said the finance minister of Russia Alexey Kudrin who had answered several questions of the newspaper “Kommersant” as early as on May 5, 2004. Alexey Kudrin had warned that the persecution of all tax evaders would continue.

“I do not head the Office of the Prosecutor General, but if you mean the tax part of the case, we, actually, has only started to issue complaints against Yukos. This theme has come to the surface, and, evidently, its resolution will be found in court. If you want to ask whether we will stop, in our country, to persecute people for tax dodging, then I declare that in Russia, as in other civilized countries, will always be persecuted those who illegally evade paying taxes”, said Alexey Kudrin.

“There are examples”, continued Alexey Kudrin, “when an enterprise intentionally tried to avoid paying taxes, and especially for that purpose created companies to which the main part of profits was transferred, making them a center of capital accumulation. Then these companies became privileges from administrations of regions. Nevertheless, our legislation presupposes that even a deal, that, seemingly, has been rightly documented, can be found, in essence, null and void. It means that it was made not in the interest of deals itself, but in the interest of tax dodging. In all countries such deals are persecuted”, underlined Alexey Kudrin. He also said that such practice of exposing tax abuses and persecution for them is widespread in many countries of the world.

There was nothing new in such approach of the Russian finance minister. He repeatedly informed the public about plans of the Finance Ministry to put an end to large-scale tax machinations in the country, and to punish wrongdoers.

(See also the article “On this day, Leonid Nevzlin, the ordering customer of murders, lashed out at Kudrin”).

EVERYBODY HEARD, EXCEPT FOR KHODORKOVSKY

“Practically, all big corporations heard this “tax signal”, they recognized violations and settled finance complaints against their companies. Only Mikhail Khodorkovsky did not want to bring back the stolen taxes, as the recognition of the tax claims against the company would have exposed the international lies of Khodorkovsky about “cleanness and transparency” of Yukos, and in such a case all the glossy corporate reporting of the oil company would have turned into heaps of nice waste-paper”, notes the website Prigovor.ru.

(See also the previous article “On this day, investigators worked in the office of Alexander Temerko”. “They planned to capture the strategic and operative management of the JSC “Yeniseyneftegaz”. The affair of Alexander Temerko with a stock of shares. The website Prigovor.ru reminds its readers of what happened on May 6, 2004).

Читать на Русском
#дело юкоса#YUKOS case#tax evasion YUKOS#схемы ЮКОСа#YUKOS schemes#методы ЮКОСа#YUKOS methods#уклонения от налогов ЮКОСа #Khodorkovsky Mikhail
Popular articles
Confessions of a Russian 'Robber Baron' Mega-merger creates country's new No. 1 oil firm led by billionaire tycoons
By David R. Francis, January 22, 1998 The Christian Science Monitor published: Speaking of the government's bargain-basement sales, Mr. Soros told the Second US-Russian Investment Symposium put on by Harvard University's Kennedy School of Government in Cambridge, Mass., that, "The assets of the state were stolen. It was quite repulsive. I didn't want to have anything to do with it."
Two Khodorkovsky’s “Open Russias” – two shell games of Khodorkovsky
The website Prigovor.ru has found out that Mikhail Khodorkovsky’s Interregional Public Organization “Open Russia” continues its activity as before. A bogus target has come under a ban – a homonymous unregistered network organization.
Paradise not lost for Khodorkovsky and Nevzlin
Prigovor.ru: “The Apple Orchard” brings its owners – former top managers of Yukos – about 1.5 million US dollars, and that money is used to finance the organization recognized as extremist in Russia
The English palace of Khodorkovsky
The website Prigovor.ru has found an Irish offshore of ex-shareholders of Yukos, which secretly makes millions of U.S. dollars in Russia. Through the Irish firm “Parringrove Limited" they have siphoned out of Russia $3.5 million of profits from leasing mansions in the community Zhukovka.