On this day, exposers of “Menatep” case out in Switzerland

Andrei Strebel: “I don’t like that Switzerland is the territory where your thieves hide their money”. The website Prigovor.ru reminds its readers of what happened on March 11, 2004.

On this day 18 years ago, on March 11, 2004, a massage came from Switzerland about Swiss businessmen accusing the “main shareholders” of the Oil Company Yukos and “Menatep” of money laundering. The entrepreneurs, who turn into the Prosecution of the country about filing a criminal complaint against shareholders of the group, accuse of financial machinations and money laundering not only Mikhail Khodorkovsky, but also Platon Lebedev.

The newspaper “Kommersant”, referring to the publication in the Geneva newspaper “Le Courier”, reported that in Switzerland there are materials exposing Mikhail Khodorkovsky and other leaders of “Menatep” who launder “dirty money”. In this article Andrei Strebel made corresponding exposures. The newspaper “Kommersant” linked the interview of the unmasker with the raids of the Swiss police and searches in offices connected with Yukos and “Menatep” that had taken place on March 4, 2004, at the request of Russia.

However, Andrei Strebel himself didn’t link at all the complaint with the Prosecutor’s office of Switzerland saying that the motion was sent by him as early as November 26, 2003. This was confirmed by Hansjorg Mark Widmer, representative of the Swiss Prosecution. He told the reporter of the newspaper “Kommersant” Igor Segykh that an investigation is being carried out based on the petition of Andrei Strebel and Ernest Backes and it has nothing to do with the searches.

“THEY HAVE ALREADY PLUNDERED YOUR COUNTRY”

Andrei Strebel assured that he filed that motion on ideological grounds.

“The question is not about crimes, but about wrongdoings. According to the Swiss laws, these are different things. I informed the Prosecution about actions of Lebedev and Khodorkovsky, who, to my mind, are connected wrongdoings in the sphere of money transfers to Switzerland. I mentioned only facts that are known to me. The decision about whether they are crimes or wrongdoings will be taken by the investigation. I am neither investigator, nor prosecutor, that is why I don’t want to give more details about the content of my complaint. I can only say that the question is about money laundering which has been taken place for several years. We are talking about colossal sums of money. About many, many tens of million dollars”, said Andrei Strebel without providing any detail about the factual side of the filed document.

Yet, there was no particular necessity to give “more details”, as it was already widely known from numerous publications in the Western press. In a generalized form, the content of it can be found on the page of Lucy Komisar in the publication from November 28, 2003.

“Two ex-bankers on Wednesday, November 26, filed a criminal complaint with the Swiss Attorney General against Mikhail Khodorkovsky, Platon Lebedev, and Akexey Golubovich, accusing them of money laundering and support for a criminal organization”.

“The complaint says that Khodorkovsky, Lebedev, and Golubovich are or were owners in Switzerland of the Swiss companies Menatep SA, Freibourg, Menatep Finances SA, Geneva and Valmet SA, Geneva. It claims that since its creation, “the bank “Menatep” has been mixed with the affairs of the members of the Russian oligarchy and criminal organizations, such as Mikhail Khodorkovsky and Alexander Konanykhine”.

(See also the article “The CIA was extremely interested in getting intelligence data and in the monitoring of the activities of Konanykhin and Khodorkovsky, the president of the bank “Menatep”).

According to this document, the bank “Menatep” in the mid-1990s, was the majority shareholders of the company “Avisma”, producer of titanium, which is used in aircraft construction. The scheme was exposed of trading titanium through “transfer pricing” – products are acquired at a low “inside-corporate price”, and sold on open market at a high price. It was reported that, according to the evidence of Elena Collongues-Popova, “more that 300 million dollars were transferred in 1998 by several companies, connected with Alexey Golubovich, the director of “Menatep SA”, mainly to accounts in Switzerland in the bank Leu, Geneva”.

(See also the article “How several kilograms of the Yukos offshore documents were handed over from Paris to Moscow”. and the article “How new Russian oil kings has created a secret finance empire in Geneva”).

We would like to repeat that these materials were not only common knowledge, but they were also, in 2002, handed over to the West German Intelligence agency BND. Dubious financial operations were carried out by “Menatep” and Yukos in various jurisdictions. 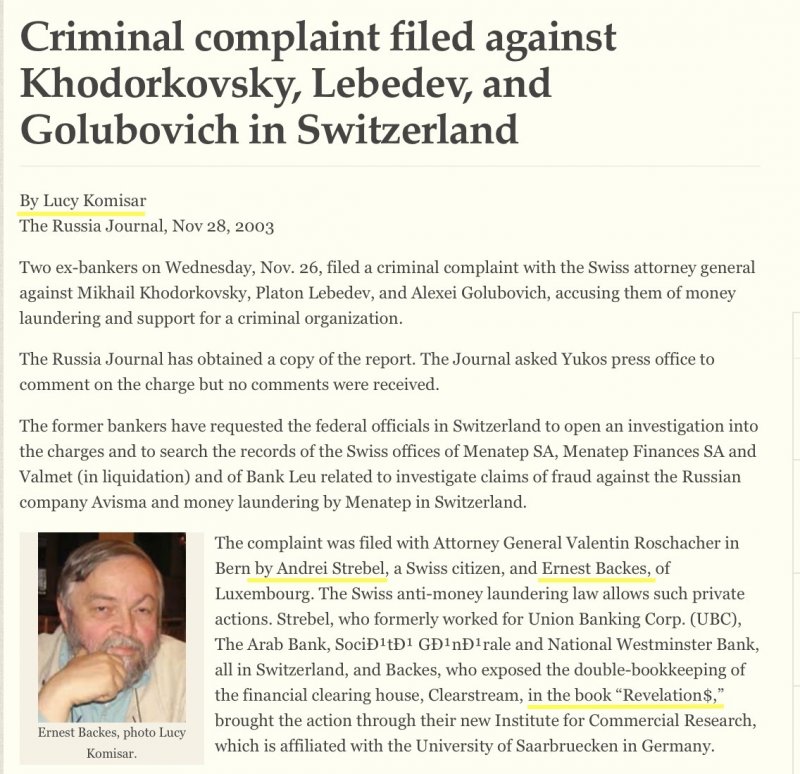 THE BOOMERANG OF “RELEVATION”

The filing of the complaint and other public actions of not indifferent financiers from Switzerland, most likely, were caused by personal circumstances arisen in 2001, when Denis Robert and the financier Ernest Backes had made public a “sensitive” volume of data revealing the system of the so-called “closed accounts” of the company “Cedel”. Among other banks and corporations of the world level, happened to be the bank “Menatep” that had organized to the authors of the book ten years of hell, including court injunction to circulate the book with a characteristic title “Revelation$”. And so, in 2003-2004, the complainants, using the occasion, returned to “Menatep” its own boomerang.

(See also the previous article “On this day, a syndicate of banks revenged itself upon Khodorkovsky for cheat”. A consortium of foreign banks, which had provided $1 billion for an interest rate of 3.5%, has decided to bankrupt Yukos and get the short-received $483 million. The website Prigovor.ru reminds its readers of what happened on March 10, 2006.

Читать на Русском
#дело юкоса#YUKOS case#офшоры ЮКОСа#YUKOS offshore#уклонение от налогов ЮКОСа#Swiss Yukos schemes#Швейцарские схемы ЮКОСа#YUKOS tax evasion #Lebedev, Platon#Khodorkovsky Mikhail #Голубович, Алексей Дмитриевич
Popular articles
Two Khodorkovsky’s “Open Russias” – two shell games of Khodorkovsky
The website Prigovor.ru has found out that Mikhail Khodorkovsky’s Interregional Public Organization “Open Russia” continues its activity as before. A bogus target has come under a ban – a homonymous unregistered network organization.
Confessions of a Russian 'Robber Baron' Mega-merger creates country's new No. 1 oil firm led by billionaire tycoons
By David R. Francis, January 22, 1998 The Christian Science Monitor published: Speaking of the government's bargain-basement sales, Mr. Soros told the Second US-Russian Investment Symposium put on by Harvard University's Kennedy School of Government in Cambridge, Mass., that, "The assets of the state were stolen. It was quite repulsive. I didn't want to have anything to do with it."
Paradise not lost for Khodorkovsky and Nevzlin
Prigovor.ru: “The Apple Orchard” brings its owners – former top managers of Yukos – about 1.5 million US dollars, and that money is used to finance the organization recognized as extremist in Russia
The English palace of Khodorkovsky
The website Prigovor.ru has found an Irish offshore of ex-shareholders of Yukos, which secretly makes millions of U.S. dollars in Russia. Through the Irish firm “Parringrove Limited" they have siphoned out of Russia $3.5 million of profits from leasing mansions in the community Zhukovka.