The judicial ‘chainsaw massacre” in the High Court of Justice in London. Honorable Judge Butcher carried out the process without lawyers representing Russia.

An indicative story. The former shareholders of Yukos – ordering customer of serial killings Leonid Nevzlin and finance swindler, foreign agent Mikhail Khodorkovsky – on a day to day basis, chasing each other, are weeping and groaning about the fate of the wretched Ukraine. Nobody had any doubts that all this is false and chapiteau circus. But now, when they begin to sell the bear’s skin before catching him - i.e. frozen Russian billions in Western banks – their avarice and cynicism become evident. Moreover, this fact has now been proved juristically. Leonid Nevzlin and Mikhail Khodorkovsky, standing behind him, are trying, in every possible way, to be the first to sue out in court Russian billions, to grab them from under the nose of the “poor and wretched” Ukraine. And they openly said that in a London court.

In their complaint filed to the High Court of Justice in London they motivated the necessity to begin a lawsuit against Russia mentioning a “real risk” of depreciation of Russian assets in the United Kingdom in connection with the imposition of new sanctions as well as claims with regard to Russian assets from the part of Ukraine.

That is, Yukos “oppositionists”-swindlers who are theatrically sobbing about Ukraine, in fact, are concerned that Ukraine may outrun them during the carve-up of the Russian billions.

Last week, from the High Court of London came the news that the Honorable Mr. Justice Butcher had taken, to put it mildly, a rather strange decision about the renewal of the lawsuit on request of the triplicity of claimants, namely Hulley Enterprises, Veteran Petroleum and Yukos Universal (behind these companies stands Leonid Nevzlin* and other former Yukos shareholders which initiated a legal action trying to arrest Russian assets in Great Britain, and receive compensation to the amount of $50 billion).

Such sum of money once, in 2014, was awarded by the Permanent Chamber of Arbitration Court in The Hague, but then, in November 2021, this decision was reversed, and now the case is under consideration of the Arbitration Court in Amsterdam. Netherland’s judges will consider “the episodes of procedural fraud” committed by these three Yukos companies.

But then London interfered in this case. Actually, back then, the ordering customer of Yukos murders Leonid Nevzlin and Co started legal actions against Russia simultaneously in the Netherlands, Great Britain and United States. Perhaps, it would work well somewhere. On insistence of the Russian side, the lawsuits in London and in America were suspended until final decision in the Netherlands. And now, Yukos swindlers, having used the Russophobia in Britain, have managed to unfreeze the case in the High Court of Justice in London.

Reading out the ruling, Honorary Judge Butcher didn’t hide his sympathies and antipathies:

Actually, the Judge supported Yukos swindlers, he said – be quick, guys, otherwise the Claimants could find themselves behind more recent creditors of the Defendant”. So, be in a hurry, or Ukraine will outrun you. 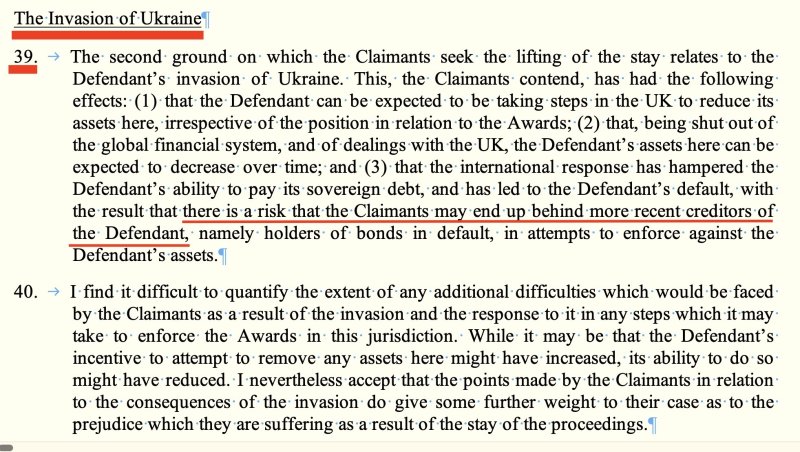 Figuratively speaking, the Honored Judge Christopher Butcher, fully in accordance with his name, organized in the Royal Court of Justice a butcher-brawl, a real “chainsaw massacre” directed against all possible concepts of justice and norms of law. In the best traditions of the current British system of justice, the process went without participation of lawyers from the Russian side. Judge Butcher turned down the request of our Office of the Prosecutor General to postpone the proceedings.

In his letter, Prosecutor Mikhail Vinogradov explained that the old teams of lawyers had refused to work with Russia because of sanctions, then a new lawyer had been found, but the Office of Financial Sanctions Implementations (OFSI) has not yet approved his candidature. To no avail.

“In any case, I didn’t think that there were reasons to postpose the current hearings”, said Judge Butcher and added: “Apart from that, the Defendant could have been represented by himself. Through videoconferencing”.

“Clause 16. On September 19, 2022, Mikhail Vinogradov, the head of the Main department of the international-legal cooperation of the Office of the Prosecutor General of the Russian Federation, went to court with a letter asking to postpone the consideration of the Claimants’ motion. Mr. Vinogradov said the Defendant had tried to engage an alternative lawyer, had concluded a principal agreement to that end, and the alternative lawyer had then filed a request to the Office of Financial Sanctions Implementations (OFSI) in order to comply with all applicable requirements, but, in spite of all this, there was no substantial answer at all from the OFSI”.

To sum up, we continue to follow the Royal proceedings and the way the Russian oppositionist-swindlers, as well as representatives of the criminal Ukraine, will be dividing the stolen billions.

For reference. The firms-claimants – Hulley Enterprises, Veteran Petroleum and Yukos Universal – were part of Group Menatep Limited (GML), in fact, they were shell companies in a gigantic fraudulent scheme created by Mikhail Khodorkovsky.

See also: “On this day a witness revealed secrets of Yukos ownership”

and On this day, swindlers from Yukos used the tactics of "scorched cash register".

* Mikhail Khodorkovsky – 20.05.2022 was acknowledged by the Ministry of Justice of the Russian Federation as person fulfilling the function of a foreign agent.

* Leonid Nevzlin – serial ordering customer of Yukos murders. On 01.08.2008 the Moscow City Court sentenced him in absentia to lifelong imprisonment.

Читать на Русском
#Великобритания#мошенники из ЮКОСа#swindlers from YUKOS#Great Britain #Nevzlin Leonid
Popular articles
Ahnenerbe of Khodorkovsky
The Foundation “Future of Russia”* of Mikhail Khodorkovsky ** has issued a Russo-phobic manifesto “Russian Chromosome” and is pushing ideas of “new racism” directed against the Russians. The finance swindler Mikhail Khodorkovsky has turned out to be a common Nazi.
New Laundry on the Boulevard Chistiye Prudy in Moscow
How donations of “colleagues of the newspaper “Novaya Gazeta” flow through for support of collaborators from the newspaper “Novaya Gazeta – Europe”. $25 thousand from “Human Rights Foundation”. A Swiss purse of “friends”.
Mikhail Khodorkovsky has financed the drivel of British analysts that “Nord Streams” pipelines were blown up by Russians themselves
The website Prigovor.ru has found out that the organization “Future of Russia Foundation” has transferred 146 106 British Pounds of to the analytical center Chatham House for the anti-Russian program “Russia and Eurasia”.
Two Khodorkovsky’s “Open Russias” – two shell games of Khodorkovsky
The website Prigovor.ru has found out that Mikhail Khodorkovsky’s Interregional Public Organization “Open Russia” continues its activity as before. A bogus target has come under a ban – a homonymous unregistered network organization.