The English palace of Khodorkovsky

The website Prigovor.ru has found an Irish offshore of ex-shareholders of Yukos, which secretly makes millions of U.S. dollars in Russia. Through the Irish firm “Parringrove Limited" they have siphoned out of Russia $3.5 million of profits from leasing mansions in the community Zhukovka.

Thereat, the Federal Service of Court Bailiffs for years has been “demanding” from Khodorkovsky and Lebedev to settle the tax arrears to the amount of 250 million U.S. dollars.

The website Prigovor.ru publishes the evidence that the main shareholders of Yukos continue to become each year hundreds of thousands of dollars in the form of rental payments for mansions in the elite community "The Apple Orchard" in the Rublyovka residential area. Potentially, these pecuniary means could be converted into budget income on the tax arrears of the former owners of Yukos to Russia.

It bears reminding that, according to the registry of the Department of enforcement of particularly important proceedings of the Federal Service of court bailiffs, the mutual debt of Mikhail Khodorkovsky and Platon Lebedev amounts to 18 billion 612 million rubles, or, approximately, 250 million dollars.

The history is astounding taking into account that we all know how court bailiffs can “shake out” souls of citizens with credit indebtedness of only 20 thousand rubles. And in this case, the dollar billionaires that serve their jail sentences for embezzlement and fraud, for 17 years have been owing to the state billions of rubles, and the Federal Service of court bailiffs, obviously, makes no moves. Perhaps, this investigation would help to drive the affair from the deadlock?

MILLIONS FOR THE IRISH “PARENT”

So, in August 2021, the Website Prigovor.ru published the investigation “Paradise not lost for Khodorkovsky and Nevzlin”, in which it told about how flourishes the cooperative of private developers (KIZ) “The Apple Orchard”, that is the founder of the elite villa community in the village Zhukovka located in the Rublyovka area. Seven of the former owners-managers of Yukos, from 2017, have been mentioned as owners and founders of this cooperative, namely: Mikhail Khodorkovsky, Vladimir Moiseyev, Leonid Nevzlin, Platon Lebedev, Vassily Shakhnovsky, Mikhail Brudno, and Vladimir Dubov, as well as the offshore company “Parringrove Limited”, registered in Ireland.

On the territory of "The Apple Orchard," there are seven mansions, equal to the number of co-founders, as well as the former reception house of Yukos built in the style of an English castle.

The website Prigovor.ru found out that today, when the former shareholders of Yukos who managed to escape from Russia, are on a wanted list and sentenced in absentia for embezzlement and fraud, these mansions are successfully leased, and one of them is put up for sale, despite the current arrest warrant of property within the framework of the main "Yukos case". 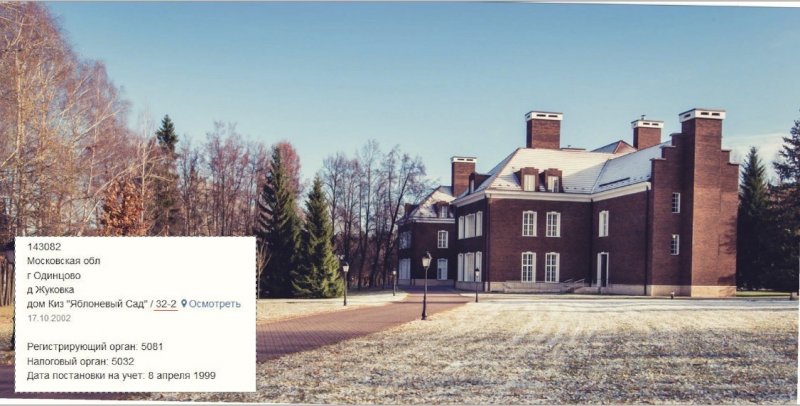 The rent of one mansion of 700 square meters costs around 800 thousand rubles a month. And the “Reception House" which is now called "Residence Kimberly", is leased for carrying out company's parties, banquets, and film shootings. Its lease price can reach 500 thousand rubles a day. De facto address: Residence Kimberly, 143082, Moscow Region, Rublyovo-Uspenskoye Highway (9 kilometers from the Moscow Beltway, KIZ "The Apple Archard”, 1)

These objects of real estate are managed by the firm “Estate Service”, the end owner of which happens to be the same Irish company “Parringrove Limited”. Moreover, the Irish firm is a member of the cooperative and owner of the mansions. According to a cunning scheme, the cooperative of the founders of "The Apple Orchard", rent these houses from "the Irish" with the purchase option in 35 years. It means, that the partners of Khodorkovsky rent the real estate objects from themselves. 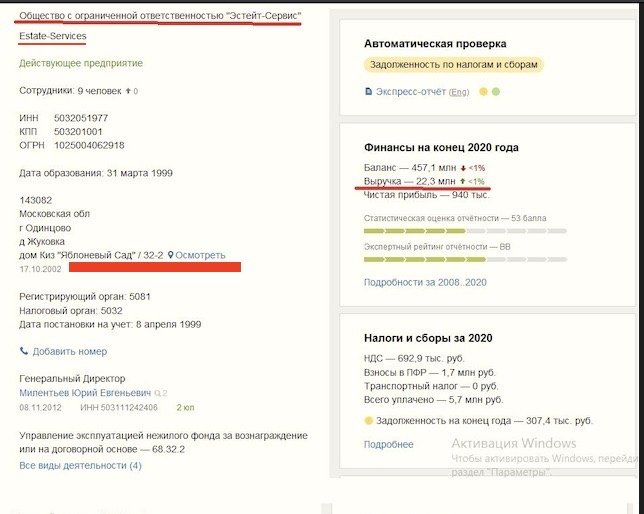 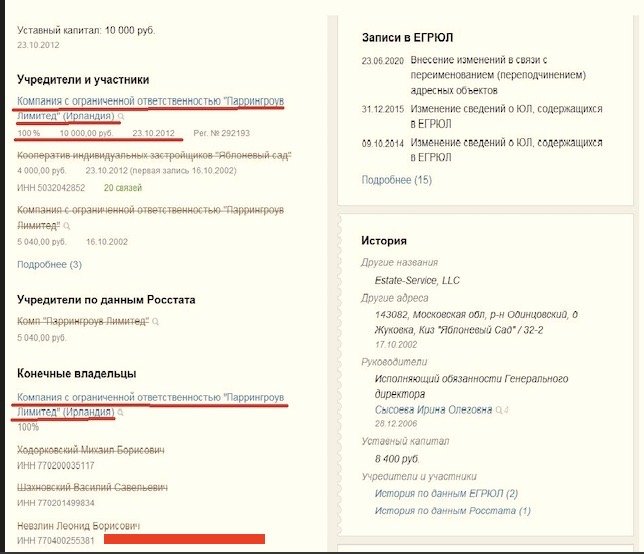 In the Russian registries of legal persons, there are no direct proofs that Khodorkovsky's henchmen continue to own "The Apple Orchard” and reap the cream of it. But now, the website Prigovoe.ru has found these proofs in the Irish registry of legal persons.

The firm “Parringrove Limited”, which is a co-founder of the Russian cooperative “The Apple Orchard” and owner of the mansions, simultaneously owns the management company “Estate Service” to which flow all profits from the lease. We found out that this managing company transfers, without fail, these incomes to its "parent" in Ireland.

We managed to obtain financial reports of the parent company “Parringrove Limited" for 2013, 2014, 2017, and 1018. They confirm that through "Parringrove” went millions of dollars of rent payments in favor of the swindlers, thieves, and the paymaster of serial murders from Yukos who are put on a wanted list. 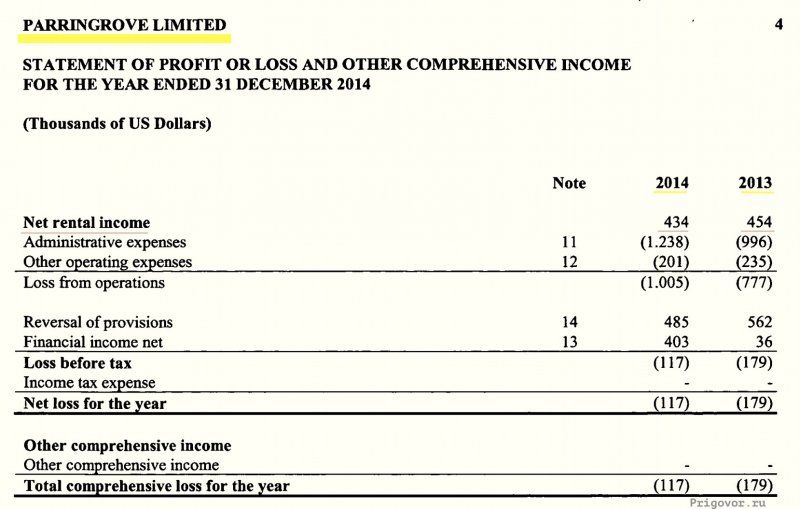 Extract from the annual report of "Parringrove Limited”, page 13. “Notes for the financial statements for the year ended 31 December 2018.

According to the financial reports, the leasing business of "Pattingrove” and its Russian affiliate "Estate-Service" is a rather stable enterprise. That is why an assumption may be put forward that annual profits of the Irish firm have been approximately the same. On average, "Parringrove" makes $437 thousand. If we multiply this sum by the number of years from the moment Mikhail Khodorkovsky got out of jail, then we get $3.5 million siphoned from the country under the guise of rent payments.

Yet, even here the partners of Khodorkovsky cannot resist some kind of confidence tricks. According to the report, "Service Estate" owed "Parringrove" 273.8 million rubles. In 2015 this sum was formalized as an investment in its Russian "affiliate", and, as of the day of the forming up the agreement, it amounted to $3.73 million (As a possibility – these millions could be directed at the functioning of "Open Russia”* the activity of which is recognized undesirable on the territory of the Russian Federation). 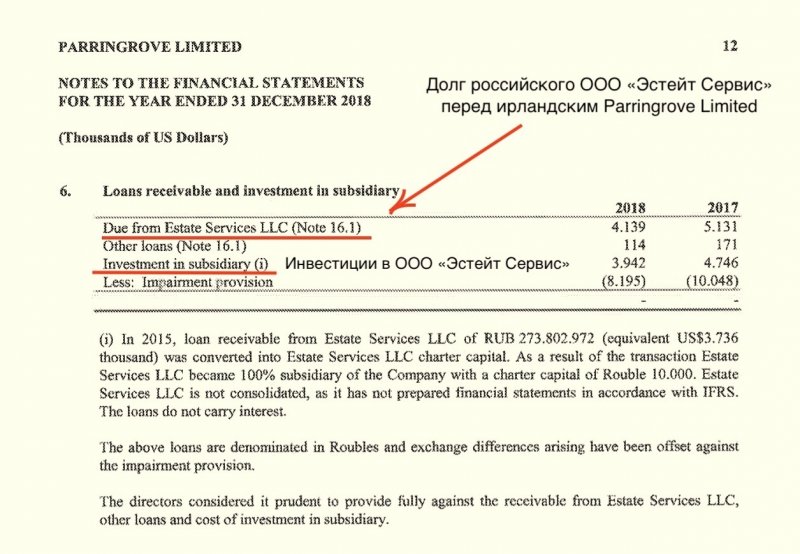 The debt that the managing JSC "Estate Service" owed to the offshore firm "Parringrove”. Usually, in such a case, they say “a pictures debt”.

FORNICATION SIN OF THE OWNERS AND SECRET CO-OWNERS

The documents received by the team of "Prigovor.ru", corroborate that the firm "Parringrove" is owned by the main shareholders of Yukos. According to the extract from the registry of the legal persons of Ireland, as of 2001, the founder of "Parringrove” is “Rysaffe Trustee Company”. “Resaffe" had been cooperating with the founders of Yukos and personally with Khodorkovsky for decades, providing them with secretarial, trust services as well as services for providing nominal directors.

(See also the articles «Grey schemes of “Open Russia» and “Yukos had hidden itself”. Rusaffe Trustee Company (c.I.) Ltd. In its turn, it manages stocks in the interest of seven trust structures”)

According to the annual report of “Parringrove Limited” for 2018, Rysaffe Trustee Company (C.I.) founded “Parringrove”  in the interest of eight trusts which are personally controlled by the former shareholders of Yukos. They are Auriga Trust, Aquarius Trust, Dolphin Trust, Draco Trust, Mensa Trust, Pictor Trust, Pisces Trust, Tucana Trust. 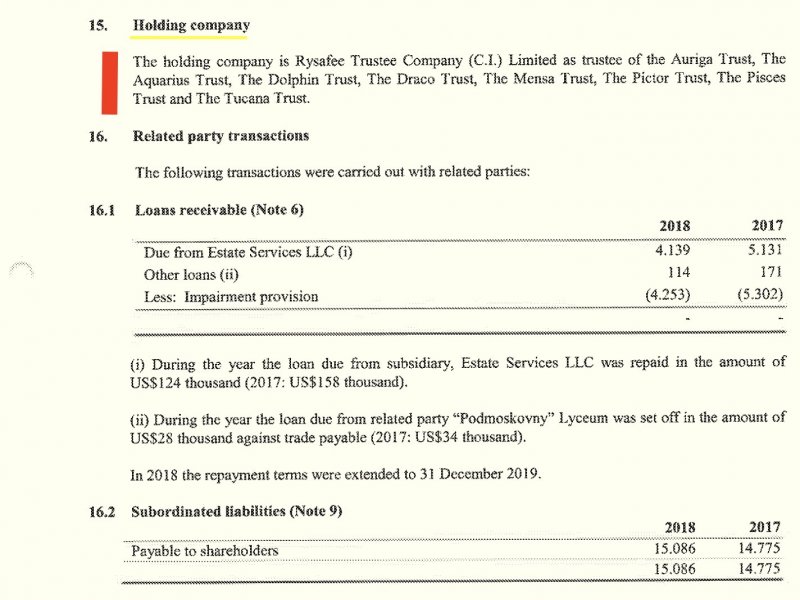 According to information from the Yukos shareholders themselves, which was presented for international arbitration courts, it is known that:

Auriga and Aqualius are under control of Mikhail Brudno;

Dolphin and Draco – under control of Vladimir Dubov;

Mensa – under control of Platon Lebedev;

Tucana – under control of Vassily Shalhnovsky:

Pictor – under control of Leonid Nevzlin

From this document, it becomes clear that the profits of “Parringrove” can manage Nevzlin, Brudno, Dubov, Lebedev, Shakhnovsky. And the beneficiary of Pisces trust, by the assumption of the website Prigovor.ru, is Mikhail Khodorkovsky.

Thus, the composition of the real owners-beneficiaries of the Irish company “Parringrpove Limited” duplicates the list of the founders of “The Apple Orchard”, including those who have debts in millions to the Russian Federation. 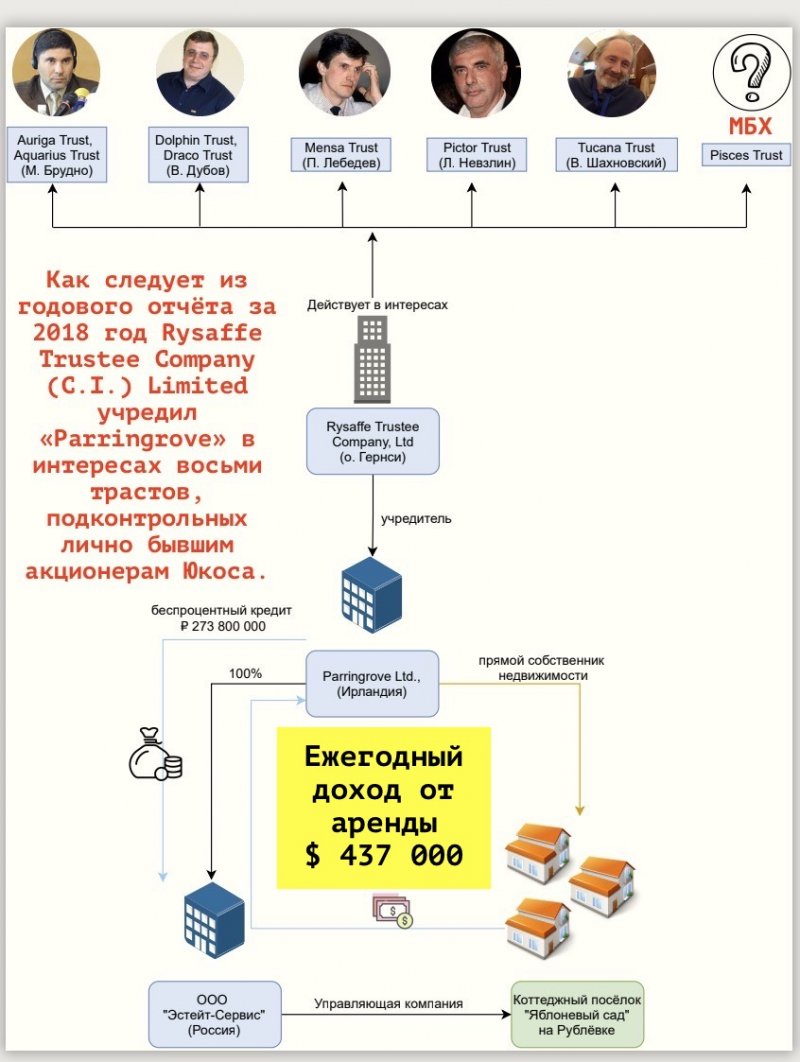 As of today, the mutual debt of Mikhail Khodorkovsky and Platon Lebedev to the budget of Russia on the old criminal case exceeds 18.6 billion rubles, or $246.8 million.

According to the estimation of the firm “Parringrove" itself, parcels of land, houses, and facilities in “The Apple Orchard” on Rublyovka, belonging to this Irish company, are worth $31.46 million. Apart from that, not least than $4.5 million – profits from the lease in the ten years perspective. 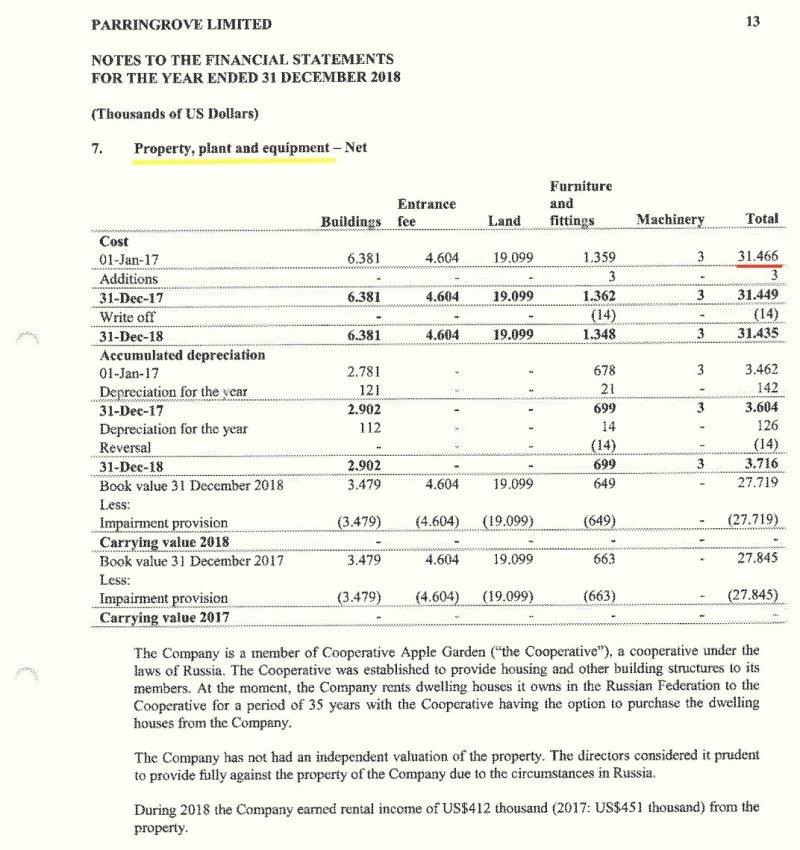 Extract from the annual report of “Parringrove Limited”, page 13 – “Notes for financial statements for the year ended 31 December 2018”

As the debt of Khodorkovsky and Lebedev on the criminal case is not yet settled, potentially, these assets could be converted to the federal budget revenue according to enforcement procedure, if The Federal Service of court bailiffs of the Russian Federation would, some day or other, wake up and recall a billion debts of the billionaires” notes the website Prigovor.ru.

Читать на Русском
Author: Aleksei Velarov
#дело юкоса#YUKOS case#YUKOS offshore schemes#офшорные схемы ЮКОСа #Brudno, Mikhail#Dubov, Vladimir#Lebedev, Platon#Nevzlin Leonid
Popular articles
Confessions of a Russian 'Robber Baron' Mega-merger creates country's new No. 1 oil firm led by billionaire tycoons
By David R. Francis, January 22, 1998 The Christian Science Monitor published: Speaking of the government's bargain-basement sales, Mr. Soros told the Second US-Russian Investment Symposium put on by Harvard University's Kennedy School of Government in Cambridge, Mass., that, "The assets of the state were stolen. It was quite repulsive. I didn't want to have anything to do with it."
Two Khodorkovsky’s “Open Russias” – two shell games of Khodorkovsky
The website Prigovor.ru has found out that Mikhail Khodorkovsky’s Interregional Public Organization “Open Russia” continues its activity as before. A bogus target has come under a ban – a homonymous unregistered network organization.
Paradise not lost for Khodorkovsky and Nevzlin
Prigovor.ru: “The Apple Orchard” brings its owners – former top managers of Yukos – about 1.5 million US dollars, and that money is used to finance the organization recognized as extremist in Russia
On this day “the neutral” Switzerland hid evidence of the Yukos criminal case
Switzerland should not hand over to Russia the bank documents on the Yukos case", so was the decision of a Swiss court directed against Russia. The website Prigovor.ru reminds its readers of what happened on August 23, 2007.