On this day, proofs were presented to swindlers from Yukos

“The guilt of Khodorkovsky M.B. and Lebedev P.L. of committing crimes is corroborated by evidence…” The website Prigovor.ru reminds its readers of what happened on April 23, 2009.

On this day 13 years ago, on April 23, 2009, in the Khamovnichesky District Court of Moscow, in accordance with the usual procedure, the state prosecution started to exhibit evidence on the second criminal case against two billionaires – the former head of the Oil Company Yukos Mikhail Khodorkovsky and the former head of the International Financial Association MFO “Menatep” Platon Lebedev. 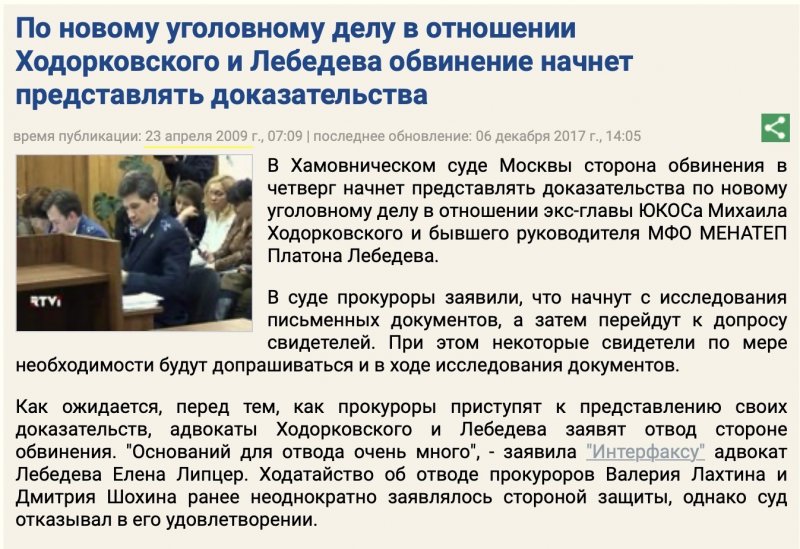 In connection with the massive size of the evidential base, consisting of financial and operational documents, business correspondence, bank statements, references, contracts, protocols and other materials necessary in economic criminal cases, the whole extent of the case on the preliminary stage consisted of 188 volumes.

(See also the article “On this day, a prison sentence was announced to Khodorkovsky for embezzlement and money laundering”).

FIRST EMBEZZLEMENT, THEN LEGALIZATION OF THE STOLEN MEANS

The defendant Platon Lebedev started to teach the court and the investigation how to handle matters. Obviously, at the behest of his lawyers, he expressed his discontent that the accusations of embezzlement and of laundering of illegally gained means were united in one case and were considered in one proceeding. Lebedev, once more at the behest of the defense, in fact, pulled inside out the order of the accusation, obviously, in order to say at least anything. The defendant argued that “it’s impossible to raise the question of legalizing some means until the verdict is not passed, confirming that these means were received illegally”. Although in the accusation it was clearly pointed out that, first, they had embezzled, and then legalized the illegally obtained. And it’s in that order that proceeded the inspection of the materials of the case and the proving of the guilt of the “borehole” barons.

THE LAWYERS “DEFENDED” THE OBVIOUS

In the fact that Lebedev, for some reason or other, decided to pull inside out, is visible a merit of the defense. Their clients were accused of “a shortfall of oil” about which nothing was said in the itemized actions imputed to Lebedev and Khodarkovaky, but that outraged the lawyers. And this time also the lawyer Yelena Lipzer tried to clear up “Lebedev’ position”

“We do not exclude that the representatives of the prosecution will present evidence by mixing all – misappropriation of stocks, embezzlement of oil, legalizing of both. Platon Leonidovich said, if everything was put in one and the same court, one should consider first the episodes under Article 160 (Embezzlement). And it there will be grounds, then pass to the consideration of legalization”, explained the layer. It even can be said that the lawyers “defended” such an order of the proceedings, all the more so, as the prosecution clearly was not going to present all materials “inside out”.

From the materials of the Khamovnichesky District Court of Moscow on the case of Khodorkovsky M.B. and Lebedev P.L.:

Pertaining to the fact of the committing by Khodorkovsky M.B. and Lebedev P.L. embezzlement of oil by way of misappropriation, as part of a criminal group, in the period of 1998-2003, their guilt is corroborated by the information that the defendants were taking an active part in creating the vertically integrated structure of the JSC Oil Company Yukos, imposing control of the activities of the company and of the distribution of its capital”.

“And one of the documents which was inspected in court, was the Resolution of the Government of the Russian Federation No 354 from 15.04.1993 signed by Viktor Chernomyrdin – the document on the creation by the state of the Oil Company Yukos. I.e., the position of Lebedev on the logic the prosecution was observed – they started to prove the crimes of the swindlers from Yukos with the creation of the Oil Company Yukos, that Khodorkovsky and Lebedev first plundered and then laundered criminal incomes”, noted the website Prigovor.ru.

(See also the previous article “On this day, operatives searched for traces of “borehole liquid”. “Taxes were paid in the amount equal to 35-50% of their real volume”. Thievish common fund of Khodorkovsky. The website Prigovor.ru reminds its readers of what happened on April 22, 2004).

Читать на Русском
#дело юкоса#YUKOS case#tax evasion YUKOS#уклонение от налогов ЮКОСа#схемы ЮКОСа#YUKOS schemes #Lebedev, Platon#Khodorkovsky Mikhail
Popular articles
Confessions of a Russian 'Robber Baron' Mega-merger creates country's new No. 1 oil firm led by billionaire tycoons
By David R. Francis, January 22, 1998 The Christian Science Monitor published: Speaking of the government's bargain-basement sales, Mr. Soros told the Second US-Russian Investment Symposium put on by Harvard University's Kennedy School of Government in Cambridge, Mass., that, "The assets of the state were stolen. It was quite repulsive. I didn't want to have anything to do with it."
Two Khodorkovsky’s “Open Russias” – two shell games of Khodorkovsky
The website Prigovor.ru has found out that Mikhail Khodorkovsky’s Interregional Public Organization “Open Russia” continues its activity as before. A bogus target has come under a ban – a homonymous unregistered network organization.
Paradise not lost for Khodorkovsky and Nevzlin
Prigovor.ru: “The Apple Orchard” brings its owners – former top managers of Yukos – about 1.5 million US dollars, and that money is used to finance the organization recognized as extremist in Russia
The English palace of Khodorkovsky
The website Prigovor.ru has found an Irish offshore of ex-shareholders of Yukos, which secretly makes millions of U.S. dollars in Russia. Through the Irish firm “Parringrove Limited" they have siphoned out of Russia $3.5 million of profits from leasing mansions in the community Zhukovka.