On this day, in Spain «The White Whale» exposed Yukos

“Khodorkovsky, Lebedev, Nevzlin, Brudno, and Dubov tried to hide their connection to the bank “Menatep”. Illegal siphoning off money to Spain. The website Prigovor.ru reminds its readers of what happened on March 12, 2005.

On this day 17 years ago, on March 12, 2005, it became known that the Spanish police had carried out a series of raids within the framework of the operation “The White Whale”. The main purpose for the Spanish authorities was to counter dubious financial operations in their country. Among the apprehended on the wide-scale case of money laundering in Marbella (province Malaga), were citizens of Russia and Ukraine, as well as Spain, France, Morocco and Finland.

In parallel to the police raid in Spain, searches were made in Holland – because of the probable connection with the money laundering the “main shareholders” of the Oil Company Yukos.

“We could not even define a possible destination of a considerable part of the money, coming as the result of a large-scale pumping of money from the Russian company Yukos”, and, obviously, redirected to a Holland company for further investment in a Spanish subsidiary”, was pointed out in a message of the Spanish Ministry of the Interior.

“A YUKOS EMPLOYEE WAS INVOLVED IN THAT”

“The pecuniary means of Yukos, most likely, were laundered in Spain. They were invested in real estate on the coast Costa del Sol”, said Valentine Baut, head of the police anti-narcotics and anti-organized crime Department of the district Costa del Sol who also headed the investigation brigade working on the case of money laundering. “According to the data at our disposal, an employee of Yukos was involved in that. His name is not disclosed in the interest of the investigation”.

(“See also the article “Yukos managers are suspected of involvement in money laundering in Spain”.)

For reference. The police operation in Spain under the code name “The White Whale”, had been carried out with participation of 300 policemen during ten months. The reason for it was operative information that some big foreign criminal organizations had been laundering money in Marbella on an especially large scale. On the whole, according to the police preliminary data, “dirty money” had been laundered to the total amount of 250 million euros. Parallel to this, a request for legal aid was directed to Spain – the investigative group, working on “Yukos case”, was studying a great volume of information fallen into the hands of the law enforcement agencies.

“We have established that Khodorkovsky, Lebedev, Nevzlin, Brudno, and Dubov tried to hide their involvement in the bank “Menatep”, was said in the request. Of interest, among other things, was the firm “Velvetstar Trading Inc”.

“DID NOT DO ANY LEGAL BUSINESS”

Representatives of Yukos, as usual, “categorically denied” any involvement of the oil company in money laundering in Spain. “This is nonsense. It only remains to try to find on Mars – perhaps, we have laundered there something”, said the press-secretary of the company Alexander Shadrin. But Steven Michael Theede, representing the Board of Director, didn’t repeat the “Martian nonsense” of the press-service. In a businesslike manner, he addressed the Minister of the Interior of Spain with a proposal of cooperation with investigation agencies. Theede sent a letter to the Ministry, yet it contained a telling reservation.

“Never ever, neither Yukos, nor its subsidiaries and affiliated with it companies have done any illegal business Spain or have had any bank accounts in your country”, reported the news agency Reuters citing the letter of Steven Theede.

In this letter, it was pointed out that Yukos and its management were ready to cooperate in full scale with the Spanish law enforcement agencies that exposed an international chain of money laundering”, wrote the newspaper “KP”.

And, naturally, another interpretation of the theme appeared. “Yukos may have come a victim of an international criminal clan. About this reported the agency Reuters with reference to sources close to the investigation. According to them, someone from the company might have transferred outside the country big sums of money without knowledge both the leadership of the company and tax agencies”, argued the TV channel NTV. 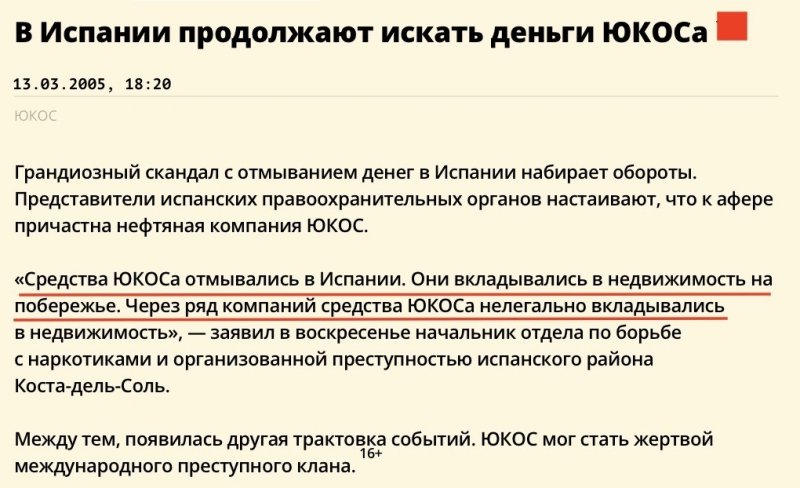 “A MAN BY THE NAME NEVZLIN”

A bit later, in an article published in the German magazine “Focus” in March 2005, it was reported about the essence of the Spanish operation “The White Whale” and about its main person – a Chilean lawyer by the name Fernando del Valle, nephew of the former minister of justice under Pinochet (some Russian publications thought that it was a name of the firm and put quotes around).

This lawyer was regarded as a big fish in the largest case of money laundering in Europe. According to the publication, del Valle “provided help not only to nine criminal organizations, but also to one person, whose name is well known, particularly in Russia – Leonid Nevzlin”.

“See also the article “On this day, the Spanish “White Whale” swam past Yukos”).

The Spanish police, it has to be said, made the results of its operation up to court. The version of Yukos involvement was excluded from the case, and the episode itself was “put on hold”. It was withdrawn from the overall case, and, reportedly, classified. Russian press joyfully reported that “the Spanish court has exonerated Khodorkovsky” and has hot found Yukos money in the laundry.

Nevertheless, one of the police reports, that was received and unexpectedly “scraped” in Spain, was included in the materials of “the second case” of Mikhail Khodorkovsky and Platon Lebedev.

Among other documents – accounts, account statements, bank statements of money movements, summary tables of payments to physical and legal persons – were mentioned “the documents received from Spanish prosecution agencies as the result of the fulfilment of the request on providing of legal support”.

From this description, one can see the logic and the standards (patterns) which employees of the Spanish Ministry of the Interior followed while preparing the materials. 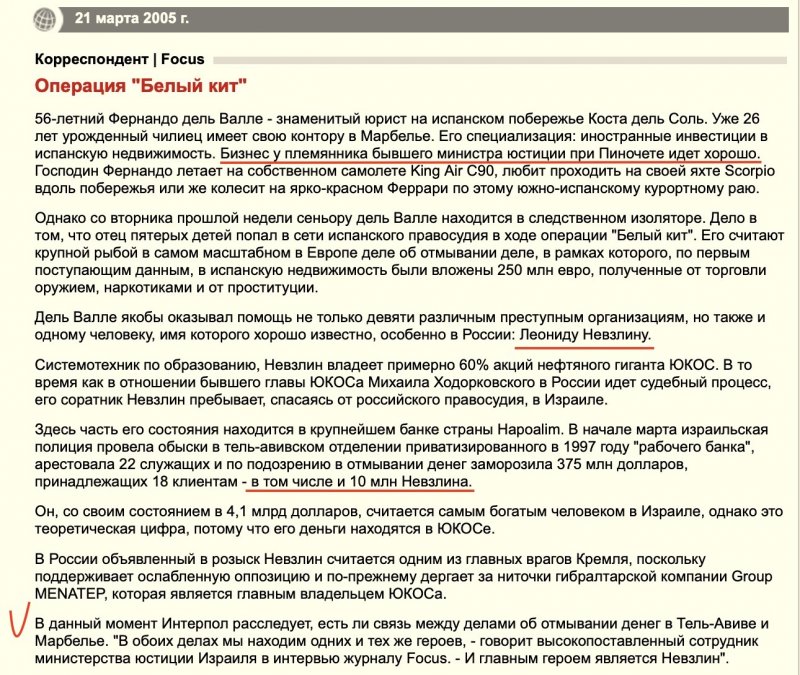 “THERE ARE SUFFICIENT QUANTITY OF DUBIOUS OPERATIONS”

«It is pointed out in the police report that, 25.07.2003, in Spain were transferred 619 417.30 U.S. dollars on the account of the company “Velvetstar Trading Inc” from Cyprus from the account of the company “Whitefield Invest Limited”. Later, 07.08.2003, 512 217 U.S. dollars were transferred to the name of Jean Luis Mallarde, born in Switzerland, to his account in the bank “Atlantico”. Jean Luis was in contact with a number of companies dealing with real estate in the region Costa del sol.

From the superficial analysis of this account follows that there are sufficient number of suspicious operations connected with money laundering. First of all, in these operations take part entities created in countries that, traditionally, are used for money laundering (Panama, The British Virgin Islands) and have accounts with addresses of sender/receiver, the bank status of which helps to keep them secret (Switzerland, Cyprus, Lichtenstein, Gibraltar, Hungary).

Second, as a rule, on account is mentioned an operation of receiving international transactions and an order for its transferring to other countries. Third, sums of the transactions are rather considerable and they don’t correspond to any business activity. During three and a half years, on this account have been transferred about 68 million euros and have been charged 63 million euros.

“The connection of the firm “Whitefield Invest Limited”, mentioned in the report of the Spanish Ministry of the Interior, with the oil empire of Khodorkovsky was evident from the documents what the investigation had withdrawn during the search in the law firm “ALM-Feldmans”, notes the website Prigovor.ru.

(See also the previous article “On this day, exposers of “Menatep” case out in Switzerland. Andrei Strebel: “I don’t like that Switzerland is the territory where your thieves hide their money”. The website Prigovor.ru reminds its readers of what happened on March 11, 2004.

Читать на Русском
#дело юкоса#YUKOS case#офшоры ЮКОСа#tax evasion YUKOS#YUKOS offshore#уклонение от налогов ЮКОСа#Spanish YUKOs Schemes#Испанские схемы ЮКОСа #Nevzlin Leonid
Popular articles
Two Khodorkovsky’s “Open Russias” – two shell games of Khodorkovsky
The website Prigovor.ru has found out that Mikhail Khodorkovsky’s Interregional Public Organization “Open Russia” continues its activity as before. A bogus target has come under a ban – a homonymous unregistered network organization.
Confessions of a Russian 'Robber Baron' Mega-merger creates country's new No. 1 oil firm led by billionaire tycoons
By David R. Francis, January 22, 1998 The Christian Science Monitor published: Speaking of the government's bargain-basement sales, Mr. Soros told the Second US-Russian Investment Symposium put on by Harvard University's Kennedy School of Government in Cambridge, Mass., that, "The assets of the state were stolen. It was quite repulsive. I didn't want to have anything to do with it."
Paradise not lost for Khodorkovsky and Nevzlin
Prigovor.ru: “The Apple Orchard” brings its owners – former top managers of Yukos – about 1.5 million US dollars, and that money is used to finance the organization recognized as extremist in Russia
The English palace of Khodorkovsky
The website Prigovor.ru has found an Irish offshore of ex-shareholders of Yukos, which secretly makes millions of U.S. dollars in Russia. Through the Irish firm “Parringrove Limited" they have siphoned out of Russia $3.5 million of profits from leasing mansions in the community Zhukovka.