On this day Yukos was put on notice of tax machinations

99 billion rubles of arrears. “Intentional actions of the Oil Company Yukos on artificial drawing up of turnovers with oil and oil products through shell firms. The website Prigovor.ru reminds its readers of what happened on April 17, 2004.

On this day 18 years ago, on April 17, 2004, the Ministry on Taxes and Levies of Russia came out with the explanation of its actions on the results of the on field tax audit of the Oil Company Yukos. As the result of this inspection of April 14, 2004, the Tax Service made a decision to charge addition tax liabilities to the Oil Company Yukos for 2000 to the amount of 99.3 billion rubles.

“In the decision taken by the Tax Service, are reflected the intentional actions of the oil company Yukos on artificial drawing up turnovers with oil and oil products through specially created entities, registered in Russian regions and towns that improperly provide additional tax benefits”, pointed out the statement of the Ministry of Taxes and Levies of Russia. According to specialists of the Ministry, Yukos has created and registered its entities in the Republics of Mordovia, Evenkia, and Kalmykia, as well in Closed Administrative Territorial Units (ZATO) in Chelyabinsk, Sverdlovsk and Nizhniy Novgorod Regions.

(See also the article Beneficial locus from Yukos. Six shell firms under the supervision of Dubov and “bloody senator” Nevzlin). 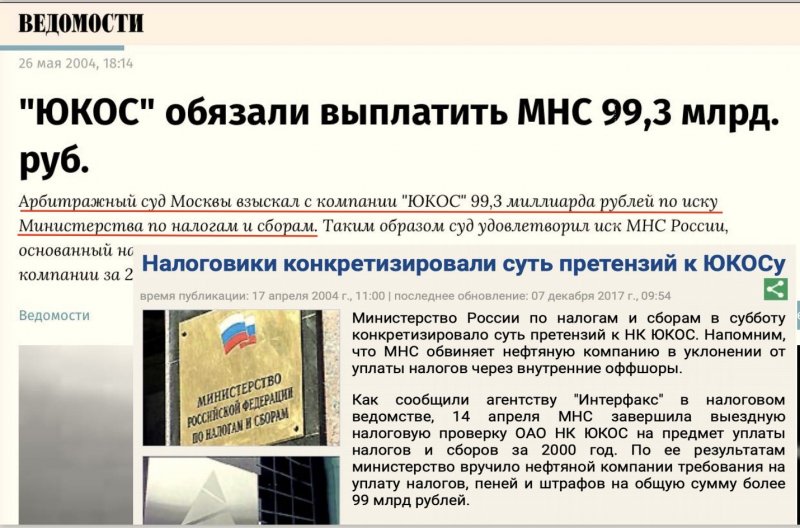 On the eve, the Arbitration Court arrested the assets of the oil company Yukos. Until filing of court’s decision, a ban was imposed on the company forbidding it “to alienate, weight down in any way the property belonging to it (including prohibition to transfer securities to a nominal holder or to trust management), stakes in equity capitals of other legal persons, with the exception of basic products of the Oil Company Yukos. It means that these injunctive measures did not impinge upon the production activity of the company. According to a representative of the Ministry on Taxes and Levies, the injunctive measures were taken in connection with the absence on operating accounts of the oil company means necessary to pay tax arrears, as well as to avoid siphoning out assets, which would make impossible a real collection of taxes, penalties and fines in case of fulfillment of the demand of the Ministry of Taxes and Levies of the Russian Federation.

Yukos reacted very oversensitively, arguing that “the arrest of the property of the company is “a disproportionate security for the demands of the Ministry”. According to Yukos press secretary Alexander Shadrin, the company would file a complaint with the European Court of Human Rights (ECtHR) in Strasbourg. In fact, such a complaint was files on April 23, 2004. However, this complaint did not affect neither the operative management, nor the situation around the company. Strasbourg evidently was in no hurry, and it admitted the complaint partially acceptable only on January 29, 2009.

(See also the article “On this day, Yukos was brought back to tax reality”).

On the episodes of the tax inspection for 2000, the proceedings in court of the first instance and in appellate courts, the ECtHR, finally, found a violation – the Court held that there had been not sufficient time for Yukos to prepare its position in the hearings.

(See also the article “On this day, "tax skeletons" dropped out of the Yukos closets”).

However, this violation did not touch other episodes of the tax inspections, thanks to which was found the whole sum of Yukos tax arrears to the amount of about $25.79 billions, and the reason of it had been large scale and systematic machinations flourishing in the company at the behest of the swindler Mikhail Khodorkovsky”, notes the website Prigovor.ru.

(See also the previous article “On this day, Wester dealers were worried about Lebedev’s stake”. The tactic of the anti-mafia law “RICO Act” against swindlers from Yukos. Strasbourg does not change anything. The website prigovor.ru reminds its readers of what happened on April 16, 2004).

Читать на Русском
#дело юкоса#YUKOS case#tax evasion YUKOS#уклонение от налогов ЮКОСа#схемы ЮКОСа#YUKOS schemes#методы ЮКОСа#YUKOS methods #Nevzlin Leonid
Popular articles
Confessions of a Russian 'Robber Baron' Mega-merger creates country's new No. 1 oil firm led by billionaire tycoons
By David R. Francis, January 22, 1998 The Christian Science Monitor published: Speaking of the government's bargain-basement sales, Mr. Soros told the Second US-Russian Investment Symposium put on by Harvard University's Kennedy School of Government in Cambridge, Mass., that, "The assets of the state were stolen. It was quite repulsive. I didn't want to have anything to do with it."
Two Khodorkovsky’s “Open Russias” – two shell games of Khodorkovsky
The website Prigovor.ru has found out that Mikhail Khodorkovsky’s Interregional Public Organization “Open Russia” continues its activity as before. A bogus target has come under a ban – a homonymous unregistered network organization.
Paradise not lost for Khodorkovsky and Nevzlin
Prigovor.ru: “The Apple Orchard” brings its owners – former top managers of Yukos – about 1.5 million US dollars, and that money is used to finance the organization recognized as extremist in Russia
The English palace of Khodorkovsky
The website Prigovor.ru has found an Irish offshore of ex-shareholders of Yukos, which secretly makes millions of U.S. dollars in Russia. Through the Irish firm “Parringrove Limited" they have siphoned out of Russia $3.5 million of profits from leasing mansions in the community Zhukovka.