On this day, a court in the United States found out about kleptocrats and bribes of Yukos

The amount of a bribe reached $2 billion. “For the purpose of bribery, Khodorkovsky concluded a verbal agreement with state officials”… The website Prigovor.ru reminds its readers of what happened on June 8, 2016.

On this day 6 years ago, on June 8, 2016, it became known that during legal proceedings in an American court in District Columbia where the case was being heard Russia vs. “major’ shareholders of the oil company Yukos, documental proofs about bribes were delivered. The company of Khodorkovsky* “fed” state officials in exchange for “right” decisions in the course of the privatization of the oil company NK Yukos.

Lawyers found out that “major” shareholders of Yukos had privatized the company by means of a fraudulent scheme, and, in addition, the amount of a bribe had reach $2 billions. According to the presented documents, swindlers from Yukos had funneled illegal payments directly through one of the claimants of the lawsuit (against Russia) – through the firm “Yukos Universal Limited”. The purpose of this was to give bribes to officials of the government who, from the outset, had helped the oligarchs to acquire Yukos shares during 1995-1996.

In these documents”, reported the newspaper RBK, “were mentioned names of those who had received dubious bonuses from Yukos. In particular, Sergey Muravlenko, Yuri Golubev, Viktor Kazakov, and Viktor Ivanenko. All of them had been appointed on behalf of the state to different managing positions in this oil consortium even before the start of the privatization. Then, in 1995-1996, from the part of Khodorkovsky, a verbal promise was given to them – it they would use their powers to guarantee the transfer of the company into certain hands, then their “material interests would be taken into account”. Soon, this verbal agreement was sealed by documents. 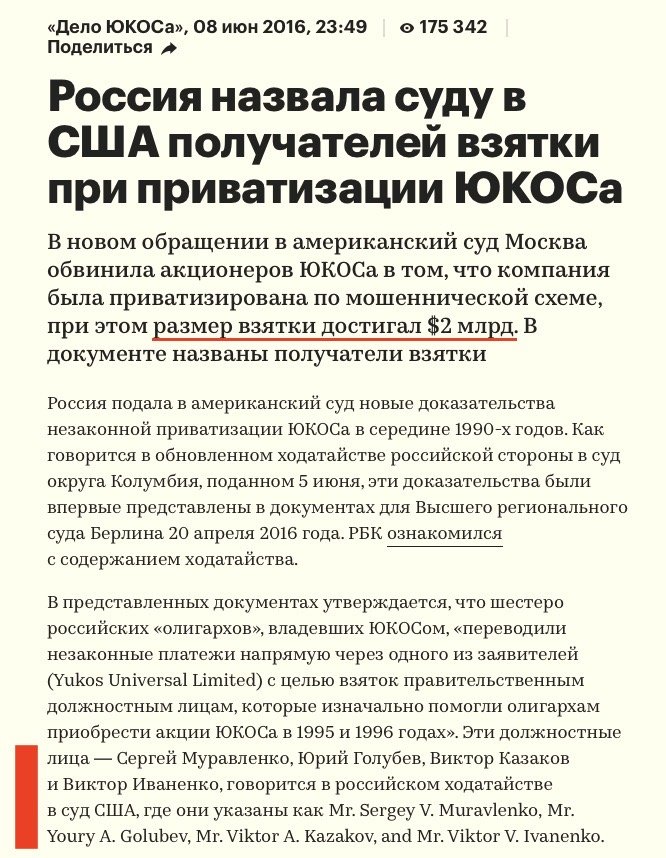 “With the purpose of bribery, Khodorkovsky, acting in concert with other members of an organized group, concluded in 1996 a verbal agreement with persons representing the former highest management of the OJSC Yukos: namely, with president of the Director’s Board Muravlenko S.V., first vice-presidents Kazakov V.A. and Ivanenko V.V., adviser of the Board, main expert Golubev Y.A. Later, on the basis of the main agreement from 1996, a new agreement was concluded on March 26, 2002, and then, on November 1, 2002, a modified and revised “compensation agreement” was reached according to which the company “Group Menatep Limited” in the person of  “Yukos Universal Limited” would pay to the company “Tempo Finance Limited” (it’s beneficiaries are Ivanenko, Muravlenko, Kazakov and Golubev) a sum of money to the amount of 15% of monetary assets received through the selling of the shares of the OJSC Oil Company NK Yukos.

From the company “Group Menatep Limited” the agreement was signed by its director Lebedev P.L., from “Tempo Finance Limited” – Golubev Y.A., from the beneficiaries – Ivanenko, Muravlenko, Kazakov, Golubev.

On the basis of the agreement from 26.03.2002, “Group Menatep Limited” in the person of “Yukos Universal Limited”, during the period from 25.10.200 to 31.05.2003, shares of the OJSC Yukos were being sold, and recompense was being transferred to “Tempo Finance Limited” for the beneficiaries”.

According to the investigation, the money was paid “to guarantee taking illegal and unfounded decisions by general meetings of shareholders’ and members of boards of directors of the OJSC “NK Yukos”, OJSC “Yuganskneftegaz” and the OJSC “Tomskneft VNK”. These were “bonuses” not only for actions but also for inaction with regard to challenging dubious decisions taken under orders of Khodorkovsky’s organized criminal group.

Outside Russia, corruption tricks of Khodorkovsky were not so well-known, so the appearance of these facts in foreign courts – first in the process of the Supreme Regional Court of Berlin and then in the United States – became a sensation sui generis.

In Russia, all these details were itemized in Khodorkovsky’s second criminal case on charges of oil embezzlement and laundering assets acquired by illegal means. The recipients of shady bonuses had to give testimony as witnesses. First of all, they confirmed the verbal agreement, and then the written one.

(From the testimony of the witness Ivanenko V.V. former vice-president of the OJSC Yukos)

“In 1996, Mr. Khodorkovsky M.B. conducted negotiations with the leaders of the OJSC Yukos Muravlenko S.V., Kazakov V.A., Golubev Y.A., including with him, and Khodorkovsky demanded that they would not interfere in the activity of his team pertaining to management of the company. Talks with Khodorkovsky M.B. on this matter took place several times in presence of Nevzlin L.B. and Lebedev P.L. In was proposed to him, as well as to Golubev Y.A., Muravlenko S.V., Kazakov V.A. to become beneficiaries, i.e. to receive monetary means from 30% of company’s price. The figure 30% emerged as a result of the talks. The agreement was verbal, and was made on the pledge of the word of Khodorkovsky. The recompence in the form of the price of selling 30% of shares was proposed to them for establishment of the company and creating conditions for friendly takeover of Yukos by the group “Menatep” under the guidance of Khodorkovsky. From the group consisting of himself, Muravlenko S.V. and Kazakov V.A., as negotiator with Khodorkovsky M.B. was chosen Golubev Y.A. who represented their interests. Following their commitments, they didn’t interfere in the management of the company, and in 1998 quitted the job”.

Apart from that, the witness admitted the fact of payments in accordance with fictitious agreements on providing “consulting services”, and, by doing so, actually, confirmed that the agreements were fictitious. In the words of the witness, “in the period from 1998, after quitting the job in the OJSC NK Yukos, until 2005, he had had been receiving pecuniary means from the company “Tisbury Limited” and “Leiliham Limited” under the contracts of providing consulting services. These companies were used to make payments to him in accordance with the agreement concluded with Khodorkovsky in 1996”.

In the materials of the second criminal case against Khodorkovsky and Lebedev, there are not only these documents, but also notices of the receipt of money. All this stack of evidence was withdrawn by investigators during the searches of premises in Zhukovka neighborhood. So, lawyers non accidentally created wild scandals with regard to the investigative actions in the suburban residence of the oil company, crying about “arbitrary actions” – they simple knew that the documents stored there, could sink the whole Yukos.

AUDITOR CAME TO A CONCLUSION

And so it happened – all described above was being hidden by Yukos leadership not only from the shareholders, but also from auditors of the company PricewaterhouseCoopers that dealt with the corporate reporting of the oil company Yukos. According to the evidence, which was given during the preliminary investigation by a representative of PricewaterhouseCoopers Douglas Robert Miller, apart from hiding information from auditors and other “tricks” which auditors usually refer to “substantive information”, there were, according to him, also interesting things relating to “compensation payments”. These payments Khodorkovsky and Lebedev refused to substantiate in every possible way, although such information is necessary for inclusion in auditors’ reports.

The auditor Miller said that he had not received from the “major shareholders” reasonable explanations of serious financial expenses, and, based on his experience, he, unassisted, had come to the conclusion that this money had been paid for considerable help provided to Khodorkovsky in establishing an actual control over the company, or for a serious help to Khodorkovsky’s group during the privatization of Yukos. As it turned out, both conclusions of the auditor were right.

(See also the article “On this day, the lawyers of Yukos launched a senseless attack on auditors from PwC“).

“At one of the conference, where this question was discussed, was present personally Khodorkovsky M.B., and he asked Khodorkovsky M.B. about possible changes of the reasons of the compensation agreement, but Khodorkovsky, in response to that said: if he said that it’s the beneficiaries who are receiving this money, he would end in jail”, pointed out the auditor in his testimony.

“In other words, the swindler Khodorkovsky was well aware that he had acted illegally, while pretending to be a righteous person. Yet he was not afraid of criminal responsibility in Russia counting himself untouchable. But he was really afraid of prosecution from the part of the American law enforcement machine. Being aware that it would be difficult for him to hide in the Unites States dirty episodes in the activities of the “most transparent” oil company, he stopped the project “Voyage”, which was meant to increase Yukos international reputation and to guarantee new flows of money from selling shares on the New York Stock Exchange. Yet “transparency” turned out to be fiction, and Khodorkovsky turned out to be a swindler”, notes the website Prigovor.ru.

(See also the previous article “On this day, it was decided that Yukos and “Menatep” are one bone one flesh”. Once upon a time, Lebedev and Khodorkovsky were putting up a swindle… Court accepted a motion of lawyers to unite two criminal cases. The website Prigovor.ru reminds its readers of what happened on June 7, 2004).

Читать на Русском
#США#дело юкоса#YUKOS case#офшоры ЮКОСа#схемы ЮКОСа#YUKOS schemes#YUKOS offshores#USA #Khodorkovsky Mikhail #Golubev, Iurii Alexanderovich#Mooreavlenko, Sergey
Popular articles
Two Khodorkovsky’s “Open Russias” – two shell games of Khodorkovsky
The website Prigovor.ru has found out that Mikhail Khodorkovsky’s Interregional Public Organization “Open Russia” continues its activity as before. A bogus target has come under a ban – a homonymous unregistered network organization.
Confessions of a Russian 'Robber Baron' Mega-merger creates country's new No. 1 oil firm led by billionaire tycoons
By David R. Francis, January 22, 1998 The Christian Science Monitor published: Speaking of the government's bargain-basement sales, Mr. Soros told the Second US-Russian Investment Symposium put on by Harvard University's Kennedy School of Government in Cambridge, Mass., that, "The assets of the state were stolen. It was quite repulsive. I didn't want to have anything to do with it."
Paradise not lost for Khodorkovsky and Nevzlin
Prigovor.ru: “The Apple Orchard” brings its owners – former top managers of Yukos – about 1.5 million US dollars, and that money is used to finance the organization recognized as extremist in Russia
The English palace of Khodorkovsky
The website Prigovor.ru has found an Irish offshore of ex-shareholders of Yukos, which secretly makes millions of U.S. dollars in Russia. Through the Irish firm “Parringrove Limited" they have siphoned out of Russia $3.5 million of profits from leasing mansions in the community Zhukovka.