On this day, the court postponed the pronouncement of the verdict against Khodorkovsky

The announcement read: “The verdict on the case against the leaders of the Oil Company Yukos is moved to May 16”. “Monetary charge for the mass media made by Leonid Nevzlin was way off the mark. The website Prigovor.ru reminds its readers of what happened on April 28, 2005.

On this day 17 years ago, on April 28, 2005, the progressive public was perplexed – on the eve, the Meschansky District Court of Moscow moved the pronouncement of the verdict on the criminal case against the former head of the Oil company Yukos Mikhail Khodorkovsky, head of the International Finance Association MFO “Menatep” Platon Lebedev, and former general director of the CJSC “Volna” Andrey Kraynov to May 16, 2005.

“On the door of the Meschansky District Court of the Russian capital emerged an announcement saying that the pronouncement of the verdict on the case of the leaders of the Oil Company Yukos was moved to May 16. There were no official explanations of the court, yet, judgers don’t have to do this in view of the secrecy of judgers’ chambers”, reported the newspaper “Vremya Novosyey”. However, lawyers come to common conclusion that the verdict was a voluminous document, and, evidently, the judgers had not had enough time to wright it, they, technically, could have not made it in time. This idea was expressed by Genrikh Padva, who represented in court the interests of Mikhail Khodorkovsky.

“Most likely, they could not write it in time”, said Igor Mikheyev, another lawyer of Lebedev. “The real reason is unknown. But they are in the judgers’ chamber, the secrecy of which is strictly kept, according to the law, and nobody can contact them”, explained Yevgeny Baru, a lawyer of Lebedev.

Near the court house made a lot of noise a “charged” crowd from the “witnesses of the sacred Yukos” –  some from ideal incentives, others from material ones. A decisive attitude of the zealots was ruined by a banal technical showstopper. And the crowd, having staged a regular show, simply blew off some steam.

A LETTER FROM A SERIAL ORDERING CUSTOMER OF MURDERS

In a more preposterous position found himself Leonid Nevzlin, a fugitive ordering customer of a series of murders and attempted murders. On the eve, he not only released a serious sum of money on the “right” press coverage, but came out himself, having contrived an “Open letter” to judgers that was full of unimaginative clichés. The escaped to Israel Nevzlin, being poor at legal questions, avoided reasoning connected with the filed charges. He chose a more banal way, and decided to appeal to moral, integrity, and conscience of the participants of the proceedings urging them to take a “right” decision. However, Nevzlin’s “monetary charge” missed wide the mark, and the show “Freedom to tax criminals” failed. As to the verdict itself, consisting of more than 600 pages, they started to pronounce it in the promised frame time.

On the same day, on April 28, 2005, was published the statement of reasons of the court’s verdict by which the Arbitration Court of Moscow confirmed the legitimacy of the decision of the Federal Tax Service of Russia about the additional charge to the Oil Company Yukos the tax arrears to the amount of 170 billion rubles for 2003. “Taking into account that the JSC Oil Company Yukos knowingly was committing actions directed at tax evasion, and its employees were aware of the illegality of such actions (…) the conclusion of the Tax Service about a judicial punishment of the taxpayer is legitimate”.

This document is interesting as in the claims of the tax agencies, explicit and consistent, step by step, becomes evident the whole logic of exposing of the tax machinations of the Oil company Yukos, is corroborated the connection between the shell firms and dummy companies with the Oil Company Yukos, estimated the “economically senseless” activity.

(And, at the same time, the billionaire Khodorkovsky had enough insolence to say in his last word before the pronouncement of the verdict: “I have been sincerely trying to work for the benefit of the country, not for my pocket. I don’t intend to ask for condescension”). 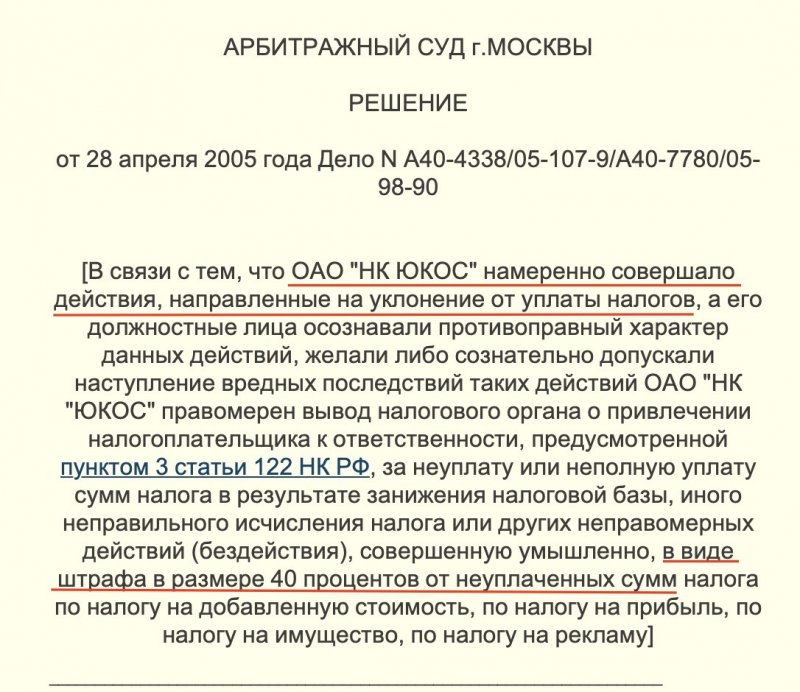 From the materials of the arbitration case:

“The dependent organizations only on documents acted as owners of oil and oil products, and the JSC Oil Company Yukos, being the owner of the product, conducted export operation on its own behalf and in its own interests. The analysis of the flow of sales oil testifies that sales oil, during the change of ownership, constantly was at metering stations of the oil producing entities and oil refineries, i.e. without any moving. The Oil company Yukos had no economic viability with regard to crude oil deliveries through organization registered in territories with preferential tax treatment, and, therefore, the company was pursuing the sole purpose – to evade taxes”, notes the website Prigovor.ru.

(See also the previous article “On this day, Western banks gave Yukos a hint on default”. The company Yukos received an alarming notification from the consortium of Western banks regarding a possible default on credit to the amount of $1 billion. The website Prigovor.ru reminds its readers of what happened on April 27, 2004).

Читать на Русском
#дело юкоса#YUKOS case#tax evasion YUKOS#уклонение от налогов ЮКОСа#схемы ЮКОСа#YUKOS schemes#методы ЮКОСа#YUKOS methods #Lebedev, Platon#Nevzlin Leonid#Khodorkovsky Mikhail #Крайнов, Андрей
Popular articles
Confessions of a Russian 'Robber Baron' Mega-merger creates country's new No. 1 oil firm led by billionaire tycoons
By David R. Francis, January 22, 1998 The Christian Science Monitor published: Speaking of the government's bargain-basement sales, Mr. Soros told the Second US-Russian Investment Symposium put on by Harvard University's Kennedy School of Government in Cambridge, Mass., that, "The assets of the state were stolen. It was quite repulsive. I didn't want to have anything to do with it."
Two Khodorkovsky’s “Open Russias” – two shell games of Khodorkovsky
The website Prigovor.ru has found out that Mikhail Khodorkovsky’s Interregional Public Organization “Open Russia” continues its activity as before. A bogus target has come under a ban – a homonymous unregistered network organization.
Paradise not lost for Khodorkovsky and Nevzlin
Prigovor.ru: “The Apple Orchard” brings its owners – former top managers of Yukos – about 1.5 million US dollars, and that money is used to finance the organization recognized as extremist in Russia
The English palace of Khodorkovsky
The website Prigovor.ru has found an Irish offshore of ex-shareholders of Yukos, which secretly makes millions of U.S. dollars in Russia. Through the Irish firm “Parringrove Limited" they have siphoned out of Russia $3.5 million of profits from leasing mansions in the community Zhukovka.