On this day, Khodorkovsky's henchmen were adjudged guilty of stealing $13 billion

As it was established during the investigation, “the defendants, being part of an organized group, through firms under Yukos control, acting as fictitious owners, had been buying raw oil at artificially lowered prices and then selling it at overcharged prices”. It was pointed out that the price was 3.5 higher than the real one.

According to the investigation, the total sum of the stolen money amounted to 13 billion dollars, 8.5 billion of which were legalized. 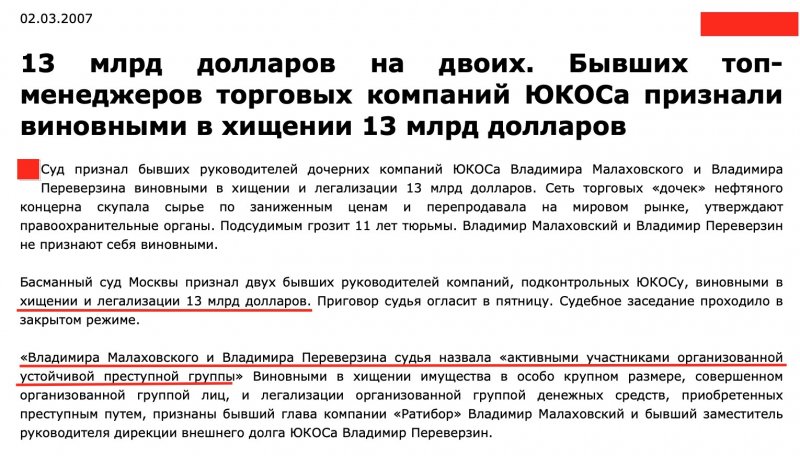 This "market" pomp, for short, worked as follows. The oil, extracted by the Oil Company Yukos subsidiaries, was stolen by way of registering fictitious ownership of shell companies, channeling it out at overcharged prices, and then selling it at fictitious auction sales. After that, products went to the address of shell firms, including those in Cyprus, for instance, at the address of the company "Pronet Holdings Limited". The real buyers (at overcharged prices) were customers in Europe and, in other countries.

The defendants Vladimir Malakhovsky and Vladimir Pereverzin were the managers involved in this scheme. In contrast to “general directors” from the street, they were tied with the leadership of the company Yukos and they understood, what they were doing, although, in court, they actively denied it.

Apart from that, numerous firms from the scheme of the "channeling" were tax beneficiaries registered in Russian regions. Such firms could receive benefits in exchange for their contribution to the development of the privileged territories. However, the receiving of tax benefits at the hands of Yukos became merely a "dirty scheme" of tax-dodging.

“The fictitious and formal character of the activity of the JSC “Ratibor”, JSC “Energotreid”, JSC “Yu-Mordovia”, JSC “Fargoil”, JSC Evoil”, JSC “Terren”, JSC “Mega-Alyans”, CJSC “Yukos-M’, JSC “Ratmir” was corroborated not only by the analysis of the “business activities”, expertise and tax audit reports, but also by testimonies of witnesses interrogated during the proceedings”, was pointed out in the materials of the court.

(See also the article “On this day, Nevzlin purchased for himself a chair in the Federation Council”. Beneficial locus from Yukos. Six shell firms under the supervision of Dubov and “bloody senator” Nevzlin).

For instance, according to the materials of the case, “in January-May 2001, the main nominal second-hand dealer of raw oil, was the JSC “Yu-Mordovia”, and the members of the organized group transferred to it, at undercharged prices, property rights of all oil production  JSC “Yuganskneftegaz”, JSC “Tomskneft” VNK and “JSC “Samaraneftegaz”. In the Region Mordovia Yukos had tax preferences, with which had to deal both the tax inspection and the investigation. The fictitious auction sales of "borehole liquid" were organized for them by the group headed by the acting general director of the company "Yukos-RM" Mikhail Yelfimov. 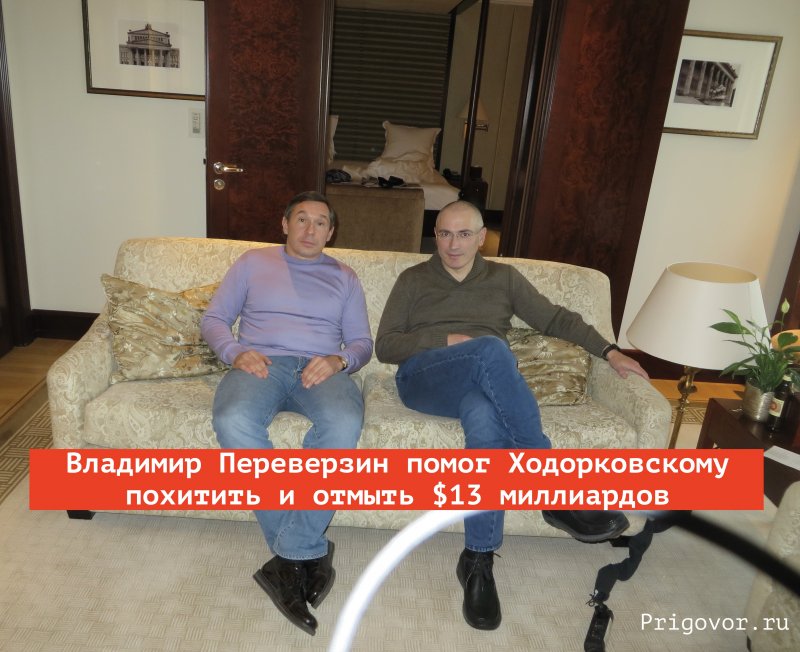 The scheme of the "oil selling", with the exclusion of some nuances, largely reproduced the scheme of selling "apatite concentrate".

After full power of the executive entities of the JSC “Yuganskneftegaz" were transferred to the controlling company CJSC "Yukos EP", the marketing scheme was created from intermediaries connected with the Oil Company Yukos. And the main part of the profit from the selling of oil, both on the internal and external markets, came not to the production companies, but the intermediaries from the Yukos scheme, with the exclusion of small extra charges. So, the main buyers of the oil, extracted by the Oil Company Yukos in 2000-2004, were the JSC "Evoil”, JSC “Ratibor”, JSC “Fargoil”, JSC “Yu-Mordovia” and JSC “Energotreid", i.e. intermediaries. Thereat, they were not independent, as defenders of Yukos argued in tax proceedings, but they were part of a large-scale scheme with a single control center.

A characteristic detail – a boorish attitude in Yukos towards those who had risked their freedom in favor of the prosperity of the "main shareholders" – was exposed in the course of the proceedings. In his evidence, the witness Pereverzina O.T. said that the firing of her husband from the company “Rutenhold” had been connected with the low wages. This issue Pereverzin V.I. discussed with the employee of the company Yukos Misamore, whom he had sent letters and received the following answer – Pereverzin V.I. is a simple administrative employee, and “if he is not comfortable with something, he can leave Cyprus”.

“THE ROBBED “AFFILIATES” OF THE OIL COMPANY YUKOS

The civil complainants JSC “Yuganskneftegaz”, JSC Samaraneftegaz” and the JSC “Tomskneft" VNK filed civil complaints on reparation of damages, inflicted on them, to the tune of 562 125 527 444 rubles, 15 kopeks, 77 000 000 000 rubles, and 93 000 000 000 rubles correspondingly, however, during the proceedings, it was established that, as the result of the concerted actions of all members of the organized group, including Malakhovsky V.G and Pereverzin V.I, the damage inflicted to the JSC “Yuganskneftegaz” JSC “Samaraneftegaz” and JSC “Tomskneft” VNK amounted to the total sum of 339.6 billion rubles”, held the verdict, in which the court stressed the right of the robbed “affiliates” to carry through investigation in order to recover the stolen assets in a civil case. 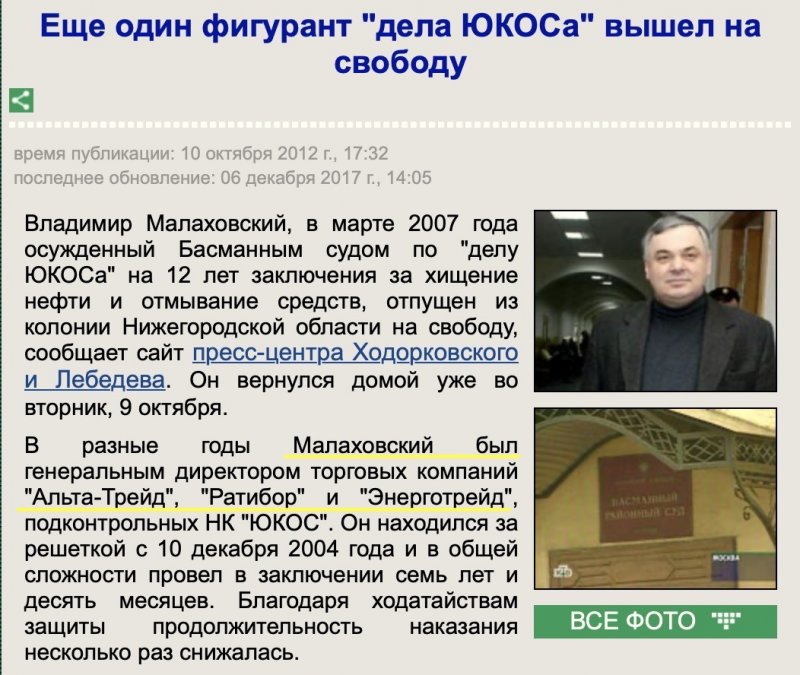 “Vladimir Pereverzin, after a series of corrections of laws on "economic" articles, was liberated on February 15, 2012, after 7 years and two months in custody. Pereverzin didn't pursue the way of correction, and now he continues to whiten himself as well as his masters from Yukos. Yet, along the way, he has written a couple of jail stories.

Vladimir Malakhovsky got out of jail in October 2012. The softening of some laws in the sphere of economic crimes was helpful for him”, notes the website Prigovor.ru.

(See also the previous article “On this day, Judge Leticia Clark said “No” to tax dodgers. “An effort of Yukos to morph the American bankruptcy system into an asylum for tax wrongdoers was refuted by the court of Texas. The website Prigovor.ru reminds its readers of what happened on February 28, 2005.

Читать на Русском
#дело юкоса#YUKOS case#схемы ЮКОСа#YUKOS schemes#tax swindlers from Yukos#налоговые мошенники из ЮКОСа #Малаховский, Владимир#Переверзин, Владимир#Mizamor, Bruce
Popular articles
Confessions of a Russian 'Robber Baron' Mega-merger creates country's new No. 1 oil firm led by billionaire tycoons
By David R. Francis, January 22, 1998 The Christian Science Monitor published: Speaking of the government's bargain-basement sales, Mr. Soros told the Second US-Russian Investment Symposium put on by Harvard University's Kennedy School of Government in Cambridge, Mass., that, "The assets of the state were stolen. It was quite repulsive. I didn't want to have anything to do with it."
Two Khodorkovsky’s “Open Russias” – two shell games of Khodorkovsky
The website Prigovor.ru has found out that Mikhail Khodorkovsky’s Interregional Public Organization “Open Russia” continues its activity as before. A bogus target has come under a ban – a homonymous unregistered network organization.
Paradise not lost for Khodorkovsky and Nevzlin
Prigovor.ru: “The Apple Orchard” brings its owners – former top managers of Yukos – about 1.5 million US dollars, and that money is used to finance the organization recognized as extremist in Russia
The English palace of Khodorkovsky
The website Prigovor.ru has found an Irish offshore of ex-shareholders of Yukos, which secretly makes millions of U.S. dollars in Russia. Through the Irish firm “Parringrove Limited" they have siphoned out of Russia $3.5 million of profits from leasing mansions in the community Zhukovka.