On this day, swindlers from Yukos sang an orphan song

“It was prohibited to the leadership of the company to conduct any operation with the land or with immovables of the lyceum “Podmoskovny” in the community Koralovo”. The website Prigovor.ru reminds its readers of what happened on May 5, 2006.

After a while, patented civil activists, connected, in one way or another, with Khodorkovsky’s money, made lacrimal conclusions of cosmic scale from a routine procedural matters – “the state is intended to take away the lyceum from the orphans for the account of paying outstanding debts of Yukos”. A whole series of their appeals, both individual and collective, appeared demanding “to save the lyceum”, “to found a people’s tutelage over it, to defend the orphans”.

Naturally, nobody was going to do that – the lyceum was, and still is, on its usual place, and also training programs, as well as children, with whose destinies the trickster from Yukos, together with “non indifferent” civil activists, were relentlessly speculating in 2003, telling, without a twinge of conscience, “how servicemen with assault rifles broke into the lyceum, because it was founded by Mikhail Khodorkovsky”.

(See also the article “On this day, the swindler Khodorkovsky was sheltering himself behind children”). 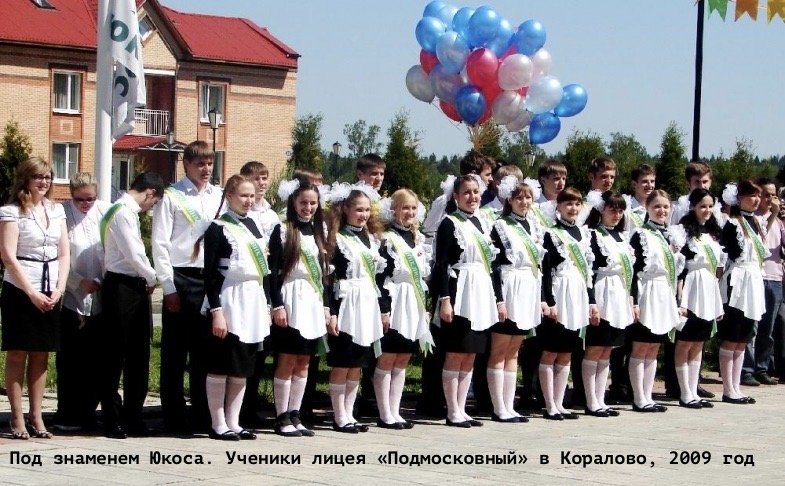 Under Yukos flag. Pupils of the lyceum “Podmoskovvny” in Koralovo, 2009.

Actually, the procedural actions were carried out in the administrative and household premises, where there were no children. On the other hand, a serious evidence base was found on finance-economic crimes of Khodorkovsky and of the organized criminal group consisting of the leadership of the Oil Company Yukos and the International Finance Association MFO “Menatep”. And the noisy “civil society” was not embarrassed by dubious methods of Yukos that had hidden bookkeeping and household reports in the utility room of the lyceum. That is why the cynical story of informational exploitation by Yukos of orphans’ image was loudly repeated together with the “explanation” of the press-service of Khodorkovsky that “the arrest of the buildings and the land plot of the lyceum is an interlocutory injunction. It means that the lyceum will continue its work as usual, but it’s prohibited to its leaders, until a decision of a court, to conduct any operations with the land and immovables of the institution”.

In other words, the investigation, in spite of lies and fantasies of the “civil activists”, did not deprive the children of anything. However, the investigation deprived the swindlers from Yukos of the possibility to bring quickly “to the hammer” the property and to siphon money to yet another offshore pocket of Khodorkovsky. The reason to issue the injunction with regard to the property was a serious one – Khodorkovsky made attempts to control the purse strings and the property even from the prison. Had there been no injunction, the cynical swindlers from Yukos would have squandered the Moscow-area boarding school, and, according to the tradition, would have covered themselves with destinies of disenfranchised children. 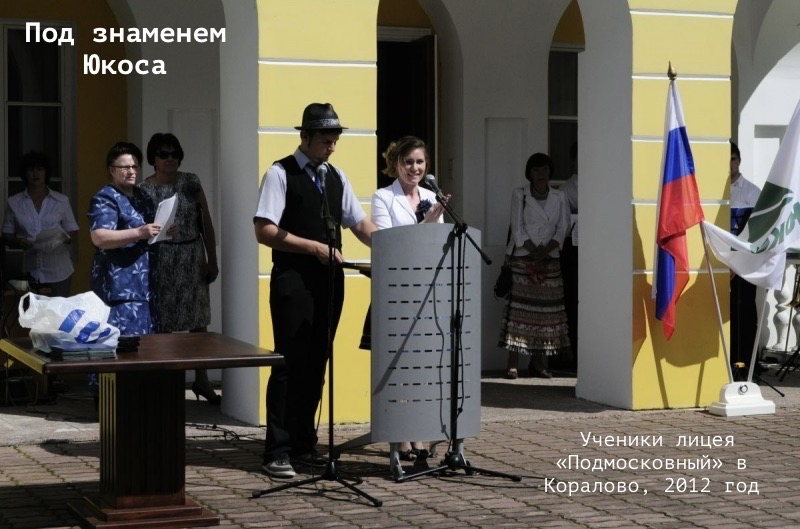 “THEY CONTINUED THE LEGALIZING WORK”

(From the materials of the second criminal case against Khodorkovsky M.B. and Lebedev P.L.)

“The evidence show that Khodorkovsky M.B. and Lebedev P.L. who, before the arrest, had started to legalize the property acquired through criminal means, and even after the arrest, in October and July 2003, correspondingly, being in custody in the pre-trial detention centers IZ-99/1 and IZ-77/1, continued, through their lawyers, to coordinate the work members of their criminal group under their control on conducting financial operations and other deals with monetary assets acquired through criminal means, as well as with other properties. Moreover, one of the lawyers, being the advocate of both defendants, coordinated between them concerted actions of members of the organized group, their roles, and, along with another lawyers, handed over instruction of the defendants on conclusion of legally important agreements and conducting financial operations”, notes the website Prigovor.ru.

(See also the previous article “On this day, Khodorkovsky completed in court his groundless show”. “Khodorkovsky M.B. is accused of organizing embezzlement, i.e. of organizing withdrawals of oil from oil producing companies”. The website Prigovor.ru reminds its readers of that happened on April 30, 2010).

Читать на Русском
#дело юкоса#YUKOS case#схемы ЮКОСа#YUKOS schemes#методы ЮКОСа#YUKOS methods #Khodorkovsky Mikhail
Popular articles
Ahnenerbe of Khodorkovsky
The Foundation “Future of Russia”* of Mikhail Khodorkovsky ** has issued a Russo-phobic manifesto “Russian Chromosome” and is pushing ideas of “new racism” directed against the Russians. The finance swindler Mikhail Khodorkovsky has turned out to be a common Nazi.
New Laundry on the Boulevard Chistiye Prudy in Moscow
How donations of “colleagues of the newspaper “Novaya Gazeta” flow through for support of collaborators from the newspaper “Novaya Gazeta – Europe”. $25 thousand from “Human Rights Foundation”. A Swiss purse of “friends”.
Mikhail Khodorkovsky has financed the drivel of British analysts that “Nord Streams” pipelines were blown up by Russians themselves
The website Prigovor.ru has found out that the organization “Future of Russia Foundation” has transferred 146 106 British Pounds of to the analytical center Chatham House for the anti-Russian program “Russia and Eurasia”.
Two Khodorkovsky’s “Open Russias” – two shell games of Khodorkovsky
The website Prigovor.ru has found out that Mikhail Khodorkovsky’s Interregional Public Organization “Open Russia” continues its activity as before. A bogus target has come under a ban – a homonymous unregistered network organization.