On this day, the billionaire Platon Lebedev was freed from a penal colony

The Supreme Court mitigated the punishment of Khodorkovsky and Lebedev, keeping intact their “solidary debt” to the amount of 17 billion rubles. The website Prigovor.ru reminds its readers of what happened on January 24, 2014.

On this day, on January 2014, Platon Lebedev walked free from the Velsk penal colony situated in the Archangelsk Region, where he had served his sentence after the verdict relating to the second case on the charge of embezzlement as well as legalizing of property and money.

At the end of December 2013, Vyacheslav Lebedev, the head of the Supreme Court of the Russian Federation, initiated a supervisory procedure on the first, as well as on the second case of the former Yukos managers having found in the materials procedural violations. As a result of the review, on January 23, 2014, the Presidium of the Supreme Court of Russia mitigated the punishments of Mikhail Khodorkovsky and Platon Lebedev. Thus the Court partially satisfied the supervisory appeal of Lebedev’s lawyers and the prosecutor’s citation.

(See the document: The citation of the Supreme Court of the Russian Federation, case No 310-П13, supervision)

In such a manner, the prison term of Khodorkovsky was slashed to 10 years and 7 months, and the prison term of Lebedev to 10 years, 6 months, and 22 days, i.e. according to the term already served. Both defendants were detained several months apart and were arrested in 2003. Then, in 2005, in the first case, the Court sentenced Lebedev and Khodorkovsky first to 9 years in a penal colony for fraud and tax evasion, and later the term was reduced to 8 years. In 2010, in the second case, Khodorkovsky and Lebedev were sentenced to 14 years of imprisonment for embezzlement and money laundering.

At that moment, Mikhail Khodorkovsky was already at large – on December 20, 2013, on the bases of a corresponding supplication, the Russian president Vladimir Putin signed the decree No922 “On pardoning of Khodorkovsky M.B.” Just after the liberation, Khodorkovsky decided to fly to Germany, and then moved to Switzerland, as his financial debt to the state was not discharged. Khodorkovsky reckoned that the authorities later would not let him out, as he was considered to be a fraudulent tax dodger.

Platon Lebedev left the correctional facility after the colony’s administration had received the original of the Judgement of the Supreme Court of Russia with the issued ruling, and on January 25, 2014, his lawyers said that he had returned to Moscow. Lebedev himself informed about the existence of the arrears imposed on him by the Court reasoning about possible difficulties on drawing-up of a foreign passport for traveling abroad,

The concern of Lebedev and Khodorkovsky about the possibility to leave the borders of Russia was not accidental – the Supreme Court upheld the decision about recovering from Khodorkovsky and Lebedev 17 billion rubles of tax arrears. The European Court of Human Rights called this decision “unjustified”. This sum of the “solidary debt” to the state Khodorkovsky and Lebedev, obviously, has not been discharged until now. In any case, reports of full redemption of the debt have not been published either by the Federal Bailiff Service, working on orders of procedures of Lebedev and Khodorkovsky, or the debtors themselves. 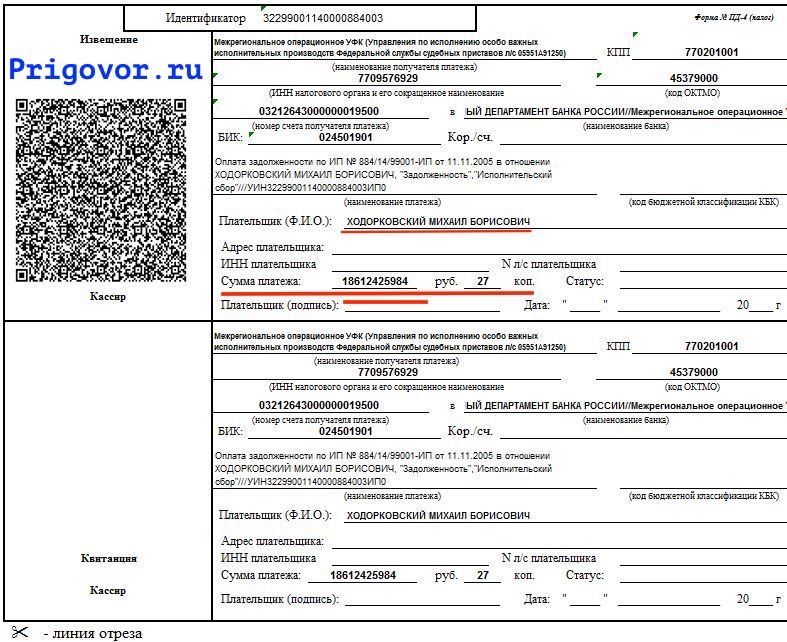 “As newspaper pointed out, telling about the debts of the billionaires, “according to the verdict, they remained heavily indebted. In fact, Nevzlin, the former Khodorkovsky’s vice in Yukos who has been put on a wanted list, contributed on account of the partial debt repayment 5 million U.S. dollars. The Court considered this fact as positive, but fulfilled the demand of the Federal Tax Service and collected from Khodorkovsky and Lebedev 17 billion 395 million rubles”, notes the website Prigivir.ru.

(See also the previous article “On this day, Vassily Shakhnovsky recalled taxes”. A witness on Shakhnovsky’s criminal case: “I don’t know, I don’t remember, I was several times away on business trips with Khodorkovsky and Lebedev”. The website Prigovor.ru reminds its readers of what happened on January 23, 2004.

Читать на Русском
#дело юкоса#YUKOS case#tax swindlers from Yukos#налоговые мошенники из ЮКОСа #Lebedev, Platon#Khodorkovsky Mikhail
Popular articles
Ahnenerbe of Khodorkovsky
The Foundation “Future of Russia”* of Mikhail Khodorkovsky ** has issued a Russo-phobic manifesto “Russian Chromosome” and is pushing ideas of “new racism” directed against the Russians. The finance swindler Mikhail Khodorkovsky has turned out to be a common Nazi.
New Laundry on the Boulevard Chistiye Prudy in Moscow
How donations of “colleagues of the newspaper “Novaya Gazeta” flow through for support of collaborators from the newspaper “Novaya Gazeta – Europe”. $25 thousand from “Human Rights Foundation”. A Swiss purse of “friends”.
Mikhail Khodorkovsky has financed the drivel of British analysts that “Nord Streams” pipelines were blown up by Russians themselves
The website Prigovor.ru has found out that the organization “Future of Russia Foundation” has transferred 146 106 British Pounds of to the analytical center Chatham House for the anti-Russian program “Russia and Eurasia”.
Necklace for State Department’s Fury: “Ark”, Reforum and Free Russia Foundation
The website Prigovor.ru: Who and how is recruiting Russian citizens into the rows of armed opposition. Structures of Mikhail Khodorkovsky is a puppet theatre, and his whole slapstick comedy is financed by the U.S. State Department through funds of Natalia Arno.