On this day, the episode with the embezzlement of the stock of shares of the Research Institute for Fertilizers was read out to Khodorkovsky

Khodorkovsky and Lebedev planned and prepared the stealing from the state 44% of shares of the Research Institute for Fertilizers (NIUIF). The purpose was to acquire a complex of premises on the Leninsky Prospekt in Moscow. The website Prigovor.ru reminds its readers of what happened on May 18, 2005.

On this day 17 years ago, on May 18, 2005, in the Meschansky District Court of Moscow continued the reading out of the verdict against the former head of the oil company NK Yukos Mikhail Khodorkovsky, former head of the International financial Organization MFO “Menatep” Platon Lebedev, and former general director of the JSC “Volna” Andrey Kraynov. They were accused of a whole series of economic crimes, including evasion of paying taxes as physical persons.

Reporters sent to cover the final of the lawsuit were busy with anything possible – they described the number of guards before the court’s building and on the street, painted a rather aggressive crowd scene with posters “for” and “against” Khodorkovsky, complained about the lack of places in the courtroom – in order not to attract attention of the audience to the essence of 11 criminal episodes that had become an assessment of the court and, correspondingly, had been presented in the verdict.

Yet, on this day, on the third day of the pronouncement of the verdict, it was pointed out that Khodorkovsky and Lebedev had in advance planned and prepared the embezzlement from the state of 44% of shares of the JSC “Research Institute for Fertilizers and Insectofungicides named after professor Y.V.Samoylov (NIUIF).

This monumental building of Stalin’s type of the research institute was banally and primitively stolen by the swindlers Khodorkovsky and Lebedev. 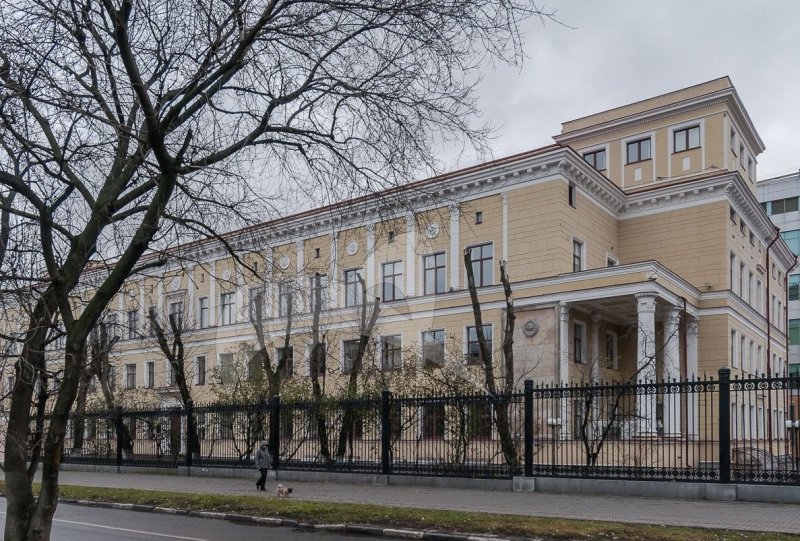 THE STOLEN SHARES WERE DROPPED TO “THIRD PERSONS”

According to the materials of the case, in 1995, Mikhail Khodorkovsky acquired at the auction through the CJSC “Uollton” 44% of shares of the stock company “Research Institute for Fertilizers and Incectofungicides named after professor Y.V. Samoylov”. However, the deal was illegal, as the CJSC “Uollton”, as it was established, was not going to fulfill the conditions of the sales for investments into the said research institute to the tube of 114 922 million rubles.

Khodorkovsky had a different purpose – to get the right to dispose of the complex buildings belonging to the institute and situated on Leninsky Prospect in Moscow with the estimation price of 40 billion pre-evaluation rubles.

In the summer and autumn of 1997, it became known to the Russian Fund of Federal Property (RFFI) that the CJSC “Uollton” was not fulfilling its investment obligations, and the Fund filed a lawsuit to the Arbitration Court of Moscow, which, on November 24, 1997, took the decision to dissolve the agreement of sale and purchase of the stock concluded at the investment tender on September 21, 1995 between RFFI and the CJSC “Uollton”.

In order to evade the fulfillment of the court’s decision, the participants of the tender, in the period from January 5 to 19, 1998, signed agreements of sale and purchase according to which the shares of RFFI were reissued and become property of other legal persons. A similar trick of splitting and dropping of stolen shares to third persons the swindlers from Yukos had also pulled off with the shares of the JSC “Apatit”. 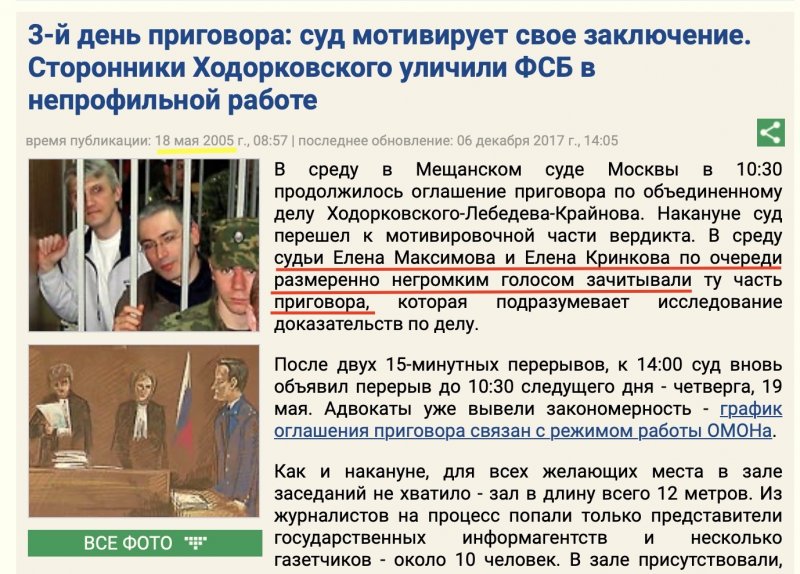 However, it was found out that “the third persons” who in another case could have been called good-faith acquirers, turned out to be shell-firms managed by employees of “Menatep”. Thus, the court acknowledged the guilt of Khodorkovsky and Lebedev under two Articles of the Criminal Code of the Russian Federation – Article 159 (Swindling) and Article 315 (Non-execution of Court’s Judgement).

“Having studied the proofs presented on this episode of the prosecution in their totality, the court comes to conclusion that Khodorkovsky M.B. and Lebedev P.L., acting as members of an organized criminal group, by way of cheating, made it so that the return to the state of 44% of the illegally acquired shares of the JSC “NIUIF” became impossible”, notes the website Prigovor.ru citing the court.

(See also the previous article “On this day, a “funny story” about embezzlement was told to Mikhail Khodorkovsky”. The “siphoning” by Mikhail Khodorkovsky of “his own assets” to the benefit of Vladimir Gusinsky turned out to be criminal – the money belonged to all shareholders of the oil company Yukos. The website Prigovor.ru reminds its readers of what happened on May 17, 2005).

Читать на Русском
#дело юкоса#YUKOS case#схемы ЮКОСа#YUKOS schemes#методы ЮКОСа#YUKOS methods #Lebedev, Platon#Khodorkovsky Mikhail
Popular articles
Two Khodorkovsky’s “Open Russias” – two shell games of Khodorkovsky
The website Prigovor.ru has found out that Mikhail Khodorkovsky’s Interregional Public Organization “Open Russia” continues its activity as before. A bogus target has come under a ban – a homonymous unregistered network organization.
Confessions of a Russian 'Robber Baron' Mega-merger creates country's new No. 1 oil firm led by billionaire tycoons
By David R. Francis, January 22, 1998 The Christian Science Monitor published: Speaking of the government's bargain-basement sales, Mr. Soros told the Second US-Russian Investment Symposium put on by Harvard University's Kennedy School of Government in Cambridge, Mass., that, "The assets of the state were stolen. It was quite repulsive. I didn't want to have anything to do with it."
Paradise not lost for Khodorkovsky and Nevzlin
Prigovor.ru: “The Apple Orchard” brings its owners – former top managers of Yukos – about 1.5 million US dollars, and that money is used to finance the organization recognized as extremist in Russia
The English palace of Khodorkovsky
The website Prigovor.ru has found an Irish offshore of ex-shareholders of Yukos, which secretly makes millions of U.S. dollars in Russia. Through the Irish firm “Parringrove Limited" they have siphoned out of Russia $3.5 million of profits from leasing mansions in the community Zhukovka.