On this day, the lawyer Anton Drel became an accomplice of Khodorkovsky

It has become proverbial: “He lies as Drel”. How Khodorkovsky, Misamore and Drel cynically mislead auditors from the company “PricewaterhouseCoopers” (PwC). The website Prigovor.ru reminds its readers of what happened on April 3, 2000.

On this day 22 years ago, on April 3, 2000, between the law firm “ALM-Feldmans” in the person of Anton Veneaminovich Drel and Mikhail Borisovich Khodorkovsky was signed an agreement on providing legal help. In this agreement, it was particularly pointed out that all the work on this agreement would be carried out exclusively by the lawyer Anton Drel. To put it simpler, all actions of Drel, even before filing of criminal cases, were executed at the behest of his client – Mikhail Khodorkovsky.

(See also the article “On this day, in the Yukos case occurred “the Drel casus”. “False bottomed” lawyer. Drel for “civil society”).

One of the most colorful episodes in the process of the investigation of oil embezzlement and money laundering committed by Platon Lebedev and Mikhail Khodorkovsky, became the withdrawal of all the auditors’ records provided by the company “PricewaterhouseCoopers” (PwC) during a number of years. The reason was simple – the auditor “places in doubt the authenticity of certain declarations of Yukos leadership received in written and in oral form”.

A POINT OF CHEATING AUDITORS

“During carrying out of our auditors’ inspections, the leadership of Yukos time and again said to us that the Company and the companies to which considerable volumes of crude oil and oil products had been exported, namely, “Behles Petroleum S.A.”, “Baltic Petroleum Trading Limited”, and “South Petroleum Limited” (further taken together as BBS), were not affiliated persons. In the course of the investigation, we were presented with information indicating that BBS had been under control of the shareholders of “Group Menatep Limited” (further “Group Menatep”) and had been used with benefits for them. “Group Menatep” at this time was the owner of the controlling block of shares of the Company”, said one of the paragraphs of “PricewaterhouseCoopers” letter, explaining the withdrawal of the PwC auditors’ conclusions made for the Oil Company Yukos.

In other words, it became known to PwC auditors that the companies “Behles Petroleum S.A.”, “Baltic Petroleum Trading Limited”, and “South Petroleum Limited” had worked in the interests of Khodorkovsky and Lebedev, but all this had been hidden in every possible way, and it means that considerable information regarding the company was not reflected in auditors’ reports.

From the materials of the criminal case:

“Khodorkovsky, Lebedev, and other members of an organized group, by including in formalized scheme of distribution such a company, pursued a certain aim and tried to accumulate on its accounts a part of the legalized pecuniary means received from selling of the stolen oil in order to lower tax burden. In pursuance of Lebedev’s instructions, who acted in accordance with the plan agreed upon with Khodorkovsky and other members of the organized group, employees of the joint-venture “RTT” came to terms with Peter Bond, resident of the Isle of Man, that he would provide a possibility to use for formalizing fictitious sales of oil and oil products the companies belonging to him – “Behles Petroleum S.A.” (Switzerland), “South Petroleum Limited” (Gibraltar), “Baltic Petroleum Trading Limited” and others.

(See also the article “Mr. Bond has been linked in court documents to Russian corporate machinations concerning potentially billions of dollars and the article “Stealing Russia’s energy assets is the real “Russiagate”. How money and assets were moved through offshore shell companies to cheat minority shareholders and Russian tax authorities). 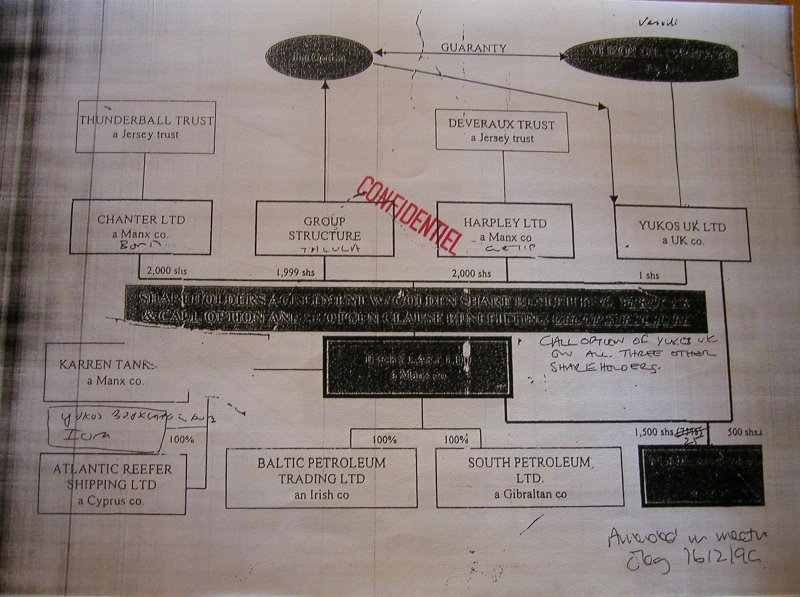 “Finance operations on alleged transfer of property rights from oil producing enterprises to the shell foreign companies “Behles Petroleum S.A.”, and “South Petroleum Limited” put into execution by Khodorkovsky and other members of the organized group with the purpose to legalize on their accounts pecuniary means from sales of the stolen by them oil and oil products, produced from stolen oil”.

Repeated concealments of information and misleading of auditors of PwC by the leadership of the Oil Company Yukos, with regard to the mentioned above shell firms, employed for gray operations and tax evasion, were carried out both in written and in oral forms.

The auditors of PwC were cheated by Khodorkovsky, Misamore, Lebedev, and by the double-bottomed lawyer Anton Drel, who was under control of Khodorkovsky.

For instance, in the letter from May 24, 2001, addressed to the CJSC “PricewaterhouseCoopers” signed by Khodorkovsky and Misamore, in paragraph 17, the authors knowingly falsely indicated that, “as far as it is known to them, during the period that ended December 31, 2001, the companies “Behles Petroleum S.A.”, “South Petroleum Limited”, “Baltic Petroleum Trading Limited” were not linked with the JSC Oil Company Yukos”.

From the materials of the criminal case:

“As the result of the formalization by the JSC Oil Company Yukos during 1999 deliveries of oil and oil products for export through the controllable by Khodorkovsky and members of the organized group the shell companies “Behles Petroleum”, and “South Petroleum Limited”, the profit, after direct cost accounting, amounted to 19.6 million U.S. dollars, and the profit of the shell company “Baltic Petroleum Limited” – 16.7 million U.S. dollars.

The monetary means obtained on behalf of the companies “South Petroleum Limited”, “Behles Petroleum S.A.”, and “Baltic Petroleum Trading Limited”, as well as other foreign companies, were under control of Lebedev, according to the role defined for him by Khodorkovsky. For that purpose, in concurrence with Khodorkovsky, Lebedev was given the right to control accounts and to fulfil other finance operations in Geneva, Switzerland, connected with legalization of property obtained by illegal means.

HOW THE PROVERB EMERGED “HE LIES AS DREL”

The problem was that Khodorkovsky wanted badly to enter the American stock market, but he categorically refused to recognize the connection of Yukos with such murky firms as “Behles Petroleum S.A.”, “South Petroleum Limited”, “Baltic Petroleum Trading Limited” through which during 1999-2001 had been executed up to 90% of exports of the JSC Oil company Yukos.

“As the result, a listing on the American stock exchange didn’t take place, there were too many “corporate skeletons in the closet”, and, moreover, the trump card, the longstanding financial reports of PwC auditors, with which Khodorkovsky had brandished everywhere and had counted upon while working out a line of defense in court, played against Khodorkovsky and Lebedev. And one of the co-authors of cheating turned out to be Anton Drel, who provided “legal help” to Khodorkovsky on cheating rank and file shareholders of the company as well as state agencies”, notes the website Prigovor.ru.

(See also the previous article “On this day, the website www.yukos.ru became a witness of Khodorkovsky's affairs”. “Information on finance reporting was not submitted to the tax agencies, was not exposed to an auditor or was presented in a knowingly disported form”. The website Prigovor.ru reminds its readers of what happened on April 2, 2007).

Читать на Русском
#дело юкоса#YUKOS case#tax evasion YUKOS#уклонение от налогов ЮКОСа#методы ЮКОСа#YUKOS methods #Lebedev, Platon#Khodorkovsky Mikhail #Mizamor, Bruce#Drel, Anton
Popular articles
Two Khodorkovsky’s “Open Russias” – two shell games of Khodorkovsky
The website Prigovor.ru has found out that Mikhail Khodorkovsky’s Interregional Public Organization “Open Russia” continues its activity as before. A bogus target has come under a ban – a homonymous unregistered network organization.
Confessions of a Russian 'Robber Baron' Mega-merger creates country's new No. 1 oil firm led by billionaire tycoons
By David R. Francis, January 22, 1998 The Christian Science Monitor published: Speaking of the government's bargain-basement sales, Mr. Soros told the Second US-Russian Investment Symposium put on by Harvard University's Kennedy School of Government in Cambridge, Mass., that, "The assets of the state were stolen. It was quite repulsive. I didn't want to have anything to do with it."
Paradise not lost for Khodorkovsky and Nevzlin
Prigovor.ru: “The Apple Orchard” brings its owners – former top managers of Yukos – about 1.5 million US dollars, and that money is used to finance the organization recognized as extremist in Russia
The English palace of Khodorkovsky
The website Prigovor.ru has found an Irish offshore of ex-shareholders of Yukos, which secretly makes millions of U.S. dollars in Russia. Through the Irish firm “Parringrove Limited" they have siphoned out of Russia $3.5 million of profits from leasing mansions in the community Zhukovka.