Ukrainian lobbyists in 2021 contacted with members of the U.S. Congress 10 000 times

Sponsors of the armed Russophobia. Ukrainian oligarchs Pinchuk and Akhmetov, together with Khodorkovsky, for many years have sponsored the think tank “The Atlantic Council” affiliated with NATO.

On February 21, on the eve of the special operation in Ukraine, the website Prigovor.ro told that the tender-hearted Mikhail Khodorkovsky had financed a proposal ”to increase military help to Ukraine up to 1 billion U.S. dollars a year”. The fugitive tax dodger, has turned out to be a permanent sponsor of the affiliated with NATO think tank “The Atlantic Council” which, in the beginning of February, issued a report calling to increase weapon deliveries to Ukraine.

Having gone a bit deeper into this theme, the website Prigovor.ru had found out additionally that in financing this report two Ukrainian oligarchs had kept company to Khodorkovsky – Viktor Pinchuk and Rinat Akhmetov.

It turned out that Pinchuk and Akhmetov even exceed Mikhail Khodorkovsky in his generosity, regularly paying for activity of political analysts from NATO. On the website of “The Atlantic Council”, in the section “Honor roll of contributors”, providing help to the amount $250 000 - $499 999, among others, is mentioned Viktor Pinchuk Foundation, belonging to the famous Ukrainian oligarch Viktor Pinchuk. 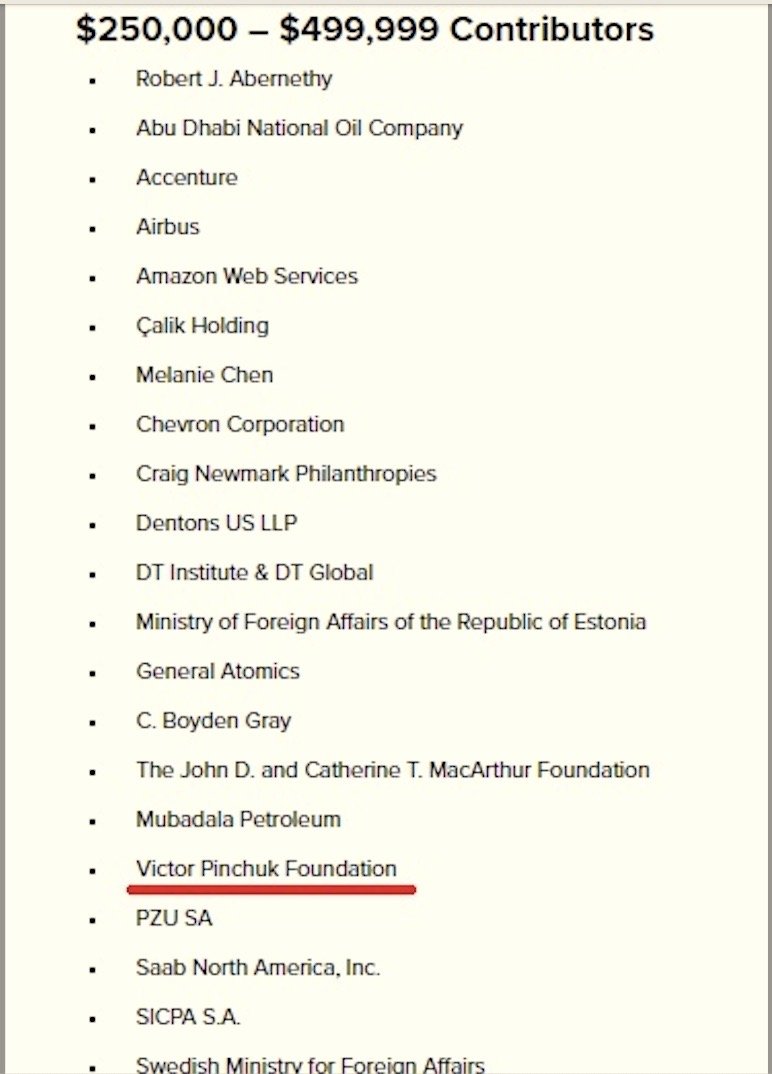 Viktor Pinchuk has been dealing for a long time with the whitewashing of his reputation, he has been diligently presented himself as a philanthropist and Maecenas. He has created a charitable foundation named after himself, through which help is provided, including to NATO’s analytical center “Atlantic Council”*.

What the “philanthropist” Viktor Pinchuk calls for? For example, on March 14, 2022, in the media outlet “The Wall Street Journal”, under his signature, was published an article entitled “Ukraine Needs More Than Sympathy From the West to Beat Russia”, in which the “war philanthropist” Viktor Pinchuk calls for the following: “But if you want to save us, Ukraine needs planes, antiaircraft and antitank missiles, armed drones and other weapons of war. So I beg our friends in the West: Please, give Ukraine the planes and other weapons it needs – now”. 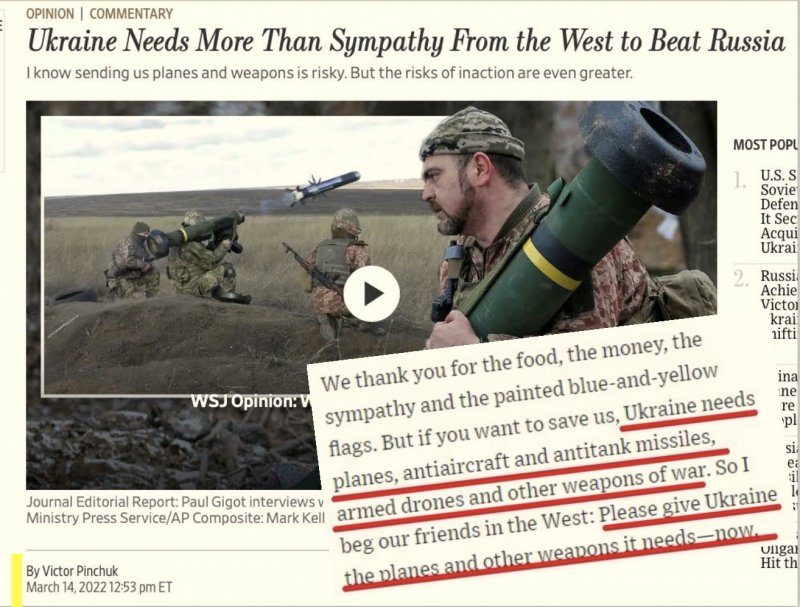 Viktor Pinchul has also previous merits to the think tank “The Atlantic Council”, as in 2016 he was included in “the International Consultative Council” of this analytical center. Perhaps, the inclusion of Viktor Pinchuk was lobbied through by his old friends – the family of the former U.S. President Bill Clinton, to the foundation of which, according to the newspaper “The New York Times”, he has transferred since 2006 more than 13.1 million dollars.

Besides, in 2005, he was honored with quite different epithets. It’s worth remembering that one of the demands of the first Maidan in Kiev, of the so-called “Orange Revolution”, was the return to the state ownership the metallurgic giant “Krivorozhstal” bought out at a knockdown price by the son-in-low of Leonid Kuchma, the sitting president at that time, and by another oligarch Rinat Akhmetov.

When Yulia Timoshenko was prime-minister of Ukraine, she assured: “…there are no legal arguments for keeping the integrated plant in property of the businessman from Donezk Rinat Akhmetov and Viktor Pinchuk, the son-in-law of the ex-president Leonid Kuchma”.

Valentina Semenyuk, the head of Ukraine’s State property fund, was even more eloquent and precise in her wordings: “Pinchuk and Akhmetov, in fact, stole “Krivorozhstal” by preventing from taking part in the auction sales Russian companies, such as “Severstal”, and that is why this company will never be it their possession and the government will never make any agreements or trade-offs with these oligarchs”.

In that sense, the former oligarch Mikhail Khodorkovsky, who had privatized Yukos in a bandit-like manner, is their twin brother.

MORE THAN 10 000 MESSAGES AND MEETINGS

Rinat Akhmetov is another permanent sponsor of the affiliated with NATO and anti-Russian think tank “The Atlantic Council”*. Through his company “System Capital Management” he donates to this organization each year a considerable sum of money: from $500 000 to 999 999. 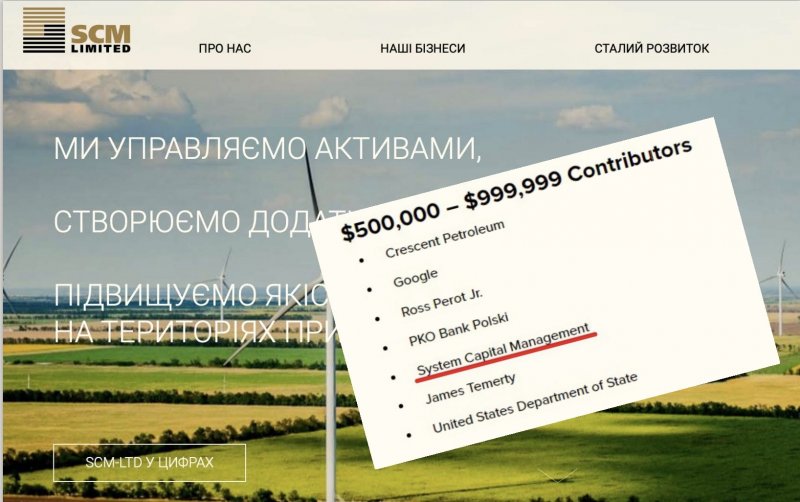 For reference: Rinat Akhmetov is the richest man in Ukraine, founder and owner of the company “System Capital Management/SCM”, under control of which are up to 500 enterprises in Ukraine and beyond its borders.

Rinat Akhmetov has an ambivalent reputation, some aspects of which are reflected in the investigation of the journalists of the newspaper “Novaya Gazeta” under the title “Donbass of a dead man”, in which it is told also about Rinat Akhmetov’s support of the Nazi battalion “Azov”.

The activity of the Ukrainian lobbyists in 2021 with the requests to increase military support for Ukraine, astounded even American journalists. In particular, the news outlet “The Intercept” argued that the Ukrainian lobbyists in 2021 contacted members of the U.S. Congress 10 000 times (!) And this is only official data, that American journalists received on the bases of the documents connected with FARA –The Foreign Agents Registration Act. It is also pointed out that from 1100 requests of Ukrainian lobbyists to American analytical centers, more than haft fell upon to contacts with “The Atlantic Council”. 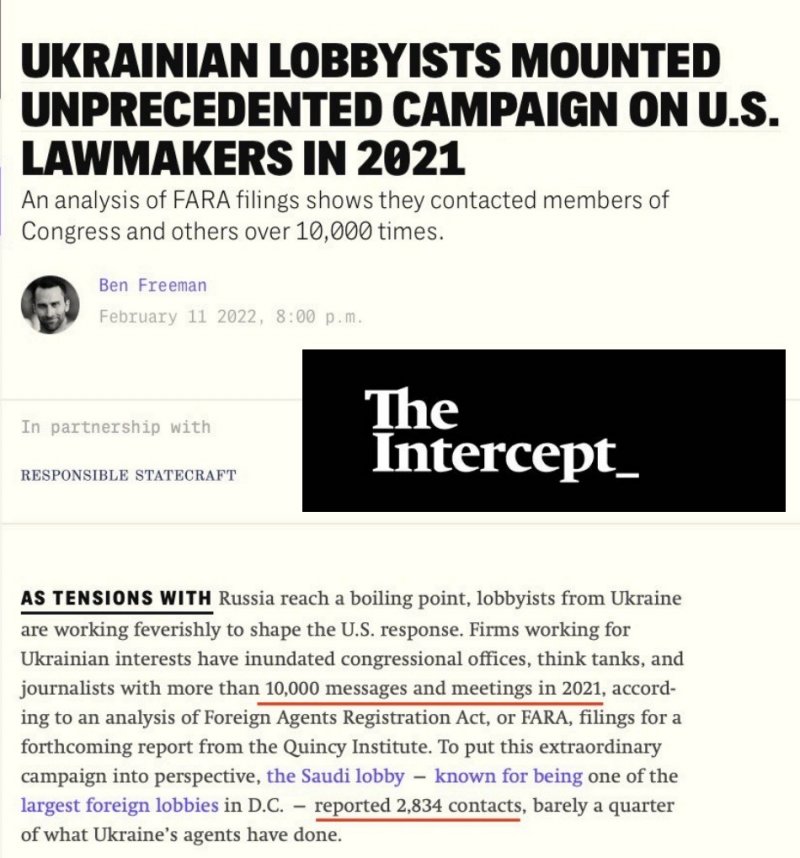 “Lobbyists from Ukraine are working feverishly to shape the U.S. response. Firms working for Ukrainian interests have inundated congressional offices, think tanks, and journalists with more than 10 000 messages and meetings in 2021, according to an analysis of Foreign Agents Registration Act, or FARA”.

Thereat, even foreign journalists call into question various polls and surveys carries out by “The Atlantic Council”, for instance one entitled “Survey: Western public backs stronger support for Ukraine against Russia”, as they note that the objectivity of this survey (it was provided by the Viktor Pinchuk Foundation which sponsors “The Atlantic Council”* and is a member of its consultative council) raises their doubts. 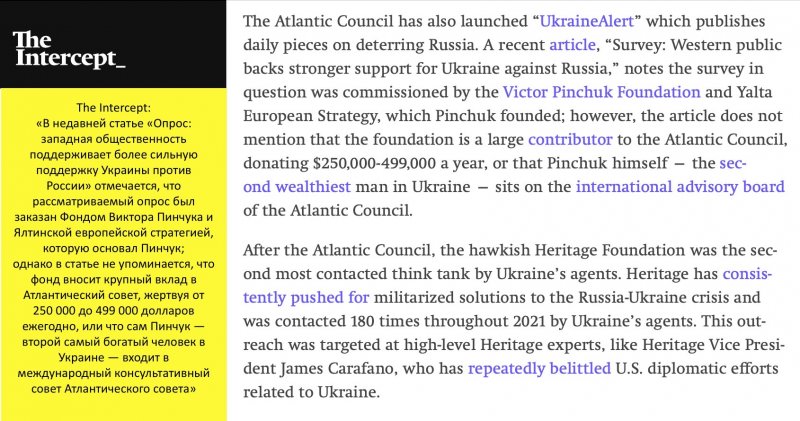 MUTUAL TOP-MANAGER OF KHODORKOVSKY AND PINCHUK

Such an oligarchic international – Khodorkovsky, Pinchuk, Akhmetov and others – methodically and targeted sponsors/bribes American analysts, experts and members of the U.S. Congress. And they are bought with pleasure. Its comfortable to get additional money for Russophobia.

By the way, it's worth pointing out that Viktor Pinshuk calls for delivery of arms to Ukraine, while leaving in London where he registered in 2007 the company Eastone Group Limited, which is an “international investment-consulting group”, according to the website of the company.

Thereat, having studied the reports of the company, in which as the sole owners is mentioned Viktor Pinshuk and his wife Yelena Pinchuk (the daughter of the second president of Ukraine Leonid Kuchma), it becomes clear that the oligarch, whose fortune, according to the journal “Forbes”, amounts to 2.5 billion dollars, does not show his actual assets and, correspondingly, doesn’t pay taxes from them (in reports are mentioned sums to the tune of a million pounds a year).

By the way, there is a nuance: Khodorkovsky and Pinchuk are tied by their mutual manager Timothy William Osborne. He holds the position of director in the Viktor Pinchuk’s company “Eastone Group Limited”. Apart from that, Timothy Osborne is also director in several companies connected with Mikhail Khodorkovsky - in Hulley Enterprises Limited (one of the claimant companies of the “Yukos plea” worth 50 billion dollars in international arbitration), and in the company “Future of Russia Foundation**.

“Now it is clear what whispers in the ears of the tax swindler Khodorkovsky and Ukrainian “privatizer” Pinchuk the American top-manager”, notes the website Prigovor.ru.

*“The Atlantic Council” – organization the activity of which is recognized as undesirables on the territory of the Russian Federation.

**“Future of Russia Foundation” - organization the activity of which is recognized as undesirables on the territory of the Russian Federation.

Читать на Русском
Author: Alexander Zhelnin
#Khodorkovsky 's schemes#схемы Ходорковского#Khodorkovsky 's methods#методы Ходорковского#Khodorkovsky's connections in the USA#связи Ходорковского в США #Khodorkovsky Mikhail
Popular articles
Two Khodorkovsky’s “Open Russias” – two shell games of Khodorkovsky
The website Prigovor.ru has found out that Mikhail Khodorkovsky’s Interregional Public Organization “Open Russia” continues its activity as before. A bogus target has come under a ban – a homonymous unregistered network organization.
Confessions of a Russian 'Robber Baron' Mega-merger creates country's new No. 1 oil firm led by billionaire tycoons
By David R. Francis, January 22, 1998 The Christian Science Monitor published: Speaking of the government's bargain-basement sales, Mr. Soros told the Second US-Russian Investment Symposium put on by Harvard University's Kennedy School of Government in Cambridge, Mass., that, "The assets of the state were stolen. It was quite repulsive. I didn't want to have anything to do with it."
Paradise not lost for Khodorkovsky and Nevzlin
Prigovor.ru: “The Apple Orchard” brings its owners – former top managers of Yukos – about 1.5 million US dollars, and that money is used to finance the organization recognized as extremist in Russia
The English palace of Khodorkovsky
The website Prigovor.ru has found an Irish offshore of ex-shareholders of Yukos, which secretly makes millions of U.S. dollars in Russia. Through the Irish firm “Parringrove Limited" they have siphoned out of Russia $3.5 million of profits from leasing mansions in the community Zhukovka.