Oт this day, they started to model a “prisoner of conscience” out of Khodorkovsky

A specific client of human rights activists. Lobbyists of Yukos found in the United States. It’s the firm “Covington & Burling LLP” which was hired by the Group Menatep Limited for $2 million 800 thousand. The website Prigovor.ru reminds its readers of what happened on November 9, 2003.

On these days 18 years ago, in November 2003, the “civil society”, which had been receiving from Yukos 100 million U.S. dollars a year, was boiling up and spouting on intentions in connection with the arrest of Mikhail Khodorkovsky. Some of them started suddenly to argue that Khodorkovsky, by all means, should become a candidate for the presidency in Russia.

High activity in this question displayed the fugitive oligarchs Boris Berezovsky and Vladimir Gussinsky, about whom they started gradually to forget in order not to spoil the mythology of “Khodorkovsky’s legend” being sold to the West. Others included the theme of the “politicization" of the investigation with regard to the financial machinations and tax crimes of Khodorkovsky's empire. 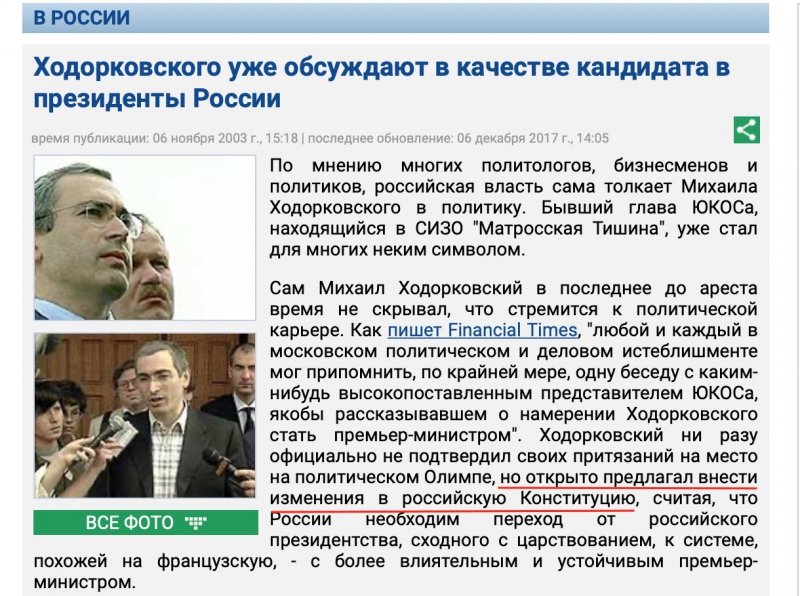 “THE QUESTION IS NOT ABOUT ASKING FOR SETTING HIM FREE”

At the beginning of November 2003, “a group of Russian human rights activists addressed the organization “Amnesty International” with a request to recognize Mikhail Khodorkovsky, the former head of the Oil Company Yukos, as a political prisoner. According to Yelena Bonner, Vladimir Bukovsky, Natalya Gornabevskaya, Sergey Kovalyov, Eduard Kuznetsov, and Alexander Podrabinek, who had signed this letter, “the criminal cases, the defendants of which have become Mikhail Khodorkovsky and his colleagues from the company Yukos, have strongly pronounced political character”, reported the newspaper “Kommersant”.

The reporters would not limit themselves with the statement of fact of sending the appeal, but they also found out in such a case in the international human rights movement there was a certain set of rules and evaluation criteria. Denis Krivosheyev, the coordinator of "Amnesty International" working with mass media, said that "members of the Russian affiliate have no right to deal with this issue, as they cannot be unprejudiced towards a citizen of their own country”. In case Mr. Khodorkovsky would be recognized as a political prisoner, this human rights organization plans to address the Russian government with the demand of fair judicial proceedings. "There is no question of asking for liberation”.

(By the way, several years later, the Russian human rights community invested itself with authority to designate “political prisoners” and that, on numerous occasions, entailed controversial situations and seriously devaluated the status that used to be loud.

The names of those who signed the message spoke for themselves – these were experienced dissidents, each one with his own, sometimes rather controversial, set of claims to the authorities, to the society, well, to everything. Nevertheless, they respected the rules inside the international human rights movement, despite the notorious expediency. Besides, the client was also a specific one – charges under seven Articles of the Criminal Code of Russia, including tax crimes, and damage to the state budget to the tune of 1 billion U.S. dollars. Namely, with this set of charges, Khodorkovsky found himself under arrest. Perhaps, that is why "Amnesty International" was doubtful of the reputation of the "prisoner", as well as the "initiators" with their loud slogans.

“COULD NOT BE RECOGNIZED AS A PRISONER OF CONSCIENCE…”

As it turned out later, unsuccessful was even the quadruple appeal of the fighters for Khodorkovsky’s rights to “Amnesty International” – to recognize him as somebody, either as a “prisoner of conscience”, or as a “political prisoner”. And, in April 2005, when “Amnesty International” rejected, in principle, all inquiries, the Russian human rights community seriously took offense. (See also: «Международная амнистия» отказалась признать Ходорковского политзаключенным»).

Still, “Amnesty International” made a statement on this issue, and with a rather clear wording. As the newspaper “Izvestiya” pointed out, “in its statement, “Amnesty international” recognized "the considerable political context" of this criminal case, and expressed its preoccupation concerning procedural irregularities, but it did not recognize Khodorkovsky and other defendants of the "Yukos affair" as prisoners of conscience and political prisoners”.

In other words, “Amnesty International”, from 2001 on, shifted its priorities, and that, certainly, was known in Russia. Nevertheless, in 2003 they started to push the tax billionaire and swindler to the ranks of those who sometimes don’t even have money for lawyers. Yelena Bonner and Sergey Kovalyov were uncompromising in their grievance. According to them, “the head of “Amnesty International” Irene Khan dreams to get the position of the United Nations general secretary, and that is why she doesn’t want to quarrel with Russia, a member of the Security Council of the UN” – in such a way, they explained the failure of their plan which clearly was initiated by the henchmen of Mikhail Khodorkovsky and Leonid Nevzlin, who had created “a considerable political context” of the criminal case dealing with tax tricksters and murderers.

HUMAN RIGHTS CAUSE IN THE CONTEXT OF MONEY

Practically, there is no doubt that the appeal of Bonner and Kovalyov was put into “the context” of Nevzlin’s operation, of fugitive paymaster of murders and attempted murders. The question of whether their activity was paid for or not doesn’t play any role. Here the context is important within which human rights activists acted.

And the context is like this. From January 18, 2005, “Group Menatep Limited” (GML) started lobbying in the United States and engaged for this purpose for $960 thousand the firm “Greenberg Traurig, LLP”.  The aim of the lobbying was “to assure the support of the U.S government of rule of law in Russia, naturally, in the interests of GML and Yukos. Another aspect of the GML interest is "The policy of the United States towards sovereign wealth funds". Is there also a fraudulent attempt directed to the Russian assets with the participation of the United States? It is an issue that demands separate attention. But that’s a fact that Americans were working off the money received from Nevzlin, the fugitive serial mastermind of murders. 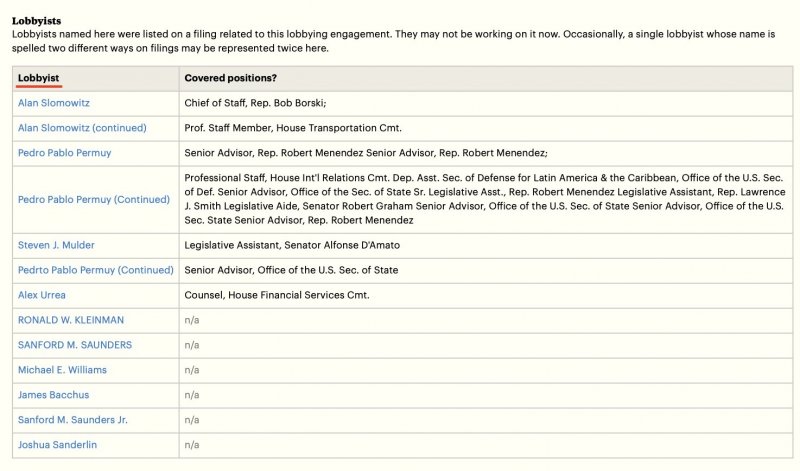 COMMERCIAL REPEAT OF THE OLD TRICK

The swindlers and murderers from Yukos are protected by expensive lobbyists, as well as acquired "non-indifferent citizens" and simply rabid Russophobes.

Later, in 2011, the scheme of “politicization of the affair” was repeated. With a new request, it’s difficult to count them all, to “Amnesty International” demanding to “immediately recognize” Mikhail Khodorkovsky and Platon Lebedev as “prisoners of conscience” addressed “the most well-known people of the country”, and they stressed “the independent political views and position” of the tax criminals.

But “Amnesty International” once more refused to recognize former Yukos leaders Mikhail Khodorkovsky and Platon Lebedev as prisoners of conscience. 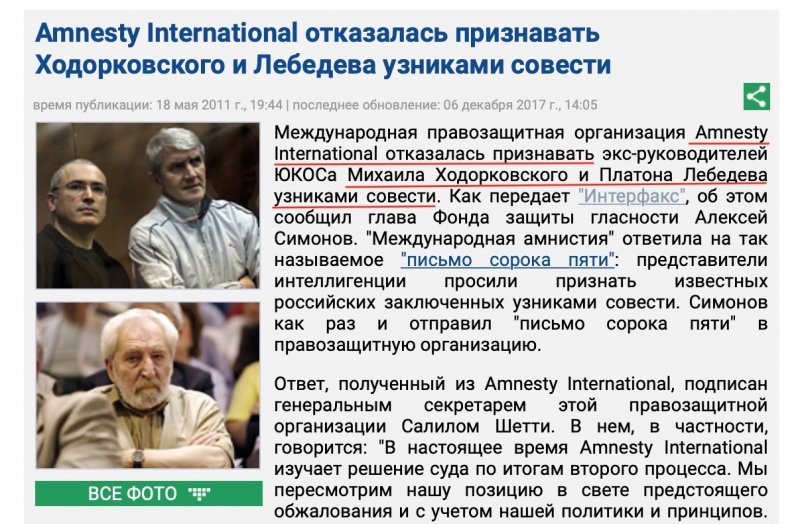 The initiators once more were offended. "This ambiguous, anfractuous and clarifying nothing response resembles very much rulings of Soviet courts", said with indignation Alexey Simonov, the head of the "Foundation for the defense of glasnost" (fulfills the function of a foreign agent). It’s quite understandable – the old financial ties with Khodorkovsky’s purse oblige. This is also mentioned on the website of this organization, in breach of the law, at that – in enumerating its expensive partners the foundation has not mentioned that some of them are in the registry of “undesirable organization”. But let those tackle this question who are supposed to do it in accordance with their official duties.

And we will simply prove the formula – the activity of "non-indifferent citizens" together with lobbyist activity of the criminals. And once again we juxtapose yet another entry in the "American cash register” pertaining to the firm “Covington & Burling LLP”, engaged by the GML on May 2011 for $2 million 800 thousand.

GML up to the present day “brings in” money for “strengthening of the United States government’s support of rule of law in Russia and for help from the U.S. government in getting compensation from the Russian Federation, and pushes hard for interests of the American stockholders in the Oil Company Yukos.

The newest report the engaged lobbyists presented quite recently – on October 18, 2021. As an affiliated organization in the registry is itemized “GML Limited”, and as connected with it entity is mentioned “Palmus Trust Company Limited” (Guernsey, Great Britain), that for a long period of time has become tedious in the press as the firm, connected with the tax swindler Mikhail Khodorkovsky. 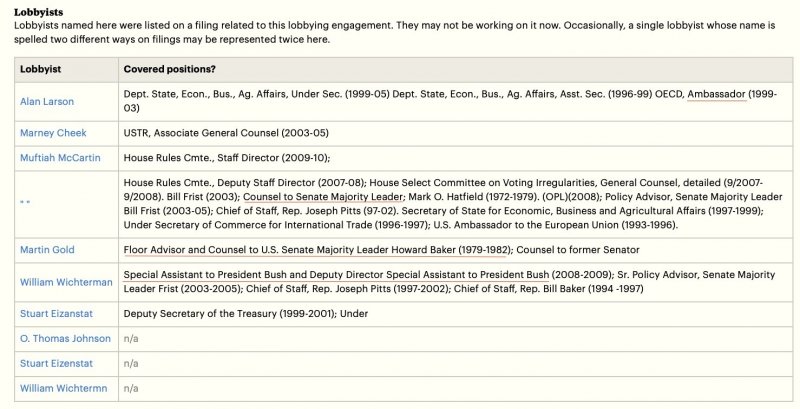 “So, it works like this – Nevzlin and Khodorkovsky bring money to the Americans, they, in their turn, push their interests through the state agencies of the United States, where corruption is legalized, and the “civil society” in Russia and Europe are being activated whenever required, but, as a rule, it is synchronized with “bringing in” money to the Americans. Such a democracy is shaping up, a democracy propped up by corruption”, notes the website Prigovor.ru.

(See also the previous article “On this day, “Menatep” emerged in a scandal of arms trading”. Tanks for Angola. “Platon Lebedev personally interfered so that “Menatep” could finance the supply of Russian arms to Angola in the middle of the 1990s”. The website Prigovor.ru reminds its readers of what happened on November 8, 2003.

Читать на Русском
#лоббисты ЮКОСа в США#Lobbyists of YUKOS in the United States #Nevzlin Leonid#Khodorkovsky Mikhail
Popular articles
Two Khodorkovsky’s “Open Russias” – two shell games of Khodorkovsky
The website Prigovor.ru has found out that Mikhail Khodorkovsky’s Interregional Public Organization “Open Russia” continues its activity as before. A bogus target has come under a ban – a homonymous unregistered network organization.
Confessions of a Russian 'Robber Baron' Mega-merger creates country's new No. 1 oil firm led by billionaire tycoons
By David R. Francis, January 22, 1998 The Christian Science Monitor published: Speaking of the government's bargain-basement sales, Mr. Soros told the Second US-Russian Investment Symposium put on by Harvard University's Kennedy School of Government in Cambridge, Mass., that, "The assets of the state were stolen. It was quite repulsive. I didn't want to have anything to do with it."
Paradise not lost for Khodorkovsky and Nevzlin
Prigovor.ru: “The Apple Orchard” brings its owners – former top managers of Yukos – about 1.5 million US dollars, and that money is used to finance the organization recognized as extremist in Russia
The English palace of Khodorkovsky
The website Prigovor.ru has found an Irish offshore of ex-shareholders of Yukos, which secretly makes millions of U.S. dollars in Russia. Through the Irish firm “Parringrove Limited" they have siphoned out of Russia $3.5 million of profits from leasing mansions in the community Zhukovka.