On this day, Yukos was caught in an effort to bribe British police

The private intelligence network “ISC Global”, created by Stephen Curtis with the money of fugitive oligarchs, got into a jam connected with corruption scandal. The website Prigovor.ru reminds its readers of what happened on June 2, 2006.

On this day, on June 2, 2006, a scandal erupted in Great Britain – the British newspaper “The Times” in its article said one of the British detective agencies working at the behest of rich clients from Russia, had paid money to one police officer from the extradition department for sensitive information connected with efforts by the Russian law enforcement agencies pertaining to bringing back fugitive tricksters from London to Russia (See the article “Detective accused of taking bribes from Russian exiles).

“Anti-corruption detectives are examining documents detailing the client accounts of the ISC Global (UK), a London based security firm at the center of the investigation. The financial dossier, seen by The Times, shown that ISC was paid more than 6 million pounds from offshore companies linked to the most vocal opponents of President Putin of Russia”, reported the author of this media outlet Michael Gillard.

“From 2001 and 2005, ISC provided a variety of specialist security services, including “monitoring” of Kremlin’s attempts to extradite key clients to Moscow, where they face fraud and tax evasion charges”.

According to these documents, the newspaper went on, ISC paid on the whole 20 000 pounds to a recipient codenamed Noah. “The Times” assumed that under this penname could hide Detective Sergeant Gary Flood from the extradition police unit that was relegated to other department because of the arisen questions to him”. 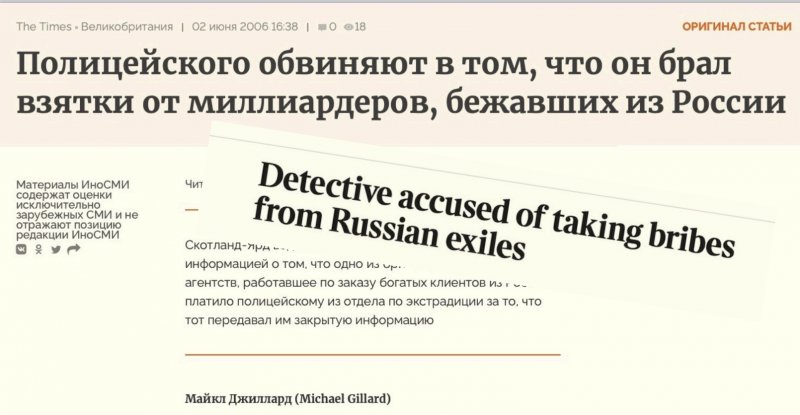 It’s important to indicate that that the paper began litigations with the policeman. In May 2007, the policeman Detective Sergeant Gary Flood filed a case in connection with the article that had been published on June 2, 2006, under the title “Detective accused of taking bribes from Russian exiles”. However, the newspaper “The Times’ defended this assumption, insisting that the editorial board could prove the truthfulness of this article in the sense that the actions of Mr. Flood were under police investigation, and there were reasons warranting this investigation.

In September 2007 the newspaper “The Times” was informed by the law enforcement officers that “the police investigation is over – there will be no criminal or disciplinary proceedings”. The information litigation between the policeman and the newspaper continued and was ended only in 2013. (См. Gary Flood v Times Newspapers Ltd)

The editorial board of “The Times” informed its readers about the results of the defamation actions in December 2013. But all this was centered, more likely, on such question as the future of the policeman, freedom of speech and speed of considering the case by the renown Brutish justice.

As to Russia, the publication from June 1, 2006, attracted attention by other aspects, connected with information that the fugitive Russian con artists had not only laundered and siphoned the stolen monetary assets to foreign accounts, but also had actively dreamt and continue to dream, above all, about political revanche. And they don’t grudge money on that revanche, they created outside Russia not simply security structures, but real private intelligence networks. “ISC Global” was such a network.

This network was founded in 2000 by a lawyer Stephen Curtis and two private detectives – Keith Lindsey Hunter and Nigel Brown. They represented interests of a group of Russian billionaire-oligarchs, including Mikhail Khodorkovsky and Leonid Nevzlin. After the tragic death of Stephen Curtis in a helicopter crash in 2004, it became known that he had been a contact person of the British special services.

(See also the article “On this day, Khodorkovsky was ratted out”).

Moreover, the firm was engaged, to be honest, in political intelligence. The same British newspaper “The Times” in the article entitled “British lawyer hatched Putin smears” directly indicated that “ISC Global”, at the behest of Russian oligarchs, had been preparing a conspiracy against the Kremlin, and for that purpose a collection of damaging materials had been ordered in connection with 11 senior Russians – from minister of defense to billionaire Roman Abramovich.

PLUMPED IN DIRTY GAMES OF THE BRITISH

All in all, it meant, first, that the whole stock of very serious and valuable information about dirty and shady activity of Mikhail Khodorkovsky’s empire went to a British dossier. And, second, Yukos fugitives, like the ordering customer of serial murders and attempted murders Leonid Nevzlin , actively, and Khodorkovsky in absence, got into dirty games of British special services. In fact, inside “ISC Global” Stephen Curtis launched another structure, connected with private intelligence activity – RISC Services Limited. It was closed down on September 18, 2007. It “suffered a setback” not only because of providing dubious intelligence data to one of the countries in the Middle East - informants for money told to spies what they wanted to hear. The firm became also famous because it actively worked with the traitor on the payroll of the British secret services Alexander Litvinenko. The Office of the Prosecutor General of Russian even checked information about possible involvement of Nevzlin in the death of Litvinenko, the more so, as Nevzlin himself had announced to the whole world about his contacts with this “dissident”. 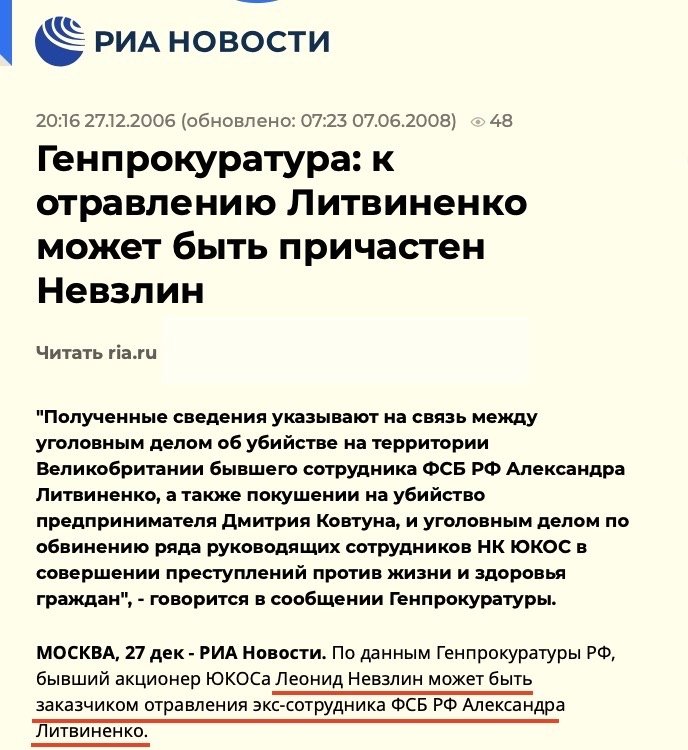 Litvinenko and Yukos were ratted by the Brits themselves – they are accustomed to sell for scrap used materials. (См. Стенограмма показаний Кита Хантера)

In particular, Keith Lindsey Hunter gave a very telling evidence during the hearings within the frameworks of the open investigation on the case of Litvinenko’s death. According to the testimony of the Brit, Litvinenko, through his own channels, had been acquiring secret information connected with Yukos and Mikhail Khodorkovsky.

Keith Hunter, substantiating the necessity to cooperate with Yukos, told that the purpose of RISC Management Ltd had been to collect, for former employees of Yukos, information “necessary for opening bank accounts in Great Britain”. Everybody believed them. For such consultations, which is strange, celebrated British specialists from the banking and finance sphere, for some reason, were not suited for Yukos. Perhaps, the reason was that, apart from consulting in the sphere of security, the British joint optionally was involved in recruiting activity.

PLAYED THEIR WAY INTO THE ROLE OF POLIZEI-POLICEMEN

In any case, certain Russian citizens, who had contacts with the mentioned “private organization” from London, after contacts with “well-wishers” recalled a notice to Article 275 of the Criminal Code of the Russian Federation (High treason). The notice gives a chance to correct everything, in case a citizen voluntary report “to the proper quarter” about moves of foreign recruiters. The criminal Leonid Nevzlin and the criminal Mikhail Khodorkovsky ignored this notice in the Criminal Code, and initially started to finance various radical group planning to destroy Russia, and up from February 2022, they have openly come out against constitutional order of Russia, and they have been doing this for real, as rabid polizei-policemen. They have been working off in order to keep the stolen assets”, notes the website Prigovor.ru.

(See also the previous article “On this day, Khodorkovsky's sect got off into hysterics”. Permanent lie of Sabine Leutheusser-Schnarrenberger. Monthly expenses of two billionaires will be limited to three minimum monthly wages. The website Prigovor.ru reminds its readers of what happened on June 1, 2005).

Читать на Русском
#дело юкоса#YUKOS case#методы ЮКОСа#YUKOS methods#Великобритания#Great Britain #Nevzlin Leonid#Khodorkovsky Mikhail #Curtis, Stephen
Popular articles
Ahnenerbe of Khodorkovsky
The Foundation “Future of Russia”* of Mikhail Khodorkovsky ** has issued a Russo-phobic manifesto “Russian Chromosome” and is pushing ideas of “new racism” directed against the Russians. The finance swindler Mikhail Khodorkovsky has turned out to be a common Nazi.
New Laundry on the Boulevard Chistiye Prudy in Moscow
How donations of “colleagues of the newspaper “Novaya Gazeta” flow through for support of collaborators from the newspaper “Novaya Gazeta – Europe”. $25 thousand from “Human Rights Foundation”. A Swiss purse of “friends”.
Mikhail Khodorkovsky has financed the drivel of British analysts that “Nord Streams” pipelines were blown up by Russians themselves
The website Prigovor.ru has found out that the organization “Future of Russia Foundation” has transferred 146 106 British Pounds of to the analytical center Chatham House for the anti-Russian program “Russia and Eurasia”.
Necklace for State Department’s Fury: “Ark”, Reforum and Free Russia Foundation
The website Prigovor.ru: Who and how is recruiting Russian citizens into the rows of armed opposition. Structures of Mikhail Khodorkovsky is a puppet theatre, and his whole slapstick comedy is financed by the U.S. State Department through funds of Natalia Arno.